Create music for modern performances and recordings, and establishing a creative presence while maintaining a full-time career in technical consulting.

Aaron Alter uses Sibelius for its versatile and intuitive scoring and notation tools to speed up his music composition and expand his second career as a composer of new music.

Aaron Alter is a composer. His pieces have been played all over the US and Europe. His online presence includes Facebook, SoundCloud, ReverbNation, and a website where followers and fans can find his music and keep up with his next performances. He is also a board member of the Carlsbad Friends of the Arts in California.

Not bad for a few hours a week composing music.

Aaron uses Sibelius to speed up score creation, allowing him to expand his creative potential in addition to his “real world” career as an established software and engineering consultant with his own firm.

“I wouldn't be able to compose without Sibelius,” Aaron told me during a conversation. “When I first learned composition, we had to write everything by hand, in pencil, ink and manuscript paper.”

Aaron grew up in Chicago, where he grew up playing piano in jazz and rock bands. With saxophonist Fred Anderson, he explored new sounds and harmonies that influenced his compositions, including his first one titled Aaron’s Tune.

At Northwestern University, Aaron immersed himself in the European classical tradition in addition to modern American music. He went on to earn his MFA at Princeton University. From there, he earned a fellowship from the Boston Symphony's Tanglewood Festival as well as a grant from the New York State Council for the Arts.

“Between my career and other obligations, I have maybe an hour during the week and one weekend day for music.” This is true for many musicians. It’s more than a hobby, and modern technology has unleashed people like Aaron to pursue their passions. “Without Sibelius, I couldn’t write music at all. I couldn’t do this.”

The way music was written, in pencil, it took forever. Every mistake had to be fixed by hand. And once the score is done, the real work begins.

Alter refers to the process of creating music in the days before software. Sibelius is unique, says Alter, in its ability to ‘get out of the way’ and let him create.

“The way you can drag slurs and make multiple edits is essential,” Aaron told me. The versatility of Sibelius is critical to making changes quickly, and one of his most-admired features is the ability create dynamic markings and professional scores and sheets. This means Aaron can get music in front of players more quickly, and tailor it with the dynamic markings and nuances that performers and directors need.

Alter’s Solar Rays is a perfect example—this jazz-inspired piece was initially composed for piano, violin, and ‘cello. But when he got in touch with Gene Pritsker, co-Director of the NYC-based Composers Concordance, he got the unexpected chance to rearrange the piece for big band. Recently, they had the amazing opportunity to perform it live at The Cutting Room in midtown Manhattan. 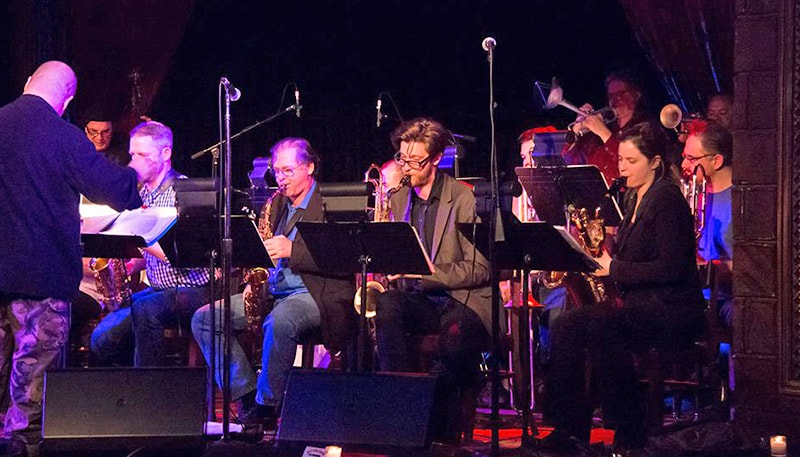 Sibelius functions that have made Aaron Alter’s compositions possible include the ability to make multiple edits across staves and sections, publish different orchestrations, its quickly-accessible keyboard commands, and its customizable layout capabilities. Another feature that players enjoy is the page turns, which Aaron uses to assist the players in performing a piece accurately.

One of the players at The Cutting Room wanted an autograph on his part. Sibelius lets me create scores that look detailed and professional, more easily.

Because of Sibelius, Aaron Alter has been able to jump-start his composing career. While his older compositions were created in an academic style, his recent works explore new boundaries, and bring a new style and energy to his music.

His newest pieces make up the "My New Beginning" series, and include pieces like Homage to Josquin—a magical work for two flutes, piano, electric bass and drums. It is inspired by the music of the late 15th - early 16th century master Josquin des Prés. The piece was recognized as an Honorable Mention for the 2016 American Prize competition in the Chamber Music category.

Aaron believes music, as a means of communication with performers, should be created in a way that can be easily read to clearly communicate the message behind the music.

That’s what music is—a way of telling stories, whether it’s for sharing an emotion, for remembering a friend, for celebrating a life well-lived, or for pursuing a passion. Aaron Alter is doing that. And Sibelius is helping it happen.