For a band with a busy live concert schedule and global ambitions, it is critical to have the ability to record and produce music with tools that capture the highest quality audio, with features that are flexible and easy to use.

Pro Tools is used by bands all over the world to capture their sound in live and studio settings, edit and mix their tracks, apply effects and MIDI instruments, and quickly publish songs online for a rapidly growing fan base.

Argentina's music scene demands much more than one article. Built upon its rich cultural history, a myriad of wind, percussion and string instruments, and a tradition of borrowing and re-creating musical styles from outside the nation, the state of Argentina's music could fill textbooks and support entire university programs.

One genre, rock and roll, draws from the 1960s British invasion, classic 1970s rock and prog, 1980s metal, 1990s suburban rock, and modern electronic influences. The result is a wide range of styles that range from traditional pop rock to sonic walls of blistering guitars and EDM elements, sung in Spanish, in clubs, arenas, garages and bedrooms across the country, and often wrapped up in the term rock nacional, or "national rock". It alone deserves a book. 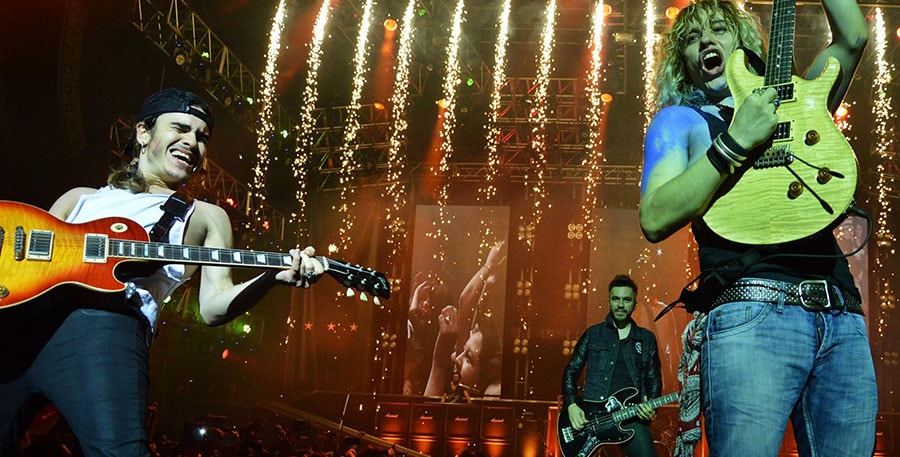 Airbag defies that labeling. The band has been exploring the limits of Argentina's rock scene for nearly two decades. The band goes back literally as far as they can, being brothers. Patricio, GastÃ³n, and Guido Sardelli formed the band in 1999 and published their first album, Airbag, in 2004. Since then they've released six studio albums and one live, Samsara in 2012.

GastÃ³n Sardelli is the bassist for the band, and he is largely responsible for their recording sessions, editing and mixing, and developing a sound that recalls the global currency of hard rock while adding an energy that is unique and personal. The band's style is energetic and conveys a sense of fun and accessibility for audiences. 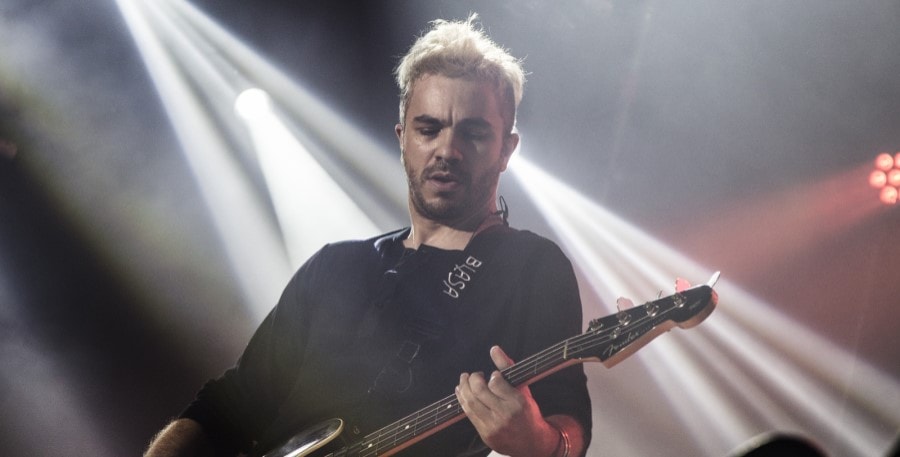 
Sardelli uses Pro Tools as his music creation software, and able to mold the band's sound because of its completeness and ease. "The first thing I love about Pro Tools is when you're looking at the mixing window, you have the console, the inserts, the inputs, the outputs, the fadersâit's very intuitive for a musician. It's the entire studio in one screen." The layout is important to Sardelli because more bands and individual artists create their work themselves, from start to finish.

More and more, artists are recording themselves. We know what we want, and we know how to get it. 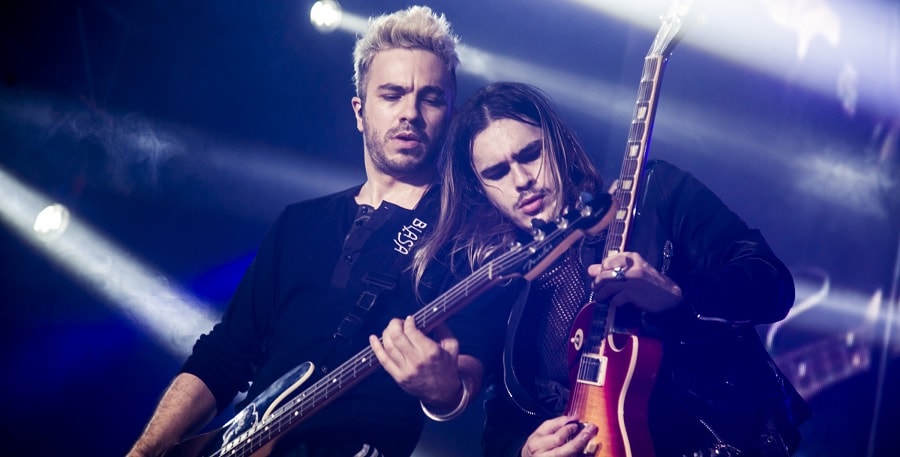 
Another feature that draws the Sardellis to Pro Tools is the audio quality, which is readily apparent in their work. "In recording today, you can get the high-quality audio with digital technology, and it's more organic. All the frequencies of all the instruments. If you solo the drums, you can sometimes still hear the bleed from other instruments, like the guitar. It is easy to capture a very clean sound."

The brothers capture Airbag's lively sound by combining the old school with the new, recording the entire band together as much as possible. "The whole recording is more organic, more alive, with more textures and I don't know if it's the way we collaborate during the session, or the CPU, but proper equalization does the job." 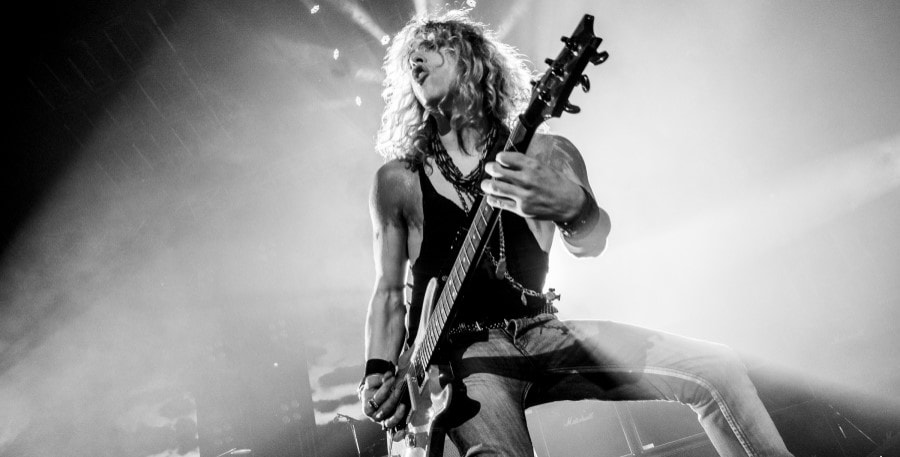 
While the audio quality of Pro Tools is important to the band, GastÃ³n is also focused on finding new ways to get their music to their dedicated fans. "The industry is changing every day, and production requires more knowledge of the process. The good thing as musicians and producers is that we can upload music to Spotify, and we don't have to rely on one man."

Another factor in modern music is the capacity to go beyond album production, creating concert videos for YouTube (with all of the audio recorded in Pro Tools), organizing tours, and maintaining a social presence, and Airbag is active on all those fronts. 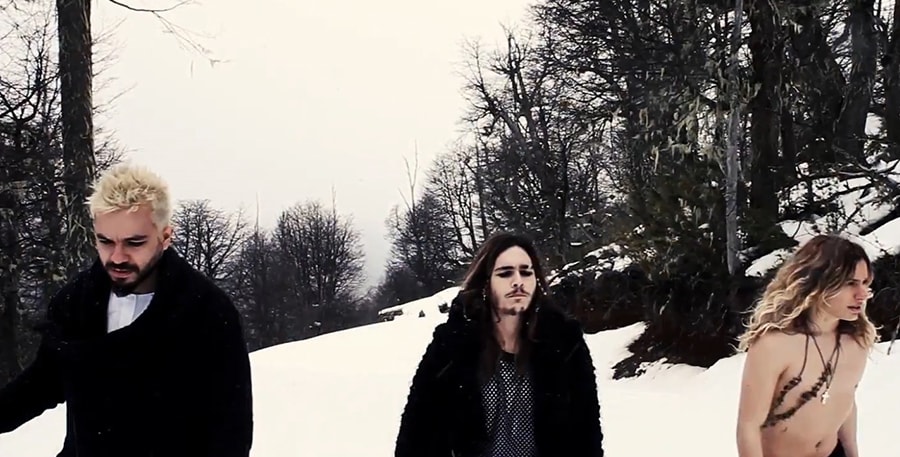 We started directing our own productions as well, making movies, our documentaries, and our concert videos. We try it and we just do as much as we can on our own.

When it comes to equipment, GastÃ³n describes a somewhat traditional hardware setup in the studio, with a mix of analog systems and digital technology. "We use analog hardware for audio because we like the sound of the analog inputs and the preamps. We like the combination, when we play live we try to use a mix of analog hardware, usually the mixer, compression with the Fairchild 660, and there are plugins that emulate these effects, but we use it live and in the studio." 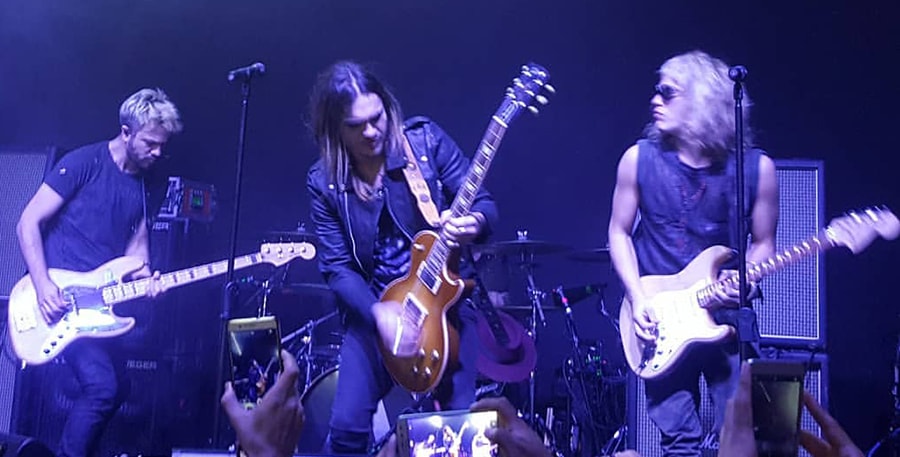 When not touring, the band records regularly, which is how they've built a finely-honed level of musicianship and sound quality. "One thing that happens a lot is you capture the spontaneous performance, many times you play something, and we usually start editing a song right away."

Sometimes you get a take where you captured a feeling, like you are having some fun, and those are the performances we keep. 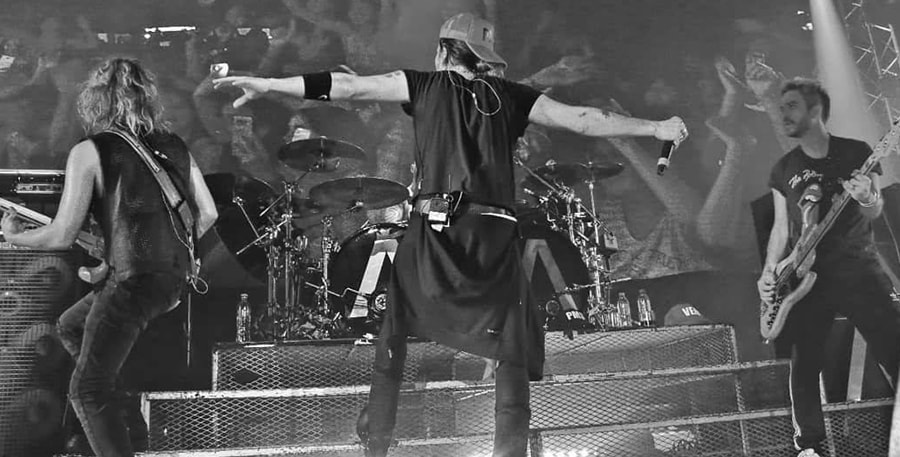 Even though they are brothers, the Sardellis take different approaches to recording their parts. "With drums and bass there aren't too many takes, because we want the song as organic as possible, but with guitars it's differentâwe want to get the licks and the phrases just right. It's particular for every musician. The guitarist, Patricio, also sings, and he's very talented. Guns n' Roses is one of our influences, and guys like Slash are the reason we play guitar." 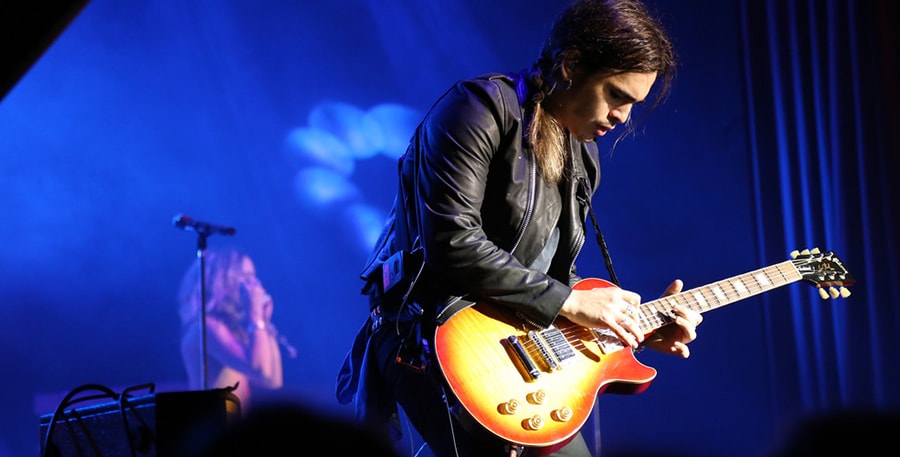 
Editing their sessions is where GastÃ³n really relies on the power of Pro Tools and its timeline functions. "You understand the power of the tracks, the volumes. For example, the Mocha effect. I really like the Expand tool. I also like the time compression, the elastic time. We can automatically bypass effects. The possibility of the offline bounce, which saves a lot of time, because we often want to get an idea quickly, sometimes that idea goes away."

In Pro Tools, it is easy to understand exactly what's happening. It helps drive the artistic process. 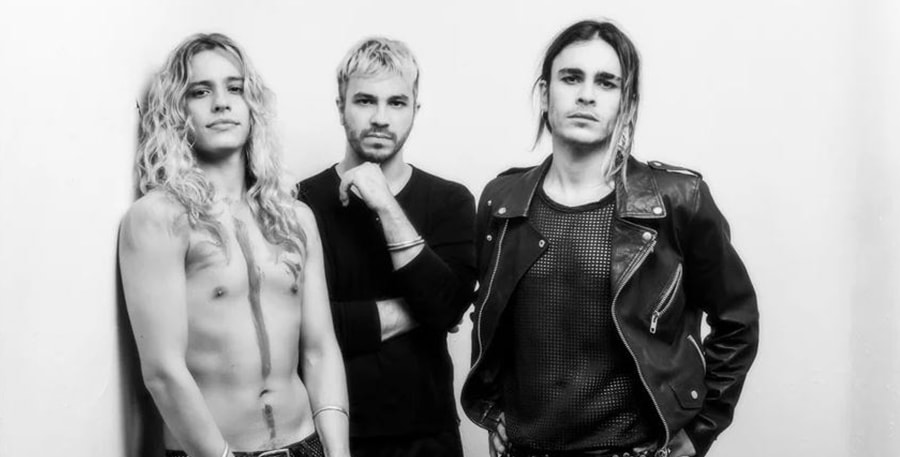 Not only does Pro Tools help drive the editing process, but when writing music and creating ideas, the speed of the software becomes critical. "I use the MIDI instruments like the piano, and strings, and that's important for a musician, because you need to record an idea quickly. You don't have time to write everything out, you just have to turn on the computer and plug in, and you can record an idea. We can take different sections of music and later we can record the song for real."

Sardelli also uses Pro Tools to record Airbag in live settings, including a recent concert with an orchestra. "In November 2017 we recorded in an arena in Buenos Aires to 8,000 fans, we played with an orchestra, and it was all acoustic instruments, with more than 50 musicians on stage. We recorded the guitars, drums, and the strings live. We love both modes of recording, whether in the studio or the live venue."


Airbag continues on its mission of bringing Argentina's rock sound to the world, playing festivals and numerous concert venues. "Estadio Luna Park is an arena for 8,000 people. We also have a Mexico tour, and Peru. In Latin America when you tour it's usually a series of single shows, or three or four, and then you go out again. We played the Vive Latino Festival, and the Coordenada (this will be 19th october 2018) Festival in Mexico." 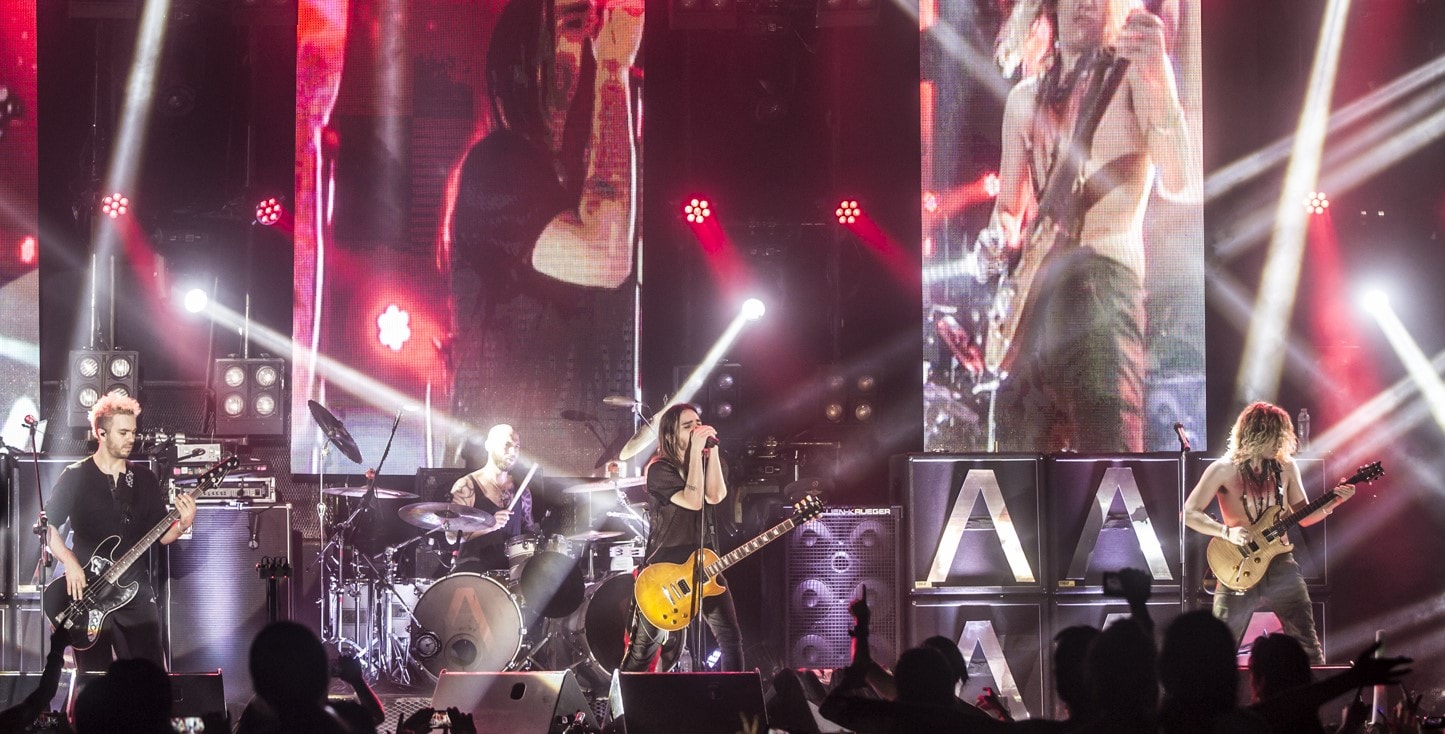 
And beyond that, the band is also soon to be found in the digital streaming realm as well. "We are doing the audio for a documentary on Netflix. Nobody thought it would work with a concert involving Beethoven, Mozart, and our songs, but it sold out and we made a movie about the process. What we are doing is all in Pro Tools."

Listen to Airbag's new song, Como un Diamante (Like a Diamond) from their upcoming album