Post-production supervisor Tim Cunningham needed a workflow with enough storage and collaborative capabilities to meet the post-production needs of a fast-turnaround episodic documentary.

Hosted by basketball great and larger-than-life personality Charles Barkley, American Race is an episodic documentary that explores race in America. Four hour-long episodes that aired on TNT in May 2017 examine contemporary race issues from different angles and through the lens of people with vastly contrasting perspectives.

Barkley, who’s also an Emmy® Award-winning basketball analyst, traveled to Baltimore, Atlanta, Los Angeles and Irving (Texas), interviewing a cross section of people and exploring topics like police and race relations, being Muslim in America, immigration issues, and Hollywood stereotyping. Not one to shy away from controversy, he had open and probing conversations, spurring debate about what it means to be a minority in the U.S. today and the often difficult repercussions. 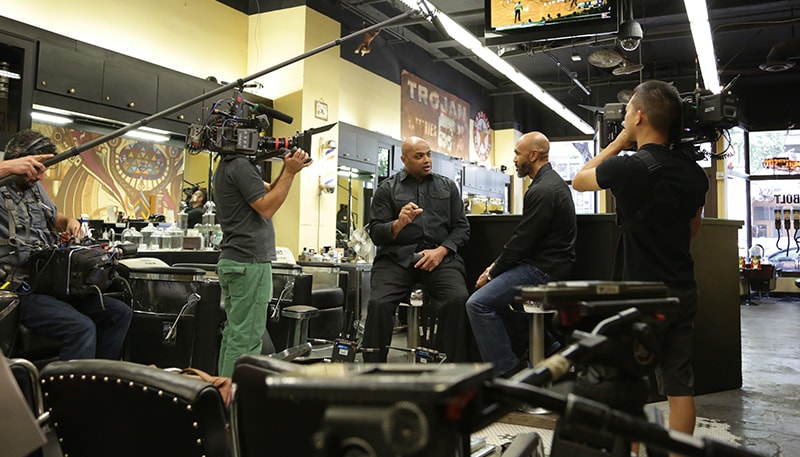 Episodic documentaries have unique challenges and their own production rhythm. With lots of live footage, hours spent in the editing room and extensive storage requirements, they can also be stressful for post-production supervisors who must ensure that all technical and artistic components come together for a synergistic and compelling story.

Cunningham built the entire American Race post-production workflow based on the needs of the project, choosing the equipment and the software, and working to ensure that the post process ran smoothly. It’s a high-pressure, high-stakes position and the last thing you need is to question your equipment. Cunningham and his crew had the added challenge of time, facing an ultra-tight production schedule due to the show’s airdate.

“The reality of docu-style storytelling is it’s figured out in post,” says Cunningham. “You don’t really know what you’ve got and where the story will take you until you’re in the editing room.” For this type of production, archival footage is brought in as backstory—the background critical to supporting the narrative that emerges. It’s also where production tools are critical to merge the live action captured with archival footage from a range of sources. 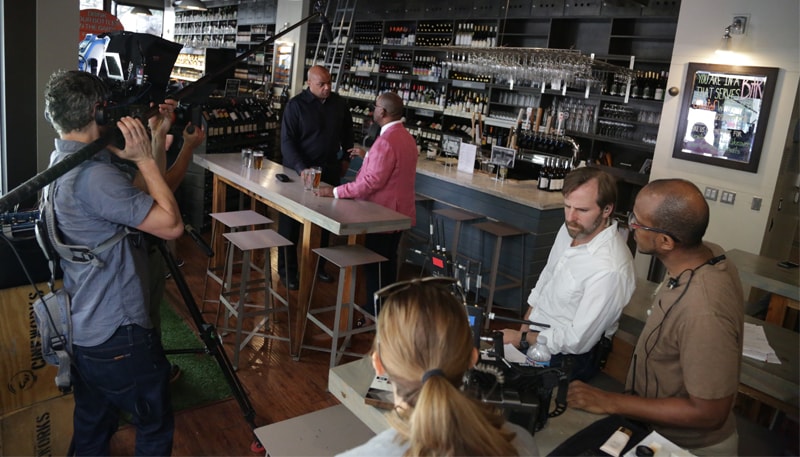 Avid Media Composer allowed the team to cut each episode with ease and speed. Driven by Avid’s MediaCentral Platform, the software allowed native support for all media formats, with Avid Dialogue Search to find the best takes and right clips fast, and perhaps most important: flawless collaboration. “Media Composer doesn’t slow anything down or get awkward,” describes Cunningham. “With any other non-linear editor you can only have one person working in a project at a time so you need to track who’s cutting what in which version of a project, then hope to God you grab the right cut from the correct project. Trying to keep everyone in sync is a huge mess and very unwieldy. With Media Composer there’s just one project, with people working in bins. It’s simple. It’s fluid. It’s easy.”

Given American Race’s production schedule, working in concert was more than nice to have—it was essential. “It was a very collaborative process with a lot of people working at the same time and often all in-house accessing central storage,” Cunningham says of the production. Due to the tight timing, each episode was also labor intensive. At a minimum, there were two editors and a story producer per episode working with the same footage at all times. There was also a team of assistant editors and crew pulling archival footage. As each episode began to take shape, it was usually broken up by act or ‘pod’—so each editor would focus on a certain aspect of the show. Then the acts were edited into a seamless, cohesive episode.

The series was shot on ARRI cameras, including ALEXA cameras, unusual for docu-style programming. Cunningham calls it a luxury to work with such high-end cameras. It brought freedom from dealing with highly compressed files but it also meant having to manage massive files after offloading at full resolution. 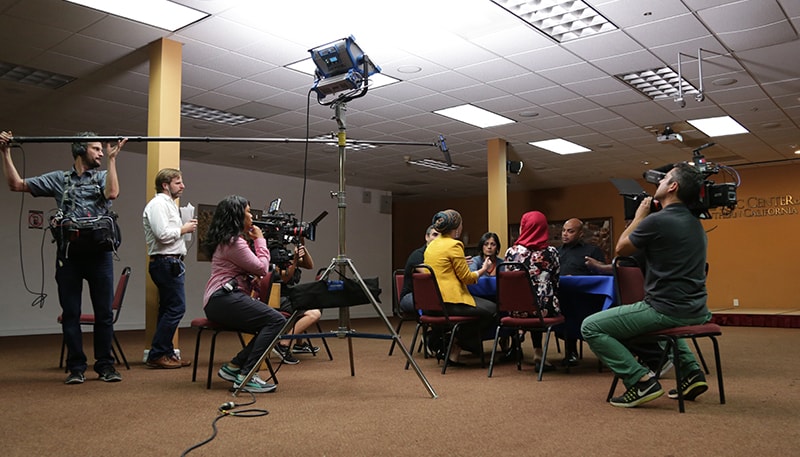 The other critical aspect of the workflow was storage. With lots of experience with Avid shared storage, Cunningham chose Avid NEXIS, the industry’s first software-defined storage platform, for American Race. The powerful system delivers not only true storage virtualization but also the flexibility and control that were critical for the project.

Given that a single day could generate multiple terabytes of footage, Avid NEXIS’ storage capacity of up to 60 terabytes was critical. The workflow relied heavily on the size and speed of NEXIS storage to ensure the post team could meet tight network deadlines. Avid NEXIS | E2 was isolated for editorial and for what Cunningham calls ‘heavy footage.’ Avid NEXIS | PRO was used for nearline functions, enabling multiple editors to access files for a scalable and secure real-time workflow. Having the two solutions allowed them to do more and do it faster.

The extra speed of Avid NEXIS also allowed the post team to work in higher resolution for editorial proxy, which, for Cunningham, was critical. “For the executive producers to get a real sense of the show when you send cuts to network, it’s best to show it in the highest resolution possible. In the past, we were limited by size and speed and we had to use more heavily compressed files, which would pixelate. Now those shackles are off.”

The way Avid NEXIS is engineered also enabled the team to run several processes in parallel, rather than in the linear fashion of older systems. “It allowed us to shrink the time it takes to ingest footage to one quarter of what it was before,” explains Cunningham. But perhaps most significant benefit? advantage? was the platform’s reliability. “I don’t have to worry about it,” says Cunningham. “It sits and it works—the way it’s supposed to. Not having to worry is a huge benefit.”

Cunningham also points to Avid NEXIS’ more virtualized operation as a bonus. “It’s a single solution where it’s easier to mix and meld together,” he says. “In the past, when we had to add hardware the downtime was significant. With Avid NEXIS, the process of expanding storage capacity is more seamless.” While it wasn’t a factor for this production, Cunningham revealed this ease of expandability factored into the purchase decision. And it may well be needed the next time. 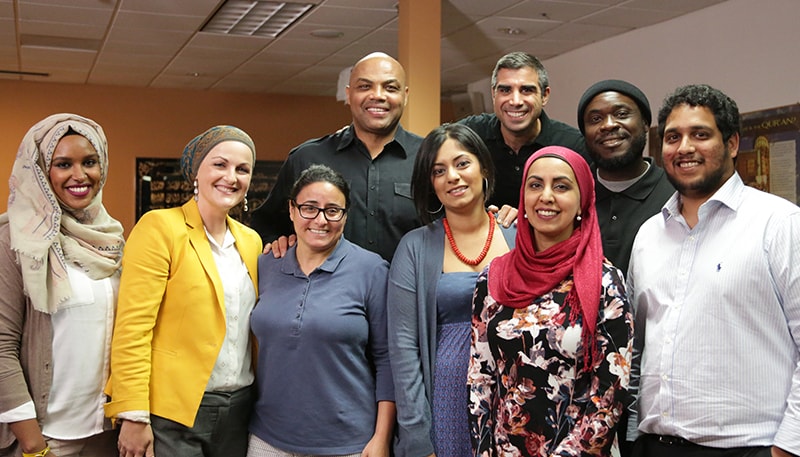 It’s said that with documentaries, editors are more writers than editors. The American Race post-production workflow gave power to discovery and the tools to shape the narrative into what was seen on-screen—tools that get out of the way and allow you to be creative.

Hear more about Doc Shop Productions’ workflow, the role Avid’s solutions play, and why this is the golden age of documentary television in this video interview by our partner Cutting Edge Audio & Video: