From Orchestral to Urban, Pro Tools Delivers for Brian Tyler

Compose everything from orchestra to rock to hip-hop scores using industry-standard creative solutions.

Renowned composer Brian Tyler relies on Pro Tools for every aspect of the writing, recording, and creative process.

Brian Tyler is one musician who simply won’t be pigeonholed. His musical history includes stints in numerous orchestras, choirs, and ensembles, as well as in rock bands with the likes of Elton John and Slash. As a first-call film composer, he’s equally comfortable writing for an orchestra or a hip hop score, and Pro Tools is the only software versatile enough to keep up.

“People ask me what my main instrument is and at first I think of piano or guitar,” he says, “but really, for the past twelve years, Pro Tools has been my main axe.”

In the fast and furious world of film, Tyler relies on Pro Tools for every aspect of the creative process. “As a composer and as someone who records audio, Pro Tools is what makes it possible to combine those worlds,” he says. “I’ve got one Pro Tools rig that’s running all my pre-record stuff. That system can have upwards of 180 tracks going at once. Then, when I’m recording an orchestra, we’re recording another whole litany of tracks. And what we’ve done is, I’ve got another Pro Tools rig out on the podium next to me while I’m conducting.

“At the next phase, we set up all the Pro Tools rigs on the mix stage, and mix the movie in 5.1 surround. Then we use Pro Tools again to master the recordings. Basically, Pro Tools is the unifying force in every score I do.” 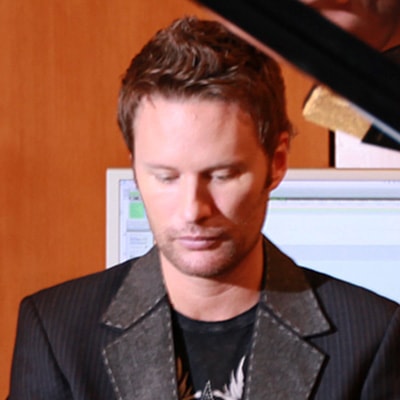 Although Tyler has long relied on Pro Tools for recording and mixing, he’s even more excited by the new features. “With the new plugins, Pro Tools is now really a composer’s tool,” he says. “The chart functions are really cool. You can just be cruising along and literally do anything, from composing lead lines and charts, to printing out multiple scores and giving them out to the players. And you’ve only had one program open the entire time.” For a busy composer there’s nothing more important than technology that works with, rather than against you, he observes.

“The intuitiveness of the program makes it easy to move quickly from that first idea to the final product. The musicality of the program really shines—you really forget you’re working with zeros and ones.

People ask me what my main instrument is and at first I think of piano or guitar, but really, for the past twelve years, Pro Tools has been my main axe.

“Features like the Transposition and Elastic Pitch functions are indispensable—being able to manipulate sounds with the same ease as MIDI is just amazing. In film composing the big challenge is that you’ve got an outside source of info coming from the producers and directors in the studio,” he adds. “You get a lot of ‘can you make this faster or slower, can you do this or that.’ Now, with all the new features in Pro Tools, it’s easy."

“I’m sure that as time goes by I’ll look back and wonder how in the world I ever got along without Pro Tools. Pro Tools is the tried and true aspect of my rig—it’s always there, whether I’m doing a piano piece, a hip hop score, an orchestra recording, or a drum-and-bass track.”