Avid VENUE | S6L Hits the Road With Christine and the Queens

To create and deliver high-quality, live sound at various venues for Christine and the Queensâ world tour

HÃ©loÃ¯se Letissier, known to her fans as Christine and the Queensâor the newly introduced Chrisâis no stranger to breaking the rules. Since arriving on the music scene with her debut album Chaleur Humaine in 2014, the French singer has pushed pop music boundaries by experimenting with new sounds, climbing hundreds of chart places after a breakthrough performance at Glastonbury, and reinventing her musical persona to mark a new era, both professionally and personally. Her artistry is head-turning, dynamic and innovative. In fact, it turned the heads of front of house (FOH) engineer Julien Decarne and monitor engineer Christophe Rousseau, who both joined Chris on the world tour of her second album, aptly named Chris, in October 2018. 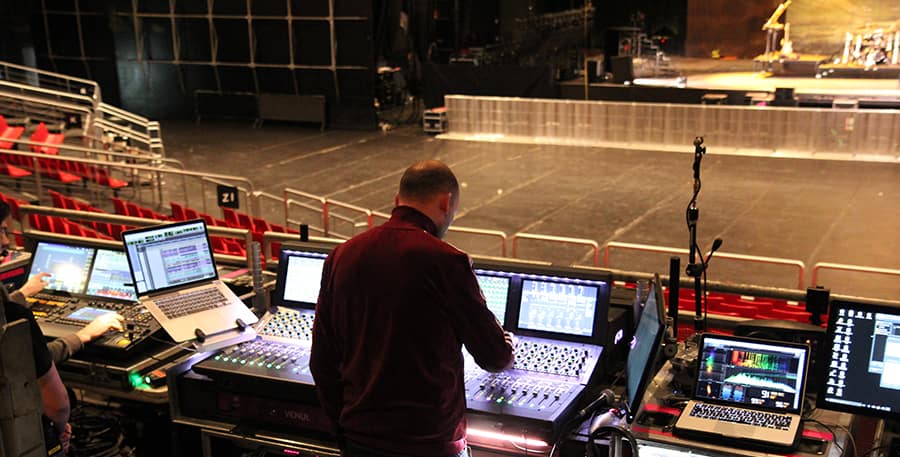 Julien Decarne has worked with Chris since she toured Chaleur Humaine in 2014. The tour was a breakthrough for Chris, as was the music she performed, which explored synth-pop melodies, electropop beats, and experiential orchestral arrangements. With this diverse musical palette, Julien had a complex task at hand. But his relationship with Chrisâ musical director, Bastien Doremus, enabled them to deliver a successful tour that showcased Chrisâ unique sound to thousands worldwideâhelping put her on the platform sheâs on today.

Speaking of that first tour, Julien says, âIt was inspiring to see Chaleur Humaine come to life each night as Christine and the Queens took to the stage. Her vision came to life beautifully as, without fail, the atmosphere was electric. We carried that with us as we planned her second tour. We knew we wanted to replicate that same buzz, but also take it to another level.â

As with Chrisâ musical progression, Julien evolved his team by bringing in Christophe to mix monitors for the second tour. The pair originally met 10 years ago through Samuel Birais at French audio rental company Melpomen, who supplied them with dual Avid VENUE | S6L systems. Julien, Christophe, and Samuel worked together to develop a technical workflow that could seamlessly and efficiently deliver Chrisâ vocals and her bandâs sound. Not only did the system need to deliver exceptional sound quality, but it also needed to be intuitive and easy to set upâregardless of each venueâs requirements and challenges.

âOne of the main hurdles we had to overcome were the rooms themselves: the size, the ambiance, and the acoustics,â says Christophe. âNo venue is the same, so we needed a system that would be easy to configure and adapt to whateverâs thrown at us. We canât always prepare for this, which meant we also needed to record and pre-mix where necessary and begin soundcheck from the word go.â

Having used Avid VENUE | S6L live sound consoles while touring with French rapper Nekfeu as monitor engineer and with hip-hop group S-Crew as FOH engineer, Julien trusted the console to help them overcome these challenges on Christine and the Queensâ world tour. Itâs a console he knows well and uses with confidence. And by preparing the system in rehearsals before Christopheâs arrival in May, Julien ensured that when they came together, they could get started quickly and develop Christine and the Queensâ set with ease.

The Avid VENUE | S6L was a big asset to the overall production of this tour. The audio chain from preamp to EQâthrough to recording and processingâgave a faithful and dynamic audio performance, which we owe to the consoleâs ergonomic design and workflow capabilities. 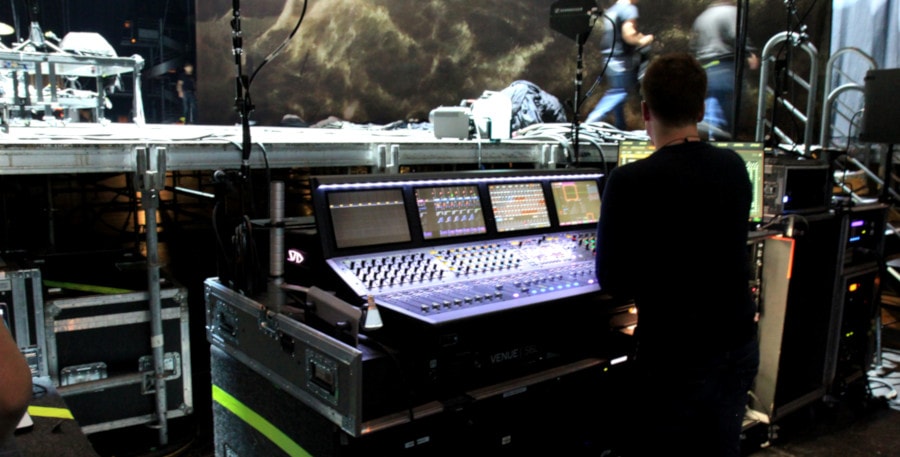 After travelling to Swansea, Wales for Christine and the Queensâ performance at BBC Radio 1âs Big Weekend festival in May 2018, Julien and Christophe were able to further refine their workflow and perfect the set in time for the tour in October.

Looking back at their time in the studio after the festival, Christophe says, âfrom June until September, we built the show with Bastien Doremus, using recordings from previous studio and live performances. So when we arrived on tour, there were few last-minute changes and hidden surprises. The bulk of the FOH mix was completed early on. Bastien edited the live tracks in Pro Tools for monitorsâboth in the studio and on the roadâseparately from FOH. This is where the consoleâs support and reliability didnât let us down when we finally came together on tour. It complements remote collaboration, so it was a perfect fit for us.â

âDuring our recording sessions at the beginning, I managed the in-ears and FOH mixes from the same VENUE | S6L console,â adds Julien. âAs well as helping us understand how Chris hears the music, it also helped from a technical standpoint to have consistency across our technology. Once we added another VENUE | S6L console for Christophe dedicated to monitor mixing, we were able to achieve a certain coherence between what the artist hears and what the audience receives. This is one of the key ingredients in creating a successful live music tour.â

Once all the preparation was complete, the next stage for Julien and Christophe was to take it on the road and put it into action. For both engineers, it was important to have a simple yet flexible live sound configuration that they could adjust according to each venueâs unique requirements. Moving from concert hall to arena, it was Christopheâs responsibility to ensure the ambient sound was perfectly balanced with Chrisâ vocals and bandâa tricky task considering the frequent changes between different venuesâ acoustics and audience participation. 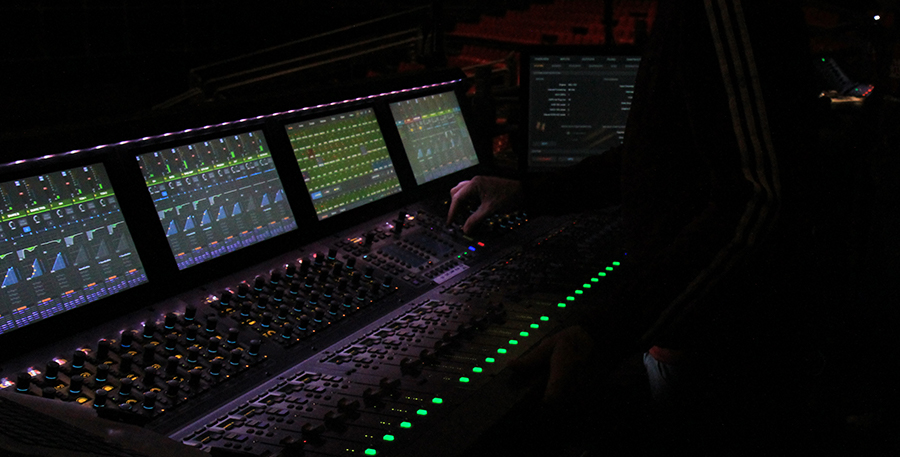 âI often had to retransmit the in-ear mix to complement the venue and audience,â says Christophe. âThanks to the Pro Multiband Dynamics plugin, I was able to shape and hone the sound Chris heard by selectively compressing or expanding the audio. Much of this required acting quickly during the live set as, even in soundcheck, itâs difficult to predict how the venueâs acoustics will change when hundreds of people come through the doors. We knew, however, that Chris favored a live dimension to the in-ear mix and S6L enabled us to execute that quickly, regardless of the venueâs challenges.â

As the tour progressed, Julien and Christophe turned to Vladimir Coulibre, sound designer at L-Acoustics, and added an L-Acoustics L-ISA immersive sound system to their Avid workflow for the last five shows. Together, the Avid VENUE | S6L and L-ISA systems elevated Christine and the Queensâ sound by adding multidimensional audio qualities to the entire concert experience.

A key benefit of Avid VENUE | S6L for Julien and Christophe was its Virtual Soundcheck functionality. Using pre-recorded Pro Tools tracks from the previous nightâs performance in place of the live mics gave them a head start as they set up in each venueâsaving valuable preparation hours. âWe recorded all the shows in multitrack in Pro Tools,â says Julien. âIt meant the sound was pristine during Virtual Soundcheckâfurther complemented by the wide array of compressors, EQs, delays, and other sound processors, which all helped us deliver the best possible sound.â

âIn my opinion, Avid VENUE | S6L was a big asset to the overall production of this tour,â says Christophe. âThe audio chain from preamp to EQ, through to recording and processing, gave a faithful and dynamic audio performance, which we owe to the consoleâs ergonomic design and workflow capabilities. Itâs powerful and effectiveâand I hope to work with it again on future productions.â