Maintain a focus on servicing the story and characters when working on large productions with dozens of crew members and hundreds of hours of media.

Media Composer | Ultimate video editing software is the most reliable and efficient way to collaborate and edit long form film and video productions. It provides advanced video editing, finishing, and delivery toolsâand the ability to share projects, bins, and mediaâso your team can complete projects faster, together.

Debbie Berman has been an editor on some of the biggest blockbuster movies of the last decade, including Spider-Man: Homecoming, Black Panther, and Captain Marvel. Berman is passionate about the editor's role in enhancing the storytelling process. "The editor is basically the guardian of the film; essentially everything comes through editorial, the sound, the score, the visual effects. So, you're the guardian of all of it, and you have to deliver the best film possible," explains Berman. "My focus is really all about servicing the story and the characters."

Berman relies on Avid's Media Composer video editing system to provide the tools she needs to be a creative storyteller. Her experience with Media Composer began about 16 years ago, when Berman was hired to work on Big Brother South Africa, and the show was edited on Media Composer. "I didn't actually know how to use Media Composer before I got the job" explains Berman. "They said 'This job is on Avid; do you know how to use it?' And I said, 'Of course I do!'" Berman jumped in to an incredibly fast paced show with hours of media to edit each day. Big Brother South Africa live streamed two cameras following everything that happened in the house. "Every day, we produced a 30-minute show of what had happened the day before," explains Berman. "Normally you would have four-to-six-weeks to put a show together; we had 24-hours. And, this was my first job!"

With a little help from her friends, she managed to master the film editing software. "I had a lot of frantic phone calls asking, 'How do you do this; how do you do that?' I remember I thought all the command button options were only what was defaulted to my on-screen settings; and then about an hour into the job, I looked down and saw they were markings on the keyboard, and it was one of the greatest moments of my life realizing I suddenly had about 100 more options." 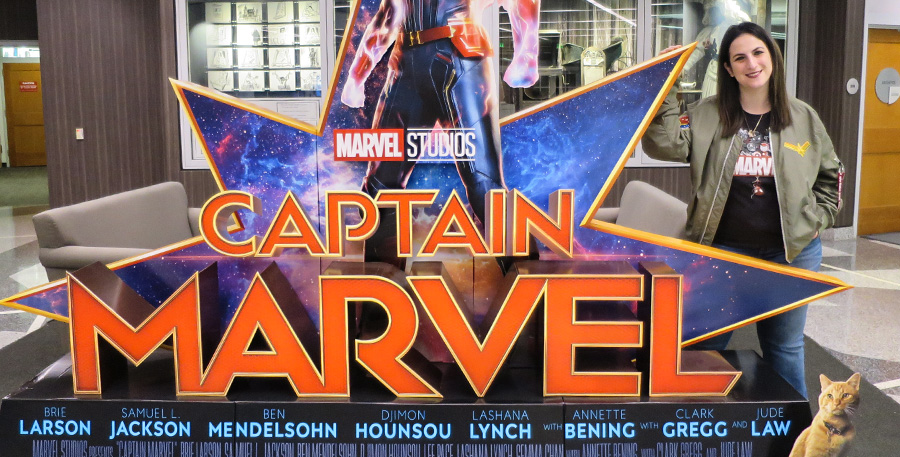 While Berman has used other editing workstations over the years, she keeps coming back to Media Composer. "I love working on Avid especially for the really big productions where you'll have 20 crew members sharing the same project, and you have something like 500 hours of media," explains Berman. "There's no other system that can handle that sort of media management with that number of users. It would definitely be a struggle to work on a film as big as Captain Marvel if it wasn't for Avid."

Spider-Man: Homecoming was Berman's first Marvel film. "That was the toughest film to get on because I didn't have any big credits at that stage." One of Berman's mentors, Dan Lebental, was working on Spider-Man, and while he put Berman's name forward, it still was hard to break through. "Everyone kept saying 'No'. But I didn't hear the negative, I just kept thinking to myself 'This is so great; we're talking about me working on Spider-Man!' The fact that everyone was saying no was a minor and annoying detail. I think that ultimately they felt my passion and decided to give me a break."

"What was important to me about Spider-Man is there's basically a stigma in the industry that women cannot cut big action sequences or films. I felt it was important to try to break that perception as much as I could. So, on Spidey most of my focus was on editing the action sequences." Berman brought her passion and creativity to the role. "There are a lot of moving parts in the huge action sequences, and sometimes the most challenging thing can be to make someone care. Sometimes a couple of frames can be the difference between something being hilarious or exciting, and being a little like, 'Eh'," explains Berman.

I love working on Avid especially for the really big productions where you'll have 20 crew members sharing the same project and you have something like 500 hours of media. There's no other system that can handle that sort of media management with that number of users.

"I use a lot of editing tools in service of enhancing the story, the character, or the timing, to be more comedic or more emotional or to pick up the pace. I'll retime the moments or the pauses between the lines or speed things up, so that it plays better comedically. I'm a big fan of the progressive timewarp."

Berman's next film was Black Panther working alongside Michael Shawver and Ryan Coogler. Berman joined Black Panther a couple of months into the making of it and brought a fresh perspective to the film. "Everyone else had been living with the script for a few months or years. They'd seen all the footage. They had information from older cuts. I saw the film with no prior knowledge. So, my main role was streamlining things, making sure there was clarity, making sure things moved. There are a lot of characters in Black Panther; how do you spend enough time with each of those multitudes of characters so that they have depth and you get to know them, but not too much time that you veer off on tangents and lose the momentum of the entire film," explains Berman.

Berman notes that on a film like Black Panther where they had 500 hours of footage, the Media Composer ScriptSync feature was crucial to her editing process. "I could just pull up ScriptSync and instantly access the take or clip I needed. It enabled me as an editor to put all my focus on being a creative storyteller as opposed to spending hours looking for things," states Berman.

The campaign for Captain Marvel

While Berman was working on Spider-Man and 'living her dream', Marvel announced the Captain Marvel movie and Berman began a campaign to get hired. "Captain Marvel was Marvel's first female-led film; and, I knew I had to find a way to get on it." Determined to show her passion for the job, Berman bought a Captain Marvel t-shirt and wore it to work every time she knew that the Marvel executives were coming in for editorial sessions. "I wore my Captain Marvel t-shirt to the point where it became a running joke with the crew. If I was wearing the shirt, they knew that meant that the execs were coming in," adds Berman.

The editor is basically the guardian of the film; essentially everything comes through editorial, the sound, the score, the visual effects. So, you're the guardian of all of it, and you have to deliver the best film possible. My focus is really all about servicing the story and the characters.

'Queen of the Split Screen'

Berman used a host of tools and techniques to achieve the emotion she was looking for in Captain Marvel. "Sometimes, during visual effects reviews, a shot would come up and the director asked what's the visual effect in that shot, and people would point out there's a re-time, there's a split screen, or some other effect. After several rounds of that they finally realized how much I was manipulating the footage."

"So, they started calling me the Queen of the Split Screen because I love things to be perfectly timed and I'm very involved," continues Berman. "I also love working on quick temp comps in Avid. It's super easy, exercises another part of your brain, and is a great way to get a rough idea of your intentions across, which can then be taken to a higher level by the visual effects team."

Berman is living her dream, but she'll be the first to tell new and aspiring editors that it is a competitive industry. Her advice is to find people who will mentor you and keep your spirits up and remember to celebrate every small victory. "I think sometimes people accomplish something, but all they can see is what they're not accomplishing," explains Berman. "Just realize it's a bigger journey and if you feel that this is what you're meant to do, then don't take rejection personally and just keep fighting for it."