Create an asset management infrastructure based on Avid Interplay and ISIS that enhances every aspect of the production process and enables the enterprise to adjust its business operations to directly impact the bottom line.

To maintain its leadership position in the television industry, Discovery Channel needed the ability to generate a rapidly escalating volume of high-quality content. Avid Interplay | MAM and ISIS shared storage, based on the Avid MediaCentral platform, not only enabled the channel to shift from tape-based to file-based workflows, but to go green in terms of saving both money, and the environment in the process.

Now, with Avid’s industry-leading video, audio, media management and storage solutions, the integrated asset management infrastructure at Discovery Channel affects virtually every aspect of the production process—making its newly integrated workflow truly organic, in more ways than one. “Everyone in the media industry knows that tape is extremely bad ecologically,” comments Clayton Dutton, Vice President of Post Production and Media Operations for Discovery Communications LLC, “so cutting down on physical tape assets allows us to reduce our ecological impact.” 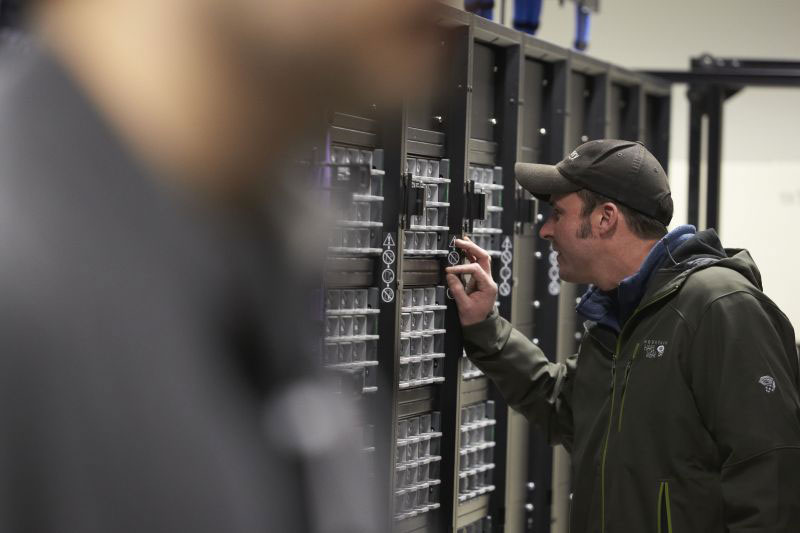 Making the most of their media

But going green also means growing financially. Operating in over 100 networks across the globe, Discovery knows a great deal of their success rests on making the most of their media—keeping costs down and maximizing accessibility, openness, and quality. With Avid’s proven and trusted solutions, Discovery has gained the ability to quickly adapt to audience content and consumer preferences and capitalize on opportunities to extend its brand across multiple screens.

Interplay provides us all with an environment capable of fostering unprecedented levels of collaboration.

As Clayton explains, “It's critical for us to know what media we have, what we can deal with, and what we can deploy across the world. Because in today’s world, media comes in so many different file types and flavors: SD, HD, and soon, 3D. Hi-res, Low-res, 23.98, 24P, 30P—it’s nearly endless.”

Prior to the deployment of ISIS shared storage several years back, Discovery used LVD SCSI drives, which meant that if a suite went down or anyone needed to share media, drives would have to be physically removed and plugged into another suite. Now, almost everything is connected to Interplay—up to and including the audio suites via Video Satellite. Interplay is currently capable of tracking over 2 million files.

The time had come

When Discovery edit suites were cutting between 10 and 15 items going to air within a same-day period several years ago, the organization decided to employ an asset management system capable of serving its performance needs in a more robust and stable configuration.

The purchase decision rested on three primary capabilities: metadata management, stability, and enterprise-level support. After conducting extensive research and looking at other potential solutions, Avid came up the clear frontrunner.

From a dollars and cents perspective

Not only have Avid’s video solutions increased Discovery’s awareness of its media assets and value, they have allowed the network to adjust its

For example, when producing the show Life, Discovery had five edit sessions going simultaneously, cutting various promos, doing re-versioning on programming, and creating ad sales clip reels. In the days prior to Interplay and ISIS, that work would have taken two or three times as long.

“Putting a hard number next to all that extra time,” claims Clayton, “has enabled us to really see it from a dollars and cents perspective.”

Interplay has allowed Discovery to start asking game-changing questions such as, “Is this the best way to do it?” The network now realizes that just because something has always been done a certain way, it doesn't necessarily mean it can’t be improved.

Today’s consumers want to view content on demand—anytime, anywhere. Moving forward, Discovery plans on employing Avid asset management solutions to serve as the cornerstone of a multi-platform distribution strategy, encompassing web, mobile, VOD, and 3D. With Interplay, editors will be able to migrate program content in the editing suite, where it is being worked on, and prepare it for almost any platform.

We push our system hard, and it responds beautifully.

“It is this perspective that encourages everyone to basically do more,” comments award-winning Discovery editor, Reggie Allen. “Interplay provides us all with an environment capable of fostering unprecedented levels of collaboration. I work with five amazingly talented editors that have a completely different aesthetic headset than I do. When you have all these tools, it makes for far more evolved peer-to-peer relationships.”

Once upon a time, Discovery, Animal Planet, and TLC were all in separate places. Now, the network is evolving into a tightly interconnected community where each individual has a window into what others are doing, strengthening creative contributions. As the Discovery Channel goes green, it’s certainly not with envy. Today the network’s success is second to none, both financially and ecologically. “We’re extremely focused on opportunities to keep growing smarter, more efficient, and forward thinking as a company,” says Clayton.

“It’s what makes it all worthwhile,” says Tory Capezza, Discovery Channel’s Media Asset Manager. “I just keep looking forward to what's coming next, and how are we going to be able to do it better, quicker, and easier. It’s what I really enjoy most.”