Elijah Ray: Bringing Light to the World with Pro Tools

Creating a natural feel in a recording is often a challenge for songwriters and producers who prefer to capture an improvisational vibe with their music.

Pro Tools lets songwriters and performers create music that is natural and collaborative, sounds amazing, and retains the style and passion of the performance.

It doesn’t matter what kind of mood you’re in. Once you listen to Elijah Ray, you’ll be in a better one.

He plays solo acoustic guitar, with virtuoso chops and a writing style that brings jazz elements and surprising modal shifts to upbeat strummed rhythms and uplifting solo lines. His voice covers a huge range, full at the high notes, breaking exactly where he wants it to, and natural enough to fill a room just by talking to the crowd.

Filling the room is what he does. Not just with his elemental and brilliant melodies, but positive vibes. A sense of adventure. Light. You can’t have a bad day when you hear his music.

You might have seen a guitarist break out a looper—a foot pedal or box that records segments of music and plays it back—while the player moves on to jam new melodies and vocals. It is a unique, improvisational art, and difficult to master. Elijah Ray turns it into magic. 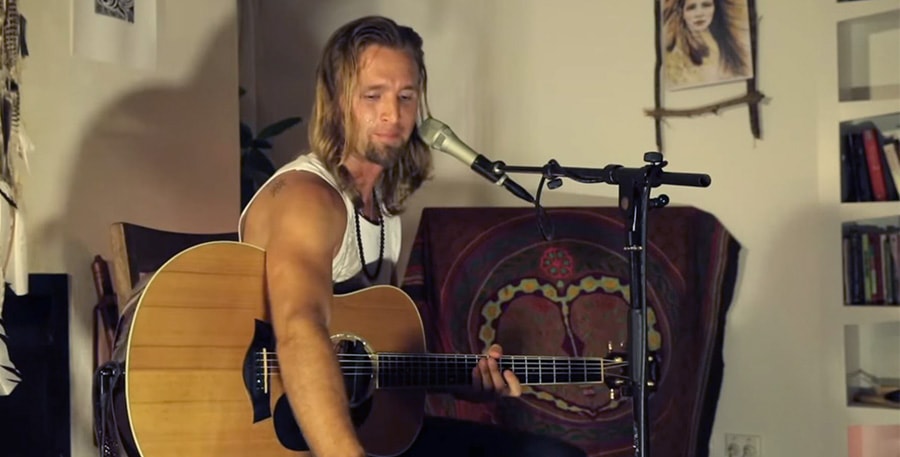 “When I go out live, I’m a one-man-band, where I bring a bunch of loop pedals, and record phrases on the guitar, build basslines, add beatbox, and sing on top of that.” The looper can enhance a live performance, while also introducing a new challenge, requiring an improvisational spirit. “It’s a really streamlined way to tour, to just bring a bag and my guitar and rock the house. It’s taken a good ten years to be able to stand with it and hold down a large audience with just me and my guitar and loop pedals.”

No matter how many times I’ve played certain songs, I take a jazz mindset, based on the vibe of the room and the people, and put a different spin on the groove, funk up the bassline a little bit and lean into it. It’s brand new every night.

For this reason, Elijah Ray's performances tend to be very different from what normally happens when touring groups take the stage. “For most acts it's about what the record sounds like, they’ve rehearsed it a million times and it’s going to be perfect, just like the record. But I’ve just loved to live on the edge, where it’s vulnerable. It’s edgy for a reason, and I love that space.” 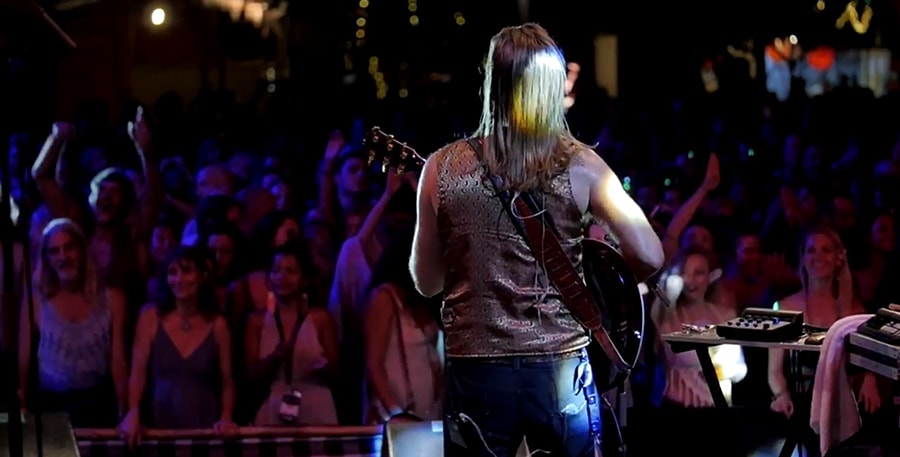 The skill it takes to move an audience with the loop pedal is as critical to the performance as mastering the guitar, but some view it as trickery. “I played at the opening of a club in Ibiza, and afterward someone said 'That was cool, but you played with backing tracks the whole night. Isn’t that cheating?'" Elijah doesn't use a backing track, but works the looper into the show to capture a natural feel. "Looping is an art form unto itself, and my years as a drummer and a composer have given me that ear, because I can’t stand if it sounds like a machine."

And Elijah isn’t always going solo. He also shows up with a full band, the “Band of Light”, which includes members like Bibi McGill, Beyonce’s guitarist, and Jesse Carmichael from Maroon 5. 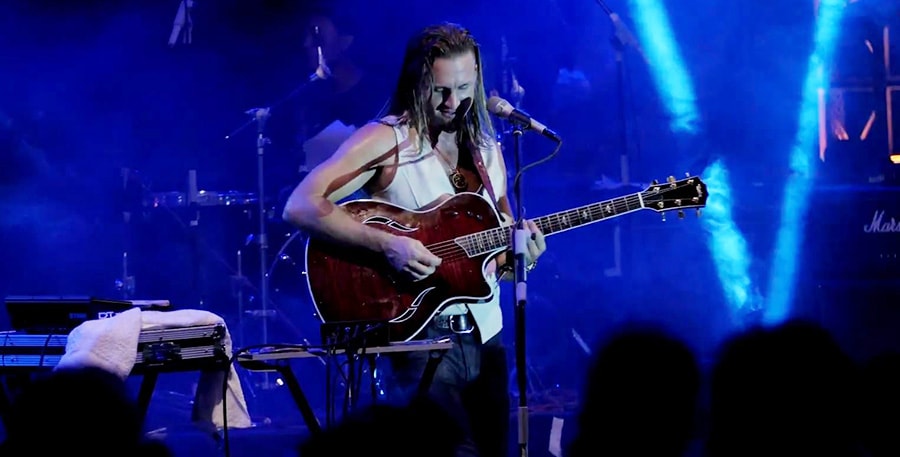 The Band of Light is kind of like the Avengers; I can call and say ‘Okay, it’s time for the band to come together, so put on your capes, and we’ll get together and rock a show.'

This improvisational approach to performance is evident in Elijah's studio work, whether at his studio in Portland, Oregon, or Sonic Vista Studios in Ibiza, where he spends half the year working with Henry Sarmiento. He uses Pro Tools to capture his performances on guitar, as well as percussion, keyboards, vocals and electronic sounds. “I play multiple instruments so when I get into the studio I do more of the Prince thing, and stack myself.”

His music is difficult to describe, but it’s always infused with Ray’s unique upbeat vibe. “It’s the oldest question in the book and the hardest one to answer. I’d really love to say it’s Elijah Ray style. It really is a unique feel, it hits you in a lot of different places in the soul. You hear soul, R&B, the best of pop at times, but with a lot of roots and that homegrown feel, acoustic-driven, and at times super funky.” 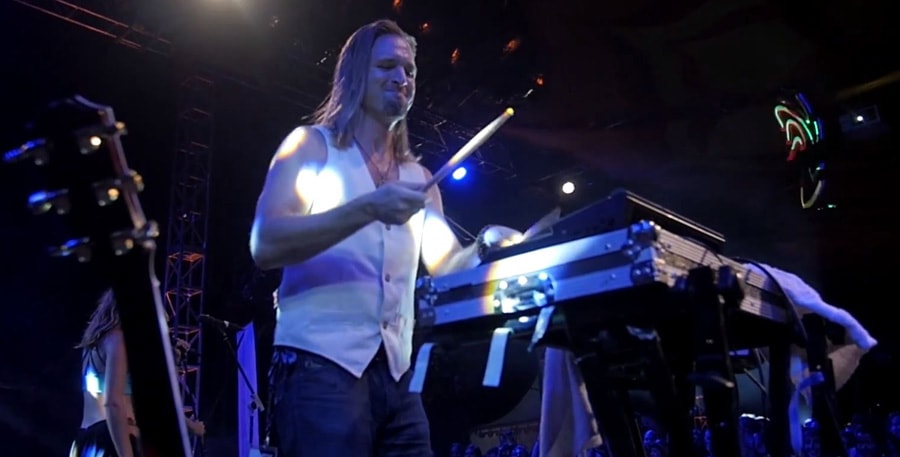 I just moved my entire studio & home base to the northwest, creating an environment where artists can immerse themselves, create, and it’s like a sister site to Sonic Vista. Portland’s my hometown, where I have roots, and can be near family.

Elijah Ray has been a uniquely skilled musician from day one. After one year of college in Portland, a professor told him he didn't need to be in music school, but to just get out there and play. “I was so grateful that my professor gave me the little nudge out of the nest, because I learned what I needed to learn by just getting started early. For me, music was always about closing your eyes and listening to what the moment had to say.”

Within a few years, he met Henry while working at Herbie Herbert’s studio in San Francisco. "I met a lot of my mentors and rock legends that brought me into the family. We’ve had a long friendship and a long working relationship in music.” Elijah is working on his third album with Henry, as well as ten other releases in many different genres. He considers Pro Tools his primary instrument for recording and comping tracks to capture the most natural performance. Pro Tools offers Accelerated Playlist Comping to quickly compile the best parts of different takes. 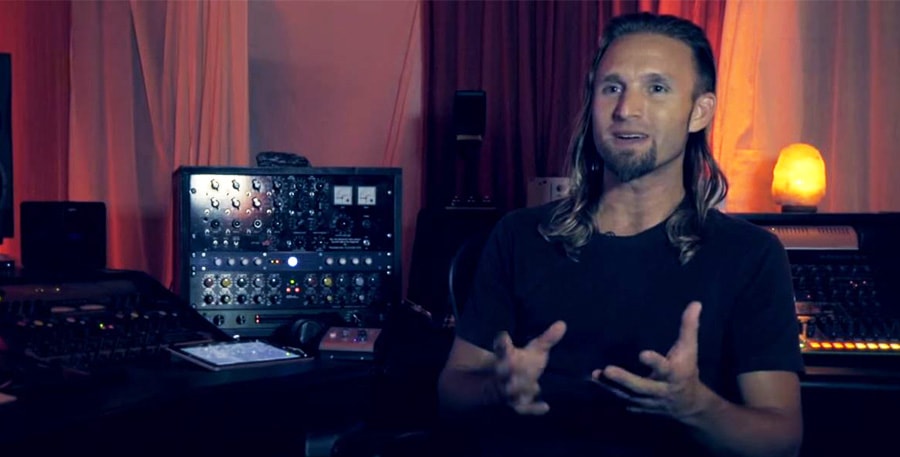 For the last couple of years, Elijah has been releasing one song at a time, which he can do quickly using Pro Tools offline bounce feature. With distribution and publishing platforms going digital, he is releasing his entire discography through Spotify. "I’ve got three records there now, and really focusing on the new one. But for those following me on Spotify, it’ll be kind of a surprise to find I have ten other albums.”

In music, like in dance, and art, and any art form, we’re perfecting something we can reproduce time and time again, or we can close our eyes and let it come from the inside. In a perfect world we’d be a great blend of both.

Watch Elijah Ray talk about his philosophy of music, playing with loops, and performing with the Band of Light as they play Walk With Me: