In the Tunisian desert, an epic conflict is raging. Sixteenth-century Mamluk and Ottoman warriors face off in a bloody battle for control over the Middle East. At stake in this struggle for supremacy is the course of history itself.

And then, when the cameras stop rolling at the end of the day, the real battle begins. Kingdoms of Fire, the much-heralded new historical drama, boasts a larger-than-life story—and a larger-than-life data footprint. It’s up to the team helmed by Khaled Ben Younes, Genomedia’s head of post production, to take enormous quantities of raw 4K footage and transform them on a tight deadline into the polished, high production-value show that debuted on MBC in November 2019 to major buzz across the Arabic-speaking world.

Dubai-based Genomedia, founded in 2016, is small but ambitious. With only 20 employees, the production company punches above their weight: Kingdoms of Fire is their first drama series, but it’s one of the largest Arabic-language TV productions of 2019, with a total budget of $40 million USD.

Working against the clock

When shooting wraps each day around 7 p.m., the countdown begins. “On set, during the shoot, we shot around six to eight terabytes a day,” Khaled explains. This raw footage needed to be ready for the producer, who was 4,000 kilometers away in Dubai, to watch the very next day.

The moment the portable drives with the day’s footage arrive at the post house near the set in Tunisia, Khaled’s team sets to work copying and syncing the raw material, quickly grading everything, and exporting a timeline on a daily basis. By the time 8 a.m. rolls around in Tunisia—11 a.m. in Dubai—the producer has been sent an assembly of the previous day’s footage and the editor is ready to get to work.

In this environment of tight deadlines and high production standards, Genomedia needed a post-production infrastructure that could handle massive amounts of data while supporting an ultra-efficient workflow.

If we didn’t have an Avid solution, the show would never be on air on the 17th of November.

Kingdoms of Fire’s ambitious concept is matched by an ambitious post-production workflow. The challenge begins with shooting in 4K—a single hour of raw footage from an ALEXA LF camera nets out around 2.4 terabytes of data. Managing this much data on an accelerated timeline meant Khaled and team needed a high-performance, high-reliability media storage solution that would run smoothly while up to six editors were accessing the same media at the same time.

Khaled chose a three-tiered Avid NEXIS storage system, partitioned according to how quickly they needed the data. “In our Avid NEXIS we have an E2 SSD, which is a fast playback storage. We have the E2, which is more than enough for the editorial. And we have the E5 NL, the nearline,” Khaled explains.

“We populate the whole E5 NL, which is 960 terabytes, which was more than enough to handle all the footage. We link all our episodes straight to the E5 NL with our grading solution, which is a Baselight connected into the 40-gig connection, straight to the NEXIS. We can read easily and fluently the footage directly from the E5 NL, and do all our consolidations and all our grading again, even the export straight from the E5 to the E2 SSD, which was almost impossible to do through any other storage because of the bandwidth and because of the easy access to the footage.”

After all of the edits and the cuts and the recuts…I don’t think that any other system could be efficient enough to handle all this change.

Khaled considered other storage solutions, but ultimately chose Avid NEXIS because of the reliability that comes with working in a single environment across the entire workflow. “Other storage solutions give you an emulation of the Avid file system, which is fine, but for a big project like this one and having collaborative teamwork on the edit, those systems had a lot of crashes and errors. The best choice, in my opinion, is to go for Avid’s solution because it’s their own file system,” says Khaled. “I can tell you that after all of the edits and the cuts and the recuts that we did for these 14 episodes, I don’t think that any other system could be efficient enough to handle all this change and the exchange of IMF back and forth between editors, and grading, and VFX, and sound.” 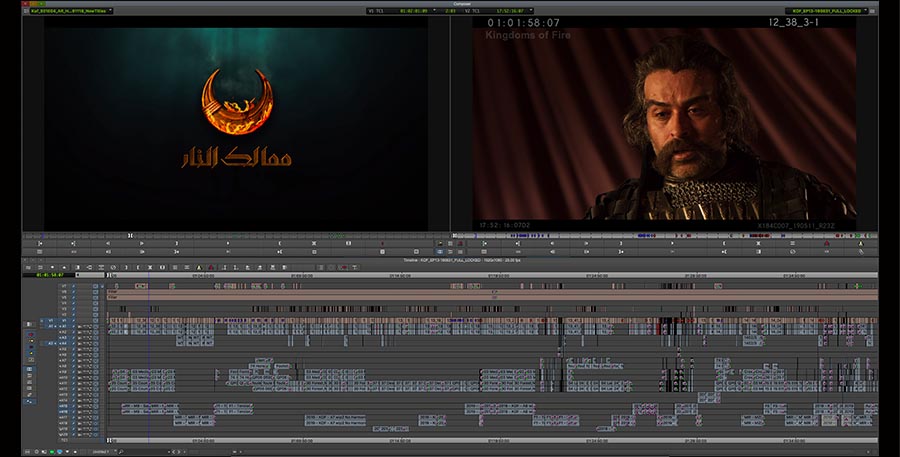 In search of workflow efficiencies

Khaled answered this challenge with an end-to-end solution that layered MediaCentral | Editorial Management on top of Media Composer and Avid NEXIS storage. Taken together, these integrated technologies let the entire post-production team work simultaneously, access media instantly, and seamlessly transfer information across departments, all while managing who has access to what in order to meet security standards.

The three assistant editors made the most use of Editorial Management to make short work of organizing mountains of footage on a daily basis. “The show was shot by two units, one main unit and one second unit, and for the battle shooting we used multiple cameras, multiple formats—really a lot of footage,” Khaled explains. With Editorial Management, the assistant editors could quickly and efficiently identify the best takes and send them straight to timeline so that the editors could begin working as soon as possible. It also made short work of selecting footage for marketing promos as the show neared its premiere.

The collaborative workflow of Avid Media Composer reduces the time to have the episode ready by a factor of five, because instead of having five projects in five machines…you have five people working on the same project.

The secret weapon in Khaled’s battle for time was real-time collaboration in Media Composer, which he estimates reduces the time to complete an episode by a factor of five. He explains, “Instead of having five projects in five machines working, and then collecting the five projects onto one timeline at the end to export the final episodes, you have five people working on the same project.”

To get the best outcome in a short time, Khaled sings the praises of what he calls a “pyramid workflow”—one team member doing sync, one doing assembly, one grouping the scenes, and one finalizing—a process he can only do with a combination of Media Composer’s collaborative workflow and a high-performance storage solution. “I can tell you, if we didn’t have an Avid solution, the show would never be on air on the 17th of November,” Khaled quips. 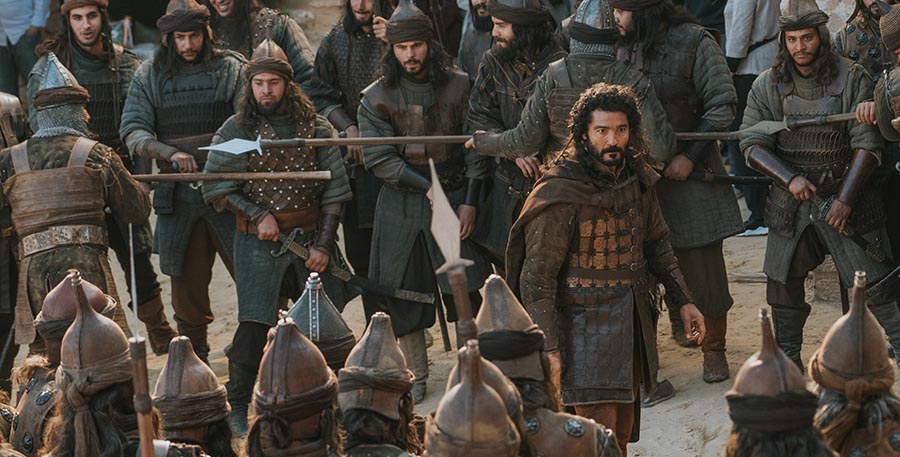 Epic stakes for an epic production

In keeping with Kingdom of Fire’s larger-than-life feel, there’s more at stake for Khaled and Genomedia than the success of this one program—even one on this scale. Khaled’s aware that an investment in post-production infrastructure like this is not common in the Middle East, and he sees this production as an opportunity to prove what the region can do.

“Investing in such big-scale post-production equipment means that you are intending to do big-scale productions as well,” Khaled says. “It gives us the opportunity to show people in this region, in this part of the world, that we can produce a high-quality product by investing in the right equipment for the right solution.”

With Kingdoms of Fire sweeping across Arabic-language TV since its November debut, Genomedia’s poised to prove just that.