Germaine Franco on Dora, Collaboration, and Her Favorite Avid Features

Franco needs a reliable system to collaborate seamlessly
with creatives both in and outside of the studio.

Tag, Dope, Vida, Coco, and Little. What do these famous titles have in common? They all feature scores and/or songs by award-winning composer, songwriter, orchestrator, arranger, and music producer Germaine Franco.

Franco’s storied career includes working alongside an impressive list of top film and TV composers over the years, earning her a rightful place among them. In 2018, Franco produced, arranged, and orchestrated the Oscar-winning song for the Disney/Pixar animated film Coco. In addition to composing and producing songs for the film, she provided additional music to the score and conducted multiple ensembles featured on the soundtrack. A few—of her many—accolades include winning the Annie Award for Outstanding Achievement for Music in an Animated Feature film (Coco), receiving a Sundance Music and Sound Design Fellowship, a Women in Film Music Fellowship, and the 2018 ASCAP Shirley Walker Award. Univision even named her one of "15 Latinas who are changing the world as we know it" alongside Rita Moreno and Emma Gonzalez. And the numbers speak for themselves: Franco’s theatrical box office work has grossed over $1 billion.

We spent time catching up with Franco, whose recent work on Paramount’s Dora and the Lost City of Gold allowed us a peek into her creative journey. “I co-composed the score for Dora and the Lost City of Gold with John Debney,” she shared. They watched the film together and talked about director James Bobin’s creative vision. “We discussed the storyline and the narrative intention for every cue.” The two composers and filmmaker spent several sessions going back and forth, collaboratively brainstorming. “James requested an adventure score that reflected the epic journey that Dora takes through the jungle with her friends. [He] wanted to portray Dora’s teenage spirit and tenacity throughout the fabric of the score; that request resulted in a lot of lively Latin music cues.” 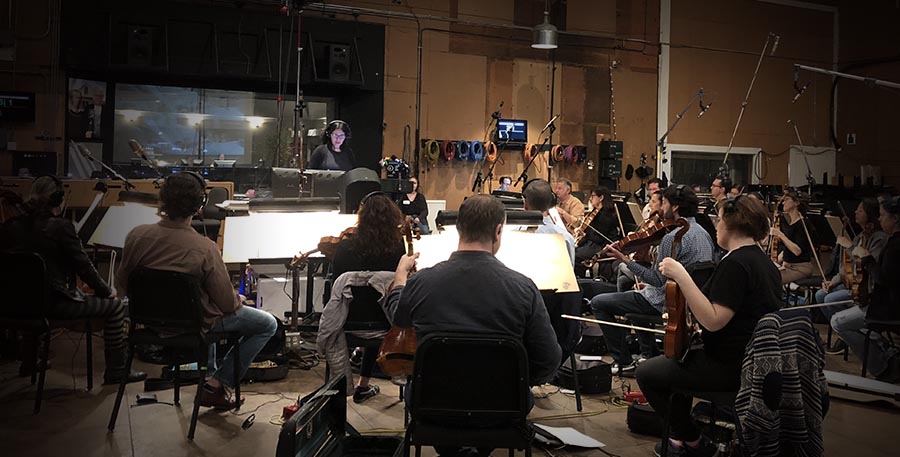 Germaine Franco with the scoring orchestra at Sony Scoring Stage

Franco and Debney collaborated with lead orchestrator John Ashton Thomas to transform audio and MIDI tracks into orchestral scores. The composers sent audio files of their stereo mixes and split stems to the orchestrator. After orchestration was complete, PDF files of the score were delivered to the music prep team to create parts. Franco continues, “John Ashton Thomas is one of the fastest musical orchestrators of all time. His musical expertise is simply outstanding.”

Besides sending files to the orchestrator, Franco’s music team prepares “sync masters” in Pro Tools | Ultimate for the recording sessions. “During this process we export the score audio and prep an all new set of Pro Tools sessions—specifically designed for recording the live players. These files are different than the files we send to the score mixer. We prepare basic stems (i.e. Strings, Brass, Winds, Synths, Perc, etc.), so that the recording engineer has options. Often,” she continues, “the engineers have their own Pro Tools templates, and they’ll import my stems into their templates. Everything has to be in sync with the video and match the scores.”

When it comes to notation software, “Sibelius is a vital tool to help get our ideas out of the studio, onto the page, and onto the stage. We have constant deadlines. There’s always a cue that has to get approved at the last minute. Synchronization is absolutely essential,” Franco emphasizes. “You have to make sure all of your Sibelius files sync up with your Pro Tools sessions because if you open a score on the stage, and your Pro Tools session has a different tempo map, time is wasted. The music has to be recorded as quickly as possible.”

Sibelius is a vital tool to help get our ideas out of the studio, onto the page, and onto the stage.

“On a typical film project,” Franco explains, “I help the director and producer find the right ‘tone’ for the film. This involves experimentation, demos, and many creative discussions. Generally, I am involved in the entire process—from the first spotting session to the final music mix.” Her memories of the orchestra are vivid. On Dora and the Lost City of Gold, “We were at AIR Studios, and we had some incredible musicians. We had a full symphonic orchestra, a choir, a Latin rhythm section, pop brass, and saxophones, and South American woodwind soloists. In short, John and I did a huge amount of recording. We had multiple people recording live at once. The recording sessions took place over four days. Nick Wollage recorded in Pro Tools on the live sessions. Then, Simon Rhodes mixed all of the elements together in his mix room. The entire project at AIR took place in the Pro Tools ecosystem.” 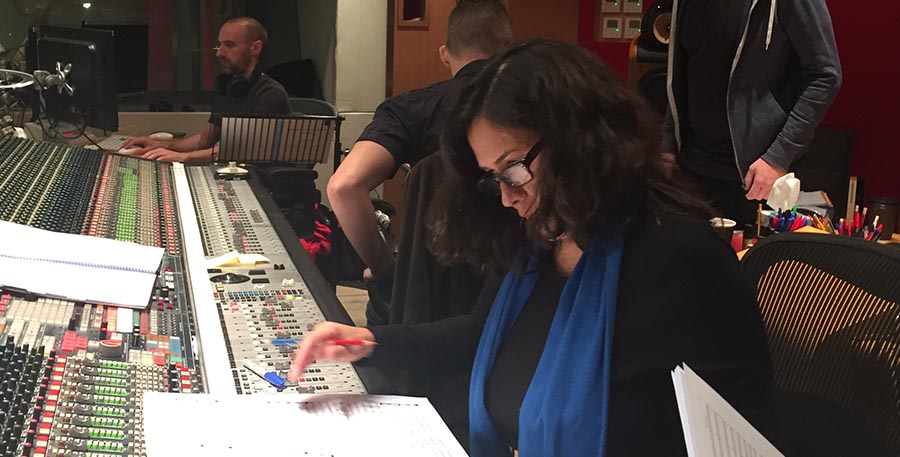 For Universal Pictures’ theatrical feature Little (directed by Tina Gordon Chism) Franco relied heavily on Sibelius. “In addition to the orchestra, I used a whole marching drumline, big brass and sax sessions, and a gospel choir,” she recounts. “Having Sibelius on that particular film was really important because there were so many different ensembles. That one was very complicated within Sibelius because we had some pre-records, and they were written out. Some sessions were recorded previously in Atlanta with a marching band on camera. Then, I had to match the sound with a drum line here in LA. Sibelius is really a great tool for music preparation and orchestration; it provides all the different symbols that a composer needs for any type of ensemble. One of the reasons I love Sibelius is that it’s so versatile.” Franco explains, “This versatility is key when I am producing new scores every few months in entirely contrasting musical styles.” 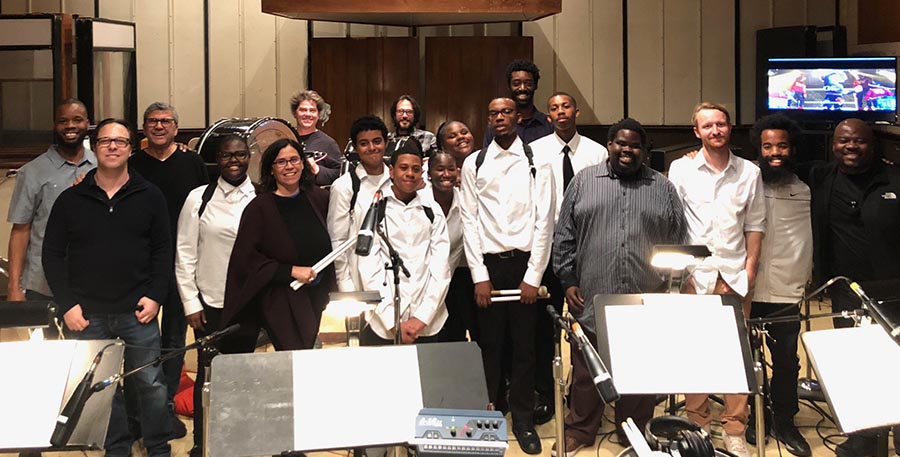 “On many projects, including Coco, Little, and Tag, I worked closely with Booker White and his music preparation team. Booker and his crew create parts from the conductor scores that are created by orchestrators. On Coco, Booker kept track of multiple song versions throughout the entire project. He has been an essential member of my musical team for many years.”

Franco’s LA-based mix team is made up of Grammy award-winning David Boucher and Alvin Wee. “They both worked with me on Little and Tag.  David was the recordist of the various ensembles and Alvin was the score mixer. Both are excellent at recording any type of ensemble and large orchestra. They are able to transform the live recording with my programmed tracking into the perfect mix for the big screen.” 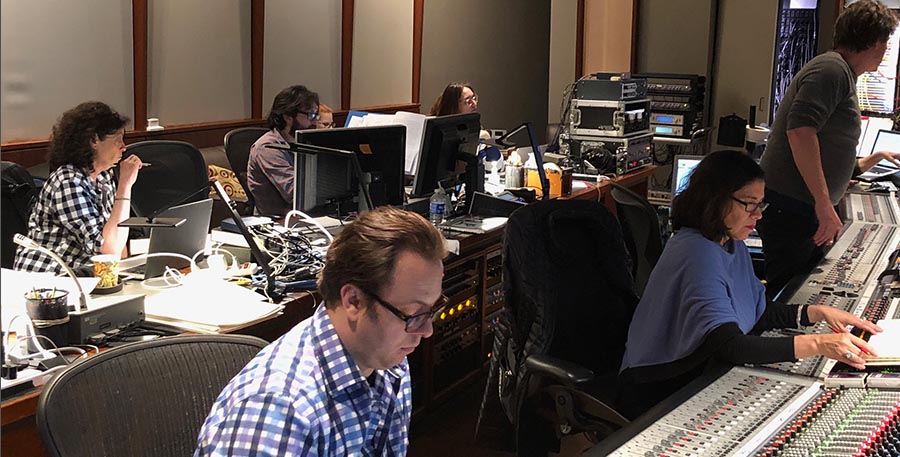 Franco always delivers the final score assets to both the scoring stage and dub mixers as Pro Tools sessions. “Our score audio is sometimes 100 tracks or more deep,” she notes. “We assemble all of our recording templates and final mix sessions directly in Pro Tools,” Franco highlights. “Pro Tools makes it incredibly easy to import my often dense MIDI arrangements and audio assets from my writing sessions into the final recording sessions and score mix sessions. After this final session assembly, we then send Pro Tools sessions back and forth between our studio, our collaborators’ studios, the recording stage, and the final dub stage.”

Pro Tools makes it incredibly easy to import my often dense MIDI arrangements and audio assets from my writing sessions into the final recording sessions and score mix sessions.

“There are never any compatibility issues between the various systems,” she clarifies. “This ability to collaborate with other creatives outside of our studio space allows us all to focus on telling the best story possible through a seamless marriage of sound, score and images. On top of that, the bundled plug-ins (Avid Complete Plugin Bundle and HEAT) and their intuitive presets make it easy for the team to put together quick mixes for review under tight deadlines.” Plus, “The overall stability of the Avid Audio Suite ecosystem is outstanding!” she exclaims. 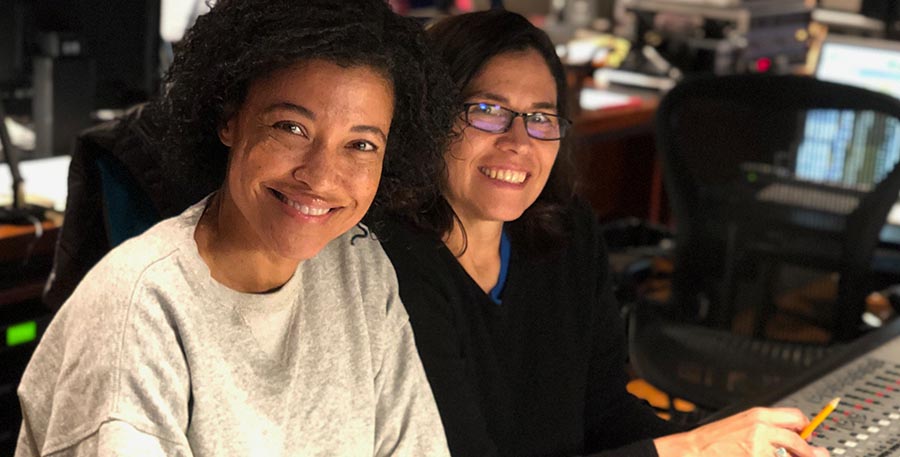 It’s clear Franco loves each unique journey; from getting a new project to finding the correct tone of a film through sonic experimentation with the director. She enjoys the entire process of writing, collaborating, recording, and mixing with a proven team. “I think the most enjoyable part of the process is working with the live musicians, because that’s where everything really starts to come to life,” she muses. “Ideas that were demos in the box develop as they are played and performed by real people. The musicians and singers that we work with in LA and London are extremely talented and add a brilliant humanity to the score.”

Franco uses Sibelius’ Review Mode extensively, and she uses the Transport and Playback features to listen to the entire cue. “I also use the Magnetic Layout options extensively, which saves many hours of work,” she relates.

“My favorite feature is the Timeline; I use it to check bar numbers and tempo changes quickly. I also use the filter extensively when working in multiple voices, adding lyrics and chord symbols. I filter text, voices, chord symbols—I filter everything. I find that is a quick way to work. I like to use the options to Hide Staves and Focus On Stave they are really handy; when I’m working on only strings, I don’t want to see everything, and it saves me time, that would be spent scrolling up and down across the page in other programs.”