Globe tv Positions Itself for the Future With Maestro Graphics

Globe tv needed to enhance the infrastructure to meet future demands, in order to facilitate up-to-date graphics generation, to permit increasingly collaborative production, and to create scope for future design and workflow tasks.

At Globe tv, seven Avid editing stations are in operation for trailer production. In addition, a graphics and design workstation has been installed. With Avid NEXIS and Maestro Graphics, the storage capacity has been increased more than tenfold, to 480 TB. The production team now works with a cohesive workflow and a uniform processing platform.

Globe tv has relied on Avid for more than 20 years

Productions of Globe tv Film and Television Production Company m.b.H. have been widely viewed. For example, trailers for the popular television crime series and most expensive German television production to date, Babylon Berlin, were shown everywhere a few years ago. Moreover, in Germany at least, the lottery draws are also familiar to everyone. On behalf of Deutscher Lotto and Totoblock, since 2013 Globe tv has been broadcasting the draw twice a week from its own studio, live on www.lotto.de on the Internet.

Founded in 1992, Globe tv is part of the Saarländischer Rundfunk (SR, Saarland Broadcasting) group. The location of the company headquarters at the Funkhaus Halberg media center in the city of Saarbrücken facilitates networking with all media services of the SR and ARD (working group of public broadcasters of the federal republic of Germany). Whether in the case of industry films, marketing commercials or advertisements, Globe tv directors, editors, motion designers, camera operators, vision mixers, audio engineers, translators, and announcers produce for film, television and Internet–from conception to shooting, editing, post-production, and audio final processing. For this work the company employs 14 permanent staff and numerous freelancers. They prepare more than 2,500 broadcasts annually. Approximately 3,000 trailers and teasers, advertising some 900 films and TV broadcasts, are made each year for the channels Das Erste and One. In addition, trailers are made for special campaigns, and the trailers produced are also processed for social media applications. Advertising and image campaigns and the recording of documentary reports are also part of the Globe tv portfolio. A special department takes care of subtitling, speech processing, and voiceovers. To meet these diverse requirements, the production company has relied on solutions from Avid since 1997.

The globally active company Avid, headquartered in the state of Massachusetts, USA, sets standards for the entire media value chain. With powerful open platforms, workflow solutions and tools, Avid enables companies like Globe tv to create, manage, store, distribute and monetize film and television content. Avid modernizes work processes, standardizes infrastructure, optimizes business and maximizes the value of content. In this way Avid helps production teams and media companies to tell powerful stories and to be successful in the digital age, as the continuous technological advancement of equipment and the use of increasingly large bandwidths, for example, are changing the viewing habits and expectations of viewers. Existing content, originally created for television, must be prepared for the Internet and for social media channels. Thus, already produced films pass through the production chain several times, for different types of application.

“To some extent this requires an even more collaborative production method than before. Colleagues from the areas of editing, cutting, graphics and sound design access the material simultaneously and process it. Previously separate departments increasingly work together on the same platform,” explains Michael Degott. As head of Production and Technology at Globe tv, he is responsible, among other things, for all of the technological infrastructure.

“We needed a powerful server for our Avid infrastructure, and a new graphics system to replace the old Avid DS. It was important for operation to be intuitive and for editors to be able to call up and make use of ready-made templates. In twenty years with Avid, there were no significant malfunctions with associated expensive downtime. Therefore, we again decided on a solution from Avid. The technology that was newly installed in July 2018 replaced a nine-year-old Avid installation that was running smoothly, still with the original hard drives, until the last day. In our company we now work with a cohesive workflow and a uniform processing platform,” says Michael Degott. 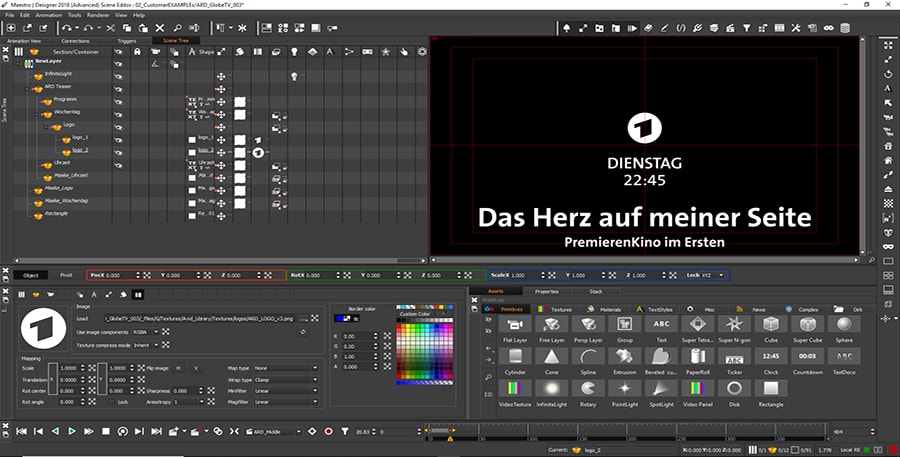 The Avid graphics systems Maestro | Designer and Maestro | PageEditor enhance the new infrastructure. Maestro Graphics facilitates the realization of everything from simple graphics to complex virtual studios (Maestro | Virtual Set), augmented reality content (Maestro | AR), and high-resolution video walls ( Maestro | Powerwall). It also functions smoothly with applications from third-party suppliers. Maestro | Designer and Maestro | PageEditor form an optimal combination for integrating and flexibly designing text and graphics in Media Composer. Data connection with a wide range of sources (e.g. Microsoft Excel, XML, etc.) can be quickly and easily established, operated and managed. The Maestro | NLE plugin facilitates the handling of intelligent templates in Media Composer, with no additional rendering hardware (Maestro | Engine) required. Maestro | Designer and Maestro | PageEditor with Maestro | NLE plugins serve as a cost-effective, flexible model for entering the Maestro Graphics world. “It was very important for us to be able to integrate the new graphics system harmoniously into our workflow. Maestro Graphics was the obvious solution for us, since the software can be used in a straightforward way with Avid Media Composer. The graphical final processing of trailers has also become much faster. For us Maestro Graphics especially simplifies the processing of diverse formats,” explains Michael Degott. 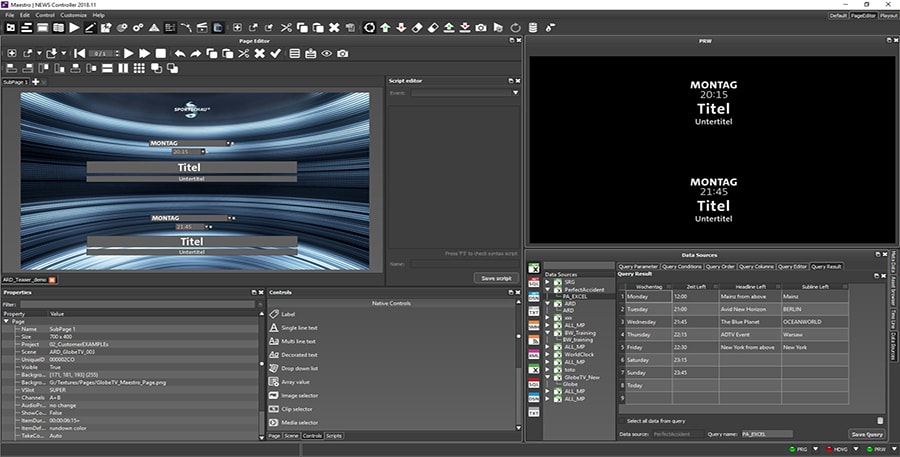 Particular emphasis has been placed on the creation and processing of flexible templates with data connection, and on the workflow in conjunction with the existing Avid environment. Template data connection can take place via text files, XML, or Microsoft Excel spreadsheets. This results in faster new workflows with greater reliability and flexibility for handling graphics and text in Media Composer.

“For us the system which has now been put into operation means the continuation, technological improvement and acceleration of our work processes. Maestro Graphics optimally meets the requirements for trailer production and the associated workflow. Like the technical personnel, our editors handled the programs well from the beginning,” summarizes Michael Degott.

For trailer production there are currently seven Avid editing stations in operation at Globe tv, which are connected with Avid NEXIS. Maestro | NLE plugins, which as native AVX2 plugins function seamlessly with the Avid software, run at the editing stations. Globe tv has increased the storage capacity more than tenfold, to 480 TB. The old Z400 machines have been replaced by fast, powerful HP Z8 workstations. The enhanced storage space and performance simplify the daily work of the Globe tv team, particularly in the realization of large projects.

For existing Maestro Graphics users and editors who have previously used only Media Composer or Adobe Premiere, the workflow described here offers interesting new cost-efficient application possibilities and enhancements in the area of real-time graphics.