There are few international sports events that have the global reach and caché of the World Cup. The 2018 FIFA World Cup Russia presented an unmissable opportunity for broadcasters to embrace the latest innovations that advance the way live sports coverage is created, distributed and experienced on screens around the world. Brazilian leading broadcaster Globo wanted to write itself into the World Cup narrative by pushing boundaries and setting new standards for live sports viewing experiences. By integrating Avid’s Maestro augmented reality solutions in its new studio situated at the center of the action in Russia, Globo did just that.

Globo recognized that efficiency and creativity needed to be at the center of its new studio’s operations and capabilities. Global broadcast services market leader Gearhouse Broadcast worked closely with Globo to provide the required equipment and systems integration services for the state-of-the-art production studio located in Moscow’s Red Square. With design thoughtfully developed by Globo’s Arts & Technology Divisions, and project support from Avid, the studio was designed to bring Globo’s World Cup coverage to life error-free and with immersive, captivating reality.

“There was a lot of preparation and planning required to make sure the studio delivered a seamless performance,” said Ed Tischler, managing director at Gearhouse Broadcast UK. “Before Moscow, it was tested at Estúdios Globo, in Rio de Janeiro, and then at Gearhouse’s UK facility, analyzing and tweaking so we could turn up on site and get started immediately. We worked closely with Globo at every step on the road to Moscow to help make their creative vision a reality.”

Globo’s studio in Russia represented an evolution from its former live sports production setup created for the Rio 2016 Olympic Games. It also served as the base for its first-ever augmented reality capabilities—a momentous move for the broadcaster. Avid worked alongside Gearhouse to deliver an Avid Maestro solution that enabled Globo to keep up with the fast-paced action on the pitch and create eye-catching graphics to thoroughly engage viewers. 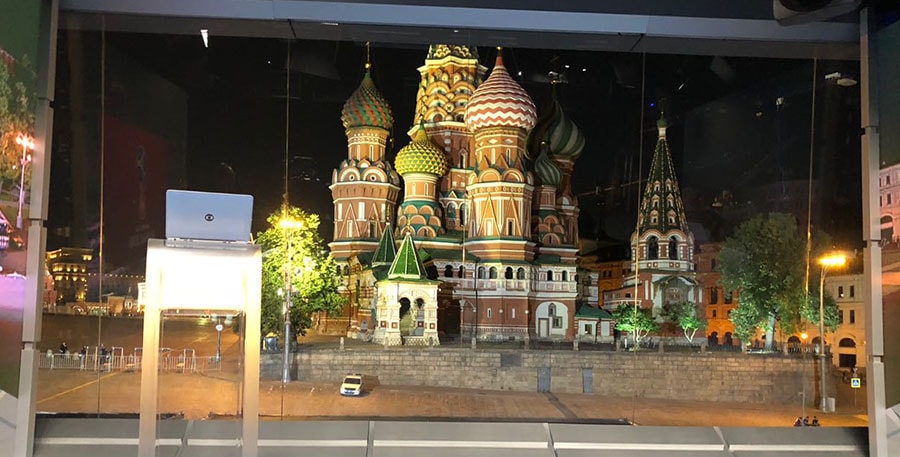 “In our studio there were no physical scenic elements, so the plan was to create “virtual” walls, floor and ceiling canvas, where we could display images captured live, with three fixed cameras, from the outside world, simulating virtual windows, which could on top of that be overlaid with various types of graphics such as statistics from games, weather info, the agenda of events for the day, virtual picture-in-picture displays for live interviews, among others. On top of that, we wanted to insert virtual 3D elements, such as animated players, arenas, maps, team line-ups for the presenters to interact with. And all these elements should be tightly tied to the movements of our studio cameras, so that the final composition looked realistic to the eyes of the viewers at home” said José Manuel Mariño, Globo’s Director of Technology for Sports.

...Avid was absolutely brilliant to work with on this project. The team was cooperative, helpful and acted more like a partner than a supplier.

“This studio aired four live network news shows per day, and two weekly live network programs. With all of the production coming out of the studio being live, there was no margin for error. The graphics platform must be robust and reliable, present the graphics with all the quality and detail that the Arts Crew demanded, and be flexible to accommodate last minute changes, typical of the live TV workflow. That’s where Avid’s graphics solutions came into the equation.”

Globo’s augmented reality graphics succeeded in elevating its live sports coverage on the world stage, providing the opportunity to present information to its audience in a more aesthetically pleasing and creative way. And what better time to do it than at the world’s most prestigious football tournament—in a year considered to be the most successful in the tournament’s history.

“Avid’s impressive AR solutions will increasingly figure prominently in high-profile sporting events like the World Cup,” adds Tischler. “Avid was absolutely brilliant to work with on this project. The team was cooperative, helpful and acted more like a partner than a supplier. Together we were able to overcome the challenge of delivering convincing augmented reality graphics in an ever-changing and unpredictable live environment.”