Harry B. Miller III, ACE: On the Evolution of Storytelling

For every type of story, the editorial department needs video editing software that can keep up with the rigorous shooting and production schedule and accommodate various publishing iterations and formats.

Media Composer | Ultimate is the widely-acclaimed solution for video editing because of its stability, consistency, support, and capability to deliver for storytellers who demand and deserve excellence.

The Predator is the latest in the long-running series of films about the spacefaring hunters that began in 1987, with the John McTiernan film featuring Arnold Schwarzenegger and his ill-fated crew of Green Berets. Probably more so than most film and media franchises, the stories follow no fixed pattern in time, setting, or cast. They also include universe-crossing films like Alien vs. Predator, opening the door to another property with its own varied timelines. There are few limits on where a Predator story can take you.

The wealth of stories means that everybody knows what Predators are and what they do, and this movie launches directly into the story with that assumption in mind. Harry B. Miller III, ACE, talked with Avid about the process of editing the movie, working with director Shane Black, and stretching the borders of this vast sci-fi property.

The challenge of keeping pace

From the first scene, the audience is immersed in a harrowing chase between two spaceships, and if there are details and clues for the hardcore Predator geek to pick out, it won’t be easy, unless you are the editor in the first place. The cuts drop you into the middle of each shot, instead of spending frames on setup. Harry talks about how this style of cutting helps to set the mood for the entire picture.

Shane Black’s sensibility is that, very rapid-fire. He feels the rhythm of the story, and can’t abide it feeling slow, so the cutting is like that, with hardly any setup in the action scenes. It makes an enjoyable ride. 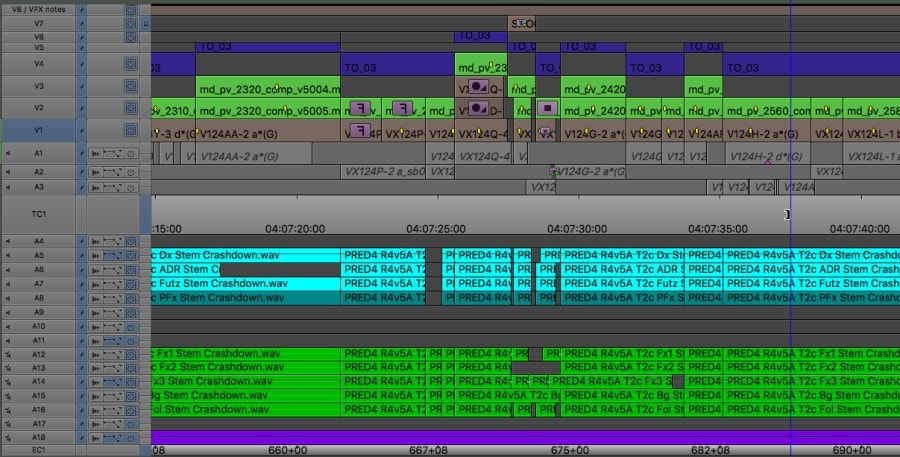 In the timeline, you can see the original picture in V1, with the green clips are the VFX iterations, and the blue clips indicate which shots have been turned over to VFX. A1-A3 are original dialogue clips, turned off to prevent doubling. A5-A8 (light blue) and A12-A16 (green) are stems from the sound department, with temp music at the bottom.

Sound is a big part of storytelling, especially in science fiction, where so many sounds don’t exist in our world, and are based completely on the imagination of sound editors and designers. Whether it’s the buzz of a wrist-mounted laser or the power-cycling of a predator spacecraft, the team creating the sounds are all at the top of their class. “The sound mix was done by Deb Adair, on dialogue and music, and David Giammarco for sound effects, mixers that co-editor Billy Weber had worked with before. I have worked with a lot of people on the Fox sound team like Skip Longfellow and Jay Wilkinson—he’s a brilliant sound editor. He’s a savant. He remembers every sound he’s ever heard. He knows what a predator dog would sound like. He provided the most distinctive material for the movie.” Jay supervised Aliens vs. Predator: Requiem and remastered all the original sounds from the 1987 movie.

The experience of Media Composer isn’t much different from version to version. Even the latest update like the Live Timeline is not jarring in the way it works.

When it comes to software, Harry mentions the consistency and stability of Media Composer. As you might expect, it is standard practice for the editorial team to keep everything uniform throughout the production schedule. This means keeping everyone on the same version, and The Predator was no different. “We cut the movie with two editors, two assistants, two visual effects editors, and two 3D editors. Everybody used Media Composer 8.65 and we don’t update the version or the MacOS during the show. It’s eighteen months in shooting and then editing, and there’s not enough downtime to deal with updates.”

The Avid community support team is highly regarded by Harry and many other editors in the industry, led by Marianna Montague, Director of Online Communities and Customer Advocate. “Marianna is our go-to person, if you’re having a problem with Media Composer.”

Shane Black has written and directed countless movies, and immerses himself into every stage of the production, from writing and acting (he portrayed Green Beret Hawkins in the original Predator) to taking a finely-tuned view of post-production and editing. “Shane went to drama school at UCLA. He loves being an actor, being involved with the movies.

Some directors don’t enjoy the editing process. Shane loves it because he’s a storyteller. 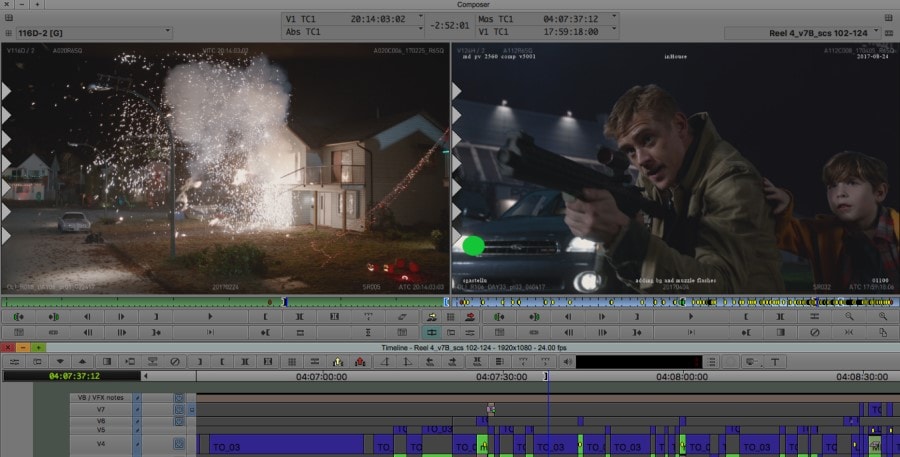 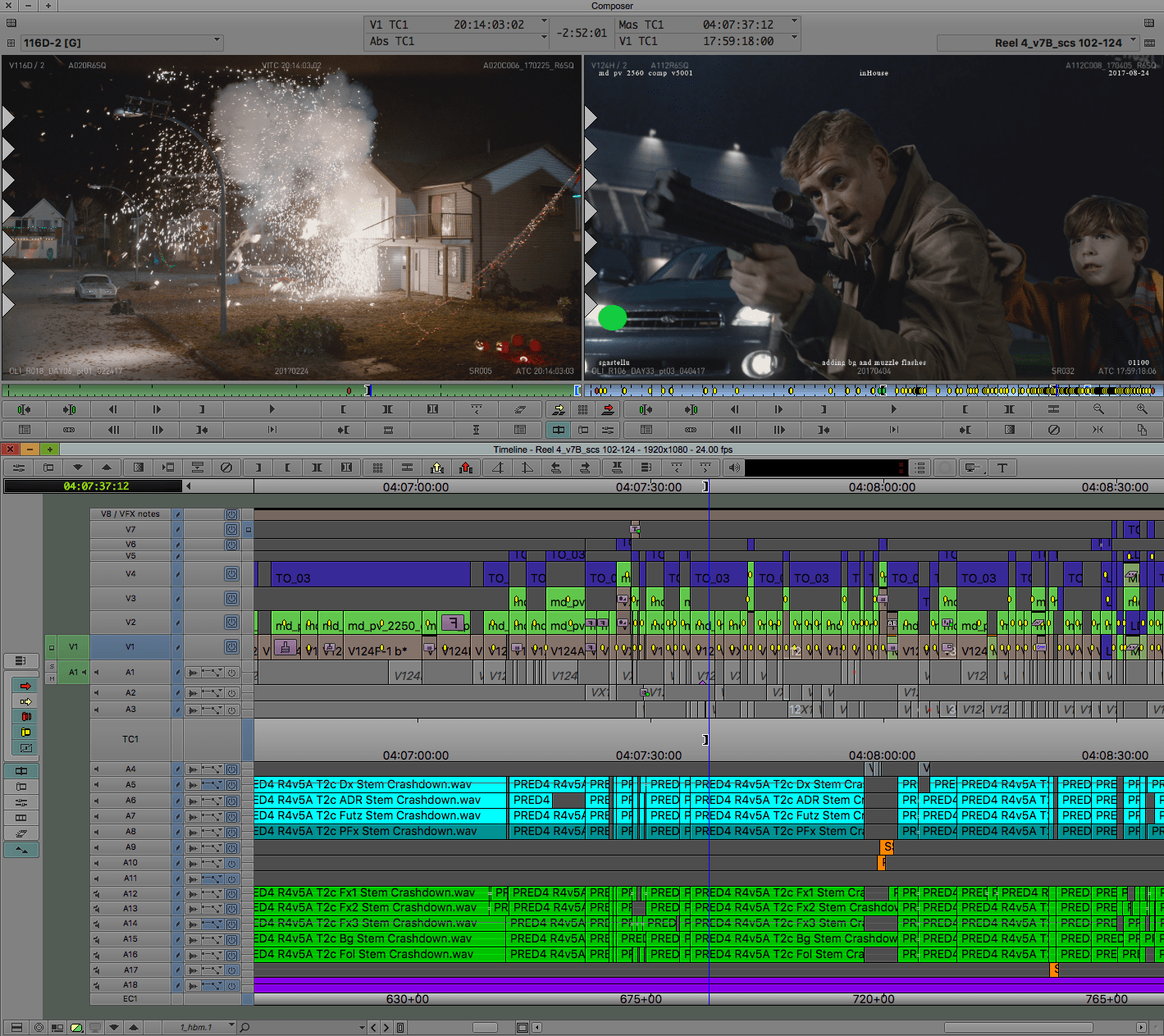 In the Media Composer, the source and record monitors aren't masked, but the output to the monitor is masked for 2.35:1. The Smart Tools are kept on, except for the Yellow arrow. A4 is for additional production dialogue, while A9-A11 and A17 are for added SFX or MX.

Knowing how a director approaches telling the story is useful for any editor, and it’s one of those things that comes with experience in the business. “I’ve worked with Shane Black on two projects—Edge for Amazon and The Predator. I’ve learned he never wants to look at the edits while shooting, because he knows if he has enough pieces.”

The first time Shane saw the whole movie was the editor’s cut. And that’s when we’d go over every line of dialogue, every performance, every edit, every trim in a very detailed way.

This approach relies on the consistency of the software, because it requires trustworthy access to media files and version management. “It was a heavy visual effects movie, and once you get the visual effects, we would have to think about the scene again. We tested fourteen different versions of the movie. We cut the movie literally until the day of delivery. It was a living, breathing thing.”

It’s amazing how much you can learn about editing by trying it many different ways. 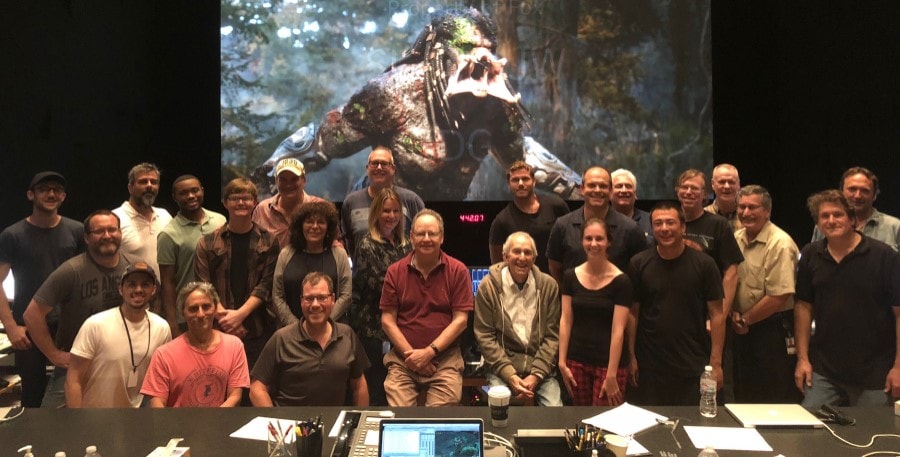 The Predator Post Crew on the last day of the mix. Harry is wearing a red shirt in the center. Pretty much everyone here used Media Composer or Pro Tools on the movie.

The evolution of storytelling

One of the themes of The Predator is the process of evolution, and how technology helps drive and define it. Moviemaking is changing rapidly, due to developments in storage and bandwidth, and the way people consume content.

What’s happening recently is that the number of feature films is dwindling. Episodic series work has exploded and that’s where the real creative energy is. That’s where writers and directors can try out ideas.

These ideas have led to an explosion in the total number of finished hours of viewable programming, and much more of it is delivered across streaming networks. “A few years ago it was Reality that was taking over, and there weren’t a lot of opportunities for writing and developing stories. That’s changing now. Netflix has led the way. They’ve realized that if you own the content, you own the process.”

The processes in editing remain similar for storytelling, with norms that support different types of stories. Whether in a feature film or a television series, the rules of creating drama, action, adventure, horror and comedy still largely apply. “There’s not really a difference in the way you put a TV show together or a movie. The real difference is in working on large formats like IMAX. You’re holding onto shots longer because the images have to be more immersive.”

The budget for a series is treated differently from a film, which is a factor in any kind of story. While there are many more viewable hours, those hours are a great deal cheaper to produce. This means the writing is one of the things that are treated differently for each format. “When I work with an episodic producer it’s more about dialogue. Showrunners in television tend to focus on dialogue.”

Shane also likes to focus on dialogue. One of my favorite scenes in the movie was all dialogue, where six people were all talking at the same time.

As in every story, dialogue adds depth and reveals character, especially conflict. Harry discusses the scene where the team was in the motel room, one of the few opportunities in the fast-paced story to learn about the characters. “It was rapid-fire, and we cut it in a way that had an energy—the same kind of energy found in the action scenes. Shane loves reversal. From the bus scene, here’s these two characters abusing each other, and it turns out they’re best friends. That sort of thing is really what the movie is, about these people and their histories.”