Industrial Media and its Emmy®-winning television production company, The Intellectual Property Corporation (IPC), are adding a new production hub in New York City. It is the first step in the company's goal of collaborating remotely with directors, producers, and editors throughout the country. "Up until this point, our editors worked 98 percent of the time on-site in Los Angeles and Atlanta," states Eric Towler, IPC's Vice President of Post Production. "The ability to treat somebody who works 3,000 miles away as though they're just down the hall is very appealing. We're getting into that with Avid. It will be a huge advantage to be able to work wherever we find talented editors, filmmakers, and story producers."

In the three years since it opened its doors, IPC has produced a range of content for networks, cable companies, SVOD, and digital platforms, including Netflix, Amazon, A&E, Showtime, and Oxygen. Under the management of co-founders, Eli Holzman and Aaron Saidman, the company produced the critically acclaimed shows, Leah Remini: Scientology and the Aftermath and Active Shooter.

The concept of being able to utilize shared storage virtually anywhere we find a talented editor who needs to work from wherever they are located is very exciting. We know we’re going in a great direction and Avid is a huge, huge part of the confidence we have in these decisions.

"We like to think of ourselves as documentarians of real human stories and we work with whatever networks or platforms want to tell those stories with us," explains Towler. Towler along with Spencer Wolf, IPC's Director of Post Production, currently oversee post production of 42 shows for Industrial Media, including series presentations, pilots, and pitches. They build and maintain the post-production infrastructure which allows the team to focus on the quality of the content, supporting Industrial Media's mission to tell stories with integrity.

Building a foundation for remote collaboration

About half of Industrial Media's new 14,000 square foot facility in New York City is dedicated to post production. It has 16 edit bays, a server room, rooms for eight assistant editor stations, and a number of story stations. The other half is creative space designed to bring in new business with directors and producers. "We're finding that a lot of the talented filmmakers, producers, and editors, who are making the kinds of programs Industrial Media is interested in making are New York-based," explains Towler. 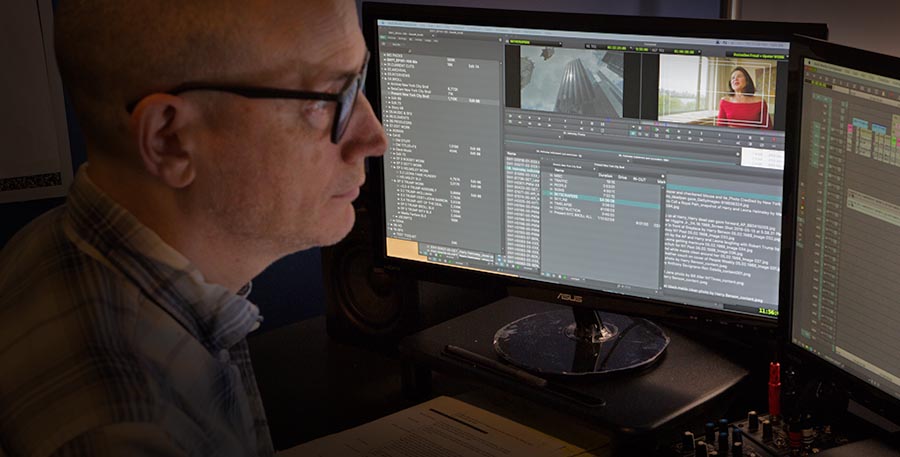 With a tight six-week schedule to open its new production facility, Industrial Media turned to Avid partner, T2 Computing, to build a technology infrastructure that would enable the company to meet the needs of its creative teams and keep pace with changing technology. They built an Avid post-production environment with 20 Media Composer | Ultimate editing workstations and an Avid NEXIS | E4 software-defined storage system. Avid NEXIS offers real-time editorial collaboration and high scalability and performance enabling Industrial Media to share and access media assets with anyone, anywhere.

"We need shared storage and there is really no option other than Avid in terms of reliability and scalability," said Wolf. Wolf adds that in many cases, his team works on co-productions that start in an Adobe Premiere ecosystem. "In our world of shared projects, the way editorial can communicate together on projects with Avid compared to other editing tools, is night and day. There's no comparison."

"As we built out Atlanta and then New York City, we did not look at other solutions in terms of shared storage or editorial platforms because of our experience with Avid as well as the talent pool of experienced Avid editors. Avid gives us access to some of the best editors. One hundred percent. The talent pool that is Avid-based is deep, and rich, and seasoned."

Industrial Media is already busy developing content in New York City including documentary features for YouTube and HBO and a series for CNBC. "Our partnership with T2 and Avid actually has a lot to do with my excitement about New York," explains Towler. "I feel we've already got the base layer of everything we're going to need. If there are problems that come up, because there always are in this business, there will be solutions right behind. That gives me a lot of confidence."

The ability to treat somebody who works 3,000 miles away as though they’re just down the hall is very appealing. We’re getting into that with Avid.

Meeting the challenges of changing technology

As Towler explains, his major challenge is dealing with ever-increasing demands on post production and finding ways to say 'yes' to whatever comes along, including larger format files, UHD, 4k, and 8k. "We want to be leading the charge forward. We've been finding more and more that when we look to Avid to find ways to accommodate new technology, Avid's tools are already there or arriving shortly. Avid is as ahead of the curve as it needs to be and it's helping us adapt to new and challenging adjustments to our industry."

Towler and Wolf don't know the exact path Industrial Media's expansion will follow, but they are laying the groundwork in New York City. "The concept of being able to utilize shared storage virtually anywhere we find a talented editor who needs to work from wherever they are located is very exciting," concludes Towler. " We know we're going in a great direction and Avid is a huge, huge part of the confidence we have in these decisions. Avid is the absolute foundation of our post processes."