Mix two talented artists with different ideas about how the mix should sound on the same tour.

VENUE snapshots allowed engineer Wayne Trevisani to quickly establish starting points throughout each song, enabling him to concentrate on the artistic parts of his mix.

Veteran FOH engineer Wayne Trevisani is on the road again, this time manning the faders of a VENUE D-Show System for artists Jay-Z and Kanye West on their Watch the Throne tour. Trevisani, whose touring credits range from Iggy Pop and Ted Nugent to Julio Iglesias and John Hiatt, is a classic case of an old-school analog guy who has not merely adapted to digital—he’s embraced it.

“When I decided it was time to go digital, I did my research,” Trevisani says. “I’ve mixed on most every analog console, and I know the sound I’m looking for. So when we made the leap to digital, we did some really critical console comparisons. And VENUE won, hands-down.”

Discovering the full potential of VENUE

Once he made the switch, Trevisani wasted no time in mastering the capabilities of the VENUE system. “In the analog world, I’d never daisy-chain multiple devices,” he stresses. “But with the VENUE, I can put multiple plugins on every channel, with no degradation of signal.”

Using Virtual Soundcheck is a great way to establish a certain trust with the artist.

Trevisani’s system for this tour consists of a D-Show console and VENUE Stage Rack with 48 inputs on stage, using a single DSI card to take advantage of keeping the band’s digital sources in the digital domain. He’s partial to Waves plugins, including the Renaissance and C4 Multiband compressor, though he still uses a few choice pieces of outboard gear. “I still like using a TC 2290 for my delay, and I use a Tube Tech for Jay’s voice, because that’s what they used in the studio.” 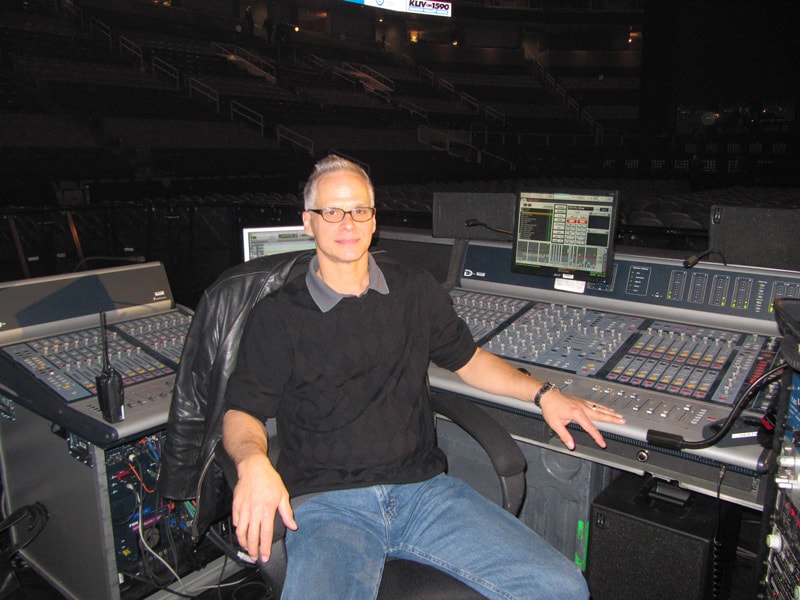 Trevisani is a big proponent of the VENUE system’s snapshot automation, which he utilizes to its full potential. “Using snapshots is a great tool, and it’s largely misunderstood and underused by a lot of audio engineers,” Trevisani says. “I’ve noticed that a lot of engineers tend to shy away from using them because they’re under the impression that a single snapshot will reprogram the entire console. But I often use them just to program specific parameters—to literally do just one thing. For example, I’ll sometimes use a snapshot to just slightly and subtly adjust a compressor setting midway through a song.”

Trevisani is still very hands-on in his approach. “I don’t do it often, but sometimes I’ll use multiple snapshots on a song,” Trevisani says. “I’ve got one song where I know the crowd’s going to be cheering during the opening bars, so I start off with a slightly hotter level, then use a second snapshot to back it down a shade. But I’m still an analog dude at heart, and I still mix the show that way. I’ll use the snapshots as a starting point, but I’ve still got my hands on the faders the entire time.”

With VENUE I can put multiple plugins on every channel, with no degradation of signal.

A tour like this one does pose its own set of challenges, which is another area in which the VENUE system’s automation comes in handy. “I’m mixing for both Kanye and Jay-Z—two very different artists, with somewhat different ideas of how it should sound,” Trevisani says. “Our main concern is wrapping the power of the music around their vocals, and I don’t want to always be concerned about, say, changing the effects setting on an instrument in the middle of a song. I’d rather utilize the console to handle those tasks, so I can concentrate on the more artistic parts of the mix. It’s like having an extra pair of hands on the faders.”

He records each show to a Pro Tools | HD system, which also enables him to take advantage of the VENUE system’s Virtual Soundcheck functionality. “Kanye’s producer and musical director, [Grammy Award winner] Mike Dean, who also works with him as a writer and engineer in the studio, spent time with me at FOH,” Trevisani says. “Mike is a self-professed analog junkie—we used four original Moogs on this tour—and he and I worked together using Virtual Soundcheck to program some of the mix and effects settings, making sure the instruments and tracks worked with the vocal for maximum impact. Again, it enabled us to utilize snapshots to set a compressor or boost a certain frequency in a certain song at a certain time to get the dynamics right.”

But Trevisani says Virtual Soundcheck performs an even more vital role. “I’m able to bring the artist out to FOH with me to listen to the house mix and make sure they’re happy with it. That, to my mind, is a really cool thing about Virtual Soundcheck. After all, I’m the link between the artist and the audience. The artist is up on stage, behind the speakers, and even if they have a great monitor mix, they have no way of knowing how it sounds in the house. “Using Virtual Soundcheck is a great way to establish a certain trust with the artist. And knowing what it sounds like in the audience gives them a lot more confidence when they go onstage. That means a better performance, and that’s good for everyone.”