Pro Tools enables Galindo to work more efficiently and intuitively, so she can stay on top of multiple sessions and make more thoughtful mastering decisions

"A lot of kids don't usually say they want to be a mastering engineer when they grow up." But Jett Galindo wasn't a lot of kids. Now a prominent mastering engineer and vinyl cutter at The Bakery in California, Galindo has mastered projects for such diverse artists as Barbra Streisand, Weezer, Selena Gomez, Neil Young, Pink Floyd, Randy Travis, Colbie Caillat, and Rancid, as well as the soundtracks for La La Land, Cars 3, Star Trek: The Motion Picture, Pokémon Red/Blue Piano Collections, and No Straight Roads.

As a kid growing up in the Philippines, her love for music and technology drove her to sing, play multiple instruments, and tinker with computers. She just didn't realize how the two would perfectly collide in her life a few years later. Or the role Pro Tools would play. Or even what music mastering was.

So, what is music mastering?

In a nutshell, mastering is the final process in music production where a stereo mix is optimized for playback on different listening formats, such as digital distribution, CDs, high-res audio, and vinyl. The process includes removing unwanted noise, optimizing volumes, and bringing better tonal balance to the overall mix. Simply put, mastering can make a good mix sound better. 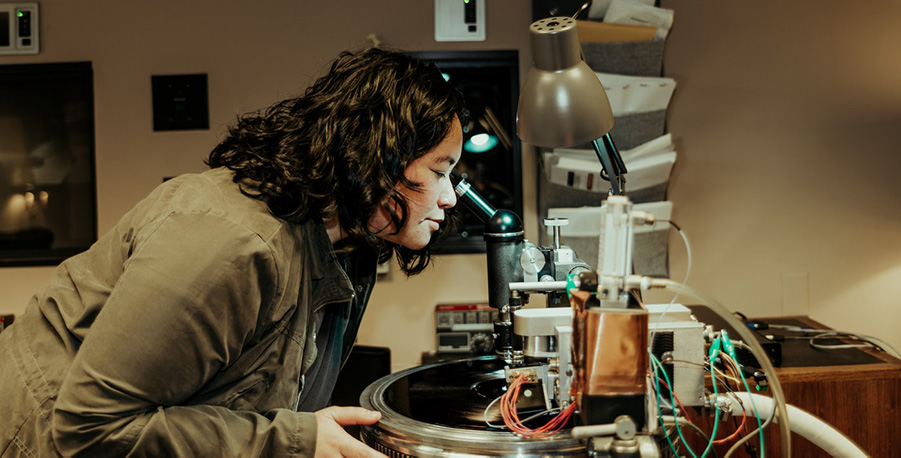 Although Galindo was surrounded by music in the Philippines (her parents managed and taught pop rock cover bands), she was undecided about a career. They didn't want her to choose music, so she entered college as a psychology major ("because it's versatile").

But music soon crossed her path and she joined a prominent choral ensemble, touring Europe, Asia, and the US. That's where a friend who attended Berklee College of Music introduced her to the world of music production and engineering.

"It was an instant lightbulb moment where I knew exactly what I wanted to do," she remembers. "There's no other career path that made sense to me."

Back in the Philippines after the tour, she found a recording studio looking for interns—an internship that almost didn't happen. "At the very last moment, the senior engineer found out that Jett Galindo was a girl," she sighs. "Thankfully, it was too late—I was already signed off to be an intern."

It was there, "on November 1, 2005," she recalls exactly, when she first started using Pro Tools. "It was just natural—it just felt right," she remembers. "Pro Tools has been part of my career, literally, from the start."

Galindo worked her way up to become the studio's house recording engineer before leaving to pursue formal training at Berklee, where she developed a keen interest in mastering and dedicated her studies to the craft.

After graduating, while working as an engineer at Avatar Studios in New York (now known as Power Station), her mastering professor called about a once-in-a-lifetime opportunity to work alongside Grammy-winning mastering engineer Doug Sax as his assistant at The Mastering Lab in California.

"He's considered the grandfather of mastering—the very first mastering engineer to open an independent mastering facility," she fondly remembers. "He's known for mastering The Doors, Pink Floyd, Ray Charles, Diana Krall, all these amazing names. When I got that lead, I'm like, F*** yeah, and threw my resumé in there!"

Galindo landed the job, moved west, and hasn't looked back, climbing the ranks to become a highly sought-after mastering engineer in her own right. 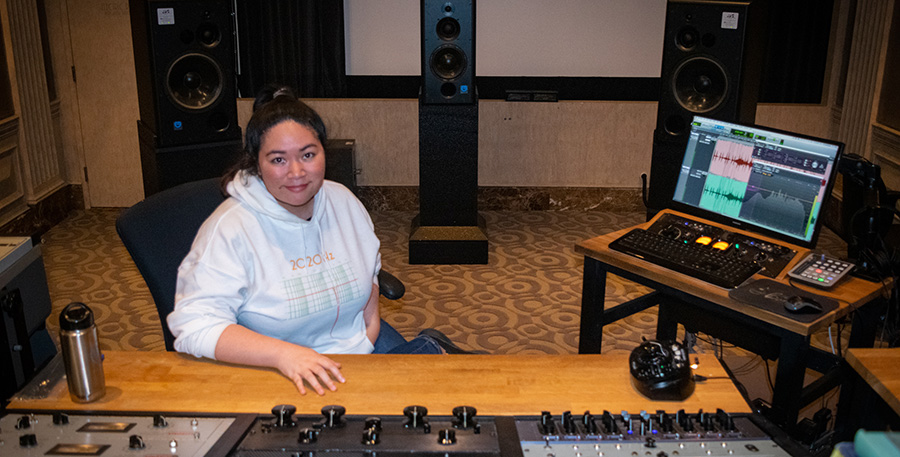 For Galindo, her DAW of choice is clear: "Pro Tools has been very integral to my career as a mastering engineer and a vinyl cutter."

"There's no one right way and there's no one direction towards getting the final sound," Galindo says about her mastering approach. Using Pro Tools to play and lay out mixes, she starts by listening critically to the music, from beginning to end, to formulate a game plan, including the mastering chain—the linear order of all processing the signal will be put through.

She then focuses on sculpting sounds using microscopic EQ adjustments to bring better tonal balance to the mix. If the energy needs to be tightened, she might reach for a compressor but often feels it's unnecessary.

For those eyeing compressors to achieve the loud, hard-hitting sounds of today's pop music, she warns: "Compression can actually do the opposite. If you want your music to be a wall of sound that just hits you, where you feel all the details envelop you, compression can potentially take that away because you're constricting all the transients, as opposed to making them louder."

She credits Pro Tools for helping manage her heavy workload. "Pro Tools has become second nature to me—it's a direct extension of my ears, brain, and hands. This has allowed me to stay on top of multiple sessions while staying efficient and keeping myself attuned to thoughtful mastering decisions… [It's] allowed me this freedom as a mastering engineer to be more intuitive and musical with my workflow and thought process."

Her go-to plugins? "FabFilter is amazing," she raves. "L 2 is a pretty solid, uncomplicated workhorse for limiting. iZotope RX 8 is also a favorite. It's mostly known for noise reduction, but I found it to be a uniquely versatile tool that's helpful when mastering hard-hitting genres, like EDM, rock, and hip hop… For vinyl cutting, NUGEN Audio Monofilter… For challenging phase-y bass effects, it's one of the few tools that's able to control that low end while keeping the clarity intact." 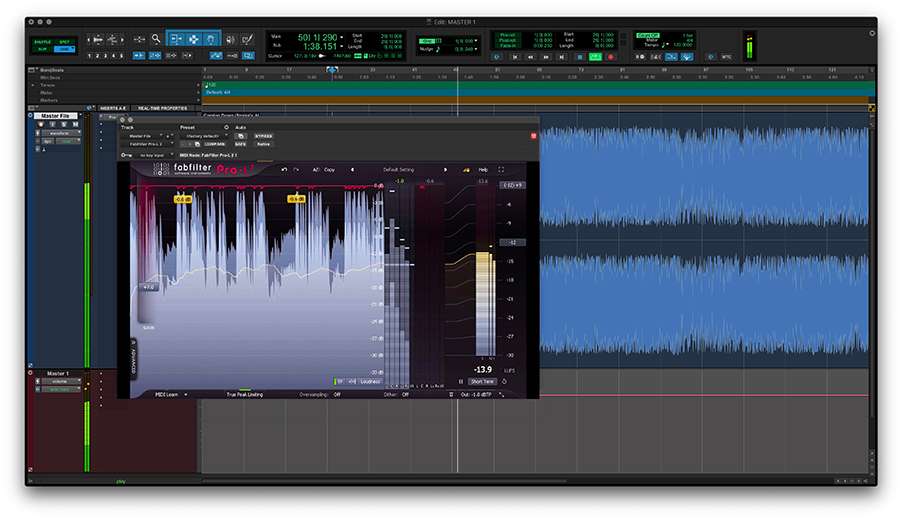 A big favorite in her toolbox, Galindo uses FabFilter Pro-L 2 in just about every mastering session.

She's also a big fan of Pro Tools plugin automation: "You have a huge amount of control over every little parameter, along with the ability to do adjustments down to a tenth of a dB. It's saved my butt countless times throughout my career!"

If you want your music to sound the best it can be, you don't need fancy plugins or expensive gear. Galindo is adamant that you'll get better results by developing your critical listening skills using the plugins you already have, such as the EQs, compressors, and limiters included with Pro Tools.

"Musicians and creators already have a lot of mastering tools in their arsenal, so the thing that's crucial is listening," she stresses. She recommends offering to master other people's music. "Collaborating with people and having them push you towards making mastering decisions, it forces you to get out of your comfort zone and get better… The more you collaborate, the more you're able to expand your limitations and be more openminded to what's out there." 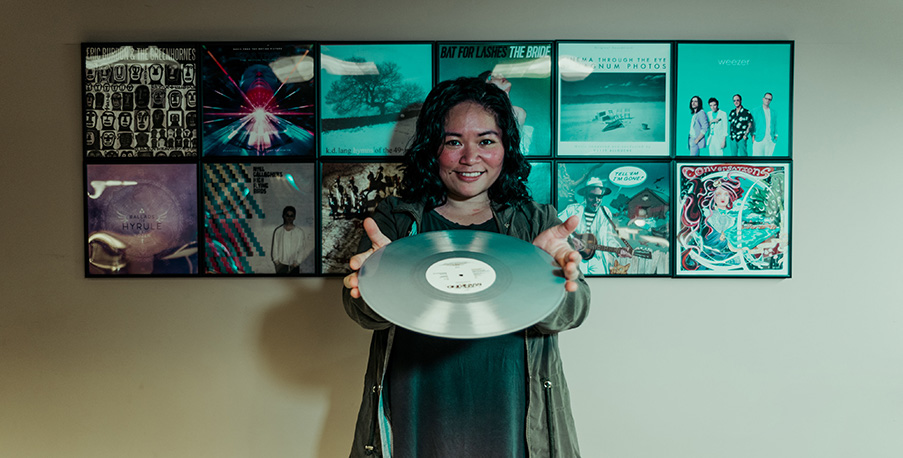 Thanks to the vinyl revival, Galindo proudly displays her handiwork.

Ultimately, she feels that mastering is not about how many tools you have but the person wielding them.

"Rather than collect 10 EQs, work with one EQ and learn what it can do for every adjustment and every EQ shape," Galindo advises. "Learn how each plugin in your arsenal behaves… Be obsessive with audio adjustments that are less than 1 dB… A/B test every step of the way… The more you get attuned to the function of each little tool you have in your toolbox, you become more powerful. Because at the end of the day, the thing that really evolves is not the tool but the engineer. It's the human that makes all the difference."