Director Matthew Vaughn is known for his fast-paced, fun movies, filled with swift cuts to delineate dramatic scenes that are packed with color, impact, and action. His latest outing, Kingsman: The Secret Service, is another classic case of his trademark style.

The action-comedy movie follows the recruitment and training of a young delinquent into a spy organization as a secret agent who saves the world from an evil plot to cull the population of Earth. Based on The Secret Service comic book series by Mark Millar, Colin Firth, and Samuel L. Jackson star in the comical, yet exhilarating visual experience that has already proved a massive box office hit.

Contributing to the action was the highly talented editing team. Led by editor Eddie Hamilton ACE, a long-term collaborator with Vaughn on other stellar movies including Kick-Ass and X-Men: First Class, who’s renowned for his breath-taking attention to detail.

I come back to Media Composer every time because of the way it allows you to collaborate with your colleagues. 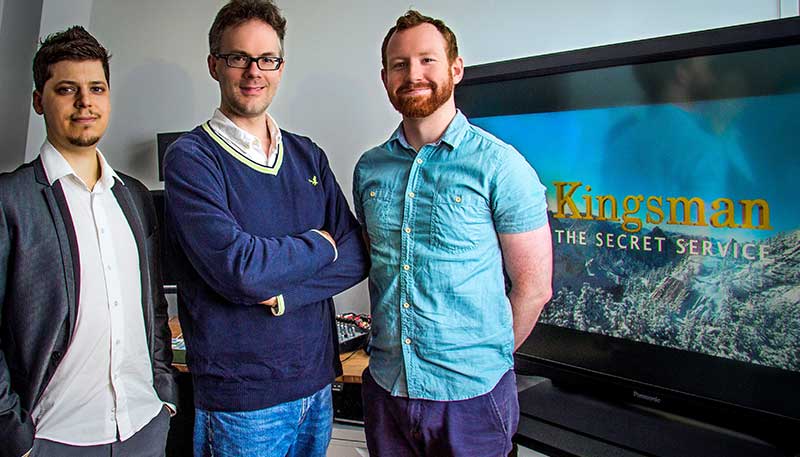 To give free reign to his considerable storytelling skills, and also effectively balance the multiple plot strands, Hamilton had to work at great speed, relying on a customized workflow and muscle memories developed from years of working with the industry’s most trusted editing solution, AvidMedia Composer (now Media Composer | Ultimate). Supported by his team, he was able to bring Vaughn’s vision to fruition, taking advantage of the media management and collaboration capabilities delivered by the industry-leading editing system.

“The hardest thing about movie storytelling in Kingsman is that we are following multiple characters,” says Hamilton. “It’s figuring out how to balance each individual journey throughout the movie so that the audience can keep track of them, but also not get bored.”

Handling the pressure with Media Composer

Hamilton is somewhat of an Avid veteran, having used Media Composer for 20 years. “I've tried other systems, but I come back to Media Composer every time because of the way it allows you to collaborate with your colleagues. Collaboration and stability are vital on any project, especially a big budget, blockbuster movie, and the media management in Media Composer is bulletproof. Managing 300 hours of footage, plus thousands of iterations of visual effects shots and numerous channels of recorded sound is no mean feat. It’s important to keep track of everything and Media Composer does that for me.”

The beauty with Avid is that you can have multiple editors and assistant editors working on the same sequences, hassle free.

Feeding the media machine was the preserve of Riccardo Bacigalupo and Ben Mills, who had both been first assistant editors for Hamilton on Kick-Ass 2. Due to the length of the project, legendary editor Jon Harris, and half a dozen assistant editors, were also involved at various stages of the film, working on picture and VFX.

“Eddie and Jon worked closely with Matthew on the creative side of the storytelling,” recalls Bacigalupo. “Eddie, Ben and I had previously worked together on Kick-Ass 2, so in the cutting room we’d developed an efficient system for our Media Composer project management, and for distributing work between each other and our fellow assistant editors.”

Bacigalupo handled the sound and music, issuing turnovers to the composer and sound departments. Given that Mills had experience of VFX editing, it was natural for him to take on this role.

“I took charge of turning over VFX, making temporary mock-ups of VFX shots using the effects tools in Media Composer, and aiding Eddie and Matthew overall to visualize VFX shots at the early stages of post-production,” explains Mills. “I don’t ever feel the need to jump out of Media Composer and into other pieces of software to create temporary shots. You can pull a decent key and use the tracking tools to a high degree. It helps to get the idea of the shot over to Matthew and Eddie easier and quicker than having to mess with other programs, especially given that you can save a preset for pretty much every effect available in Media Composer. Kingsman: The Secret Servicefeatured sequences of handheld footage, so being able to turn around mock-up VFX shots and track shots easily in Media Composer allowed Eddie and Matthew to view them in a short amount of time.” 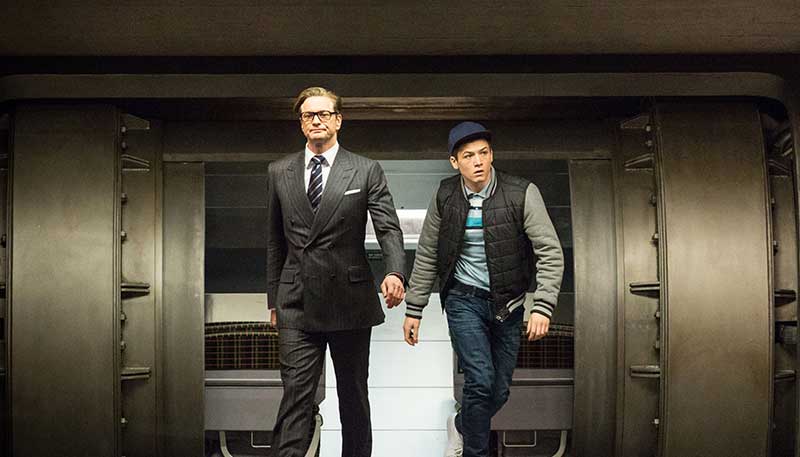 According to Mills, Media Composer also made the project easier to manage. “In VFX editing, management is key and Media Composer is always a god send,” he adds. “The use of markers, decomposing shots with handles, and being able to chop up a long sequence and make it more manageable really helps.”

Thanks to Avid, I can customize my workspace and make it flow how I want, enabling me to have everything I need at my fingertips, at all times,” agrees Hamilton. “With Media Composer, my muscle memory kicks in and I get to work incredibly quickly—almost as fast as someone can talk, I can be making changes to the sequence.

When approaching a scene, Hamilton doesn't watch all the footage straightaway. “I tend to watch one wide shot then throw together an assembly as fast as I can, so I have a working cut scene. Then I can see what the strengths and weaknesses of the scene are. In the big jigsaw puzzle of the edit, I know the kind of golden moments I'm looking for to fix certain problems in the scene. After I’ve watched the footage through, I build up a large selects roll of all the takes. I have all the best line readings from every take, from every angle, so that I can compare different line readings from each actor. That way, if the director wants to come in and see alternate line readings, I have them all ready to go.”

Kingsman: The Secret Service features a number of intense action sequences including a massive skydiving sequence that the editorial team had to assemble from around 15 hours of footage, yet amounts to around just four minutes in the movie. “There are no shortcuts,” says Hamilton. “You have to watch all the footage, slowly choose great bits and whittle them down into a sequence. That scene took about a month of intensive hard work, but it’s an incredibly exciting sequence in the film.”

According to Hamilton the team faced a similar situation when building the end of the movie. “There were a lot of stories that had to be cross-cut, including a lot of parallel action featuring all the key characters, a gathering of the villains and an end-of-the-world countdown. This climactic 25 minutes of the film took two or three months of endless refinement, putting in the hours and taking the time to watch, re-watch and continue to polish until it was perfect.”

Hamilton also spent a great deal of time perfecting the sound and diverse soundtrack with Bacigalupo. “The sound and the music departments all used Avid Pro Tools, so we were able to move files back and forth very easily between Media Composer and Pro Tools,” he explains. “We sent DNxHD QuickTime movies as picture references, alongside AAFs, WAVs and Change Lists so they could easily re-conform to the latest cut. When it was time to mix the sound and the relative levels of dialogue, Matthew had already chosen all the effects and music over a period of several months in the edit suite. Essentially they took the mix that we had done and turned it into a 7.1 and Dolby Atmos mix version, with clean dialog, foley and many instrument tracks.” 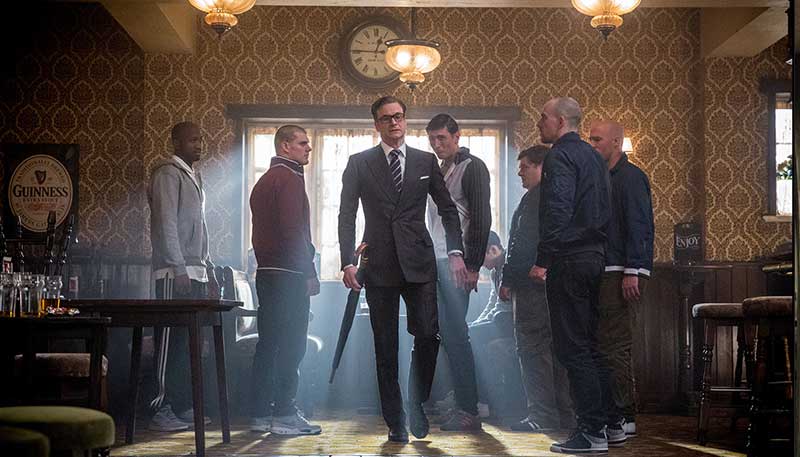 Hamilton continues, “On the day of the final mix, we played the mix that I’d done to the dubbing mixers so they could hear the intention that Matthew and I had in mind for the film. Whenever they were in doubt, they could refer back to that mix on the Media Composer timeline. I've refined that process over the last 15 years and it just gets better and better.”

The management system at the heart of Kingsman: The Secret Service was the Storage Suite’s powerful Avid ISIS | 5500 shared storage system, enabling the team to sustain a real-time workflow. “The scalability and flexibility of ISIS made adding and removing systems a breeze,” says Bacigalupo. “It meant detailed, organized media management and segregation of files could be taken care of quickly and easily. ISIS provided the backbone of the cutting room and was broken down into multiple partitions to keep the footage organized.”

“The beauty with Avid is that you can have multiple editors and assistant editors working on the same sequences, hassle free,” adds Hamilton. “The moment I filled a bin with one of my sequences, one of my assistants could open it and review what I had been doing. That kind of powerful, collaborative workflow has been around for many years on Avid, and only improves with each update.”

“The collaborative approach Avid has taken to project management made it so easy for editors to split the scenes between each other,” agrees Bacigalupo. “They could do their creative work and then pass it on to the assistants, so that we could independently process and deliver the cuts to the relevant parties—director, producer and studio. I could break sequences down, delegate work to the other assistants and then continue with my own work as well.”

...For me, Media Composer is the only system to use for big-budget movies—and the award-winning results speak for themselves.

Harnessing the power of presets

Outside of the cutting room the file management and sharing of bins made it very easy for work to move back and forth between the assistant editors and Hamilton on set, who was working on his laptop edit station.

“At Eddie’s request, I had a copy of the film on an encrypted G-RAID drive, which was continuously updated,” explains Bacigalupo. “Eddie could take it with him and was able to edit on the go. This was particularly useful when he was requested on set during the shooting of complex action scenes such as the memorable pub and church fight sequences.” 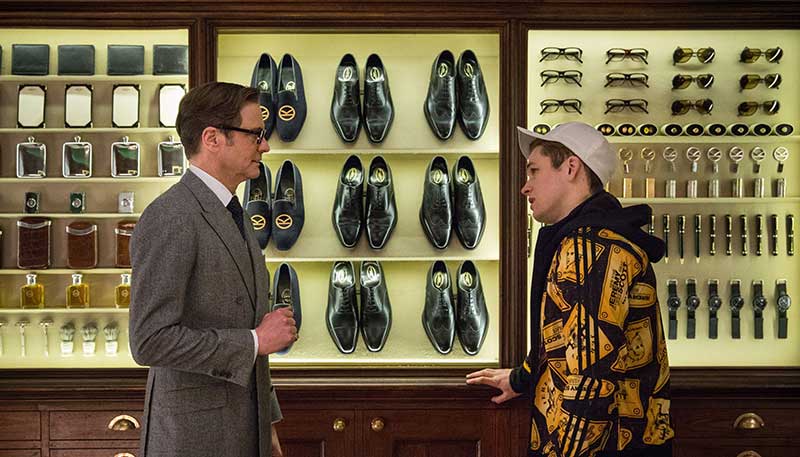 Hamilton adds: “The flexibility of Media Composer meant we were able to temporarily set up a station at the director’s house when it was required to review the film with files moving back and forth with the cutting room, keeping the two setups in sync. The way that Media Composer builds its media databases means that you can switch to another system and everything is available immediately.”

With Media Composer, my muscle memory kicks in and I get to work incredibly quickly—almost as fast as someone can talk, I can be making changes to the sequence.

Another facet of Media Composer that greatly benefited Hamilton was the power and flexibility of workspaces. Bacigalupo continues,“It’s so useful to be able to custom design the layout of the GUI windows for different displays and screen resolutions. I was able to save them to my settings and have them available to apply at the touch of a button. This was especially useful when moving between different systems in a cutting room where there may be monitors of differing sizes and resolutions. Avid recently added the ability to do the same with bin layouts too, which has been a great benefit.”

He concludes: “There’s so much that I’m thankful to Media Composer for. There's the fact that I can call up multiple variations of a scene and compare them. The fact that I can mix sound so quickly and professionally. The color correction tools are terrific; I can make changes to the grade of the film if I need to, very quickly and professionally. Finally, the way it allows you to work with visual effects fluidly, building complex shots up very quickly and showing the potential of what can be achieved.”