KUTâs Legendary Studio Rises from the Basement with Avid

Mix on-air performances by a wide variety of acts while maintaining flexibility for further expansion.

D-Show and SC48 systems were chosen for their industry acceptance, tight integration with Pro Tools, and ability to cover everything from the loudest electric bands to intimate acoustic performances.

Acoustic consulting firm Harvey Marshall Berling Associates worked hand-in-hand with architects from the Lawrence Group to create a space that was flexible, dynamic, and acoustically sound. In addition to acoustics, HMBA designed all of the audio and visual systems in the station.

HMBA principal David Harvey identified the first challenge almost immediately. “The room itself had to accommodate a wide variety of acts, anywhere from a solo acoustic guitar performer to a very loud rock band,” explains Harvey. “We needed to provide a system that would give us the quality a listener would want in their living room while being able to deal with the high sound pressure levels that a rock band would generate.”

From analog to digital

After a generation of using analog boards in the basement studio, the KUT staff was looking to go with a digital console that enabled them to easily record and archive performances. Harvey, who had seen Avid’s live sound consoles in action at the 2012 Bonnaroo music festival, was impressed by their ability to increase the speed and efficiency of setup and knew what to suggest. 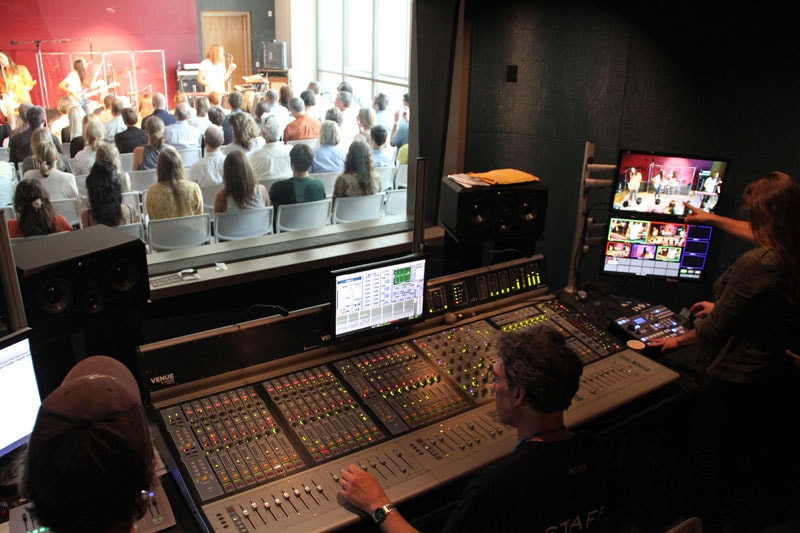 “From an equipment point of view we were very interested in Avid coming in,” Harvey says. “First of all, the sound engineers coming along with the variety of artists that play [at the station] are all familiar with the console, and the KUT staff had been using an [Avid VENUE | SC48] at another one of their venues. Sonically, we were excited about what the console is able to do, and the different input demands we had to accommodate for the space. Plus, it fit perfectly with the size of the venue.”

For these reasons, Harvey chose and installed an Avid VENUE | D-Show System in Studio 1A and an Avid VENUE | SC48 for Studio 1C. Keeping everything in the Avid environment also provided KUT a seamless interface with Pro Tools, which was important considering every performance is recorded and some are edited before going out over the air.

“Although it is a live room, [Studio 1A] had to be set up as a production facility for on-air broadcasting,” Harvey explains. “That interoperability with Pro Tools, with the ability to have that kind of instant capture and editing, was important.”

With the system designed and approved by KUT, Austin-based Big House Sound was engaged to handle installation. “It was an interesting project,” explains director of installations Zach Richards, “because Studio 1A is a hybrid venue. It’s a live broadcast and production environment,” says Richards. “It’s intense to see them get a show on-air because they’ll do a sound check and get everything dialed in, but there’s a very specific time when they’ve got to start. So, having a rock solid, reliable console is crucially important.”

Flexibility was also a key factor when choosing the studio’s console. “There’s a variety of different routing, patching, and cross-patching that’s happening on the fly because this is a live event,” Richards explains. “So, they needed to have a console that’s designed and road-tested for live applications.” 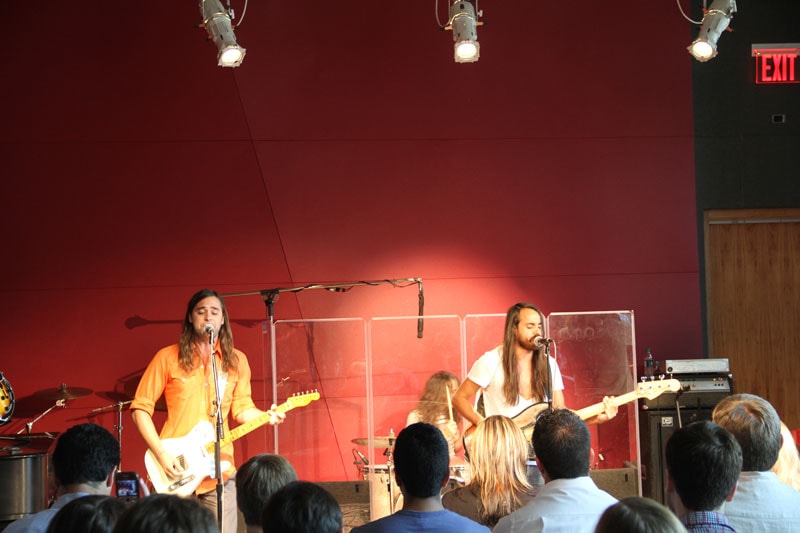 Todd Callahan, digital platforms content director at KUT, believes the purchase of the D-Show and SC48 have future-proofed the room. “We built in a lot of capability and made sure the boards had the ability to grow, just in case we do something in the studio spaces,” Callahan says. “So, I don’t see a hardware expansion for that room.”

KUT’s senior technical producer and longtime engineer, Cliff Hargrove, is as impressed with the D-Show’s fidelity as he is with its versatility. “The board has incredible headroom,” Hargrove says. “Unlike an analog board, where if you get to a certain point you start getting distortion and noise, I’ve never peaked out on this board. In fact, I remember Zach telling me not to worry if it went a little red on an individual channel because it would still sound amazing. That’s been true and it’s really nice.”

Having a rock solid, reliable console is crucially important.

At the same time, Hargrove is utilizing the power of the D-Show to get one mix together for broadcast and another for monitors, while making sure a good set of tracks gets out to the FOH engineer handling the audience mix.

The ability to easily take care of the monitor mix is refreshing for Hargrove. “I give people the option of headphones or [wedges], and they almost always ask for [wedges] because that’s what they are used to,” Hargrove explains. “Plus, we are doing a live broadcast and they feel more comfortable with a stage set up. But, if the drummer wants headphones, I can do that. And, having total control over each of the four mixes with the fader flip, I can see what’s happening and tailor the mix right there on the board. That’s probably one of the best features of the board for me.”

One of the added bonuses of bringing in both a D-Show and Avid VENUE | SC48, along with Pro Tools, is the consistency of technology within the facility. “I think it was very forward-thinking [of Avid] to keep everything compatible, so that show files can be transferred between consoles,” Richards says. 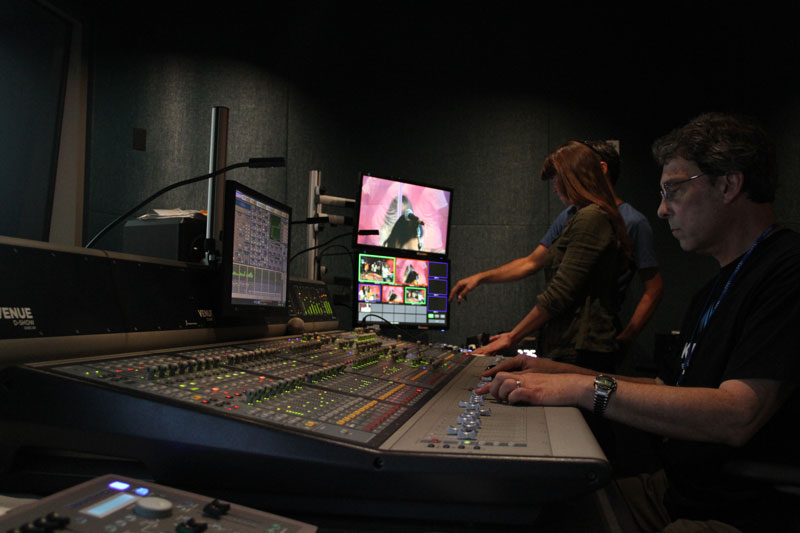 That point proved itself true during this year’s SXSW Conference when KUT hosted four straight days of events at the Four Seasons Hotel. The team packed up and took a pair of VENUE | SC48s (KUT owns two, one of which is in use at the Cactus Café in the student union building) and a Pro Tools rig to the venue. “It’s four bands a day, from seven in the morning to noon,” Callahan reports. “All live broadcasts. That was our go-to system, instead of renting something that we weren’t familiar with of lesser quality.”

In fact, those experiences have given them the confidence to use the VENUE | SC48s out and about more often. “We’re going 24/7 news and music, which means that we’re going to be front and center at a lot more events,” Callahan says. “At the ones where we will mix for on-air broadcasts, we’ll be taking an SC48.”

Overall, the full integration of Avid technology enables KUT to fulfill a portion of its mission to highlight the best of what Austin has to offer its citizens. “A lot of the musicians that play here are locals and not only are they getting airtime on a local radio station, they are also getting a recording of their performance,” Callahan states. “It’s not our goal to put everybody on the map, but it doesn’t hurt to give them this opportunity and exposure.”