The award-winning broadcasts are the work of the Media Arts Productions Group, a University-based production company that broadcasts from a state-of-the-art, mobile production truck. What started out as a learning lab to provide students with hands-on experience with the technology they will use in their careers, has expanded into a professional production company, completely staffed by students, and managed by faculty.

Engaging the fans with a more compelling story

Senior Isaac Shaw is the lead package editor handling the tape production. âIâm in charge of the melt reels, rollouts, and highlight packages,â explains Shaw. The Avid system replaced an older replay system, which Shaw notes did not allow them to create packages. âWith FastServe | Live Edit, weâve been able to hone in and figure out how you tell a story, how to put edits together, how to create clips, and have the flexibility to do it all.â

For a typical broadcast, the production team creates a long package at half-time, a longer package at the end of the game, and smaller player packages and highlights during the game. They set the FastServe system up for five inputs and three outputs. Two outputs are tied to one controller and another output is tied to a second controller. With the two-output machine, one person is marking the ins and outs for the replays. The second controller is doing the PSAs for the University, which they use for playback and building highlight reels.

âWith Avid we can centralize everything,â states Shaw. âI donât have to worry about which machine this package is on, which machine am I going to roll-out on, or which machine I do a melt on. My replay operator and I have access to all the files. So, if we need to change something on the fly, we can. This gives the producer infinitely more flexibility to tell the story. The product weâre putting out with Avid is much more of a professional grade because weâre adding context to the game.â

With FastServe | Live Edit, weâve been able to hone in and figure out how you tell a story, how to put edits together, how to create clips, and have the flexibility to do it all. 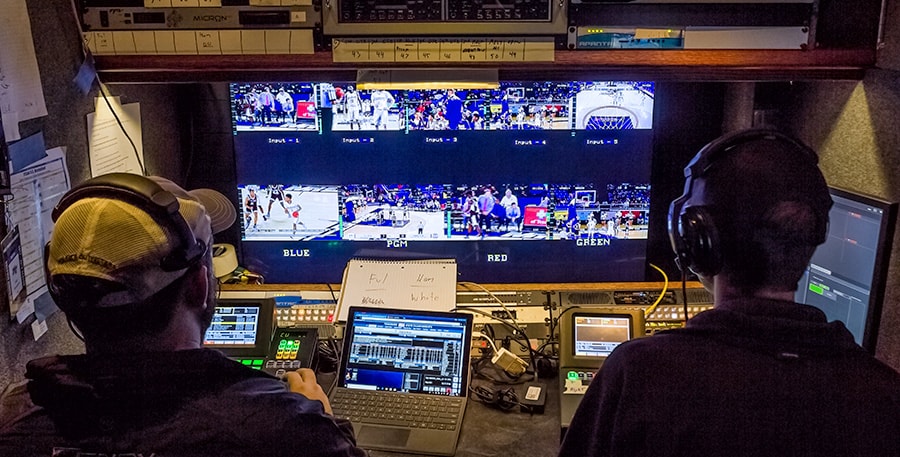 âAvid FastServe upped the game on our replay system,â states Marc Parrish, Chief Engineer for the truck and Director of Technical Systems for the Department of Media Arts. âNow that we have our replay position where it needs to be, our content is higher quality and more professional.â

The production team works closely with ESPN3 to get feedback on each broadcast and discuss ways to continuously improve the content. Eli Lilly is the ESPN3 School Liaison and Campus Production Coordinator and notes the Avid system has had an impact on MTSUâs workflow. âKnowing what other schools are using for their replay systems and the limitations they put on their operators, I have to say the Avid system helped make the Media Arts Productions Groupâs workflow more efficient.â

In fact, the increasingly high quality of the Groupâs productions is helping the Athletic Department gain more television coverage for its live sporting events and bringing the production team new opportunities to produce live events. Today, they produce 30 live events a year, covering MTSU football, basketball, volleyball and soccer games and some community events, including the CMA red carpet.

âThese games are revenue producers for the Athletic Department,â explains Nathan Wallach, Multimedia Specialist, MTSU Athletic Department. âThe Media Arts Productions Group has been instrumental in getting an increasing amount of TV coverage for our live sporting events because they have the equipment to produce high quality broadcasts. Our student-athletes love it, our coaches love it from a recruiting standpoint, and athletesâ parents appreciate the opportunity to watch their student-athlete on a network-quality broadcast.â

Positioned for the future

The Media Arts Productions Group is part of MTSUâs Department of Media Arts. Every position in the truck, with the exception of the engineers and the executive producer, is manned by a student. They also draw on students from the Recording Industry Program for audio and from the School of Journalism to do play-by-play, color and sideline reporting. Students interview for positions, are hired for their skills, and get paid for their work. It is an unusual arrangement, but one that positions students for their future careers.

The Media Arts Productions Group has been instrumental in getting an increasing amount of TV coverage for our live sporting events because they have the equipment to produce high quality broadcasts.

âWith Avid, weâre telling the story better, and our students are gaining invaluable, transferrable skills that prepare them for successful careers,â states Parrish. With 18 months of experience on the truck and poised to graduate soon, Shaw agrees, âBeing able to make quick decisions, create quick playlists and put packages together quickly has made me much more marketable to a potential employer.â