Myron’s Cabaret Jazz is an intimate 240-seat venue located in The Smith Center that first opened in 2012 and features some of the biggest jazz artists coming through Las Vegas. Led by head audio engineer Kevin Harvey, a longtime touring engineer who handles the front of house mix, as well as assistant audio head and monitor engineer, Kevin Ruschmann, Myron’s Cabaret Jazz recently upgraded its sound system—including two aging SC48 consoles—with dual Avid VENUE | S6L’s and a Meyer Sound LINA system purchased through PRG. Avid caught up with Harvey and Ruschmann to discuss the venue and its recently-completed upgrade.

Where does Myron's Cabaret Jazz fit in as far as events and acts coming through town?

Kevin Harvey: We do the bigger jazz acts, like Arturo Sandoval, Nathan East, Ramsey Lewis, and the San Francisco Jazz Collective, as well as pretty much the best of the Las Vegas local performers including Frankie Moreno, Clint Holmes, Lon Bronson, and Pop Strings. We have run up to around 61 inputs and 20 stage mixes in our little room. So we do cater to some pretty big shows. And we mix almost 95% of the shows. Very few people bring an engineer. I think we've had two in the last six months and that was for two nights. We really are mixing everybody. 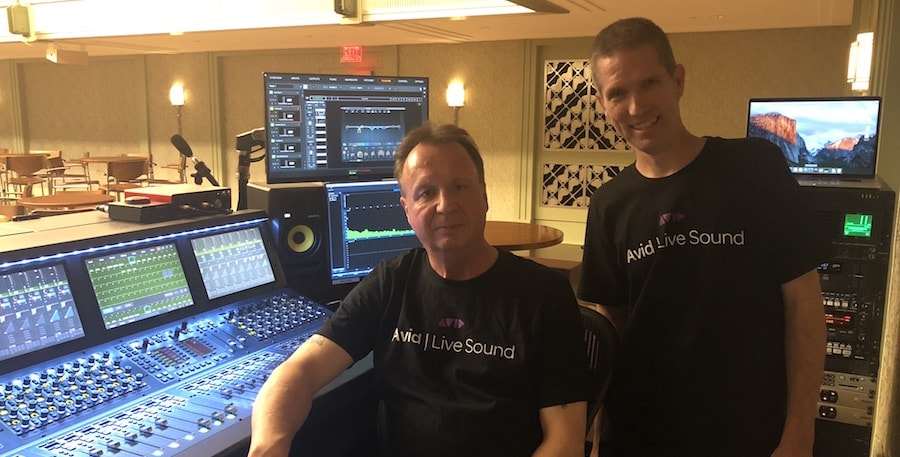 What was your background with VENUE consoles?

Kevin Harvey: I was on a DiGiCo for the last ten years I was touring. I also toured with a D-Show, and used a Profile for a couple of tours, so I was pretty familiar with the Avid range. So moving on to the S6L, there were a few things that were familiar and made life easier.

With the SC48’s we simply didn't have enough inputs to do the shows we were doing. When we had a 60-input show, I had to use a sub-console and then send stems up to the stage, which is far from ideal. Also, we couldn't load enough plugins because there is not enough DSP on an SC48. I tend to use a lot of plugins, so it was getting to be really awkward with the SC48s. But we did a lot of good shows on those SC48’s, and we got a lot of good reviews.

How did you approach making your decision about upgrading?

Kevin Harvey: I was a front of house engineer for Chicago for years, and I met Robert Scovill when he was out doing Pro Tools for us, 'cause we recorded a couple of shows in Phoenix and in LA. I actually met him years ago when he was mixing Rush. I respect his opinion. I knew he was an Avid guy, and I started watching a few videos. For me, it was a no-brainer—the S6L was the console. It is an astonishingly good console. I have used pretty much every large-format console out there, and this is the best console I've ever used, hands down.

Kevin Ruschmann: Another thing we were looking at when we were getting the console is flexibility into the future. We liked continually seeing updates and improvements on the console. We were basically looking for a console that could last for a long time but still be technologically relevant, and we saw potential in the Avid. 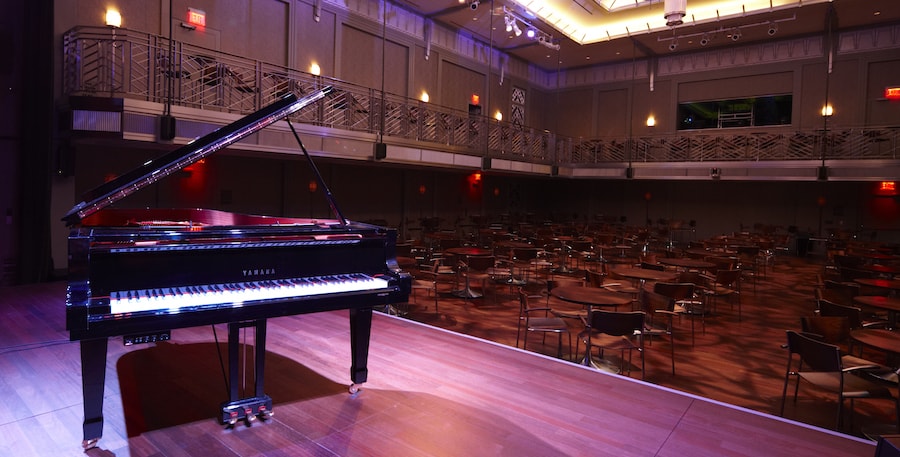 There are obviously a lot of similar workflows between SC48 and S6L with the common VENUE software and other features, but what are the standout features that really appeal to you?

Kevin Ruschmann: The sound quality is just amazing, the clarity, how responsive the console is for me. The quality of the in-ear sound I get between the SC48 and this is just night and day.

Kevin Harvey: You can hit the input pretty hard. It's got a really good front end to that console. The mic pres and the EQ are just spectacular, and we could hear it from the first show. I tend to abuse a console on my first drum check to see what it will do. I wanted to hit those inputs hard just to see how they responded. I was really pleased with how gentle the distortion was. I deliberately distorted it to see what it would do. It got fat, and then you could hear the distortion start to creep in. But it wasn't that brittle distortion that you would get with some consoles where you get that harsh distortion really quickly. It was much more rounded. It was there because I was clipping the input on purpose, but it was gentle. The difference between the SC48’s and the S6L was a bit of a shock because they are so clear. The high-end detail is just off the charts!

Kevin Ruschmann: Now that I have gotten some shows under my belt, the flow of the console is just amazing. I can get to everything quickly on stage as far as sending feeds to different in-ear mixes. I frequently use up to 12 ear mixes, including wedge mixes, and I really need to access things quickly. Just the flow of how quickly I can get a channel to a bunch of different ear mixes without going through a bunch of layers is amazing.

Kevin Harvey: The Layouts feature is really excellent and really easy to use. To me it seems obvious that sound engineers had some input in the design of this thing because it was built for guys to mix on. I won't mention other consoles, but they can be a little overly complicated. I find the S6L very user-friendly—probably the most user-friendly large-format console I have ever used. It has been a really good experience. 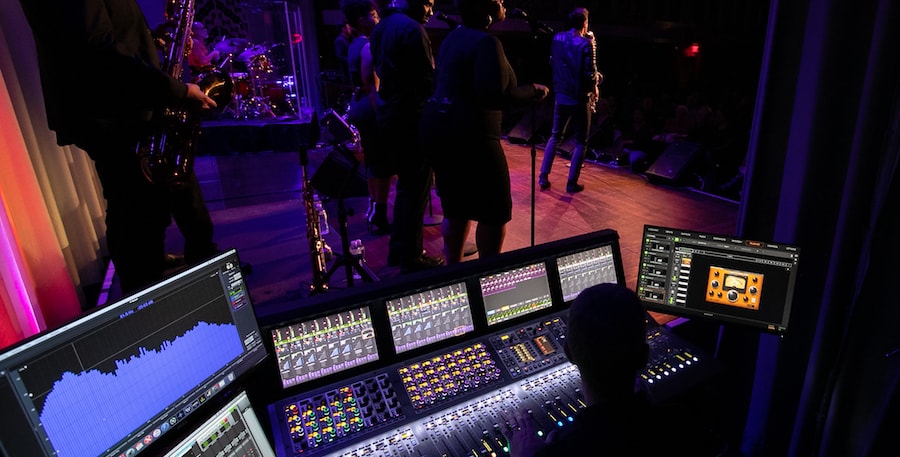 Did you find yourself relying on the software more in the beginning and then discovering new workflows as you spent more time on the desk?

Kevin Harvey: Yeah, that's exactly correct. I treated it a little similar to the SC48 for the first couple of shows until I really got to know some of the functionality, and then I started using more and more of the cool functions. It is an ongoing process.

Kevin Ruschmann: Now that I've got a feel for the console, I find myself using a lot of the encoders and staying away from the external screen. I would say that 75 percent of the time I'm on the encoders.

Kevin Harvey: I love having that many encoders. It actually flows like an analog console, to some extent. It is very straightforward. It has a huge amount of functions on it, but it is so well laid out that it's quite an easy process to start using the functions. I am still going, "Oh, there's something else I can do." There are some functions on this console that if you told me that they existed 20 years ago, I'd say you need drug rehab.

You mentioned that you're a heavy user of plugins. What are some of the go-to plug-ins that you tend to use for your acts?

Kevin Harvey: I'm always experimenting with plugins. I try 'em, because it's very quick on the S6L. You load up a SoundGrid Rack and then just pop 'em in there and see which one you like. It's very quick. We have the [Waves] Pro Show package which really works well with the S6L. There are some really good plugins in it. Plus the Avid plugins that you guys came out with are brilliant. If didn't have any Waves plug-ins, the Avid plugins would get you to the same place that a lot of the Waves plug-ins will take you. The reverbs are phenomenal.

Kevin Ruschmann: I also use a lot of the ReVibe. I haven't even touched the reverbs on the latest pack yet 'cause I like the ReVibe. 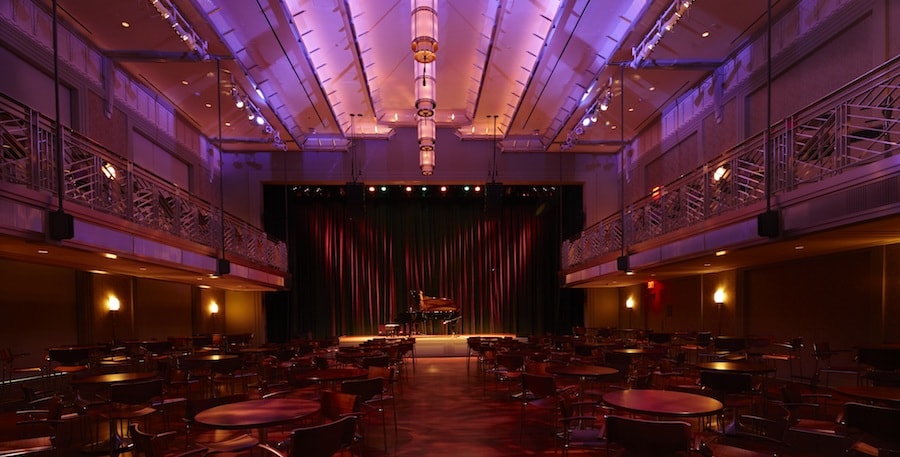 Are you using an analog split or I/O sharing over the network?

Kevin Ruschmann: I/O sharing. We have two of the S6L-32D surfaces with 144 engines on both. We have got a Stage 64 loaded with 64 inputs, 24 outputs, and an AES card, and then we have another Stage 32 with 32 outputs specifically for monitors. It has been seamless with no issues at all. I can change gains, and it won't affect him. He can change gains, and it won't affect me. It’s like I have my own independent stage box.

Kevin Harvey: Neither of us even think about it. It just works seamlessly.

Do you split who's controlling master or how do you have it set up?

Kevin Ruschmann: It depends. Usually I'm the master, and that's because when I'm recording to Pro Tools, the master controls the analog head amp gain being sent to Pro Tools. 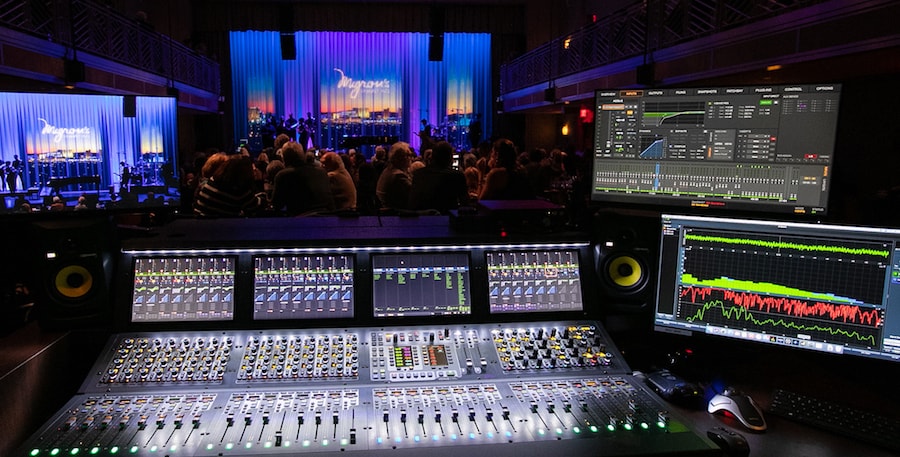 How do you use Pro Tools recording?

Kevin Ruschmann: That was one of the big qualifications when we were choosing consoles. We wanted a console that integrates well with Pro Tools, because we record a lot of the acts coming in so they can take the multitrack with them. I am recording to a Mac Pro with redundant hard drives as backup. I have also started to take the files and return them via Virtual Soundcheck so I can play with plugins and make adjustments on multiple day shows.

How has S6L’s Pro Tools recording capabilities changed versus how it was with the SC48?

Kevin Ruschmann: It's a little more seamless. I had to do a lot more work previously than I do now. Now I can just basically launch it and hit record and it'll run without having to do any modification to the track names and stuff like that. With the SC48, I was having to stem back a lot of stuff because of the minimal track count. We had one show where we had a bunch of strings, and I had to stem that down to a group and just record the group through Pro Tools. But now, I've got it set to 128, so we can record however many inputs we have on the stage plus some. 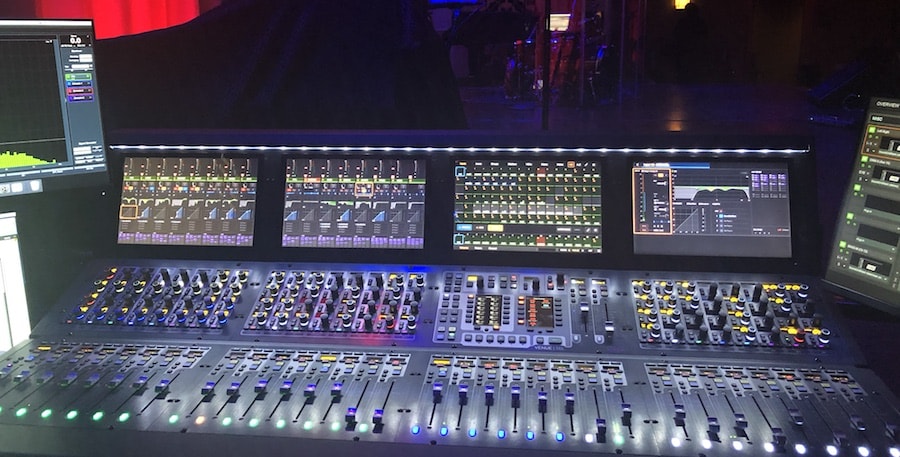 Tell me a bit more about the room itself and what kind of setup you're running?

Kevin Harvey: It's acoustically pretty neutral with sound-absorbing panels all the way around, so there's very little reflection. It's a really good room to mix in. And we just hung a new Meyer LINA system, which is their latest-generation small line array. Between the S6L on the front end going through those LINAs, it is so clear, it's almost jarring. It almost makes you jump back for a second because everything is really, really in your face. The image is really close, so you have to be a little gentle because it is a very clear system with a very good console on the front end of it. The combination of the two—I've never heard it sound this good in here. People come in and they're actually shocked when they see the quality of gear that we've got. We have great consoles now. It really is a good-sounding room. We do everything in this room from full-blown 20-piece horn bands to quiet jazz. We do thumping rock and roll and then an acoustic act the next day. I can't think of anything you couldn't do with this console.

The most important thing for me is that going to work is fun now. It's so great to not be limited on anything. Wherever my imagination takes me audio-wise, I've got the console to produce it on now. It's really limitless. I started mixing professionally fulltime in 1974, and if someone had tried to tell me even in the '90s that this type of technology was going to be available, I wouldn't have believed them.