Empower students with the skills needed to make an immediate impact in their chosen profession.

The spectacular Aoraki/Mount Cook in Canterbury, New Zealand, stands at 3,754 meters and is the country’s highest mountain. Aoraki is MÄori for Cloud Piercer and it would seem this extraordinary name resonates beautifully with the “sky’s the limit” thinking surrounding students of the New Zealand Broadcasting School, Ara Institute of Canterbury. The New Zealand Broadcasting School (NZBS), an Avid Learning Partner, is the premier national provider of applied education in screen, journalism, radio and digital media. With an enviable reputation built on its 95% graduate employment rate, NZBS is routinely oversubscribed with domestic applications for its Bachelor of Broadcasting Communications degree courses, accepting only a few very fortunate international students.

The two and a half year accelerated degree runs three separate specializations; in Broadcast Journalism, Radio Broadcasting and Screen & Television Production with a maximum of twenty-five students per track. The school has as many as 140 students on campus at any given time across first and second years, and more than 200  students enrolled across all the courses. NZBS is exceptional for its unique, 6-month paid internship, which is fully integrated into the program and held off-campus with approved media industry employers.

One of the primary reasons we are almost completely Avid now is because that is exactly what our industry has been telling us we should be doing.

“Our philosophy with our degree program has always been industry integration and collaboration,” says Tony Simons, Manager of the NZBS for over 15 years. “It’s very much an industry-led program and our future and success depends on our ability to place all of our students in 6-month, paid internships. Every year we place up to 65 students into internships across the three disciplines. In fact, we deliberately restrict student numbers due to the integral nature of the internship program.”

Renowned for its strong synergy with the New Zealand film and television industry, the school works very closely with three industry advisory committees who provide solid guidance in terms of what it should be doing. “One of the primary reasons we are almost completely Avid now is because that is exactly what our industry has been telling us we should be doing,” explains Simons. “We aim to be as well-equipped as possible so we can prepare our students as best as we can, so when the students go into their internships, they’re industry-ready.”

The students have access to 30 workstations running Media Composer | Ultimate and an editing lab with 16 computers for initial cutting. For fine cut they can book out one of six edit suites and, once the cut is locked off, color grading is done on DaVinci Resolve, working with a 4K monitor, connected to Avid NEXIS shared storage. The school also works with Pro Tools connected to NEXIS storage, allowing simultaneous audio post-production and color grading. 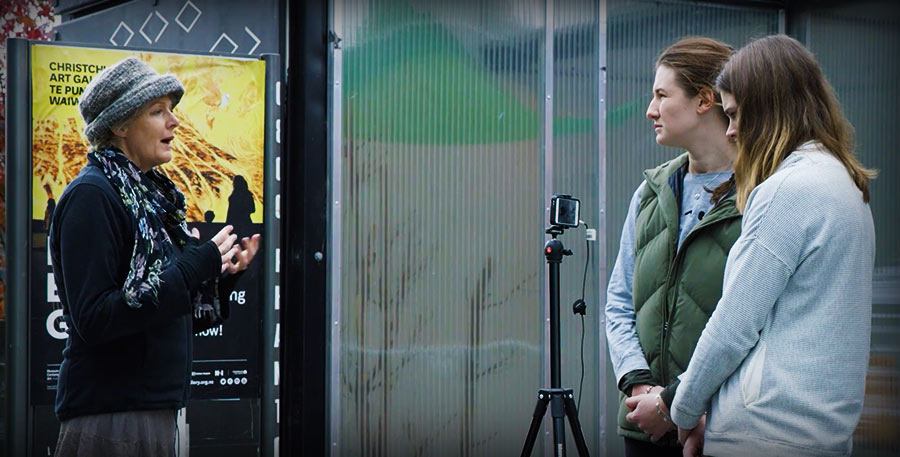 Students of the Journalism track create their own website content for their site https://metronews.co.nz/ and must run a five-night-a-week news service for two weeks, which is where their knowledge of Media Composer is applied in a practical application.

Technical Supervisor, Paul Newell, brings 30 years of industry experience to the NZBS along with the awareness that real-world environments are exclusively using Media Composer and Pro Tools. “I was quite adamant that for the students to become as skilled and as marketable as we could possibly have them, Avid was the essential component in their core skills that would help them market themselves beyond the school,” asserts Newell.

“The two major news services in New Zealand, MediaWorks Newshub and TV1 News, are Avid platform news services. They also run NEXIS storage systems, so the students can basically walk in, sit down and hook into the NEXIS. They know where to put their footage and can get straight into an edit so that proves very successful.”

The internationally recognized New Zealand film industry has attracted the likes of Academy Award-winning Director, James Cameron to the region who keeps company with local industry juggernaut, Academy Award-winning Director, Peter Jackson. This expands upon the outstanding talent that populates “Wellywood” as the film industry in the New Zealand capital, Wellington, is affectionately known. Home to WingNut Films, Park Road Post and Weta Digital the talent and achievements are extraordinary when measured on a global scale.

Every year we place up to 65 students into internships.

“Avid is like mastering kung fu,” notes Richard Hansen, Screen Production Course Leader at NZBS. “You need to break through a barrier before you feel confident but once you do, the gates of opportunity open up. There’ve been a number of students who’ve moved into careers in post-production not only with Media Composer but in audio post with Pro Tools as well. We have one student who hasn’t even graduated yet, she’s just finishing her internship.  But she will continue to work, on contract, on Avatar as an assistant editor in the edit suite next to James Cameron.”

Although internships are primarily based in New Zealand, a significant number of graduates head overseas upon completion of their degree to work in Australia, Asia, Europe and the U.K.

Senior students are already working with Media Composer 2019.  When NZBS’ new school year begins in February 2020, first-year students will be introduced to the new Media Composer user interface ensuring they stay well aligned with the industry standard. The school also recognizes the value of remote access and is in the early stages of piloting and integrating Avid MediaCentral to allow students to benefit from cloud collaboration and to take them into the next generation of broadcasting.