Nordisk Film TV Prepares for the Future of Production

Based in Copenhagen, with offices in Stockholm, Oslo and Helsinki, Nordisk Film TV is one of the Nordic region’s leading entertainment television specialists. Each year the company develops and produces more than 1,500 hours of premium content for major broadcasters in its home region, as well as around the world through the Banijay Entertainment Network. Underlying its global reach, the company also has partnership and distribution agreements with DreamWorks Studios and Lionsgate Entertainment.

The content produced by Nordisk Film TV includes drama, comedy, games shows and reality TV, but it was another of its areas of output—news and current affairs—that prompted the recent acquisition of a substantial number of new Avid MediaCentral licenses at its Copenhagen HQ. The new investment, which also includes Interplay | Production and Media Composer | Cloud Remote capabilities, has enhanced an existing inventory that includes 5 x 64TB Avid shared storage solutions.

Charlotte Borg, Head of Structure and Workflow at Nordisk Film TV, explains the impetus to take action: “We were facing a challenge from broadcasters to optimize our workflows and utilize our staff more effectively than we had been doing. In some ways we had been continuing to work as we would have done ten years ago, with journalists, camera crews and editors all rather separate in the way they produced material. It had become clear that this was not going to be a sustainable method of operation in the future. Instead, we had to identify one system where everyone could access files, and which would allow us much more flexibility all the way along the production chain.”

One of the primary objectives of the production review was to enable journalists to see a story through from filming to final editing and delivery. “It was important to us that journalists be able to take the material from the truck, ingest it and edit it themselves,” says Borg. “By doing this we would be able to send the camera crews out again more rapidly and free up editing staff for other work.”

Having recognised that a substantial adaptation of its existing production workflow was required, Nordisk Film TV spent time analyzing the various options. “It became apparent that Avid MediaCentral was the only platform that could give the team the necessary level of flexibility. It is also very user-friendly, which is vital as we have different types of employee with varying levels of technical expertise,” explains Borg.

We had to identify one system… which would allow us much more flexibility all the way along the production chain.

The foundation of numerous news production workflows worldwide, the MediaCentral platform was devised specifically to boost efficiency and enable remote collaboration, making it possible to access projects and media everywhere. Offering a unified experience for media production, MediaCentral also delivers a cloud-based front-end—MediaCentral | UX—that has been optimised for ease of operation by all users. 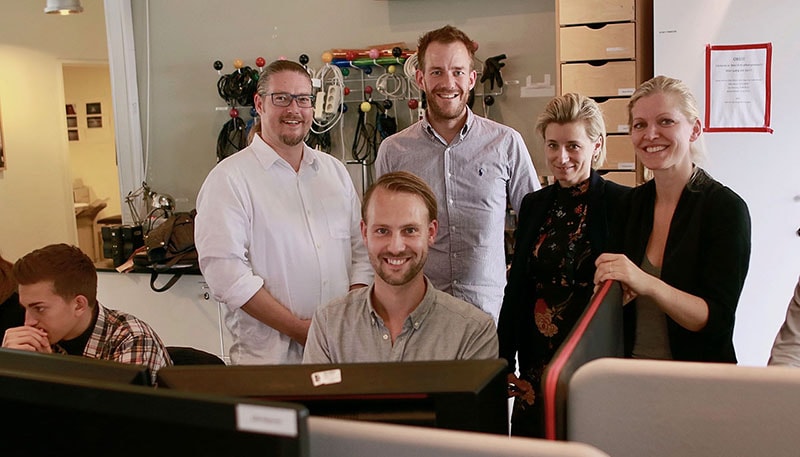 The new configuration has also opened the way to a more flexible approach to producing and delivering reports from both studio and field environments. “Opting for MediaCentral | UX has allowed us to reduce the number of dedicated workstations as well as giving us a mobile infrastructure that makes it possible for journalists to work on material out in the field,” she says. “The compatibility with other systems also provides a considerable freedom both in terms of current and future requirements. I would also highlight the transparency of the system, which is delivering a real boost to supervisors and technical maintenance personnel.”

The Media Composer | Cloud Remote element is an important enabler here in that it allows editors, reports and videographers to ingest, edit and move media fluidly between a story site and the relevant Interplay | Production workgroup. “Our whole team has been able to get to grips with this part of the solution very quickly,” says Borg.

Although the installation—which was undertaken by Avid partner In-Site A/S, who also sold the system to Nordisk Film TV—was carried out only a few months ago, Borg says that the news team has already discerned a noticeable improvement: “The ability for journalists to see stories through from collection to completion has meant that they are able to plan their days much more efficiently. They no longer have to wait for a technician or editor to prepare media for them – they can just go ahead and sort it for themselves.

“In the long-term I think this will mean that we will be able to cover more stories and events, which is obviously advantageous for us as a news organisation! We are already noticing that our camera crews and editing staff have greater spare capacity—something that has been remarked upon by a number of our broadcasting clients.”

With Avid MediaCentral as the foundation of workflow, we are now set up to work more flexibly and efficiently than ever before.

Due to increased efficiency there has already been “a slight reduction” in the total workforce. Looking ahead, Borg anticipates making more of the ability to work remotely—“we want to explore more deeply ways in which journalists can use MediaCentral | UX to edit from home or when they are out on assignment”—and fully expects the new infrastructure to help the company win additional contracts in news and current affairs.

“News cycles are becoming increasingly intensive, while broadcasters have to service more platforms and outlets than ever before,” she concludes. “This means that there is no capacity for latency in the production cycle. With Avid MediaCentral as the foundation of workflow, we are now set up to work more flexibly and efficiently than ever before. Our clients are already noticing the difference, so we are delighted by our investment and the fact that it means we are able to both service the workflows of today—and be ready to accommodate the requirements of tomorrow.”