The need to sketch out melodies and orchestrations, and preview how an ensemble will sound when composing a new piece of music.

Sibelius offers dynamic playback tools that allow composers to create music, test ideas, and hear how a piece will sound when making decisions.

Oliver Caplan writes music with a purpose. The award-winning American composer has been commissioned by the Atlanta Chamber Players, the Brookline Symphony Orchestra, the Columbia University Wind Ensemble, the Indiana Wind Symphony, and a long list of other ensembles, for his soaring melodies and lush orchestrations that evoke hope and inspire a sense of community. Caplan's works have been performed in over 125 performances nationwide.

His discography includes beautiful works such as "Love Letters", written to celebrate his marriage and recognize progress in marriage equality. "To The Sea" is dedicated to the spirit of environmentalism and urban renewal through the repurposing of railway corridors to link communities and encourage recreation. Mr. Caplan is a finalist for the American Prize in Vocal Chamber Music Composition, for "Connect All. We All Connect."—A piece that reflects on the strength and resiliency of human connection. These works are part of his recent album, You are Not Alone. The title piece honors victims and survivors of breast cancer. 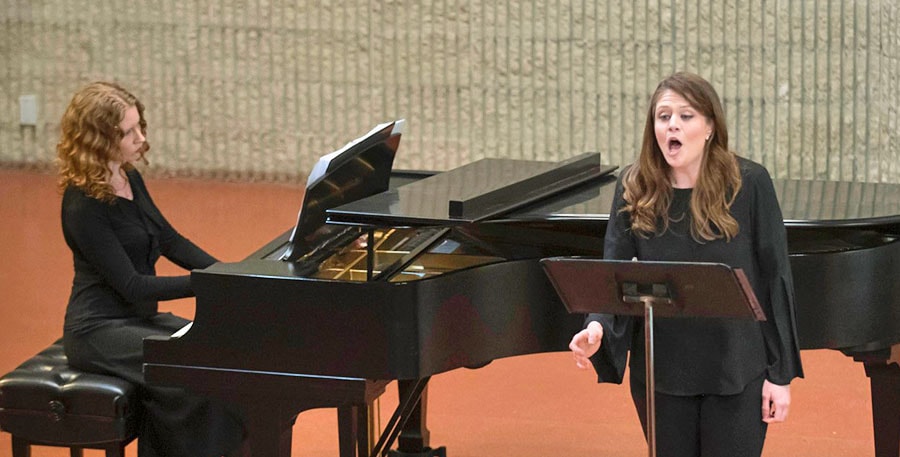 His recent work, Boston Strong, was premiered by Juventas New Music Ensemble on April 14 in their concert "Five Years Later: Songs of Hope & Resilience." The concert commemorated the fifth anniversary of the 2013 Boston marathon bombing, and was also Oliver's debut as Artistic Director of the organization.

I talked with Caplan about his composition process using Sibelius, and you would not be surprised to learn that his creation process is complex, often involving exploration of different themes and melodies, and sketching different ideas before committing them to software.
At first, I work at the piano, crafting a bare bones sketch with pencil and paper. Typically, I start by spinning melodies and following them down the rabbit hole. 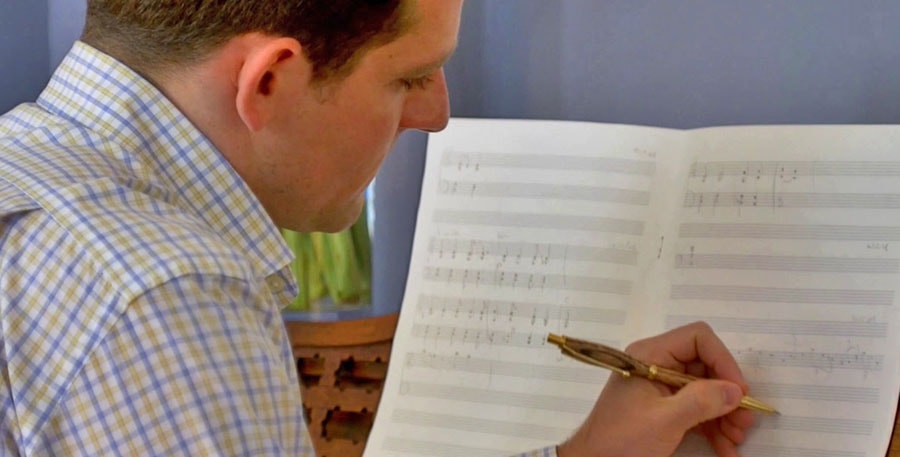 Caplan says the process of pencil and paper helps to get an idea of how the piece will be built, which is a primary factor in determining how it will sound. It acts as an intermediate step between the raw vision and a structured composition. "Through this process, I envision the work's architecture, outlining melody, harmony and form," Caplan says. "Once I have this vision set, I orchestrate each passage, thinking about color and texture. How can I deploy the instruments at hand to realize the desired effect?"

When a piece is ready for transfer to Sibelius, Caplan uses the dynamic playback features of Sibelius to test compositions.

Sibelius's playback features are a formative tool for hearing all the lines of a piece simultaneously. An orchestra can perform more than my own ten fingers can play at once.

Caplan describes how using Sibelius as a performance tool puts him in the mind of the listener, and can help guide the finished work. "It allows me to stand back and pretend I'm in the audience. While I've always dreamed of a pocket orchestra that lives in my desk drawer, Sibelius is the next best thing."

When you listen to Caplan's music, there is an indisputable 'newness' to it, a confident originality that builds upon traditional American symphonic styles. I asked Caplan where he gets his inspiration from, and what composers influence him. "I write what's in my heart and try not to be too self-conscious about influence or style. That said, my favorite composers include Vaughan Williams, Copland and Ravel, amongst others."

As to the process of sketching out a piece of music to a complete score, the time needed to go from a vision to a performance on stage or recording an album can vary greatly. "There's usually a 'research phase' in which I immerse myself in the topical inspiration, if there is one. I listen to the commissioning ensemble, begin a sketching phase, then an orchestration phase and an editing phase." 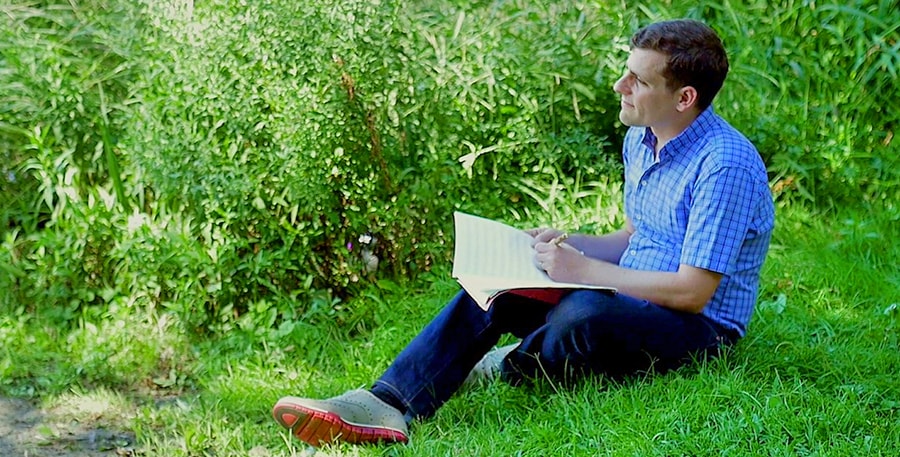 Mr. Caplan talked about his newest piece, entitled We Exist, written for chorus and string orchestra. This piece is a reaction to the 2017 violence in Charlottesville, Virginia.

The open displays of xenophobia, racism, sexism and homophobia—and the tepid response from the highest level of government—shook me to my core.

Caplan was moved to go beyond creating a new work, establishing an artistic community to respond to the violent events. "I wanted to say more through my music and reached out to other artists who were feeling the same way to see what we might do together."

Mr. Caplan expresses extreme gratitude to the New Hampshire Master Chorale, led by Music Director Dan Perkins, who commissioned this work. He also connected with Naseem Rakha, author of The Crying Tree, whose powerful text for the piece infused it with a message of grace and strength.

"We Exist responds to hatred with a call to action. Each of us carries the responsibility to open our hearts and speak against affronts to freedom. This piece celebrates the strength of diversity and honors all races, faiths and genders."

The New Hampshire Master Chorale will premiere We Exist at their concerts on June 23 & 24, 2018. Like the rest of Caplan's work, it offers a voice of hope in an uncertain world.