Edit a complex CGI-filled timeline for the silver-screen return of one of the most famous fictional children’s characters.

Since he was found by the Brown family in London’s Paddington station in 1958, Paddington Bear and his whimsical adventures have entertained generations. His polite nature, old hat, duffle coat and love of orange marmalade have become iconic around the world. So when it comes to bringing one of the most loved characters in British literature to life on the big screen—the pressure is on.

After tackling Paddington’s first, and hugely successful cinema debut in 2014, BAFTA award-winning director, Paul King, lead animator, Pablo Grillo, and editor, Mark Everson, returned to help bring the beloved bear back for a live-action/CGI-animated sequel. In Paddington 2, our furry friend is happily settled with the Brown family, until a perfect present he’s eyeing for his Aunt Lucy’s 100th birthday is stolen. Declared the “best-reviewed film” ever by review aggregator Rotten Tomatoes, the second cinematic installment has delighted audiences everywhere. 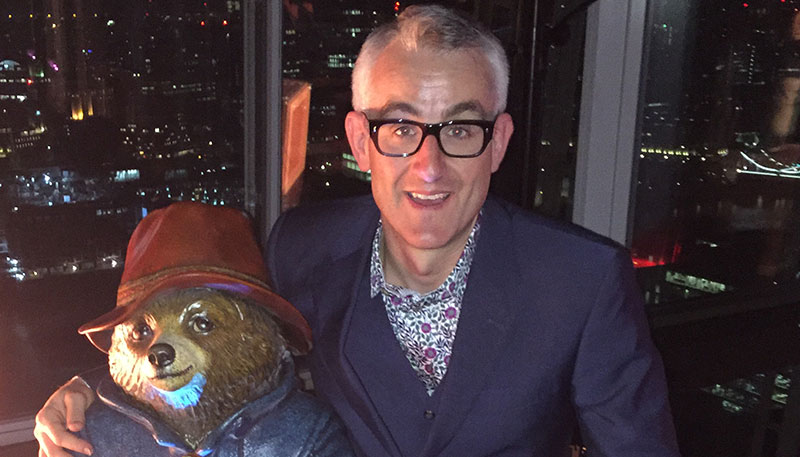 From the professional clowns who helped animators bring the bear’s expressions alive, to the 75 years’ worth of animator hours it took to do the visual effects, Paddington 2’s creative team went to great lengths to bring author Michael Bond’s adored character to life for a comedic yet heartfelt adventure.

For the past 20 years, London-based editor Mark Everson has embraced Media Composer, the most widely used video editing software in the industry. Powered by MediaCentral, the powerful software has helped Mark cut some of the most memorable British comedies—from The Mighty Boosh to the nation’s favorite local DJ, Alan Partridge. A long-standing relationship with director Paul King meant the chance to bring another big character to life, although this one had a little more fur. This time, editor Jon Amos, whose recent credits include Baby Driver, Grimsby, and A United Kingdom, joined Mark to help tell Paddington’s next adventure.

The CGI bear brought many challenges to the first film, including visual effects demands. But Mark persevered with patience and the support of the right tools. Although he was used to human lead characters, many of the comedies he’s worked on have included VFX. His experience combining CGI and comedy—cutting to get audiences laughing—helped him throughout the editing journey on Paddington 2 but with complex production requirements and a leading character that wasn’t flesh and bone, it wasn’t going to be easy.

“We learned an incredible amount from working on the first film,” he says. “One main lesson we put into action this time around was to get a VFX editor involved much earlier in the editing process. Both Paddington movies have been really hard work, and until Paddington Bear really starts to exist, you’re faced with a lot of question marks over what he’s doing minute to minute.”

According to Mark, there was no simple day when working with Media Composer on Paddington; it was all focused on the different stages that evolved across the year-long project. A highly-collaborative editing environment saw Mark and Jon, lead animator Pablo Grillo, and the animation team at Framestore work closely together to ensure deadlines were met and the animation complimented the storyline, and vice versa. “Editing Paddington is like a train that’s going along and you’re laying a track as you go, but you’re not quite sure where you’re going so you might lay the track in the wrong direction.”

The Paddington 2 editing process began like many others, by assembling the rushes on location. Although there was one key difference: the lead character was invisible and someone off-camera read out his lines. From there, Henry Kemplen, the VFX editor, populated the shot with an unrealistic 2D bear that drifted around not moving his mouth. He worked alongside VFX supervisor, Robin Saxon, who estimated the cost and how many bear shots a scene would contain even before the scene was shot. With a scarily good eye for detail, Robin was the link between production and Framestore.

The film’s process demanded an in-the-moment approach. “What’s particularly unusual is that by the end of the shoot, we were already handing content over to the animators at Framestore, our visual effects studio,” says Mark. “Normally, the process is more holistic—you’re smoothing over the storytelling as you edit. With over 523 shots in the film hand-crafted by the Framestore team, each scene needed to be delivered as quickly as possible. This created a much more macro approach—you’re cutting a scene the way you want it to be in that moment, without knowing the completed film structure.”

With a fast, rolling turnover schedule from day one, footage was continuously edited scene-by-scene during and after filming. The process saw mismatched animation sequences with various evolutionary states of the bear animation frequently exchanged between Mark, Jon, and Framestore. “Physical comedy doesn’t get funny until quite late in the process, so it can be a hard watch. We edited scene-by-scene, on-the-spot, and without the star of the movie. Inevitably the cut will constantly change as the performance and movie evolve. The whole movie was constantly shifting.” 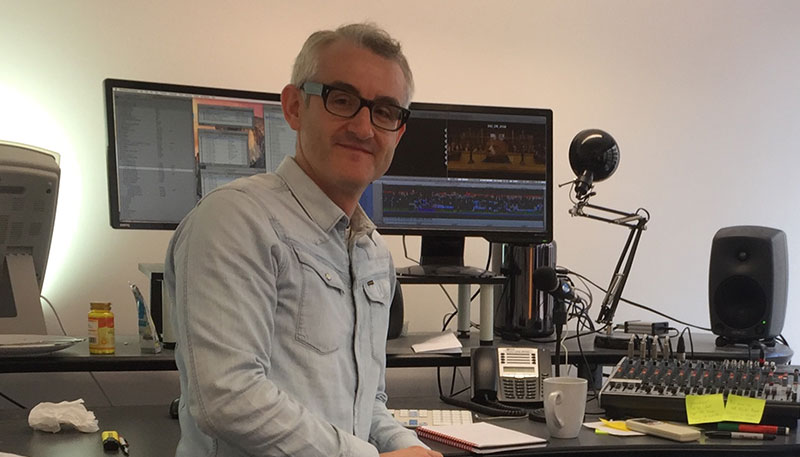 Media Composer provided the flexibility they needed. Moving from a 2D floating guide bear to a fully animated bear completely changed the sequence and led to more re-cutting. Constant animation development required scenes to be edited at various stages over the course of months. “Editing is all about finding the right rhythm. When you go to a VFX review with Pablo, you’ll still be commenting on the shape of the performance,” he explains. “Unlike most films, editorially you have more opportunities to give your suggestions on jokes and lines, which might make it into the end product.”

Still suggesting lines at this stage also meant that actor Ben Wishaw’s voiceover, as Paddington, couldn’t be recorded until later in the process. The editing team worked with a guide’s voice for a long time until they were certain which scenes were going to make it into the final cut. 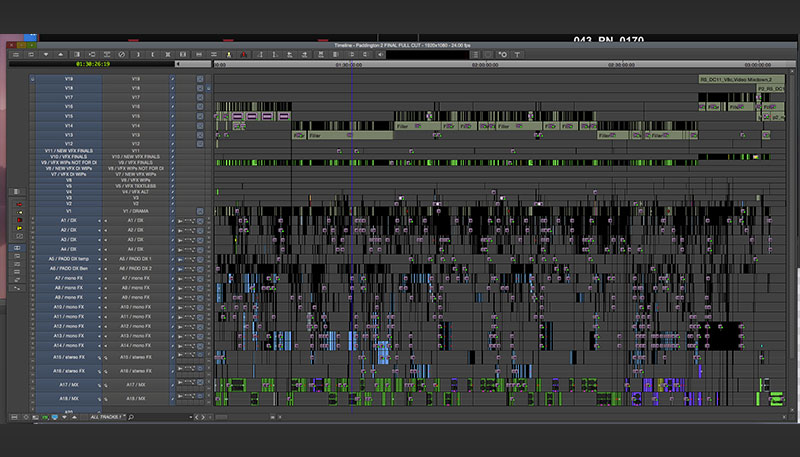 The length of a scene was another major consideration—and it was a guessing game from the beginning, especially with the absence of the main character. Once the first round of animations was delivered, Mark revised his guesses to see what worked and what didn’t. “One shot may work better if it’s half as long, or the exact opposite,” adds Mark. “When there’s hundreds of animators relying on you, you’re under pressure to make the right editorial decisions fast.”

Mark is no stranger to Media Composer, first using the industry-leading software in his role as an assistant editor in 1998. Having relied on it for the first Paddington film, he knew it was the only option for the sequel. “The timeline on a Paddington movie is colossal and Media Composer handled that with ease. With over 20 layers of audio and a similar amount of video, it’s easy to take for granted how complicated that can be. Avid not only supported the entire operation but enabled us to have playback in a high resolution.”

Mark has worked with Paul since 2006, so the pair has spent plenty of time together developing a style of work. “As a director, Paul is really technically aware,” he says. “He knows what Media Composer can do, which allows us to discuss using even the most minuscule of effects. Even if you see a shot where there’s no editing, it’s highly likely that we put a tiny speed ramp in just to reduce the beat between one line and the next. Every sequence had months of work on it, and Media Composer allowed us to get the continuity as precise as possible.”

Paul, Mark, and Pablo worked closely together, reviewing the edit on Media Composer. Their similar comic style means they agree when the rhythm’s not right. Having spent hundreds of hours together in edit suites, they’ve developed their own editing processes. “Every single frame matters and we spend our time in the edit, tightening and loosening to achieve perfect rhythm, without making the film any longer than it needs to be.”

Physicality without the physical

Physical comedy is an art that can take a long time to develop. So how is it finessed when a lead character doesn’t exist? Take the incredible double act of Paddington and Knuckles McGinty, played by Brendan Gleeson. “The comic rhythm in the performance between the two of them makes you forget that there was only one actor present during filming,” says Mark. “They bounce off each other in a brilliant way, yet it’s entirely constructed.”

To achieve this natural affinity, the first cut was done without Ben’s voice, with the dialogue instead written to fit Brendan. Acclaimed physical theatre performer, Javier Marzan, and theatre and comedy director, Cal McCrystal, were on hand to film ideas for each scene. This helped to bring Paddington alive, as their expressions were used by the VFX team to feed into what the bear’s expressions would be at certain moments, and how these could bring comedy to a scene. As the voice behind Paddington, Ben Wishaw’s reactions were also filmed to help guide the VFX artists to create the most human-bear possible. 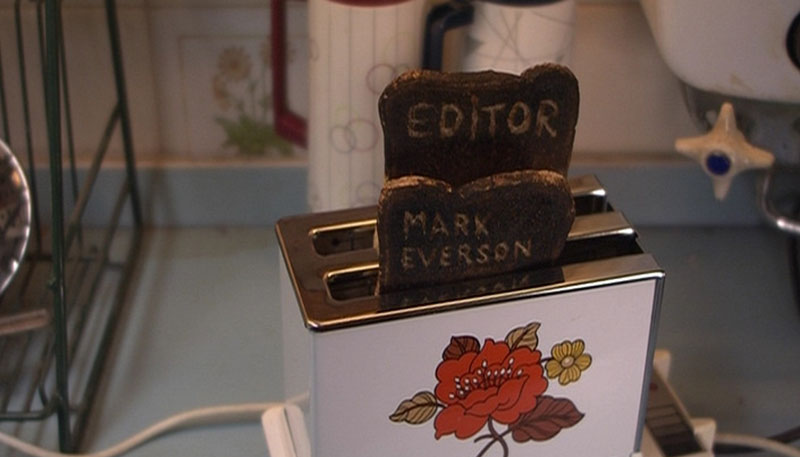 “We used Media Composer to cut in a box where there’s no bear, and added Javier, Cal, and Ben into it,” Mark explains. “This helped us feed direction into the VFX review. A lot of the animators also have a mirror next to their stations so they can feed their own performances into the bear. The end result of Paddington 2 is a combination of these elements that create the memorable physical comedy.”

Both Paul and Pablo were on hand to act out Paddington’s moves. For the scene where Paddington puts a sandwich in Knuckle’s mouth, Pablo stepped into Paddington’s shoes and performed the action. “The result is impeccably slick. It shows how with the right technology you can create a seamless animation between CGI and live-action shots,” adds Mark.

Since its UK release in November, Paddington 2 has received critical acclaim across the globe, bagging three esteemed BAFTA nominations, along with five London Film Critics' Circle Award nominations. The great reviews are, of course, gratifying for Mark, who adds: “For the 12 months you’re working on a project, you’re always focusing on its weak points and how it can be improved. When it’s over, it’s great to be able to step back and see people enjoying something you put so much work into.”