With Dolby Atmos fully integrated with a Pro Tools workflow, the team can create and control both 7.1 and Dolby Atmos mixes.

Park Road Post in Wellington, New Zealand, is one of the world’s most advanced post-production facilities and longtime Avid customer. As a boutique facility, with a notable portfolio that includes The Lord of the Rings trilogy, The Adventures of Tintin, and King Kong, having the latest technology is competitively crucial to its success—and the success of its selected client projects.

When demand for the new immersive Dolby Atmos audio technology caught fire across the industry, Park Road Post owner Peter Jackson knew they had to have it. However, Park Road Post didn’t want to change their current Pro Tools workflows or add any complexity that would severely impact their production schedules. So the Dolby Atmos development team partnered with Avid to find a way to integrate the new technology into the same workflow and ensure that everything operated seamlessly. 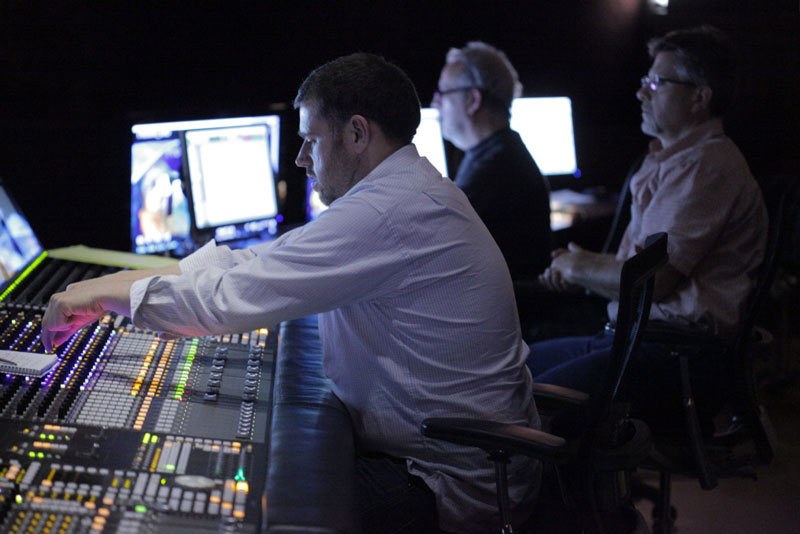 To ensure seamless interoperability and the ability to control up to 128 simultaneous audio objects inside Pro Tools, they centered the workflow around Pro Tools | HDX by way of a Dolby Atmos Panner AAX plugin and outboard Rendering and Mastering Unit. This provided the highest-possible performance, and efficiency, without changing the workflow.

Integration of the Dolby RMU and the Atmos plugin with Avidâs EUCON was very powerful. We couldnât be happier with how it all came together.

To capitalize on what the new technology could bring to The Hobbit, the Park Road Post team moved swiftly, dedicating two dubbing stages to take on the massive production. The team upgraded each stage with new Pro Tools | HDX systems and Dolby Atmos, with matching System 5 consoles to help them mix demanding sessions of this magnitude faster and easier.

“We started our work on the first stage where we did a more conventional 7.1 mix, as well as pre-mixing of dialogue and FX,” explains Michael Hedges, re-recording mixer on The Hobbit. “Once we had a good four reels ‘in the can,’ we then sent the mixes to the second stage where the Dolby Atmos mix was completed.”

The dual room solution was ultimately a huge success. Hedges, along with fellow re-recording mixer Gilbert Lake, is quick to credit the compatibility between the Avid and Dolby technologies for helping them meet some incredibly steep production demands.

“The fact that our initial 7.1 mix played exactly the same in both rooms and acted as the starting point for the Dolby Atmos version was a huge benefit for Gilbert and me,” Hedges elaborates. “Gilbert worked on the second stage and was able to easily verify the automation against the stems I sent. As such, when Peter [Jackson] sat in the room for the Dolby Atmos mix, he knew that what he was starting with was exactly what he just signed off on.”

This workflow was really powerful," said Lake, "because we weren't mixing with just ‘vanilla’ stems—we were starting with extremely high-quality 7.1 source elements and automation. All we had to do was play with the fidelity and move stuff around more boldly. This is where the full-range surrounds, available through the Dolby Atmos system, allow you to be a lot more confident and creative.”

At the end of the day, the primary mission of any new technology is to expand creativity while not hindering the very same processes it is attempting to improve. For this, the Park Road team gives Avid and Dolby high marks.

“The System 5 desks were really solid, and the integration of the Dolby RMU and the Atmos plugin with Avid’s EUCON was very powerful,” concludes Lake. “We couldn’t be happier with how it all came together.”