Editor Paul Machliss, ACE needed to quickly review each shot during production to ensure the visuals were precisely synced with the soundtrack.

Using Media Composer on a laptop, Paul could view takes instantly on the set, speeding up his entire editing workflow.

Go behind the scenes of Baby Driver with editor Paul Machliss, ACE

Editor Paul Machliss, ACE is one of the most exciting editors in the world, and his latest film Baby Driver might be his most impressive work yet. The blockbuster film marks another successful collaboration between Machliss and director Edgar Wright, after the pair found international success with Scott Pilgrim vs the World and The World’s End.

The film follows Baby—a young getaway driver who constantly listens to music to combat tinnitus, and heighten his focus. Baby’s personal soundtrack plays a huge role in the film, and the music is incorporated into the action in unique and innovative ways.

“Even though I wouldn’t say it’s a musical, it is a film full of music and the integration is quite unique,” said Machliss. “We knew it was going to be a big deal to make the visuals and images work with the music. At the same time, we didn’t want it to feel like a musical where everything is heavily choreographed. When someone puts a bottle down on the chair, it may happen to be on the beat, but we didn’t want you to think we were waiting for that moment. But if you watched the film again, you could see how everything clicks and works together.”

Machliss needed to overcome some daunting logistical challenges during production. Wright essentially built the film around a playlist of songs, and the shots needed to be timed to the length of each track for everything to be in sync. They decided the only way to achieve their goal was for Machliss to be on set for every shot, so he could review the takes in real time.

That was probably the hardest job that I’ve ever worked as an editor, but it’s always exciting to do a job that challenges you and pushes you forward. 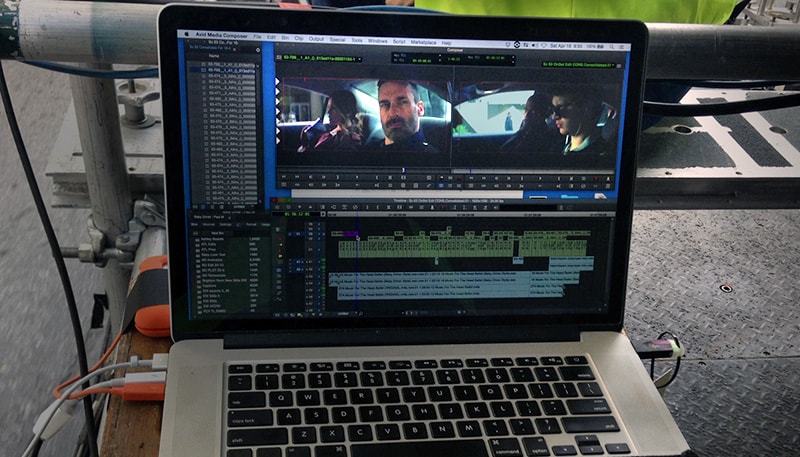 Using an edit cart from the sound department, Machliss created a makeshift mobile editing bay consisting of a laptop running Media Composer | Ultimate (formerly Media Composer) and an external monitor. Machliss then used storyboards of the dialogue and music scenes, running on a lower video layer of Media Composer, to ensure that each shot matched up to the music and didn’t run too long. The review process was so important, they even strapped his editing station to the back of a moving box truck so Machliss could approve takes for the film’s car chase scenes.

“In order to make it work, I had to be there at the moment of creation,” explained Machliss. “I was there every day, at the moment of every take—we had to make sure we got it right. At that moment, the art of post production actually becomes intertwined with the moment of production—making the cut was just as important as making the take work. That was probably the hardest job that I’ve ever worked on as an editor, but it’s always exciting to do a job that challenges you and pushes you forward.”

Machliss relied on Media Composer to drastically accelerate his editing workflow while he was on location. In the past, he used Video Assist systems that generated massive AVI files, causing his computer to lag and interrupting his workflow.

With much of the production schedule dependent on his shot reviews, Machliss knew he needed a more efficient workflow. He set up a network via an Ethernet cable with the Video Assist system, and viewed the MOV files on his laptop.

“As soon as they stopped recording, I could see the clip and immediately drag it in. On a film like this where there’s pressure to get so many setups done per day, it’s even more important that the system allows you to get instant access. I really couldn’t have cut the film in this way if I didn’t have immediate access to the material.”

Academy Awards and Oscar are registered trademarks and service marks of the Academy of Motion Picture Arts and Sciences.