Post-production studios need the flexibility to support numerous types of projects ranging from feature films to episodic scripted television and reality programs, as well as streamlined integration to adapt to space constraints and complex schedules.

Pro Tools | MTRX provides post-production studios with a platform that can handle multiple digital audio networking protocols, a high-quality audio conversion engine, provide the flexibility and adaptability for changing studio layouts, and enable engineers to do their best work.

Phillip Fuller is dealing with reality. As Chief of Audio for Postworks New York, he supports the largest independently-owned post-production facility in the US. On the picture side is the firm called Technicolor Postworks, which provides a full array of editorial, color-grading and mastering services for feature films and episodic television series. For audio post-production and system rental, the side of the business known as Postworks serves projects ranging from feature films to episodic dramas and non-scripted television, including reality shows about cooking, true crime, and house-flipping.

That’s not the kind of reality Fuller is focused on, however—he is dealing with the reality of New York City’s real estate market, which requires a flexible solution to adapt to new spaces that are spread impressively across a campus of four buildings in Manhattan’s West Village.

Phillip talked with Avid about the challenges facing a busy production studio in several locations across a city where real-estate prices can double during the term of the lease.

Currently, we have four buildings located here in NYC. I have a total of twelve studios right now. Three of those are Dolby ATMOS capable. All of them are Pro Tools-based, totaling 31 Pro Tools systems in house at this moment.

For managing the studios across several locations, the capability to be knowledgeable and strategic about real estate is both a clever way to provide adaptable solutions for different projects and studio configurations, while also delivering a competitive advantage. A need to provide multiple functions for the same space and quickly adapt to changes in the schedule drives decisions about technology. Fuller describes the need to design a network-based solution that is easy to reconfigure and manage. “It’s a complex workflow. What is the best way to streamline what I’m doing? How do we get signals to and from the core machine rooms, especially when we’re building in a space that we may only be in for five to ten years?” 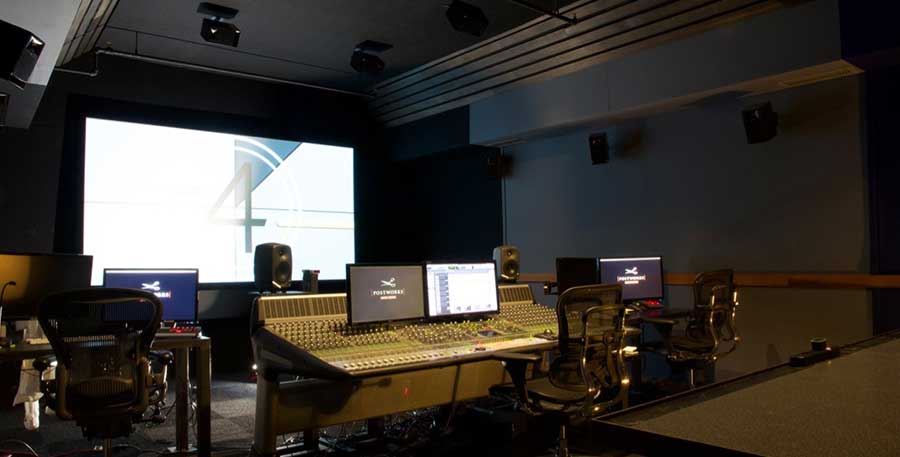 Postworks also pursues a highly flexible business model, to adapt not only to real estate pressures, but also the needs of producers in a rapidly-shifting marketplace for film and television entertainment. “We outfit not only our own mixing studios, we also lease edit and production space to clients using Pro Tools and Media Composer-based systems. These rooms could be let by the day, or week, or month, with finishing facilities for audio & video.” The pace of production has driven the need to build for maximum versatility. “We’ve expanded and moved the facility at pretty regular intervals over the past 13 years.”

Hopefully, people will come to us for their whole package and move their whole production into one of our buildings. We will help them the entire way, they’ll use all of our services, both for picture and sound.

Postworks offers these services to a wide range of organizations and multiple types of projects. “We work with everyone. Sometimes we have the whole production company, or we’ll have the picture editors here, but they’re doing the audio mix with another studio in town. Also sometimes the opposite”

Pro Tools | MTRX is front-and-center in many of the projects, because it can handle the varied needs of every production. “We just finished a Netflix series called Maniac on the stage that has the MTRX. It’s our newest audio studio. We acquired an existing facility with a large mix stage, completely refurbished it and installed the MTRX there last summer.”

Phillip lists several recent projects that were served by Postworks. “We mixed The Looming Tower for Hulu and spy drama Berlin Station for Epix.  And going back further, the same team did The Get Down, a music series for Netflix created and produced by Baz Luhrmann. All using the dual operator Avid S6 and MTRX.”

They also host a lot of reality and science and factual shows. “We lease space and equipment to a production company called Notional. They produce the Chopped series for the Food Network. They have an entire floor here using Media Composer and Avid shared storage that we setup and manage for them, and that nicely flows into finishing with one of our mixers, Paul Furedi.”

As far as the client’s concerned, serving the diverse needs of Postworks’ clientele means providing rooms they and the person mixing or editing the show feel comfortable in.

My primary worry is to make sure everything’s put together in the studios in a stable and flexible way. Allowing everyone what they need to get done in a quick & comfortable manner. And if they need something new, it’s about how quickly we can change things around. 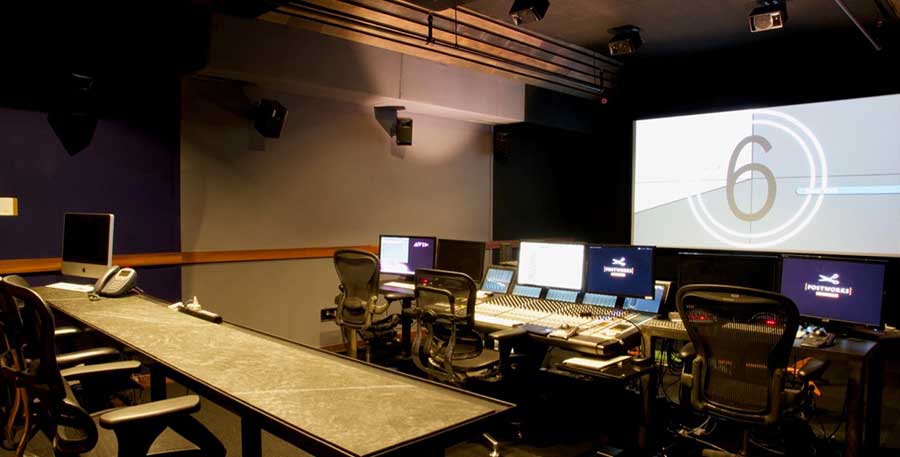 Before and after scenarios

Phillip relates the way Postworks delivered for its clients before they installed Pro Tools | MTRX, in a fast-paced physical environment where the passage of time is marked not in years, but in ‘buildings’. “Two buildings ago, I had a fairly large mix room for NYC standards. I had a Euphonix/Avid S5 console and an Avid ICON D-Control in that single mix room, with six Pro Tools machines, all MADI-based.”

After two or three years, Phillip states, Postworks left that building, and built two Dolby Atmos™ rooms in a new space. “Basically I split that room apart. The Euphonix was fine because it had the MADI back-end for audio routing, but then I had the ICON room with no routing capability.”

Here’s where Phillip faced the need for a new solution, since ICON is a control surface with no audio engine capabilities. “I needed something to take all the MADI-based Pro Tools outputs and route them around. From the VTRs of that time period, to the speakers, and between systems. I had to buy a MADI router and convert that to AES so we could do laybacks to the VTRs.”

Just in time, Dante audio-over-IP was becoming widely available as a solution for routing audio, which made for a more flexible solution than running analog cables through a new studio. Phillip continues, “One building I’m in now spans two floors, with the machines being on one floor and the studios on the other. I did not want to pull a ton of analog or AES cables between the two floors, so I quickly adopted Dante networkable audio. That is how with a single run of CAT6 I got almost infinite routing between the floors.”

This arrangement helped Phillip re-use all of Postworks’ Pro Tools gear, but he still needed something to support all the MADI routing and convert audio in the new room. “Even with all the great Dante interfaces that are out there, and especially control surfaces like an S6 or an S3 or an ICON, you not only need the converters but you also need some way to control the volume in the room or listen to the different sources in the room easily.” 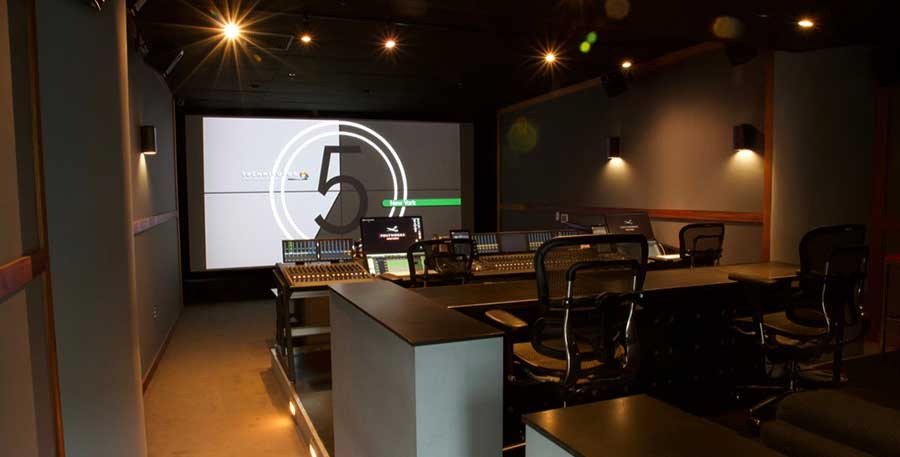 “As soon as I saw the full specs on a MTRX,” Phillip says, “I knew it was the solution. There was finally a back-end Pro Tools interface that could provide the routing I needed, that had MADI to support ATMOS, and even more importantly, included Dante. Now I’m able to quickly reconfigure and move projects from one room to another without having to pull cable or remove or patch around gear.”

Phillip states that in post-production, most audio is converted to 48k, 24-bit, but has high praise for the DAD-built digital audio converters in the MTRX. “Pro Tools | MTRX is like a big I/O box, like the back-end engine of the Euphonix console, letting us route digital audio to and from Pro Tools.”

Pro Tools | MTRX allows us to have a virtual monitoring matrix that’s fully customizable, controllable and stays in the digital realm. And with MOM, the app for iOS, that makes it even better for a multiple operator mix stage.

Because Postworks is an MPAA secure facility, their policies require keeping all content physically segregated from the public IP network, so Phillip keeps their digital audio signals and control signals on a completely separate network, using separate ethernet protocol layers.

In the new room, Phillip has a recording system and multiple editing stations, which are routed to Pro Tools | MTRX. This maximizes flexibility. “One brilliant thing is that the two S6 stage mix systems can share a single MTRX, so it cuts down on the number of interfaces I have to buy — we can get stuff between them no problem, and they both have full access to the digital Xmon monitoring system in the single MTRX unit.”

I’d love to get more people involved in using Dante-equipped audio interfaces like the Avid MTRX in their system design and daily use. I know it has made my life a lot easier.