Bring the unique sound of Rammstein’s studio recordings to the their live performances.

FOH engineer Olsen Involtini selected the Avid VENUE system for its ease of use, proven reliability, and seamless integration with Pro Tools.

Few German bands have created as powerful a sensation as Rammstein. Much of the buzz behind the band can be attributed to their live performances, which ignite fireworks—both literally and musically.

We spoke with FOH engineer Olsen Involtini and Thilo Goos, Manager of Black Box Music, on the eve of the band’s upcoming tour.

What influenced your decision to mix Rammstein on VENUE?

Olsen Involtini: That was my fault! (laughs) For the past few years I’ve mixed almost exclusively on VENUE. When Thilo approached me to mix the tour, VENUE was the only console I considered. For me, it’s really the best digital live console there is, and I feel very comfortable working on it.

Had you worked previously with other digital live consoles?

Olsen: Of course. The workflow is extremely important to me, and I prefer VENUE’s workflow over any other console. In fact, it was through working with VENUE that I discovered Pro Tools, and I’m now using Pro Tools | HD in the studio. For most of my colleagues it’s probably just the opposite—discovering VENUE through working with Pro Tools. 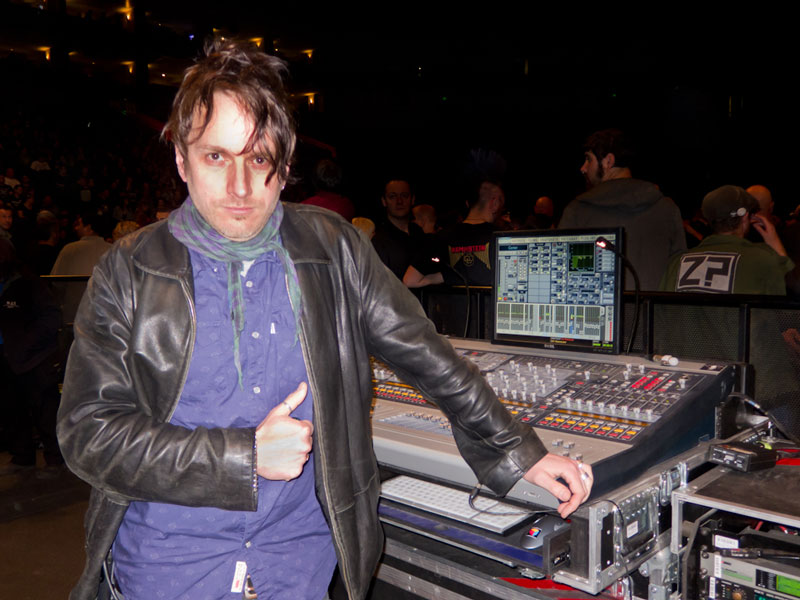 How deeply did you familiarize yourself with VENUE?

Olsen: Actually, not at all. I never even looked at the manual (laughs). But it wasn’t necessary at all. VENUE is very intuitive, and that’s the main reason I like it so much. With most other digital consoles I had to spend so much time learning the workflow, and that distracts from the actual job of mixing.

Thilo Goos: Yes. As a distributor we have to meet the demands of a wide range of tours and touring engineers, and VENUE has been one of the most-requested consoles over the past few years. That’s why we keep so many VENUE systems in stock.

For the Rammstein tour, we had to build two identical sets for logistical reasons. Of course, our console choices were limited to only those consoles with international acceptance and support. That’s an important consideration for an international tour—the availability of support and parts via distributors all over the world. For this reason, VENUE was really the only console we considered.

Why do you have two identical sets on the Rammstein tour?

Thilo: It’s a very elaborate set, and it can take one or two full days to set up and tear down. For the European leg of the tour, Rammstein is playing at different festivals and shows every two or three days, and it was necessary to maintain two identical sets in order to coordinate setup and tear down in each location. 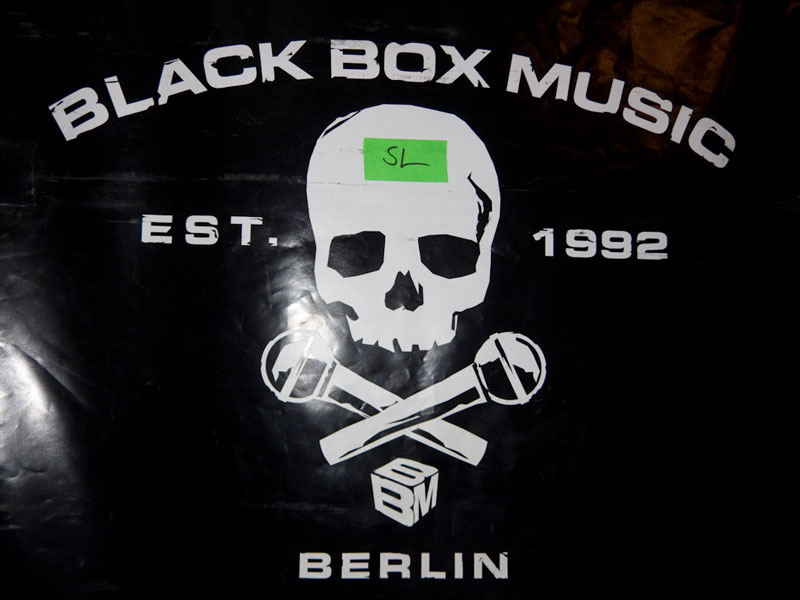 Can you describe the VENUE system you’re using for the Rammstein tour?

Olsen: We use a VENUE Profile with 48 inputs and three DSP cards. That’s the standard configuration that Black Box provides, and it more than meets our needs.

As far as plugins, I use a lot of the Waves stuff. But I also use a lot of very special analog outboard gear, like the Vertigo VSC-2 summing compressor. I have not found that particular sound in a plugin yet, so I use several inserts on the console.

I used to work exclusively in analog, but now I’ve been moving over to a lot more digital plugins, since the sound of digital has improved quite a bit in recent years. I’m not as focused on analog anymore. Jakob Hellner [Rammstein’s producer] has been raving about the new HEAT plugin for Pro Tools, and I’m eager to try it out.

Several of the members of Rammstein work with Pro Tools themselves. Did they have an influence on the decision to go with VENUE?

Olsen: Richard Kruspe [Rammstein guitarist] was very happy to hear that the decision had been made to use the VENUE, since he works with Pro Tools in the studio. He spends a lot of time working with his Pro Tools system and is very into experimenting with different sounds and plugins.

Thilo: The band members really trust the people they work with at FOH and monitors, so there were really no issues with the decision to use VENUE... We also asked if they wanted to record the shows, since it would have been very easy with VENUE’s Pro Tools integration, but they were not up for listening through so many hours of recordings after the tour, so we decided to leave it (laughs).

It’s completely different from the Sade tour, which we were taking care of at the same time as Rammstein. For that tour we provided a VENUE D-Show and an entire Pro Tools | HD system, since they were recording every show.

That’s rather unusual for a German company to handle two major world tours like that, isn’t it?

Thilo: Yes, Black Box has grown quite a bit in the last few years. We have two very large and beautiful rehearsal halls in Berlin, and our equipment roster is large enough to enable us to support two rather demanding major tours. We have more than 100 L’Acoustics K1 boxes, as well as two D-Shows, three Profiles and four SC48 systems. We also have a very good pool of employees and freelancers. 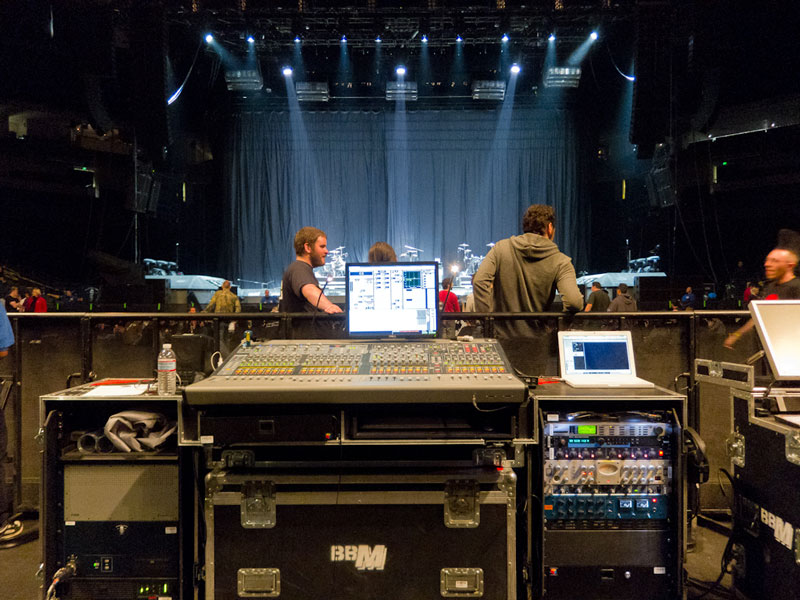 Olsen has blocked out three Profile systems (laughs)—one for Rammstein in North America, one for the tour with Lena Meyer-Landrut (the German winner of the 2010 Eurovision contest), and one for the German band Juli. So Olsen is constantly jumping from one VENUE system to the next.

Olsen: With Juli we were playing a smaller club tour, where we worked with a different PA system every day. Again, it became obvious what a blessing VENUE was. On a tour like that, you don’t always have the luxury of a perfectly tuned and optimized PA, but with VENUE you’ve got EQs and other plugins that can help you get the best out of each room. VENUE’s all-in-one integration was a tremendous help and saved a lot of time.

How does the L’Acoustics K1 system work with the VENUE console?

Olsen: With the K1, you have to familiarize yourself a bit with the sound, but once you do it’s a great system. It works particularly well for a band like Rammstein. It’s very precise, and you hear every little mistake, which is great for the way I work. But with the VENUE, you really don’t have to think as much about the PA—it always sounds super.

Olsen, what is your favorite feature on the VENUE?

Olsen: Actually my favorite thing about VENUE is that I can set it up to work just like an analog console (laughs). I work mostly with bands, not with VCAs, since I’m using a lot of summing compression. And I can have everything clearly arranged in the middle of the desk. Plugins like the ones from Waves are good too, but the VENUE’s on-board compressors and EQs sound just super and very powerful.

What do you have to pay particular attention to in a Rammstein mix?

Olsen: The most important thing is that the energy created by the band comes across to the audience, with full power and without losing its transparency. The challenge is to find the right balance between the tremendous guitar riffs and Till’s voice. I’ve always got one finger on the lead vocal fader. Even with the leakage from the guitars onstage, I’m always conscious of getting a good vocal sound.

Do the band’s pyrotechnics interfere with the mix?

Olsen: The pyrotechnics are really part of the music, so they don’t interfere at all. Most of the time they actually contribute to the power of the music.

The audience expects the same powerful guitar sounds they hear on the CDs. How do you accomplish that “wall of guitars” in a live setting?

Olsen: Both guitarists have a lot of experience when it comes to good, powerful guitar sounds, and over the years we’ve refined the best way to get that sound in a live show. Paul’s guitar goes direct, which gives it a bit more of a fast attack, while we use two large-diaphragm tube mics on Richard’s amps, which adds some different character. My job is to diffuse the massive sounds and adapt them to the room.

Do you ever have technical problems?

Olsen: There’s never been anything that would jeopardize the show. We’ve had a few minor mechanical issues like broken faders, but Black Box has spare parts for that. I’ve never had a VENUE console crash at any show.

Thilo: The support is very important for us as a distributor. We always have people in place locally who can react immediately, especially after normal business hours.