To create an up-to-date, integrated and unified workflow for preparing daily and regular programs as well as digitizing a vast archive of media material.

Develop an integrated and efficient workflow based on the Avid MediaCentral Platform with the comprehensive Interplay Facility Bundle at its heart.

Sakha National Broadcasting Company (NBC) is one of the largest regional television and radio broadcasting companies in Russia. It is a state-funded institution operating in the Sakha (Yakutia) Republic, reporting on events that have taken place in Yakutia and creating a wide variety of programs including news, documentaries and entertainment shows about life in the region. At the beginning of 2016, Sakha NBC completely modernized its workflow, becoming the first company in the Russian Far East to implement the Interplay | MAM solution.

The company had been experiencing difficulties for several reasons, firstly due to the multiplicity and diversity of its editing systems (Edius, Adobe Premiere, Apple Final Cut). Furthermore, the workstations themselves were of different generations, with different levels of productivity, which meant the time required to prepare the same content varied greatly for each workstation. Obtaining technical support for the various types of equipment was also proving to be difficult.

The second major problem was the absence of a digital archive. “Our archive is a collection of 100,000 hours of material stored on 16mm film and Betacam cassettes. The shelf life of this media is approaching its end, and we needed to install a solution to digitize the material,” says Yuri Sergachev, head of the IT department at Sakha NBC. “We often use archival material in our programs, some of it dating back to 1974, which is why it is extremely important for us to be able to find it and retrieve it from our archives quickly. This is impossible without an effective MAM system.”

The company also lacked a unified technological process to collate and store archive material, since each of the journalists, directors and producers saved their original material on their own individual computers. There was no shared database, and over time it became practically impossible to find material as and when it was needed.

Before, we might spend an entire working day looking for a piece of material we needed. Now we just enter our search criteria in the Interplay | MAM system, including the relevant metadata, and we can find the material we are looking for in minutes.

The IT department put together a comprehensive technological wish-list to solve these significant challenges, allowing them to digitize the existing media and add invaluable metadata, connect the editing stations to a central data storage system and implement a unified system for managing the media assets.

The project was defined by a tight budget as well as the need to integrate the new workflow with the SkyLark automated broadcasting system. After a comparative analysis of solutions from various manufacturers, the decision was made to use Avid technology. The systems integrator OKNO-TV and its subsidiary in Novosibirsk executed the project.

The project resulted in the installation of a modern media workflow integrated on the MediaCentral Platform, with the Avid Interplay Facility Bundle offering comprehensive asset management capabilities together with centralized shared storage. The ISIS Expansion Engine allows capacity and throughput to be expanded as required, and Media | Director enables automated file uploading of material both as a reduced (proxy) and full HD solution.

The MediaCentral | UX interface also enables reporters, directors and journalists to independently carry out preliminary editing of visual material and prepare voice-over texts; this has significantly reduced the editing time required during the fine cut of materials in full resolution. The fine cut is carried out on Media Composer edit stations, while audio production is completed in Pro Tools to correct frequency, remove artefacts and standardize. 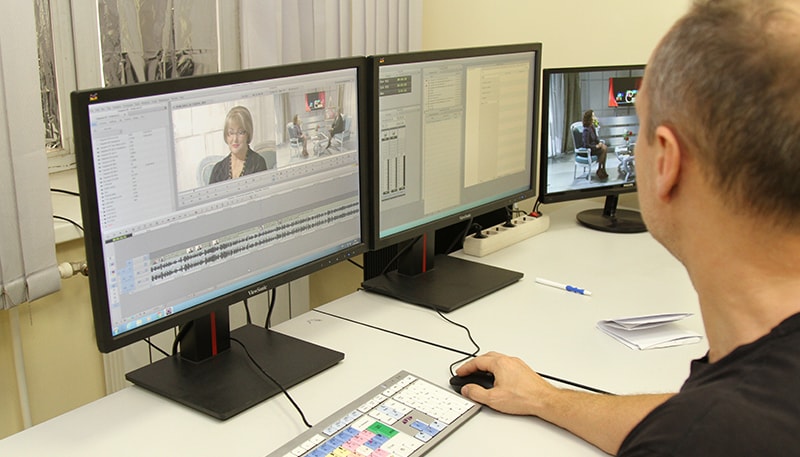 Material prepared for the air is transferred to the SkyLark broadcasting server in the appropriate file format using Interplay Transfer's FTP DHM feature, and the source file is placed in the archive. An Oracle LTO library is used for long-term storage of digitized archives. This is integrated with Interplay | MAM and the other components of the workflow.

To reduce costs, the Interplay Archive solution was not included in the suite in the first stage—instead SGL FlashNet was used to integrate archive systems with the MAM, thereby providing entry-level integration based on web services. At a later date, Sakha NBC will be able to install Interplay Archive and transfer all metadata there. All workstations at Sakha NBC are now integrated into Avid's MAM system, thus unifying the use of metadata as well as simplifying and speeding up searches and retrieval of material from the archive.

Production efficiency has increased dramatically as a result of the project, and the company has virtually eliminated the previous situation when material was available literally at the last minute before it went to air. For instance, the time needed to search for material in the archive and retrieve it has been reduced almost a hundredfold.

“Before, we might spend an entire working day looking for a piece of material we needed,” says Sergachev. “That was because we had to search manually. We did so by watching the video cassettes that had been retrieved one by one, and there might have been 20 or more of them. Now we just enter our search criteria in the Interplay | MAM system, including the relevant metadata, and we can find the material we are looking for in five to ten minutes at most. Prior to having the MAM system, preparation of a program might have been completed only an hour before airing, whereas now almost all programs in which archival material is used are ready two days before the broadcast begins.”

The preparation of daily programs has also become significantly more efficient. Here, the time savings are also manifold—the process is at least three to four times faster than before. “Preparing material for 2-3 minutes of air time took several hours before the new Avid workflow; the same task now takes less than an hour,” adds Sergachev.

For newly produced material, metadata is entered by the reporters themselves, who each enter descriptive information for their own material. As for archival material, especially very old material dating back to the 1970s, TV industry veterans are also involved in the process as they are able to recognize certain people or events in the images.

Since the customer was located in a remote region, an important part of the project was the training of members of staff to be able to use and maintain the system independently. A special four-week training program was prepared for this purpose, during which technical employees of Sakha NBC received instruction about the structure of the workflow as well as practical tuition to maintain it. Journalists, producers and directors learned how to work with MediaCentral and Media Composer, and system administrators and editors were also given specific training.

The flexible and future-proof nature of the Avid system means that the broadcaster can also plan for further improvements to its workflow over the coming months and years, as requirements change and grow. For example, the digitization of 100,000 hours of archive footage is a long process that will benefit from a forthcoming purchase of new AirSpeed servers, enabling transfers from multiple video tape recorders simultaneously. In addition, the Interplay Facility Bundle includes components such as Media Composer | Cloud, which allows users to work not only locally but also remotely. However, Sakha NBC has not started using this function yet because of the bandwidth of the public Internet in the Sakha (Yakutia) Republic.

As a result of this major project, Sakha NBC now has a comprehensive, efficient and future-proof solution encompassing all stages of its work, from commissioning through to broadcasting, all based on Avid's integrated system.