She’s done more before her 20th birthday than most people do in a lifetime. A decade after making her debut as a cast member of Barney and Friends, Selena Gomez is arguably one of the hottest star properties of the year, boasting a wealth of film and TV acting credits, a multi-platinum recording career, a line of designer clothing, and even several charity and philanthropy ventures.

Currently touring with her band, Selena Gomez & the Scene, Gomez has been selling out arenas and adding dates across North America, with no sign of slowing down. The tour’s audio systems are provided by California’s Delicate Productions, with three Avid VENUE Profile Systems, each with FOH and Stage Racks, courtesy of Hi-Tech Audio. As production manager and monitor engineer Javier Alcaraz explains, the setup is anything but typical.

“We’ve got networked Profile Systems at FOH and monitors, and a third Profile that we use for the opening act and as a spare,” says Alcaraz. “But even though the setup is based around VENUE and Pro Tools, we’ve got one computer running (Mark of the Unicorn’s) Digital Performer, and that’s pretty much running the show.”

At the helm of the computer network is Marco Gamboa, a veteran Pro Tools whiz whose credits include world tours with Shania Twain, Jennifer Lopez, and Luis Miguel. As Gamboa explains, his choice of Digital Performer is based on both function and familiarity. “Even though I do edits in Pro Tools, I’ve been using Digital Performer for many years—in fact, since it was just called Performer—so I’m very fast with it,” he says. “And the fact that VENUE makes it easy to integrate with DP and Pro Tools makes the whole thing seamless.” 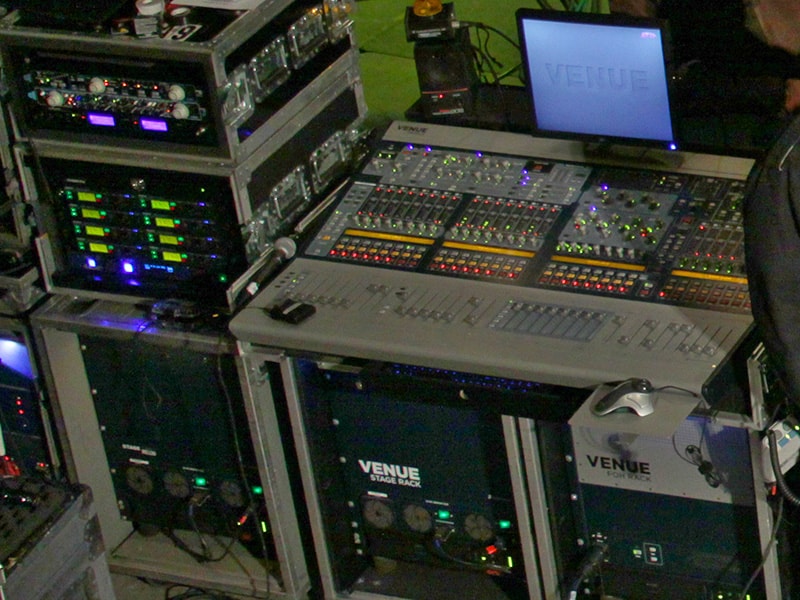 “Digital Performer is driving the whole thing,” Gamboa continues. “DP generates the timecode and patch changes, which trigger video, lights, and MIDI controllers for the band, making pretty much everything work tightly together. There’s also a click track, and the odd keyboard part here and there. The band plays most everything live, but some of the sound effects and triggered stuff comes from DP.”

Timecode is also being used to trigger VENUE’s snapshot automation, though the show is far from automated. “We originally began mapping out snapshots for every part of every song during rehearsals, but it felt far too sterile,” explains Delicate Productions audio crew chief Brennan Houser. “It’s basically a live band, and we wanted it to sound that way, so we eased off on how we were implementing the automation, using it mainly just for a starting point for each song. From there, Jason [Moore, FOH engineer] mixes it pretty much like an analog console, except for a few snapshots for effects changes and mutes.”

When we’re doing a playback with Virtual Soundcheck, that timecode can re-create pretty much the whole show—all the consoles, music, lights, video, everything. The moment I press play in Pro Tools, everything else follows.

Houser also points to the convenience of the VENUE platform for mixing and file transfers. “I’ve mixed on a lot of digital consoles, and VENUE is definitely my preference in terms of ergonomics,” he says. “And being able to save the whole show to a USB drive is a huge asset. We’ve done a few fly-in dates during the tour, and it’s great to be able to just specify that we need a VENUE system, plug our USB keys in, load up our files, and we’re ready to go.”

Perfecting the mix with Virtual Soundcheck

Every show is recorded from the monitor desk into Pro Tools, with the resulting show files used regularly with VENUE’s Virtual Soundcheck. “Having the ability to play back an entire show is invaluable if we need to readjust anything in the house,” says Alcaraz. “We don’t always have the luxury of having the band there, and we’re almost guaranteed to not have the luxury of having Selena there. She’s so tightly scheduled that our time-frame with her is absolutely minuscule. We literally get her minutes before a performance. I think we’ve sound checked with her once on the whole tour.” 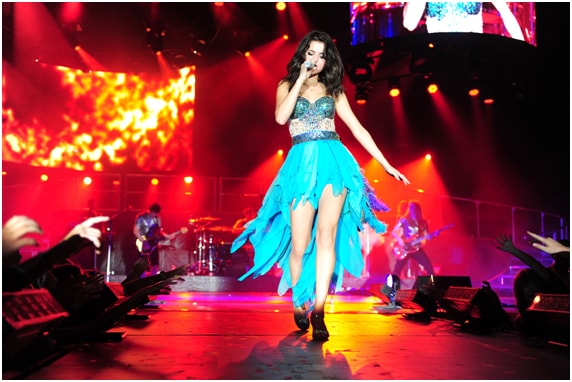 As Alcaraz, points out, on this tour Virtual Soundcheck is more than just audio. “When Marco hits play in Digital Performer, we’re sending timecode to the Pro Tools rig along with the live players,” he says. “So when we’re doing a playback with Virtual Soundcheck, that timecode can re-create pretty much the whole show—all the consoles, music, lights, video, everything. The moment I press play in Pro Tools, everything else follows.”

“We provided one of our custom 64-track Pro Tools systems, designed by Brad Madix, Greg Price, and myself, to interface with the network,” explains Hi-Tech Audio’s Louis Adamo. “During the show, the system is recording directly from the monitor console. But because both consoles are outfitted with MADI interface cards, they only have to reconfigure one or two BNC connectors and they’re feeding the Pro Tools output to both consoles—audio, timecode, everything. So essentially, they can do a full production rehearsal anywhere, anytime, even without the band.”

Although the setup is a bit complex and unconventional, as Adamo points out, it’s well within the capabilities of VENUE. “We tested out a lot of this functionality during the Coachella Festival last summer. So when Javier and Marco came to us and told us what they wanted to do, we were pretty confident the VENUE systems could handle it.”

“We always try to push the envelope a little, but we’re talking about a live show in front of thousands of people night after night, so it has to be 100% reliable,” says Alcaraz. “Marco is all about having total reliability, with backups of everything, and I’m the same way at monitors. We wouldn’t go out with anything less.”