Simon Franglen on Technology, China, and Composing in Mandarin

At age 13, Simon Franglen knew he wanted to be a composer. "Two things got me interested initially," he reflects. "One was a BBC documentary by Humphrey Burton about the making of West Side Story. Leonard Bernstein had created a new version with Kiri Te Kanawa and JosÃ© Carreras; here was this amazing orchestra and Leonard Bernstein jumping up and down â it was magical."

The other? "My dad had a cheap Akai reel-to-reel tape recorder," he recalls. "I discovered I could add a sound on top of another sound and bounce it from one track to the other."

For Franglen, it has been a crazy technology evolution ever since. "Over the years I've moved from a 2-ton synth rig based around the Synclavier when I was a session player in LA to current studios based around a few Mac Pros. I use almost no hardware, everything's inside the box, with 32TB of NVMe RAIDs for sample libraries."

But one thing hasn't changed â the need for written musical scores. "If you are going to have people play music in ensembles, you need some way of letting them understand what notes they're going to play," Franglen points out. "That involves notationâand that involves Sibelius." 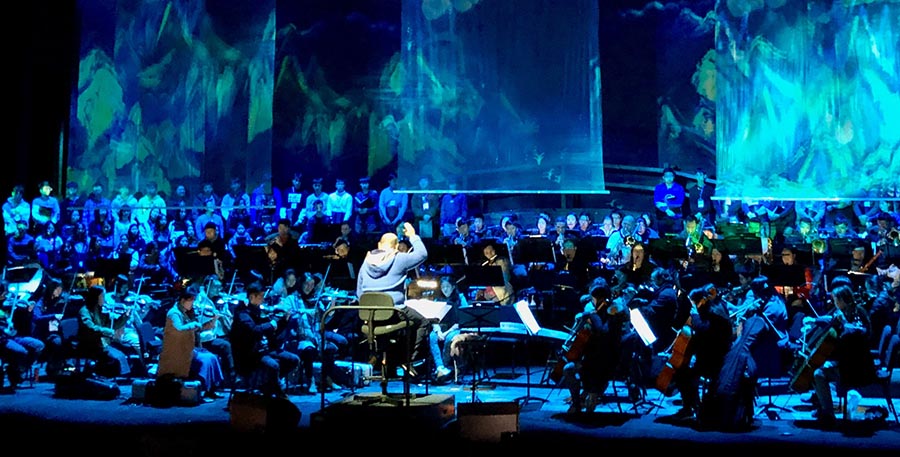 Indeed, the power duo Sibelius and Pro Tools have become crucial to Franglen's success. "I use ReWire to link the two," he explains. "I have Pro Tools and Sibelius running on the same machine, but I display them on different screens. I use a screen you can twist 90 degrees vertically for the Sibelius display."

"Of course, the new Intelligent MIDI Import feature is stupendously good. It's a sea change in connecting my MIDI in Pro Tools and its notation in Sibelius. I worked with an early version and I was astounded; suddenly a few hours of tidying up the chaos of my export from Pro Tools became a few button presses. It consolidated 30 tracks of strings into five staves while I had a cup of tea. For anyone who links MIDI and notation this is essential."

"To put how much of a timesaver this is into context, I recently wrote a 105-minute film score before IMI appeared - epic action/fantasy score, 90-piece orchestra, 30+ cues. With this feature my team would have saved two to three hours of session conversion and cleanup time per cue. You add that up over a whole film, and you've saved a week or more of someone's time just there."

Franglen's team includes orchestrators Steven Baker and Graham Foote. "Graham oversees the translations to Sibelius, although Steven is a total Sibelius wiz," he reports. "We have templates for Vienna Ensemble Pro and Pro Tools, which I tweak on a project-specific basis. I may play something into Pro Tools, and if I decide it's working well, I play it into Sibelius or type it in with the keyboard. That way my draft score can run in line with my mockup, so that I can see what's going on. Then I hand that over to Steven or Graham for the grownups to take control. Using Sibelius and Pro Tools together works very well for all of us."

Franglen's newest piece, The Birth of Skies and Earth, is a 94-minute work with a libretto in Mandarin Chinese. The premiere performance featured 176 musicians: a 90-piece orchestra, including Guzheng and Xiao Flute, 80-voice choir, and 6 soloists. "This came about because of an installation I wrote a couple of years ago, that is still running in Shanghai; a 3D immersive piece, which uses 4 interlocking orchestras playing through a torus of 244 loudspeakers currently running in the world's highest art space, on the 126th floor of the Shanghai Tower â 2000 feet up" Franglen relates. "Shanghai Media Group and the Shanghai Orchestra of Light really liked it. They commissioned me to compose a large-scale oratorio based on a libretto written by some of Shanghai's finest poets. This was to be a musical epic based on the creation myths and legends of China, from the chaos at the beginning of the universe, through the creation of heaven and earth, to end as China came into being as a country. It features giants, dragons, phoenixes, even the creation of Chinese writing and music. It was deeply fun and deeply challenging, everything one could hope for in a project."

If you are going to have people play music in ensembles, you need some way of letting them understand what notes theyâre going to play. That involves notationâand that involves Sibelius.