Required a system that supported 4K / HDR and could edit footage for highlights packages during a live broadcast.

Avid Interplay and Avid shared storage provides centralized management for the feed recording center. All 4K HDR assets can be simultaneously edited by Media Composer suites across the facility.

The two key functional areas of the system comprise: a feed recording center for collecting assets from video feeds recorded to files, and editing suites for producing completed packages. These areas are linked by a high-speed network, making it possible to seamlessly share information, as needed, between the various functions.

Avid Elite Reseller Photron developed the feed recording facility, which features four EVS XS3 media production servers and two STING recording control terminals. Up to 20 HD video feeds can be recorded simultaneously and by using the 4K-capable Avid Media Composer | Ultimate, it’s possible to play back files from Avid shared storage with little or no latency while the files are still being recorded.

Avid Media Composer | Ultimate and Telestream Switch are used to check files at the ingest station, which performs the necessary format conversions for the file-based system in batches, for data intake from external sources as well as for media output for third-party use. U.2 drives are amongst a variety of equipment installed for reading media.

For asset registration, each ingest terminal is fully integrated with the Avid Interplay | Production asset management system and, as part of future plans for developing archive facilities, it is expected that the system will incorporate equipment for the archival transfer of assets and completed packages, as well as terminals with the capacity to search and acquire archived video.

The aims and needs of SKY Perfect JSAT

Centered around sports editing and 4K support, the facility update was significant and is the first since 2009.

"We needed a system where we could edit footage for highlights packages during a live broadcast. With this update, we focused on creating a stable and efficient platform for carrying out such work," commented Masashi Mizutani, Broadcast Operations Division, SKY Perfect JSAT Corporation. 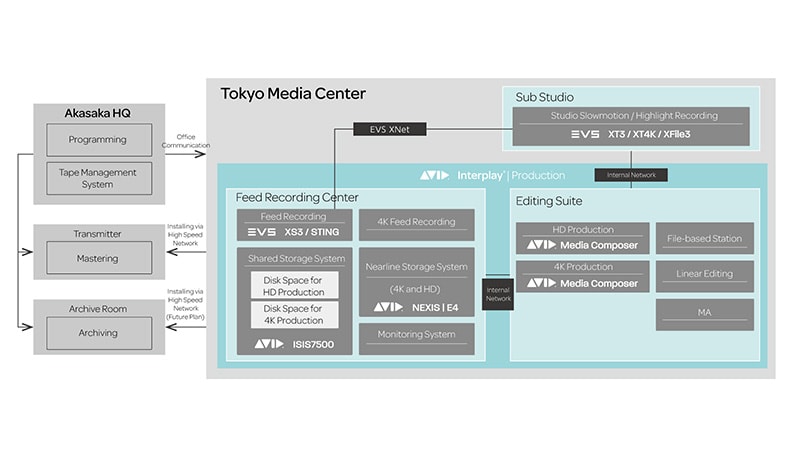 With EVS already deployed in the production control rooms, its proven platform was a major factor in the choice to adopt EVS XS3 as the recording platform. This, coupled with the capacity to record 40 primary and secondary feeds simultaneously, and the ease of integration with the existing system made the XS3 a relatively easy selection.

"We expect there will be cases where we will make full use of 20 feeds for sports broadcasts, focusing mainly on live coverage of overseas soccer matches. For the facility overall, in addition to meeting these operational requirements, we focused on connecting everything with an end-to-end file-based network," said team member Hiroyuki Furuya.

As the production control rooms will also inevitably be upgraded too, "support for 4K was also a major factor for us," added team member Takaaki Yamada.

With this in mind, Photron developed the recording control terminal, STING, which absolutely met the client brief. STING answered the operators’ workflow in a way that was similar to the previous Avid Airspeed ingest, but which was incompatible with the new EVS XS3 required for 4K compliance and sharing of sub-material and line recording.

Client feedback was encouraged and carefully listened to during the development stage to ensure a smooth transition and ease-of-use.

"It became very easy to use" commented Mr. Mizutani. "In addition to the loop recording function, which is one of the core functions of EVS, there is additional functionality, such as incorporating mechanisms to protect the material” added Mr. Furuya.

“EVS is provided with a control protocol that can fully exploit its features. By making full use of it, we can develop updates, as required, so that our customers' requests can be used in a system-wise manner " added Tsutomu Nakayama, Video Solution Business Unit, Video Production Sales Division, Photron.

In fact, original customization of the client, ranging from layout and various expressions on the application are already being applied. 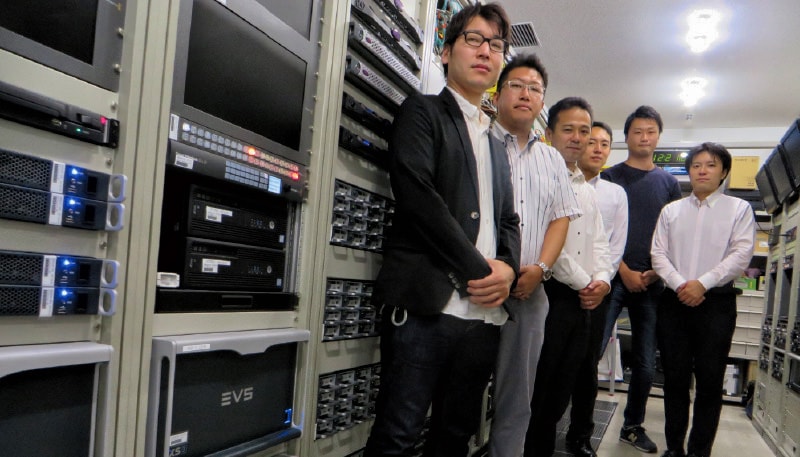 The production facilities, from the ISIS | 7500 shared storage to the Avid Interplay asset management system, as well as the Avid Media Composer | Ultimate video editing software, were selected with a focus on 4K support.

The ISIS | 7000 system, installed in 2009, was completely replaced and the introduction of the ISIS | 7500 as the recording server established "the largest-scale system in the Asia-Pacific region," according to Takashi Tomoi, Enterprise Sales Manager for Avid Technology. “This demonstrates SKY Perfect JSAT's confidence in Avid products. Their strong trust in Avid was further underscored by their adoption of the NEXIS E4 nearline storage system, which debuted just last year.”

Previous experience with Avid products played a major role in building trust between the two companies. The addition of HLG support to the Avid editing software was notable and a contributing factor. "When we were discussing our needs, it was mentioned that Media Composer did not support Hybrid Log Gamma (HLG). In response to this, we worked with SKY Perfect JSAT to provide feedback to our developers, who were then able to implement HLG support," commented Mr. Tomoi.

A forward-looking and flexible system with tapeless operation in mind

The system adopted by SKY Perfect JSAT is forward-looking and flexible, with support for technologies such as 4K/HDR.  Mr. Mizutani describes it as "a system designed for a post-HDCAM world."

The system supports file delivery to the master control room, establishing a flexible workflow. The EVS servers in the production control rooms are connected to the studio feed recording center by XNet, and recorded assets can be delivered to the Avid system over a network, or output to an external hard disk.

Mr. Mizutani comments about future archiving saying, "We are considering a networked system based on optical disk storage," as part of the effort to realize tapeless operation.

SKY Perfect JSAT Tokyo Media Center is one of Japan's largest state-of-the-art file-based systems, and serves as an outstanding example of operational innovation, worthy of the attention of the broader industry.

(excerpted from the October 2017 issue of Gekkan New Media)