In 2008, a start-up out of Sweden turned the music industry on its head with the introduction of Spotify, a music streaming service that provides DRM-protected content from both labels and artists. The service now boasts more than 100 million subscribers and is available in 65 regions and counting. As part of their ever-evolving offerings, Spotify Technology, the service’s parent company, introduced a series of original artist recordings called Spotify Singles. Transitioned from Spotify Sessions, live performances originally arranged for employees, the weekly series is recorded at Spotify Studios in New York City and features both originals and covers from some of the world’s most loved artists including John Legend, Jack White, St. Vincent, Niall Horan, Kelly Clarkson, Jennifer Lopez, Wynton Marsalis, Ed Sheeran, Noah Jones and Miley Cyrus. Avid sat down with William Garrett, chief engineer at Spotify Studios NYC to talk about the studios’ workflow, what technology they rely on and how they capture the musical magic.

You studied at Berklee and were at Sony/ATV for a long time, in addition to being an independent studio owner. What drew you to Spotify? Can you tell me a little more about life before you joined the team?

I went to Berklee a while back—before they had a Music Production & Engineering major—and was a composition major with guitar and voice as my instrumental major. I had done some recording in high school and while at Berklee, I got a job sweeping the floors in a local Boston studio and learned to engineer the old fashion way. Then came freelance producing, recording and mixing, started my own record label, etc. Then, I headed to NYC as a freelancer. I was asked to set up and run an in-house studio for Sony/ATV, which I did for 15 years. After Sony/ATV, I opened my studio, Electracraft, in NYC and later opened Electracraft WEST in Hollywood. Then this fantastic opportunity came up to be chief engineer for Spotify’s studio and be a part of Spotify Singles.

How did that project start and how has it evolved since?

Executive producer Bryan Grone transitioned Spotify Sessions, which were live recordings of artists recorded in performance for Spotify staff, into Spotify Singles, utilizing the recently constructed in-house studio. Since the first recording we did in July of 2016, we’ve now racked up over 1 billion streams from the Spotify Singles playlist.

How did you decide what tools and gear to use?

My experience helped me know what I wanted in terms of gear. Lots of obvious choices in terms of mics and mic pres. I have been a Pro Tools user since Session 8, so that's my go-to DAW.

How did you integrate MTRX with your existing HD systems? If the studio was designed with MTRX in mind, why did you choose MTRX over other solutions?

We replaced a non-HD system that we felt was limited in terms of fidelity, track count, etc. In choosing Pro Tools | MTRX, we knew we were getting not only cutting edge tech, but a familiarity and reliability that we have come to count on.

How do you quantify the sound of MTRX?

We move very quickly here, so we installed MTRX and went right to work. We noticed great sonics and a significant improvement in the clarity, plus enhanced stereo imaging and width. MTRX steps up the transparency and fidelity, boosting the overall recording quality. 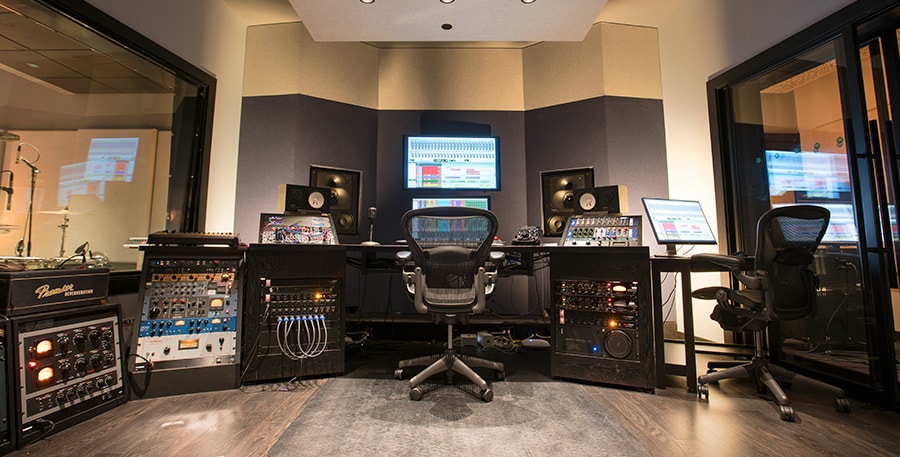 What advantages have you gained from the upgrade?

We mix in a hybrid setup utilizing the best of the best in the digital domain, combined with outboard gear as hardware inserts. MTRX makes this so easy. And we've only scratched the surface. As we continue to expand, we look forward to embracing the vast routing options, linking studios together, and connecting with producers and engineers operating in separate DAWs.

How many projects do you usually have going at one time? Who works on them?

What does a typical recording session workflow look like?

We work with the artist's team to plan the sessions (instrumentation, personnel, instruments to be used from our backline, songs to be recorded, etc.), so when the artist arrives we have the studio set to record. Then, we get everyone comfortable, start recording, and make adjustments as we go. Some bands knock out live takes and others build tracks with basics and overdubs, which ever method or combination makes for the most unique and exciting tracks.

What is it about Pro Tools that has made it the tool you rely on?

I've been a Pro Tools user from day one, so it's what I know. But on top of that, it's flexible and universally used. And with the speed we work and amount of work we do, the reliability is a major factor.

What's the one thing you want people to know about the great work you are doing at Spotify studios?

We have this amazing opportunity to work with some of the most talented people on the planet. It's really gratifying to put together an environment with the right vibe, gear and experience that facilitates rapid-fire high level creativity. Every day we get to participate in making some incredible music!