Avid Goes on an Epic Journey with Star Wars: The Force Awakens

The word “epic” has been used to describe a number of feature films over the years, but none have been as deserving of that description as those in the Star Wars franchise. So much has changed since we last visited that galaxy far, far away. As always, there are new characters, worlds, heroes, and enemies. And, of course, there are new digital technologies and techniques available for the production and post-production processes, enabling the technical artists and editors to boldly go where no man has gone before.

You might be thinking, what’s a Star Trek reference doing in a story about Star Wars? Well, there is a connection. A big one. The Walt Disney Company acquired Lucasfilm, including the stellar visual effects facility Industrial Light & Magic (ILM), which helped bring the previous Star Wars visions to life, as well as the Star Wars franchise itself. With the deal came the long-awaited announcement of three new Star Wars films. Soon after, director JJ Abrams was selected to helm the first sequel.

Among Abrams’ many successes is the reboot of the “other” big science-fiction film series, Star Trek. By his side for those two space journeys were editors Maryann Brandon, ACE, and Mary Jo Markey, ACE, both of whom once again joined the director for what is considered an even bigger adventure of his career as he reintroduced Star Wars. Associate editors Julian Smirke and Matt Evans rejoined Abrams, Brandon, and Markey, as well, having worked with the trio on Mission: Impossible III, and every Abrams film thereafter. 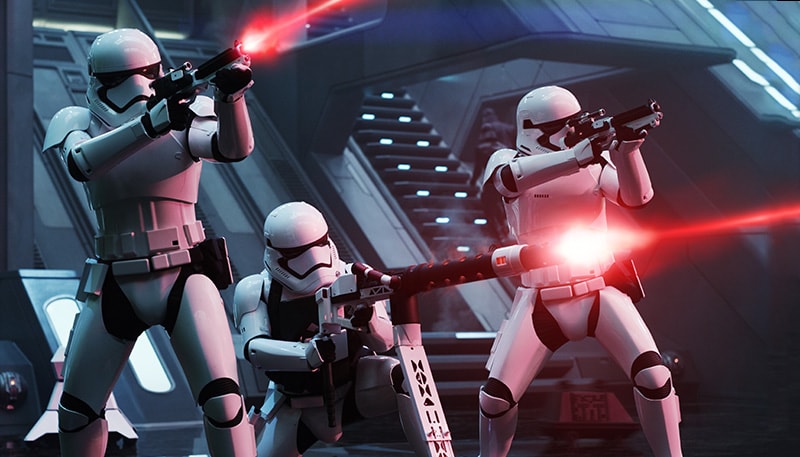 Bad Robot, Abrams’ film and television production company, is where work on the director’s projects, including The Force Awakens, is done. The production company has embraced Avid Everywhere, using the Artist Suite's proven and trusted audio and video editing tools, Media Composer and Pro Tools. The editing team use anywhere from eight to 12 Media Composer systems, depending on where they are in the process. They also use Avid Storage Suite shared media storage, which is connected at Bad Robot via Ethernet, so employees can collaborate and be added easily as needed. 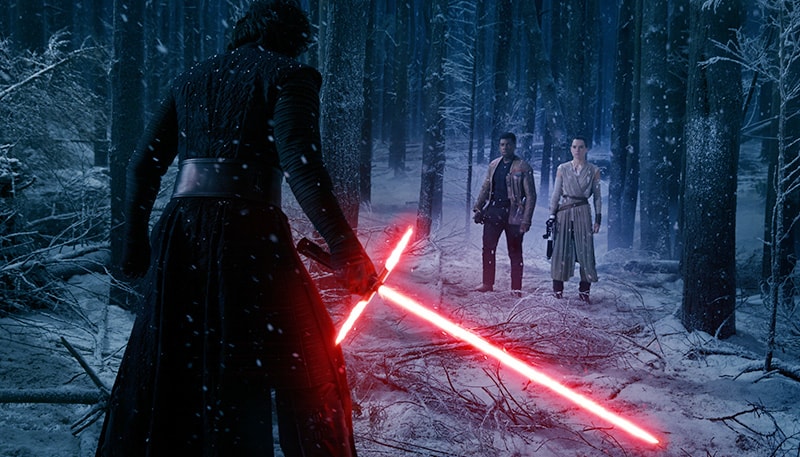 A strong bond among coworkers

Trust is vital when working on a large, monumental project, and it’s not forged overnight, but rather over years of working side by side. This accounts for the smooth rhythm the editors and director have. Markey started working with Abrams on his first TV series, Felicity, and then first met Brandon when they both began working with Abrams on the hit TV series Alias. They’ve also edited all of Abrams’ films. And, it works.

For Alias, Brandon and Markey worked on different episodes but consulted each other often. On the feature films, however, they worked closely, collaborating and watching and then discussing the dailies together before splitting up the work, each ultimately responsible for her own lengthy sequences.

“Mary Jo and I both work closely with JJ,” says Brandon. “He’ll spend as much time as it takes working with me to make sure a scene works. There’s a lot of deconstruction and reconstruction, or sometimes it just works as is, in my first cut. I think the trust goes both ways. He knows he can count on me for my honest reaction, as well as my best shot every time—even if it’s something we might not agree on. I believe his trust in our voices comes from years of making things work that all of us thought couldn’t or shouldn’t.”

As for Smirke, he too has worked closely with the editing duo, so much so that they’ve even developed a shorthand system, making things easier all around. They understand what the other is trying to say; no lengthy explanation is needed.

Similarly, editors need to trust the equipment they’re using; Avid Media Composer is their go-to NLE on projects, particularly those of this magnitude. “Media Composer really has all the tools you need for making a film of this scale. It can handle everything for turnovers to sound, music, and VFX departments,” says Smirke.

To make the assets more manageable and trackable for other users, Smirke and Evans generate a database for marketing and management to use for locating specific shots and technical information as needed. The main editorial codebook, created using VFX editor Martin Kloner’s FileMaker Pro databases, includes all the dailies imported from Avid bins. That codebook links up to all the other databases used for the visual effects, continuity, ADR (automated dialog replacement), and turnovers.

The Force Awakens was shot using a variety of cameras and formats. In fact, Abrams is one of the few directors who still prefers to shoot on film rather than digital. To this end, the film was shot primarily at 35mm cinemascope and 65mm IMAX for some scenes. “On Star Wars: The Force Awakens, we used Media Composer to manage 35mm, 65mm, digital, and 3D for final delivery,” explains Smirke.

Media Composer really has all the tools you need for making a film of this scale. It can handle everything for turnovers to sound, music, and VFX departments.

A visual guide to editing The Force Awakens

Viewers and critics alike have lauded The Force Awakens for having visual effects that recapture more of the tactile, visceral quality of the original three films. Similarly, the set design and screenplay honored that tone and thematic design. Yet, when it came to editing, Brandon says rather than looking to the past editing for inspiration, she looked to herself instead.

“While I was editing The Force Awakens, I didn’t think about the original trilogy, I just tried to make the most compelling story I could,” says Brandon. “I remained true to my style of editing, which is story- and character-driven. I take great pains to choose performance and nuance to shape a scene. I believe that is how it works for any film I’ve ever cut, including the animated ones,” explains Brandon, whose work extends to How To Train Your Dragon and Kung Fu Panda 2. “What we did use from the original films were the soft wipes between locations. That’s really all we took from those films.”

“For J.J. it was really important that this film have the feeling of delight, adventure and fun—the spirit of the original—and that that was something we kept at the forefront of our thinking during our editing process,” says Markey. “I don’t really try to impose a style on the material. My approach is kind of always the same—looking through the dailies for moments that really speak to me, where I feel what the character is feeling, or, where I feel the actor is the most invested that he can be. I try to bring those together into the scene and create a point of view for the scene and a guide—a way the viewer feels guided through the scene by a single point of view.”

As Markey notes, overall she and Brandon have total creative freedom in their first cuts, and then the director’s cut with Abrams “is a true collaboration”. 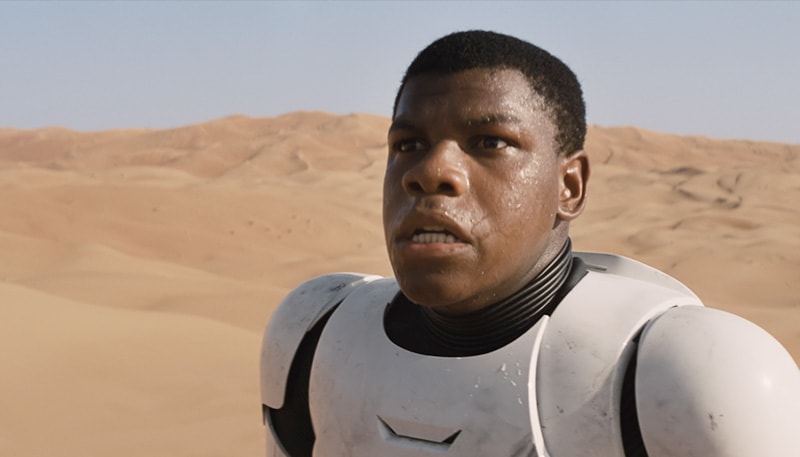 Star Wars is often referred to as a space opera: a stunning orchestration of visuals as well as a symphony of sound. And The Force Awakens is no exception. The importance of sound in the original Star Wars actually gave rise to Skywalker Sound, established in 1975 originally as Sprocket System, to handle the soundtrack for the first film.

It was important to Abrams that this movie embraces its classical roots, and a big part of that involved the sound. To this end, the group at Bad Robot was cutting in sounds from the Lucasfilm archives from the start. “The overall challenge for the sound was to adhere to that classic formula but then bring it up to date,” says Will Files, sound designer at Bad Robot.

Files points out that at the start of a project, he likes to provide “a goodie bag” of sounds to picture editorial so they can start with a rich palette of sounds, and for The Force Awakens, they were provided both classic sounds from the Skywalker Sound archives and new libraries of custom  sound design to start with. Adds Brandon, “We needed sound to cut with, so we were constantly asking for sound.”

New editing workflow a boost for The Force Awakens

Whereas production work for editing is very technical, once the group moves to post, “things are a lot more creative, and that’s when there are a ton of temp sound effects that we need to design and edit,” says Smirke.

While sound work was in progress at Skywalker Sound, the film editors had to continue their process, which entailed incorporating a temporary 5.1 surround sound mix. According to Smirke, the group did this for the first time on Star Trek Into Darkness (2013) when the capability became available on Media Composer. As a result, the editors were able to experiment with sound design throughout the editing process, so the film could be screened without sending it off for audio work first. Also, this capability can make transitioning from temp to final sound design much smoother.

“On The Force Awakens, it was a lot easier, having done it before. So we continued doing a 5.1 temp mix throughout,” says Smirke. “It’s really useful for JJ, as he can hear a much more refined presentation of the film when we have our internal screenings.”

“We were doing tons of stuff with Avid. We still created sounds outside the system and then mixed and panned them so the work could evolve with the cut. The 5.1 mix is invaluable,” adds Stambler.

Having a temporary soundtrack was especially important since many of the film’s animations and visual effects—2,100 of the 2,500 shots contained CGI—weren’t completed until the final days of editing. This was both a blessing and a curse: a curse because the action and timing have to be figured out, and a blessing because dialog and timing/action can be changed to suit the scene. 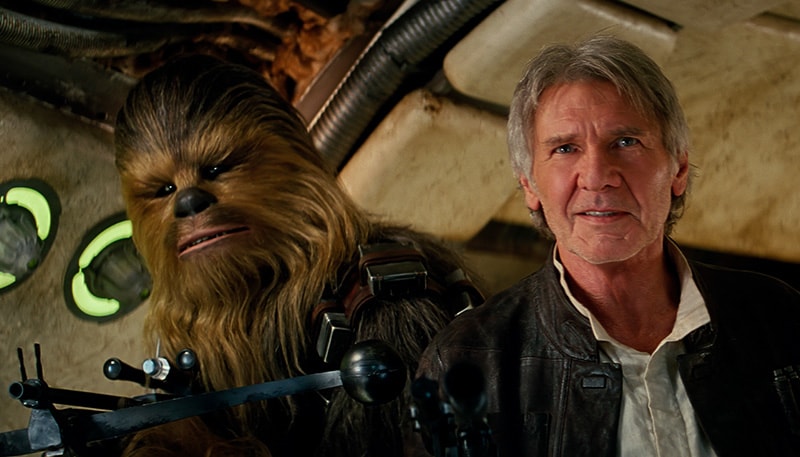 Adding music, sounds, and voices to the edit

John Williams started to compose for The Force Awakens early on, so the editors had the luxury of using some of his music in the edit. However, Brandon prefers to wait until the music is nearly done before adding it to a scene, as she says it usually throws her off unless it’s a music-driven scene.

Sound effects, though, are different. Once Brandon has a scene ready, she hands it off to Smirke. “He does a fantastic job of sound-effecting it,” she says.

As fans know, there are celebrity voices hidden throughout the cut of The Force Awakens—one being actor Daniel Craig, who plays a stormtrooper. “We did ADR with him. He was so sweet and so funny,” recalls Markey. “He had about 10 minutes between doing his own press for Spectre, so there was no time. We had him run off a bunch of lines, and he just kept saying whatever popped into his head because he was wearing a mask and could say anything.”

In fact, Markey says the group had tons of fun in the editing room with all the actors. “They were all so generous, smart, and talented, and all of them wanted the film to be great.”

For those who have been inspired by the Star Wars films and also want to pursue a career like Brandon and Markey, Brandon has some advice to filmmakers when it comes to editing—keep going. Don’t settle for a cut that only sort of works. Spend time on it, and listen to the reactions people have. She advises to look at what comes before and after a problem, since sometimes a problem can be solved by changing things that come 20 minutes earlier.

Not surprising, the editors are proud of the final edit of this history-making film, and well they should be, as the culmination of their work kicks off a new era for this epic franchise.