Provide high-quality live sound for one of the UK’s most popular pop music festivals.

The annual Capital FM Summertime Ball presents the UK’s most popular pop acts in a festival-like setting. This year marked the Ball’s third anniversary, and 75,000 fans from around the country packed the new Wembley Stadium to sing and dance along with Jennifer Lopez, Nicole Scherzinger, Cee Lo Green, Ne-Yo, JLS, Enrique Iglesias, The Wanted, and Jessie J, and more.

The demands of any festival are tremendous—the production staff has to ensure that each act receives the best possible sound, in often daunting circumstances, with minimal turnaround times. The Summertime Ball is no different, and Liverpool-based Adlib Audio Limited had to deal with getting 12 acts on and off the stage with only three minutes between sets. As an added bonus, it rained during much of the show.

Ian Nelson, senior engineer at Adlib Audio, studied the riders of the featured performers before selecting any gear for use at front of house and monitors. Because many of the scheduled acts were currently on the road with Avid VENUE systems, he felt that choosing a pair of 48-channel VENUE Profile Systems and one 48-channel VENUE D-Show System at the FOH position was a natural. 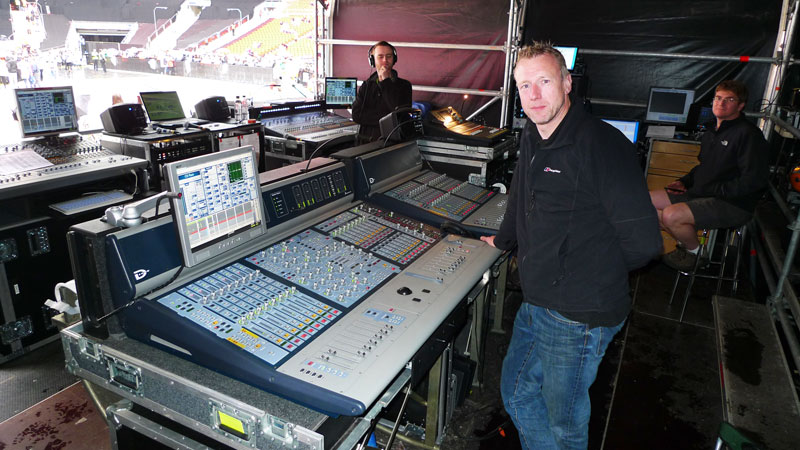 “Not only did we have a lot of bands to get through with very short changeovers, there was a huge variation in the production requirements for each band,” Nelson reports. “It went from five inputs to full live acts with up to 48 inputs. The other thing about this show was that once it started, it didn’t stop until the last band walked off the stage. Something was happening every minute, whether it was a band, VT or presenters.

“The Profile was the right pick, because it is such a flexible platform for this type of show,” Nelson continues, “and it was, by far, the most requested item on bands’ technical specifications.”

Robb Allan, solutions development manager at Avid, was on hand to help mind the Ball’s FOH position. Allan also got a chance to get behind the board to mix Nicole Scherzinger and LMFAO, the two acts that didn’t arrive with their own FOH engineers. Allan got involved in the project while Nelson was picking gear and building show files. “We looked at what each act had or required in terms of files and channels and then came up with a plan,” Allan says. “The fact that so many of them were touring with a VENUE made it easier.”

According to Nelson, some show files were supplied in advance of the show and others at rehearsal (there was a day and a half of soundcheck before the show opened). Allan and Nelson created generic show files for the bands that didn’t have any prepared.

“It helped that we could store channel presets after an artist had been across the console and recall them to the new generic files as a new artist rehearsed,” Nelson explains. “Also, the ability to move channels around and insert new channels in the patch list allowed us to modify the files without having to change the entire patch scheme and re-label the entire desk.”

At FOH, Nelson opted to link the two Profile Systems with the D-Show for a host of reasons. “The D-Show was running the VT feeds and the presenter mics, and was the matrixing point for the live band consoles,” he explains. “The extra faders and controls that are available on the D-Show console made it easier to keep track of what was going on during some very hectic moments.” 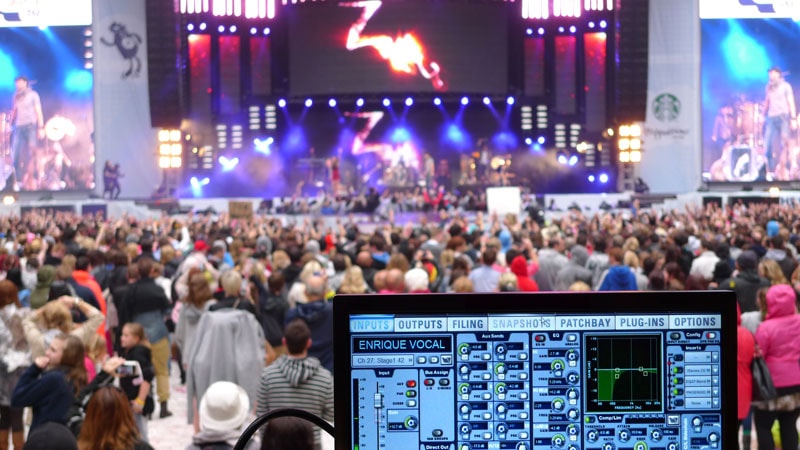 According to Nelson, the Profile System was the perfect fit because of its rider popularity and ease of use for newcomers. The addition of the D-Show System and the extra D-Show Sidecars helped engineers deal with the fast turnarounds. “Some of the turnarounds were as short as 60 seconds,” he says. “There was never a point during the show that we had time to take a breath. When an artist was playing, I was constantly monitoring the show comms network to plan the VT and presenter links for the changeovers. During the VT presentations, we were constantly line checking or bringing artists on the revolving stage to start the next live portion of the show.”

The Profile was the right pick, because it is such a flexible platform for this type of show, and it was, by far, the most requested item on bands’ technical specifications.

Moreover, because Avid VENUE systems directly support Pro Tools plugins, it enabled the engineers to tap into a reserve of effects and sound processing plugins, including Crane Song Phoenix to give warmth to prerecorded tracks, Antares Auto-Tune, and Waves’ multiband compressors. “Because of the huge number of plugins available on the VENUE, all of the acts’ extreme sonic requirements were easily answered on that platform without any external effects units,” reports Robb. “No one asked for a plugin that we didn’t have.”

For front-of-house engineer Andrew Thorton, who is currently touring with UK boy band The Wanted, seeing the Profile System at the Summertime Ball was comforting. “The Profile has been my desk of choice for the last four years,” he says. “The quick changeovers meant that you needed to be on the ball, and having it as the house desk was an amazing help in this department.” 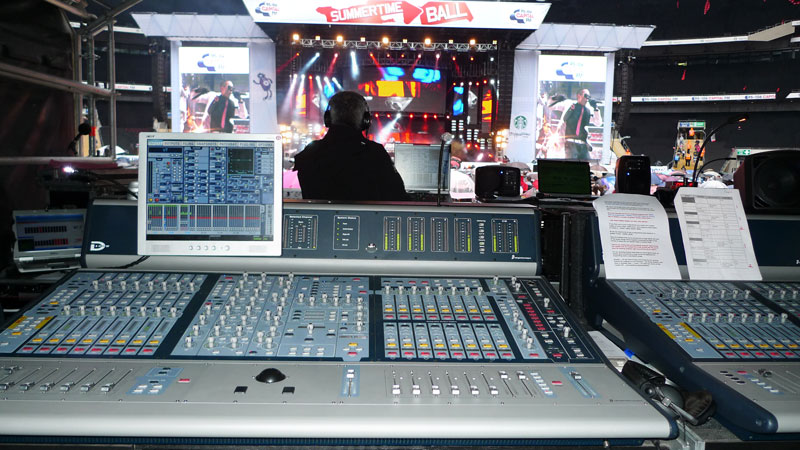 Indeed, in the less than three minutes that Thornton had to get ready for his band to perform, he had to recall the show files and set up the first snapshot. “My show file loaded right away and I was back to where I left the desk on the show before,” he says. “I love the plugins rack and how you can opt in and out of snapshots in an intelligent way. It’s great to be able to move inputs anywhere on the board at the click of a button.”

During The Wanted’s set, Thornton mixed with WavesLive V8, Sonnox Dynamics, Sonnox TransMod, and a handful of the Avid VENUE bundled plugins. Because the boys wound up spending much of their set performing in front of the PA, he also had to quickly find and use another EQ plugin on the fly to avoid any feedback. “I was able to quickly load another EQ over the vocal group to help with feedback issues,” he says. “That EQ was then added to the snapshots for these songs for easy recall.”

For Nelson and the Adlib team, this was one of the more memorable events they had worked. “This was the first show we have done in the new Wembley Stadium,” he says. “There were a handful of challenges, as there would be with a show of this size, but at one point I looked out from the front-of-house tower to see every seat in the stadium filled and then all the way back in the nose-bleeds there were people jumping around and having a great time. That makes all the effort worth it.”