Cut a massive amount of complex material from many sources, often in the same frame, into a fast-moving yet comically nuanced film.

Academy Award-winning editor Barney Pilling and his team embraced Avid Everywhere, using a workflow powered by the Avid MediaCentral platform, to create one of 2014’s most acclaimed films.

Wes Anderson’s The Grand Budapest Hotel narrates the adventures of legendary concierge Gustave H. (Ralph Fiennes) at a famous European hotel from the fictional Republic of Zubrowka between the first and second World Wars, and Zero Moustafa, the lobby boy who becomes his most trusted friend. ACE Eddie Award-winner and London-based editor Barney Pilling cut the acclaimed film, earning him his first Academy Award nomination.

Spanning a wide range of genres, Pilling has worked on everything from dramas to romantic comedies, with his most notable work including the 2009 film An Education and Mark Romanek’s Never Let Me Go. For all his editing projects, Pilling has embraced Avid Everywhere, relying on Avid Artist Suite creative tools, and Avid Storage Suite solutions, powered by the Avid MediaCentral platform. 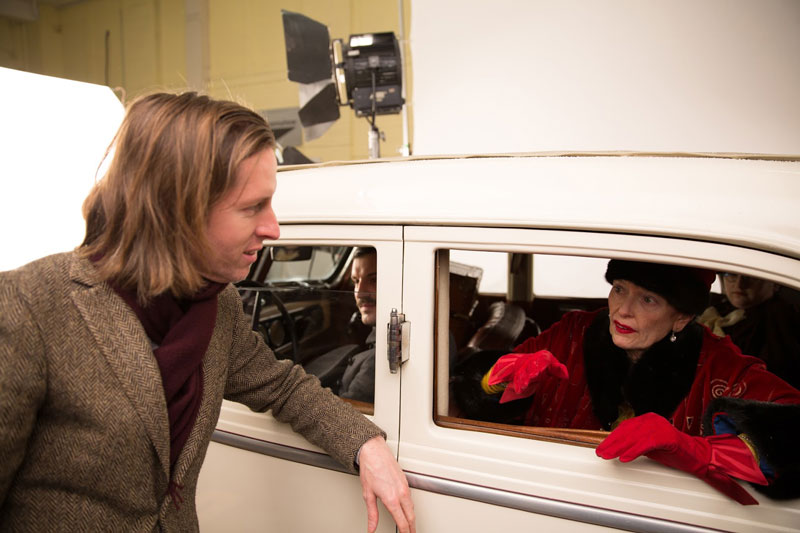 A longstanding relationship with Avid

The initial choice to use the industry’s preeminent editing solution, Avid Media Composer, was an easy one for Pilling. “I started using Media Composer in 1998 because it was ubiquitous in British television, where I began my assisting career. It was really the only widely used editing software at the time,” he says. Over time, as Pilling became ‘incredibly fast and proficient’ using the system, the speed with which ideas are translated into results on screen remain one of the system’s most significant advantages. Avid’s longstanding leadership position in the market also brought benefits. “As other non-linear editing systems come into the marketplace, they change, morph, get bought out, disappear and so on, but Avid has proved to be the most stable and consistent platform out there,” he says. “Their support for the professional editor has been totally unwavering and that really solidifies my relationship with the company.”

Media Composer is an incredibly fast and intuitive tool. The software’s acceptance of so many differing formats and codecs played a large role, as did its organizational capabilities.

Describing his working relationship with Anderson, Pilling says: “Wes and I didn’t spend that much time together during the shoot because the demands of filming were so high, but once shooting stopped, we had 10 weeks of very intense work together in the cutting room getting the film together.” The collaboration broadened as the post-production workload mounted, all facilitated by Avid’s Media Composer software. 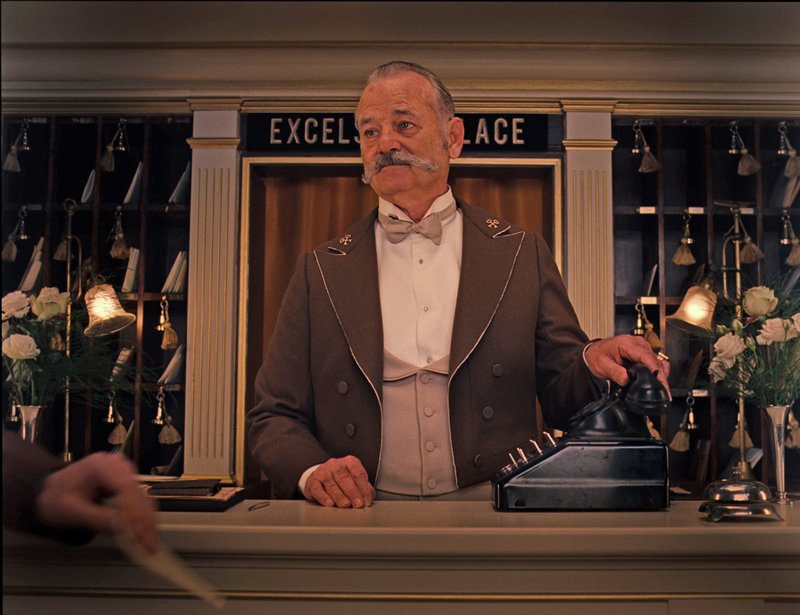 The tight team and process included working closely with the film’s producer Jeremy Dawson who, due to his skill and experience, also acted as the visual effects producer in many ways. Pilling’s associate editor Steve Perkins also became more involved, corralling the various production elements that were being created across the globe. Further into the post process, the team also worked closely with sound designer Wayne Lemmer, and once Oscar-winning composer Alexandre Desplat’s score began filtering into the cut, music editor Yann McCullough.

Avid systems are designed specifically to help streamline and expand collaboration in the editing workflow, with all processes linked to the main project and media. Media Composer and the Avid ISIS 5500 shared storage system did just that, facilitating real-time collaboration between all members of the international team.

A 4GB fiber connection produced relatively high bandwidth, essential because of the team’s work with DNx115. This was crucial to Pilling because they “often had video layers into double figures in order to comp the elaborate effects and frame manipulation that a Wes Anderson film requires.” 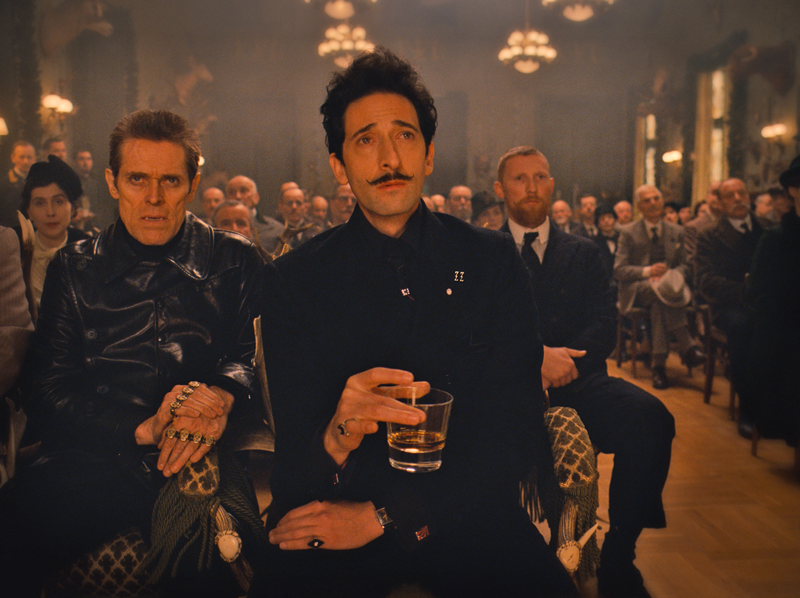 Bringing it all together—a grand culmination

To Pilling, “Media Composer is an incredibly fast and intuitive tool. The software’s acceptance of so many differing formats and codecs played a large role, as did its organizational capabilities.”

According to Pilling, Media Composer’s media management capabilities also proved invaluable to the project: “The project/bin structure is a great cataloging tool and the media management and organization is streets ahead of anything else, I think. This also helped in a big way when I went mobile. At several points in the editing process, I had to move the edit with Wes to Paris, or central London – our main base was in Kent. This was easily achieved, and Steve Perkins managing all this from afar and sending media and bin updates back and forth kept both systems up-to-date and in sync. It worked brilliantly.” 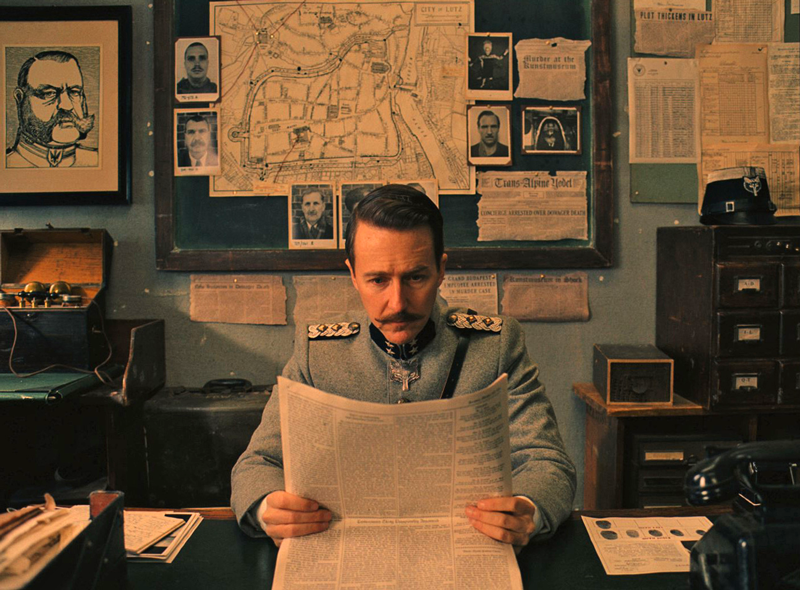 “There is so much going on in every frame that hopefully nobody really sees—it really is a complex mosaic of split screens, re-speeds, building comps, even marrying two different performances in the same frame sometimes. All meticulously spliced so the rhythm of the script translates to the screen,” Pilling explains.

Pilling recounts the challenges of a specific scene that illustrates the complexity of so many different and fast-moving elements: “The chase down the mountain as Gustave and Zero chase Jopling in the snow has so many elements from so many different sources. We had live-action cast members shot against a green screen in Germany, matte painted vista backgrounds, helicopter footage shot on 35mm, and various large-scale models, all being done at Studio Babelsberg in Berlin.”

The film’s lead animator, Andy Biddle, was stationed in London, creating animated stop-motion puppet sections that were seamlessly integrated by Look FX in Los Angeles. “To manage all of these wonderfully creative elements all happening at different rates, and to keep the cutting married to the rhythm of the comedy and action with working temps was an immense challenge. It kind of sums up how imaginative and challenging the editing was,” explains Pilling. 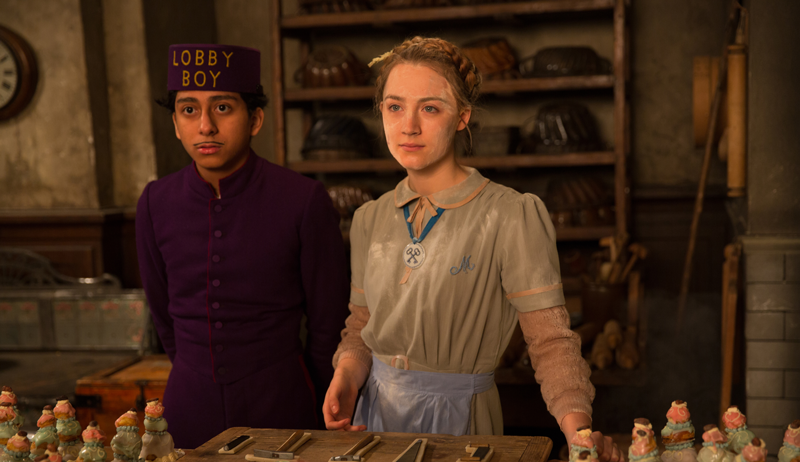 “The rhythm of the script was so fast and Wes’ characteristic camera moves all play into the wonderful tempo of the editing. It was a joy to cut in that respect,” Pilling says.

Media Composer’s audio tools helped achieve premium sound across dialog, music and effects. “Wes and I are incredibly meticulous about sound design and the quality of the dialog tracks, so the audio tools at my disposal in Media Composer were instrumental and also a joy to use,” explains Pilling. “We used the Avid D-verb plugin for ironing out the quality of different mics and adding interesting and dramatic spatial changes on edits, and made extensive use of the time compression expansion tool for re-voicing different vocal performances into the preferred picture take. Again, just the power to have so many tracks enabled us to create a very vibrant blueprint for the final mix. Phrasefind in Media Composer also came in handy at the rushes phase—it really helped line up all the different readings of a particular word or line for fast assessment.”

To Pilling, “It was extremely rewarding and challenging working with Wes on The Grand Budapest Hotel, in equal measure. The standard of workmanship on the film is second to none, I believe. The design, costumes, make-up, photography, performances… it’s all so wonderfully executed and the pressure of bringing this all together to make it rhythmically ‘sing’ in what was a relatively short period of time was really hard work. It stretched my capabilities, and indeed the capabilities of Media Composer, to the limit and beyond. I’m grateful for that and very proud of the results.”