Bring together a team in different locations to cut The Martian, while dealing with vast amounts of footage from multiple cameras and extensive VFX, all in 3D and on a shortened timeline.

Ridley Scott’s The Martian, the story of astronaut Mark Watney (Matt Damon) and his struggle to survive on Mars, has already made a sizeable impact on the box office. Having made it through a storm on the red planet during an expedition in which his fellow astronauts believed he died, Watney is left behind as the sole resident of Mars. He is forced to rely on his training and ingenuity to stay alive, while also figuring out how to get a message back home.

The Martian has been praised not just for Damon’s largely solo performance, but for the attention to detail and ‘getting the science right’. NASA expertise was drawn upon in devising technology and locations that a Mars expedition would be likely to experience in around 20 years, a time specified in Drew Goddard’s screenplay, based on the novel by Andy Weir.

To ensure such a dramatic story was not just a believable spectacle, but also great entertainment, Ridley Scott turned to his Prometheus team, a cadre of experienced filmmakers including cinematographer Dariusz Wolski, composer Harry Gregson-Williams, production designer Arthur Max and editor Pietro Scalia.

With a collaboration with Scott that began on GI Jane, Pietro Scalia is one of today’s great editors, recognized with two Best Editing Oscars for Oliver Stone’s JFK and Black Hawk Down for Scott. He has been nominated twice more for Good Will Hunting for Gus Van Sant and again for Ridley Scott, with Gladiator. So it’s no surprise to find this talented editor working again with Scott on his latest hit ‘sci-fact’ adventure.

“After so many years you begin sharing similar ideas and sensibilities and you obviously develop a shorthand,” says Scalia. “Ridley gives me complete creative freedom to bring my own point of view and interpret the material. He leaves me to it. I can choose performance takes, music, anything, and present it to him." 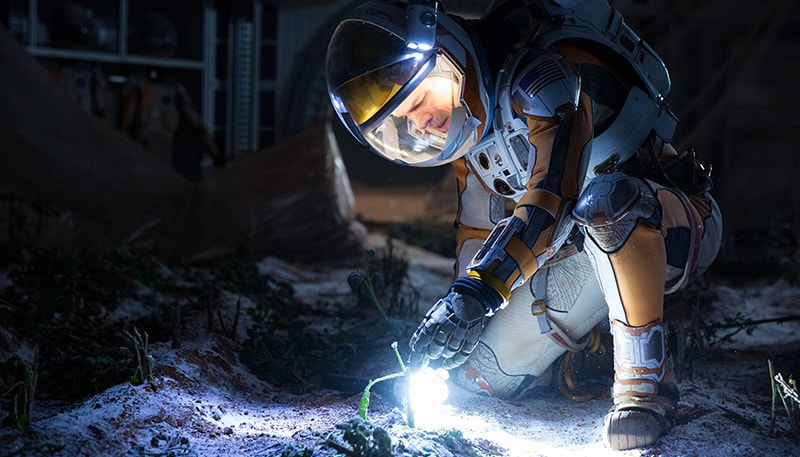 The majority of The Martian was shot in a green screen studio in Budapest, while desert locations in Jordan, notably Wadi Rum, stood in for the landscape of Mars. Principal photography involved shooting in stereo 3D with 11 RED cameras, including Epic Dragons and Scarlet Dragons, which generated between 100 and 200 terabytes of raw files. In addition, more than a dozen GoPro Hero4 cameras were dotted around the ‘hab’ (the Martian structure that Damon’s character lives in) and surrounding areas.

Scalia’s team started editing during the shoot in Budapest, editing right behind the camera. When production moved to Jordan, the team split up into three teams in three different locations. Eventually the whole team moved to London where they could work very closely with the visual effects and sound teams to meet an accelerated schedule to finish the film.

To help manage the huge amount of footage and tight schedule, and collaborate with members of the production and editing teams in different locations, Scalia turned to Avid Artist and Storage Suite solutions.

"When you have that many cameras and rigs it gets complicated, but my assistants and the rest of the editorial and technical team, from the visual effects editor to the crew, made it possible for me to start editing right away. They were sorting and preparing vast amounts of data and material daily.”

“I use the same crew and assistants who know how I work, but in the end, we had close to 250 hours of footage, per eye, and another 60 to 70 hours of GoPro footage,” he adds. “We had about 32 terabytes of offline-quality Avid media and almost 200 terabytes of raw files from the 3D RED Dragon cameras shooting 6K. All of that was ingested into ISIS.”

The organizational capability of Media Composer is very useful as well as all the tools, the simple visual effects and comps that we can do...it's a very versatile tool.

Like Prometheus, The Martian was not only shot in 3D, but cut in 3D as well, and the editing team fully exploited Media Composer’s extensive 3D capabilities. “While both Prometheus and The Martian were cut in 3D, we were able to cut The Martian in dual mode—so each eye is a discrete file—whereas with Prometheus we were only able to cut in side-by-side mode,” explains Scalia. “Dual eye gives much higher image quality and Media Composer’s suite of effects for 3D has grown a lot since Prometheus, making it much easier to work in 3D now.”

Scalia continues, “When you edit in 3D, the eye just needs a little bit more time to rest in space, and that affects the choices you make and the shots you take. You can't do really frenetic cutting or lateral movements. There can be certain things in the foreground that hurt the eye in 3D.” 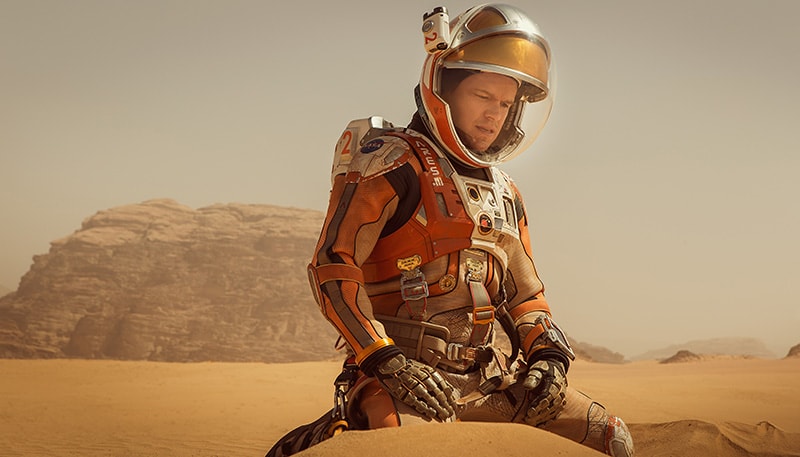 When production switched to Jordan in March, the editorial crew split up into several teams. A set of assistant editors went on location in Wadi Rum while another team went to London to work efficiently with all the visual effects studios working on the film. Scalia and several assistants went to Provence and set up in a spacious farm house near where Ridley Scott lives.

"We were all working on the same material and only reassembled all together in London once we finished our director's cut," says Scalia. "But moving all the equipment to different edit rooms during production, and the logistics involved, was challenging. I couldn't do any of it without such a great support system and having the assistants manage the storage in the ISIS and just keep track of it all as it came in."

“I'm very comfortable with Avid Media Composer,” adds Scalia. “I wish I was technically more prolific and used all of the bells and whistles that it has, but what is fundamental for me is the organizational structure of the material, how I ask my assistants to bring in the material and how we keep track of that. It starts with the folders and bins: dailies, stock footage, music, VFX, library—everything is in there and we carry this system from one movie to the next.”

It’s very important to Scalia to track the history of his cuts. “I know what I did in this cut or that cut, simply by the naming of it,” he explains. “It's a gradual evolution and progression of cuts. The hierarchy is that I’ll work in one cut and then, if I need assistants to work on it, they can take the cut, do sound or visual effects work, and comp it. Then it comes back to me. It gets reviewed by me and Ridley and we put it back in the reel. The organizational capability of Media Composer is very useful as well as all the tools, the simple visual effects and comps that we can do...it's a very versatile tool.”

I couldn't do any of it without such a great support system and having the assistants manage the storage in the ISIS and just keep track of it all as it came in.

Shooting was completed in 74 days, “which is very, very quick considering the scope of the film,” reveals Scalia. “The film came together quickly in terms of story. When we showed it to the studio, the film was in pretty good shape. The first assembly was a three-hour cut, but when we screened it for the studio it was already screening at 2:25. We didn’t need a lot of fat, we just focused on story and character, so during the editing process we realized we had to lose certain scenes and we had to do some restructuring, specifically in the first act, like moving the flashback to the beginning of the film.”

After seeing the first cut, the studio execs loved it and asked if it could be finished early—by seven weeks. Luckily the visual effects studios agreed on the compressed timeframe, but this didn’t lessen the pressure on the editor and his team.

“We worked six and seven days a week for a long time,” says Scalia. “At the same time, I had my sound team starting to work on scenes for the temp mix, which we would carry throughout the process of previews and changes, all the way through pre-dubs and the final mix. VFX shots would come in, be updated, and the sound department would be notified. Everybody was working together to make this happen, and it all came together miraculously well.” 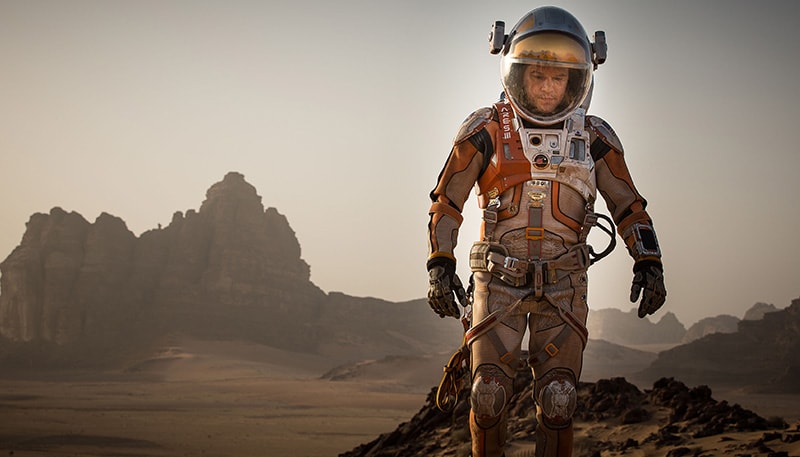 Scalia says the last act of the film was the most difficult to assemble, in part because it was long and contained many complex shots. "There are a lot of visual effects and animation elements in those final scenes," he explains. "We worked with previz and stunts and wires to visualize the shots, but had to keep the tension high and everything tight. It took a very long time to get where we ended up."

The narrative of this scene was built in three major ‘locations’—at NASA mission control, in the interplanetary spacecraft Hermes, and on Mars. Scalia worked with the footage as it came in—in pieces.

“For example, I worked on the NASA parts with the actors reacting to some previs material that was shot to describe the action, so they were just reacting to figures, animations and temporary dialog,” he explains. “Then, when the Hermes crew was shot, I started incorporating that. Then Mark Watney was shot, reacting to the Hermes dialog. So it was a case of putting all the pieces together.”

“It was a pleasure to put it together because of the multiple cameras that Ridley shot on,” continues Scalia. “I could choose which angle I wanted to use. For example, I would balance the cut on Mark back and forth by composition, size, and movement of cameras. You see links and connections that aren’t evident as part of the storytelling. It’s the kind of visual, cinematic language that helps make things flow and connect on a more subliminal level. That’s the beauty of having the craft of editing to do that; it’s not noticeable, but you feel it.”

“We actually had a few days of reshoots where we went back and shot inserts of grasping hands and the tether in various stages of success,” he adds. “Recomping that new footage with effects and bringing it into the edit was extremely labor intensive. Yet it works on an emotional level, and it also keeps the tension high. I'm really happy with the way it turned out.”

The Martian is “a really gorgeous film and needs to be seen on a big screen," concludes Scalia. His description of his favorite part of the film, when Watney leaves the Hab and travels across Mars, could be applied to the whole production, “It's just such a beautiful set of scenes on an epic scale," he says. 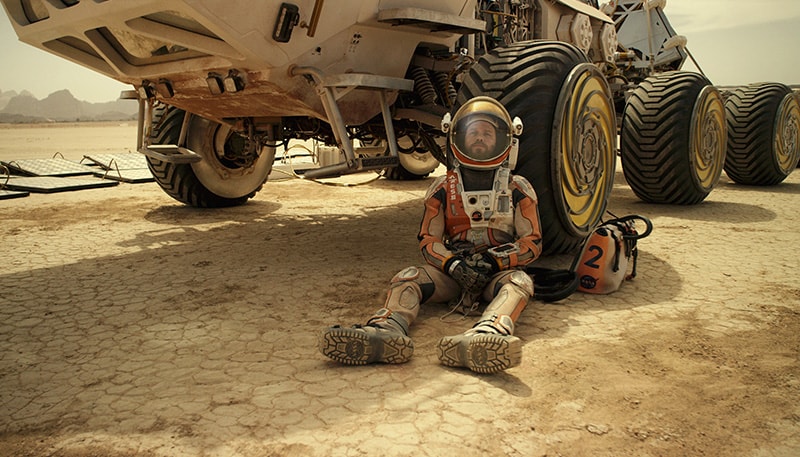