Tom and Sawyer in the City

"Tom and Sawyer in the City"
Opening Summer 2021
https://machitom.jp/ 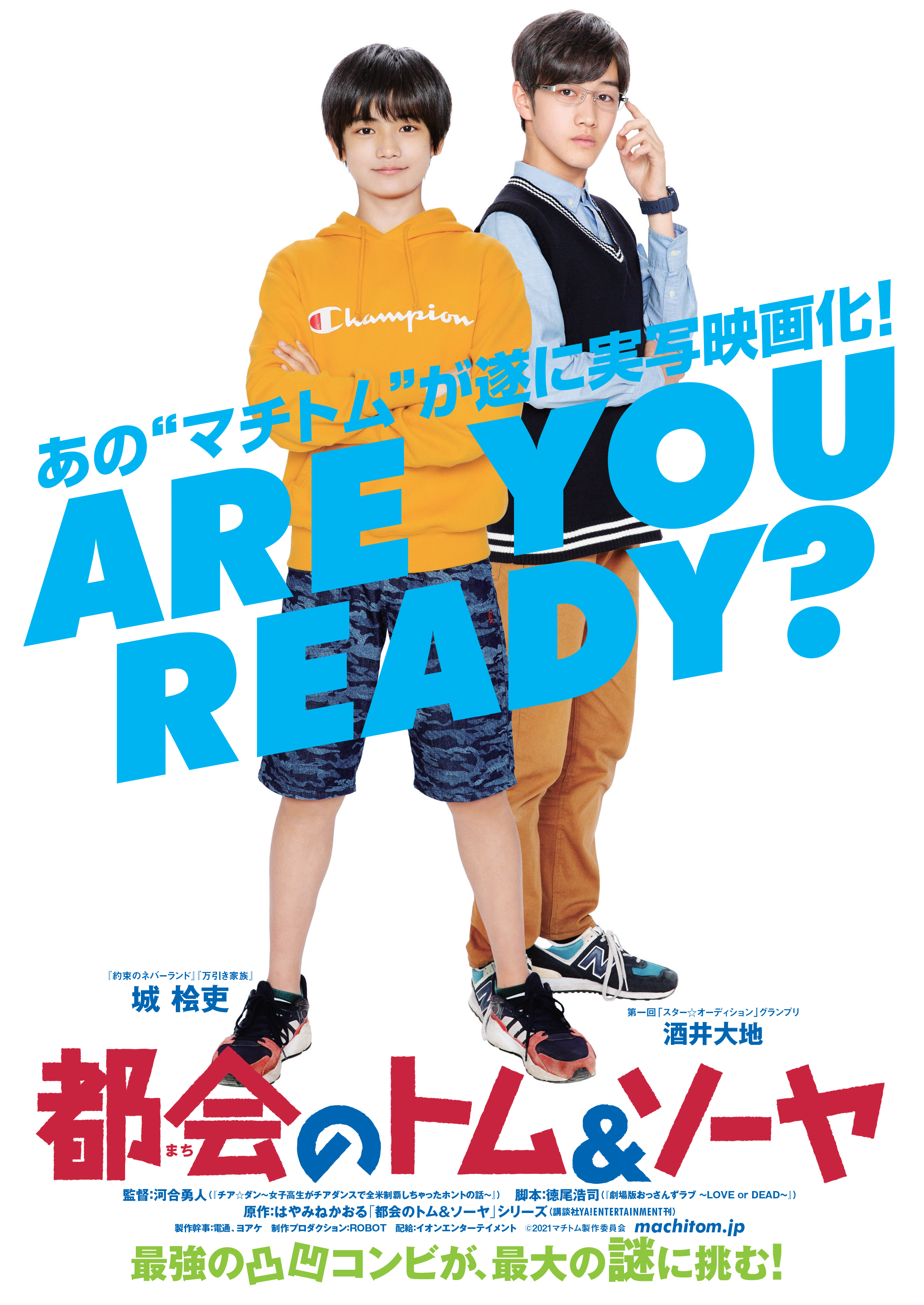 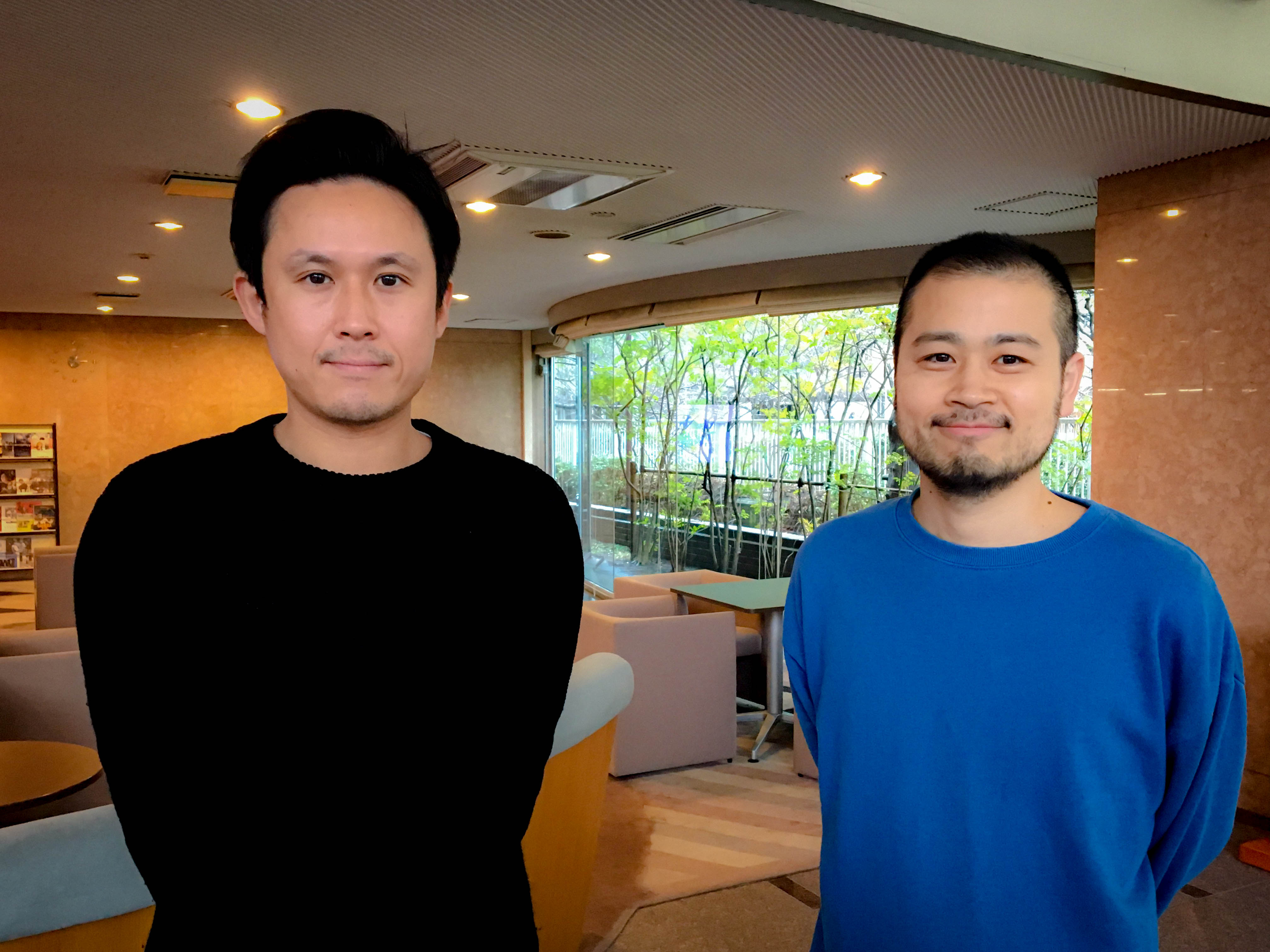 In the modern world of film production, cutting-edge technologies merge with over hundreds of years of tradition in a unique marriage of the past and present. Even when using the latest filmmaking technologies, terms and techniques which have been used since the dawn of the medium are still commonplace. This holds true for editing, where film was once literally cut and then spliced with tape. As editing system manufacturers strive to implement the latest technology for creating breathtaking films, their processes and methods are still grounded in this simple approach and are ultimately in the hands of the editor.

As one of Japan's major post-production houses, Imagica Entertainment Media Services has been a pioneer in film post-production workflow innovation who has continuously changed with the times. Mitsuo Nishio, an editor at Imagica, pursues such new approaches on a daily basis as he works on various projects.

One area he has recently developed an interest in is working with cloud solutions. It was no surprise, then, that this interest led him to the Avid | Edit On Demand SaaS cloud editing package, which brings together Media Composer and Avid NEXIS and is built on the Microsoft Azure cloud infrastructure.

"I was hearing about Avid | Edit On Demand at seminars and events, and I found it intriguing," explains Nishio. 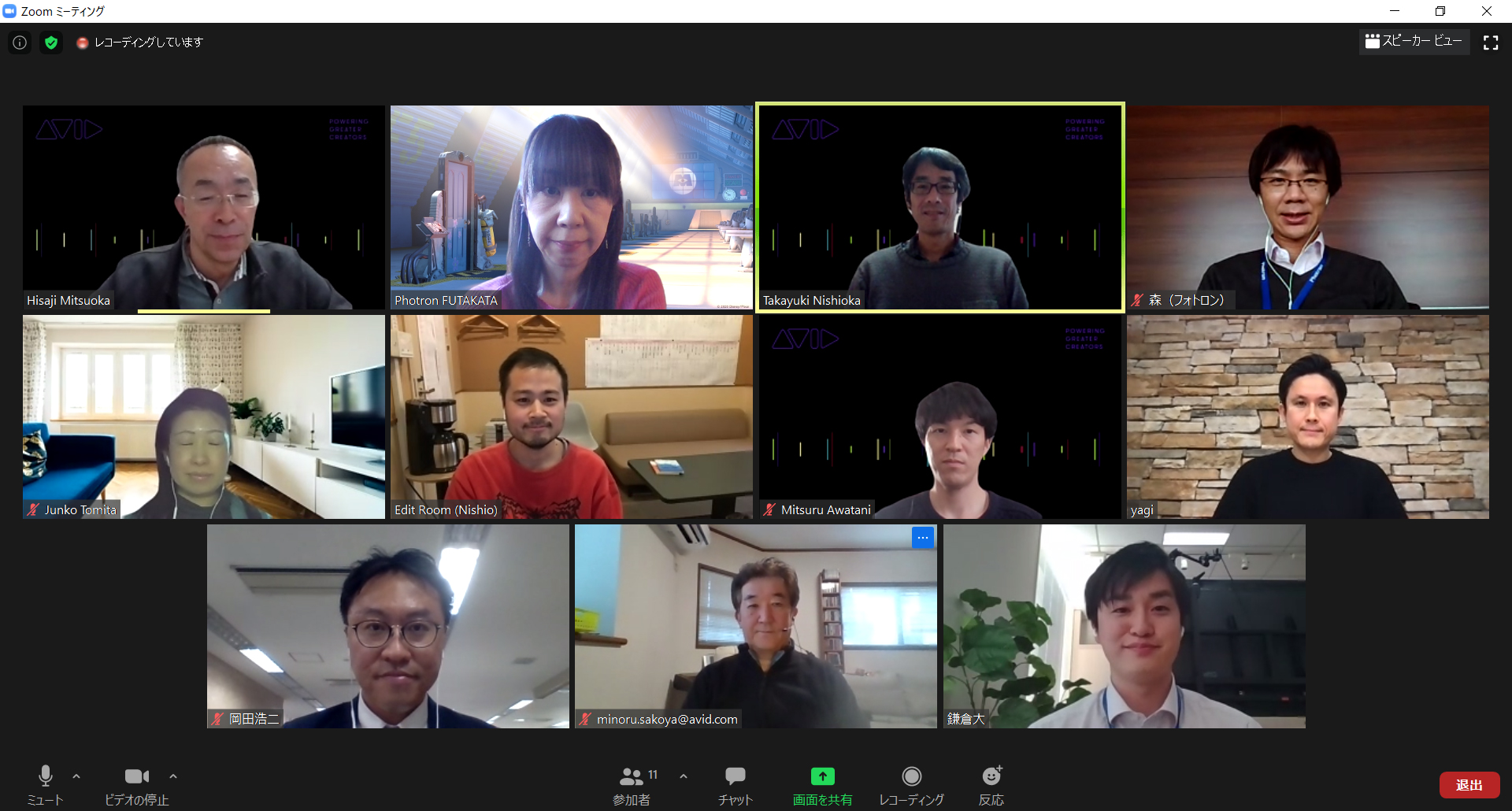 See how Avid | Edit On Demand can benefit your business.

A film adaptation of the popular children's book series "Tom and Sawyer in the City" was scheduled for release in July of 2020 and had begun shooting in March of that year. However, production was temporarily suspended due to the coronavirus outbreak, but the crew were able to resume shooting in October, later that year.

"While it may sound strange, these circumstances were the perfect chance to put Avid | Edit On Demand to the test. I had already been thinking about how Avid | Edit On Demand could benefit our work. I knew it provided a seamless workspace that could reduce offsite editing suite costs, and that it allowed multiple teams to work on the same project simultaneously, no matter where they actually were, which can save time and labor," Nishio recalls.

"For this project, since we were likely to be working on other content along with the feature film, we established two editing system lines, run by two main editors and one assistant. However, given the situation at that time, we couldn't have three people working together in the same place for long periods of time. So, we went looking for a way to enable our three people to effectively work on the data while being completely remote, and far away from each other. It was then that I realized I could try using Avid | Edit On Demand to address this very issue."

"We were talking about how we would be able to gather and check edits together with the coronavirus pandemic still underway. While it was our first time working with the technology and we were unsure how it would go, we needed to produce multiple projects at once, so we tried it out with hopes of increasing our work efficiency," explains Yagi.

Nishio consulted with partner company, Photron, on how to deploy Avid | Edit On Demand, and in October 2020, they determined their ideal specifications. By November, the license was added to their Avid Master Account, and they began implementing it into their workflow soon after. 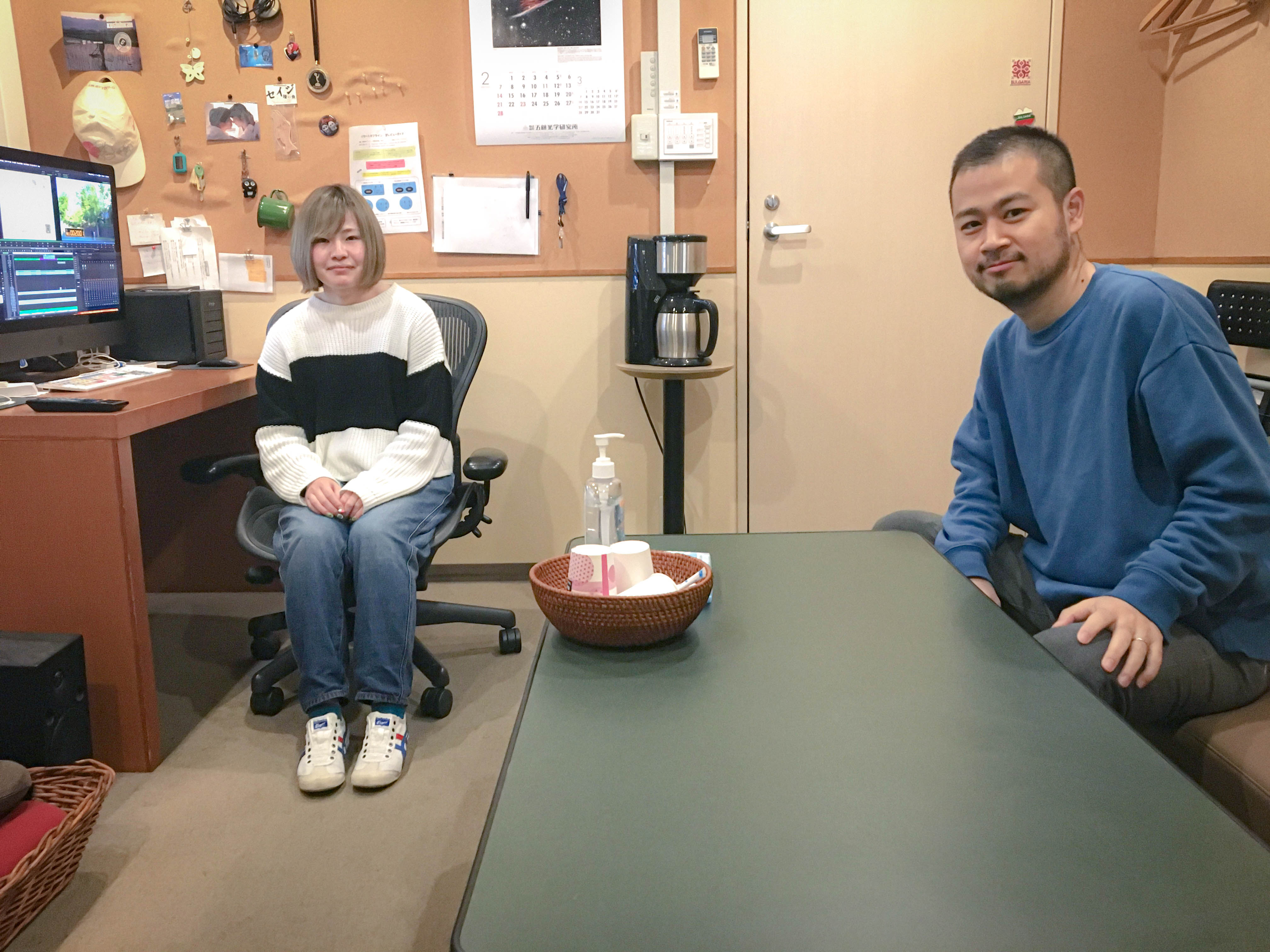 Sharing and Communicating Through Zoom

For shooting, they used an AVC-I Vlog 4K, and converted all shooting elements to Avid | DNxHD 36 offline resolution. Then, Imagica's ingest team delivered it to the editing team using their CONEPIA in-house media distribution system, and after that, the editing assistant organized the data and transferred it to Avid NEXIS for use with Avid | Edit On Demand.

"We wanted to establish two full editing lines for our work with both on-premises and cloud storage fully available for our needs. In the Avid | Edit On Demand system we used for the project, we had one instance of Media Composer running with 1 TB of Avid NEXIS storage, but since we basically had only one camera's worth of footage, the total size of the offline media in DNxHD 36 came to just 900 GB," Nishio explains.

They were able to divide their assets between the on-premises and cloud systems according to the production content and required workflow.

"As there were several directors working on different pieces of content, some came to the editing room for checks, while others performed checks remotely. For the remote work, we would use Zoom to show previews to producers or check with directors," Nishio explains.

To show previews using Avid | Edit On Demand, a full-screen playback in Media Composer would be shared to the monitor of the client over a Zoom connection as they discussed the content. 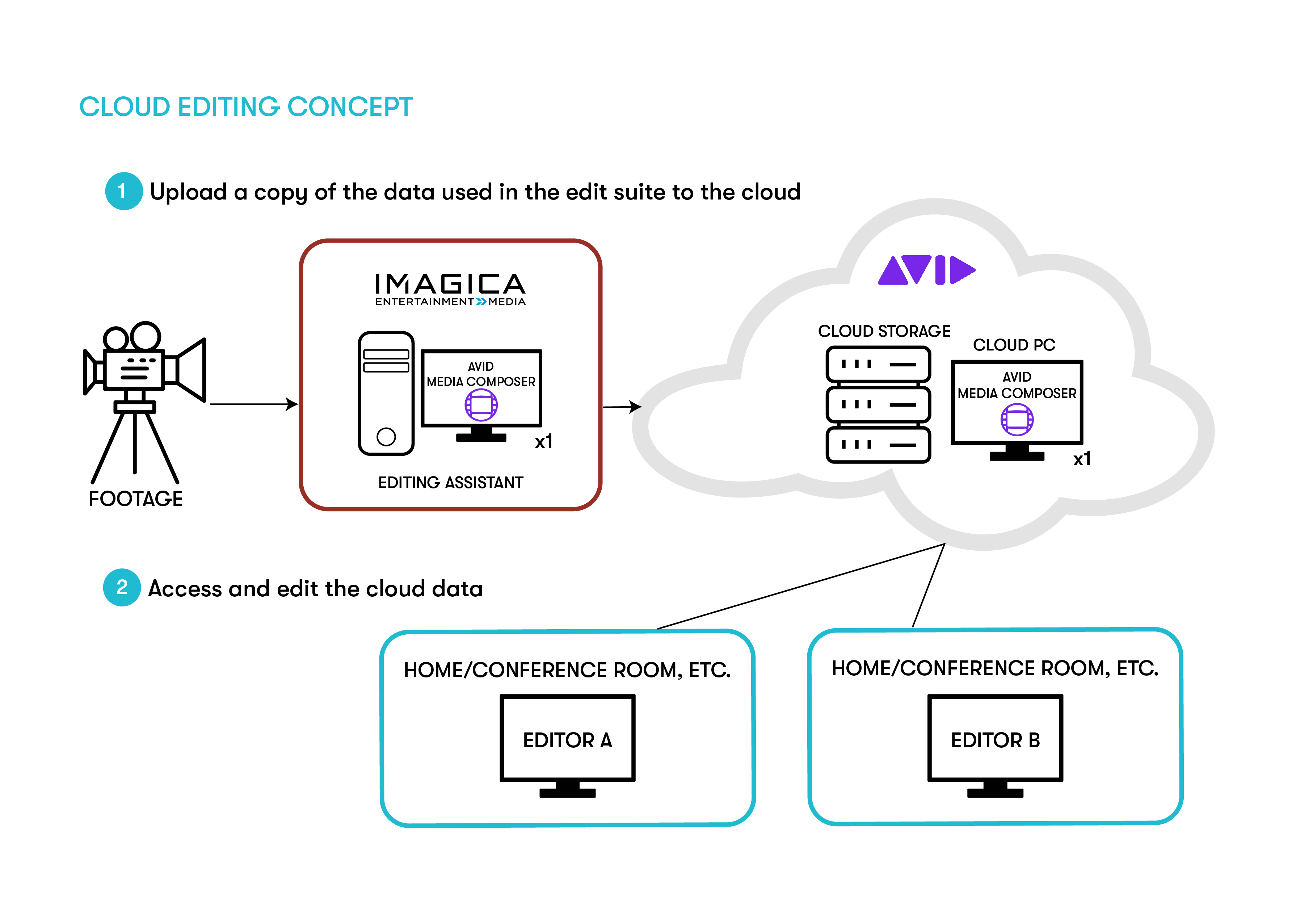 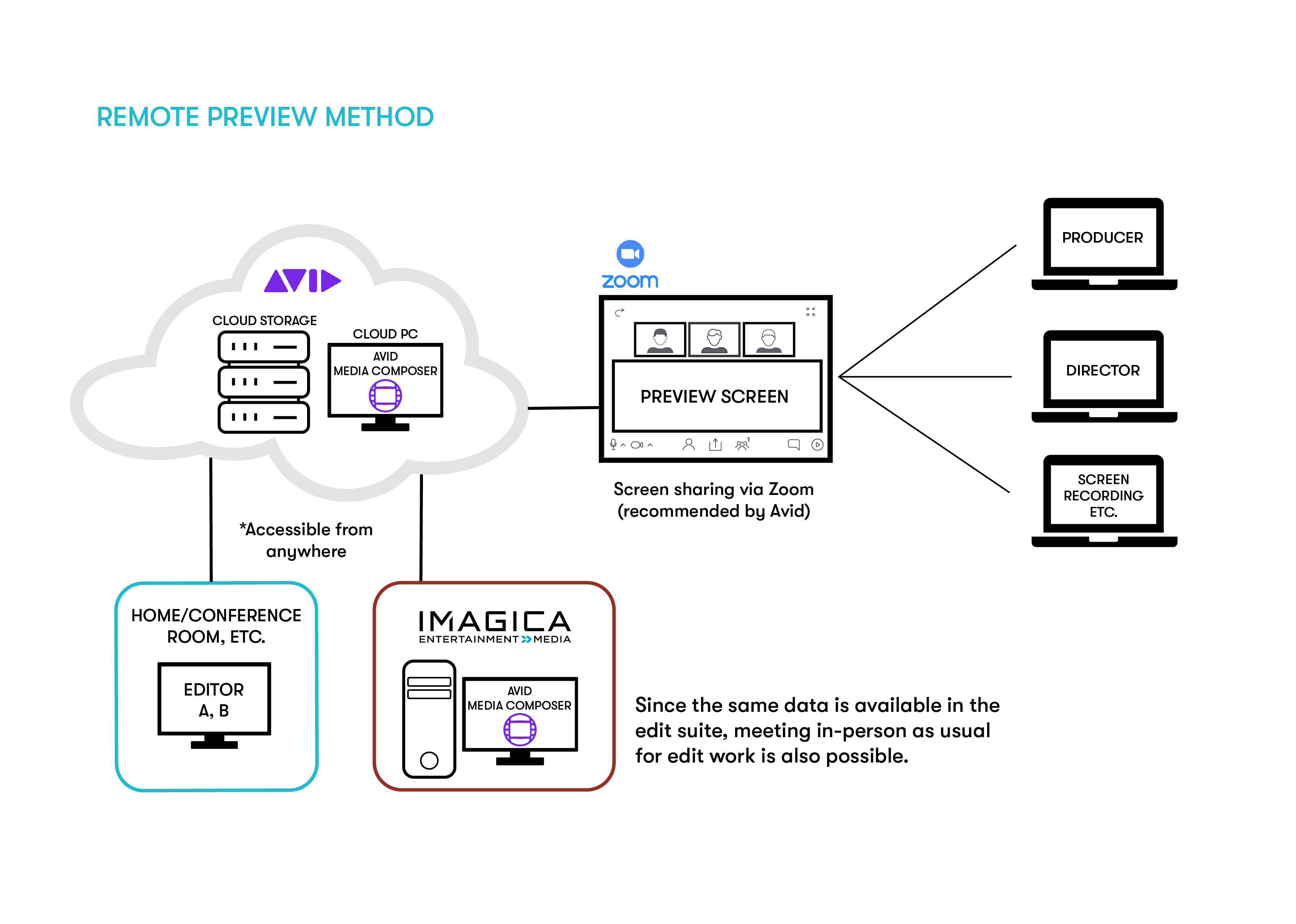 "Avid | Edit On Demand can access the local machine's microphone input, so the same Zoom call could be used to share images and communicate simultaneously. I remember one director telling us it was a really good setup for them."

Yagi was also able to try the remote preview setup.

"I had expected the playback would be jumpy or frames would tear, but there were no visual quality problems whatsoever—even when connected over my home's Wi-Fi," says Yagi. 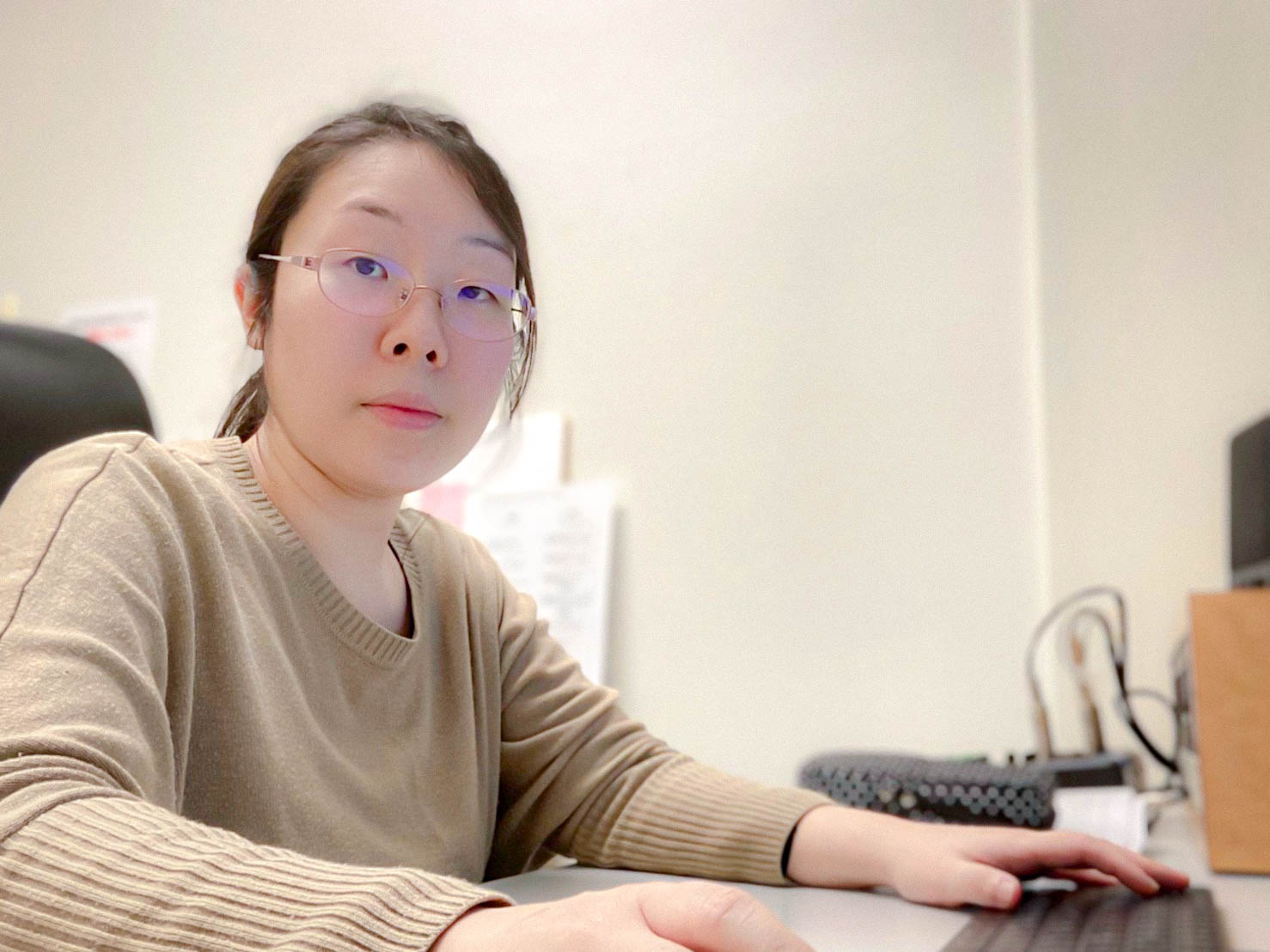 Nishio says working with Avid | Edit On Demand for the first time was a stress-free experience. He also felt that the immediacy of being able to work remotely reduced work and scheduled hours overall.

"When I had tried other cloud editing systems, there were problems such as delayed response and desynced audio, making them difficult to use for actual work. But Avid | Edit On Demand was a different story. When working from home, there was no audio desync, and the response during frame stepping and other editing work was really good. Actually, during a remote preview, I switched from our on-premises data to the Avid | Edit On Demand system, and the director didn't even notice anything had changed," Nishio recalls with a laugh.

"Until now, when we couldn't meet in person for a preview, we would send QuickTime data for the other party to check, and then have a meeting about it at a later date. But with Avid | Edit On Demand, you don't have to be in the edit suite to view the work in real-time. I think it's a great way to get direct feedback, given the challenges we are facing. Even after the coronavirus becomes less of a problem and we can gather in person again, this will remain a great solution for when people are busy and cannot come to us. I think it will actually make it easier for everyone to do their respective jobs," Yagi says.

"When editing offline, storage becomes an issue—it is difficult to add more and more Avid NEXIS units. But it's great that now, we can use cloud storage to temporarily increase our Avid NEXIS capacity. This means we can work faster and reduce overhead, while still outputting the same high quality. And being able to work remotely means we can access the data anytime, so when something hits me, I can try it out right away from home. This system will also be great when working far from the office—from rural areas to even overseas. It feels like an age of new possibilities," says Nishio.

He has worked on films such as "The Sun Does Not Move" (directed by Eiichiro Hasumi), released on March 5, 2021, as well as the following: