Create surprising, dynamic and attractive graphics for election coverage, while ensuring the information was accurate and easy to understand.

Place Avid Everywhere as the foundation for the workflow via the Avid Graphics suite, combining virtual studio, augmented reality and tracking solutions.

With headquarters in Barcelona, Televisió de Catalunya is Catalonia’s public broadcasting network and TV3 is its flagship channel. Since its launch in 1983, TV3 has built a solid reputation throughout Spain as a station that prioritises technological innovation and embraces new and pioneering developments in audiovisual production, technology and design. Its high-quality programming has made it a firm favorite among TV audiences. Televisió de Catalunya has also garnered international recognition for the quality of its programmes over the years, and today boasts five channels and employs around 2,000 people.

TV3 has been working with virtual sets for more than 15 years, most notably for its election programmes. The network has always believed that it can innovate and astonish without sacrificing its focus on information. With this in mind, they launched an ambitious design plan for the 2015 election season, with striking and dynamic staging created using the ProSet virtual studio solution, RealSet 3D graphics workflow and Xync infrared camera tool from the Avid Graphics suite. In postproduction, TV3 has always used Avid Media Composer and Avid Pro Tools for video and audio editing, underlining its commitment to the Avid Everywhere approach.

On the first election night in May 2015, the graphics team used the virtual mapping capability within RealSet to enable audiences to instantly view both the election information and the presenters outside the various town halls. TV3 used this virtual mapping to keep audiences informed about the elections in the four main municipalities in Catalonia by projecting an image of the future mayor onto the facade of each town hall, and gradually tinting it with the colour of the winning party. They were also able to provide a range of other data and information, including the number of councillors, voter turnout and even the number of votes counted.

In addition, the two presenters each had their own set featuring an interactive virtual map. These maps displayed the 974 Catalan municipalities that changed color in real time to that of the winning party. 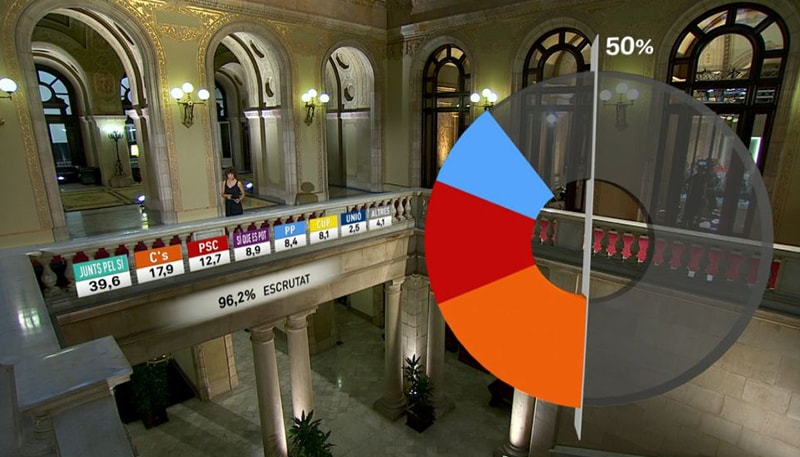 The graphics unit used ten HDVG+ rendering stations: five for the cameras that applied the augmented reality live, three were used for the information displayed as augmented reality in full screen mode, and two as backup stations. Full screen mode was used to display graphics during live broadcasts, but also to allow the presenters to check on their iPads or monitors to see which virtual graphics they were referring to.

Each set was able to work independently, and the graphics were controlled from on-set; one person was responsible for creating the computer graphics, while an editor tested and delivered them, and provided support to the presenters. This solution enabled us to test specific set-ups while the programme was broadcasting live with other presenters, and to simultaneously see how it appeared virtually with the live feed.

The purpose of the September elections was to select the members of parliament, but there was another key point of interest: whether independence candidates would receive more than 50% of the votes. Since this added another layer of information and possible complication, the decision was made to create an additional set on the ornate staircase in the Catalonian Parliament.

In order to do this, a seven-meter crane was installed on rails on the staircase, fitted with a telescopic hot head camera as well as the Stype Grip system, which enabled it to take tracking shots. This system continuously supplied real-time information about the camera position, zoom aperture and focus, so that the HDVG+ render engine working with the camera could position any graphic in relation to its reference points and within the desired space.

The graphics for this set appeared in a number of different formats: from standard 3D bar graphs, to a multi-coloured ring, to a purely graphic representation of the parliamentary chamber. There were also two types of screen: a semi-transparent one, to which images or post-production elements could be added, and a larger one, on which live two-way communications could be carried out.

In addition, TV3 was able to animate the show logo as a 3D object on the staircase or the roof light above. These dramatic solutions were used when cutting to or returning from commercial breaks. 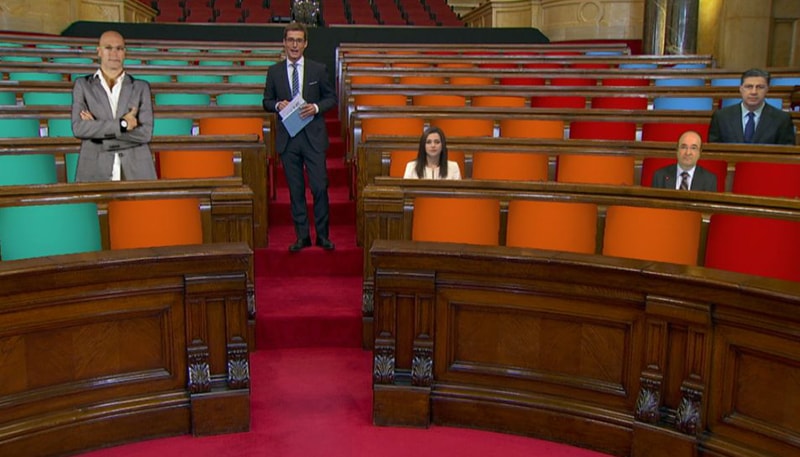 The groundbreaking aspect of this broadcast was the use of dual chroma keying within the HDVG+ render engine. TV3 was able to project the results onto the parliamentary chamber, seat by seat, automatically updating the seat colours updated as the count progressed. The presenter was also able to move around freely, focusing on conveying the information instead of worrying about where they could or couldn’t walk: gone was the issue of stepping on colour overlays, which were now perfectly integrated. 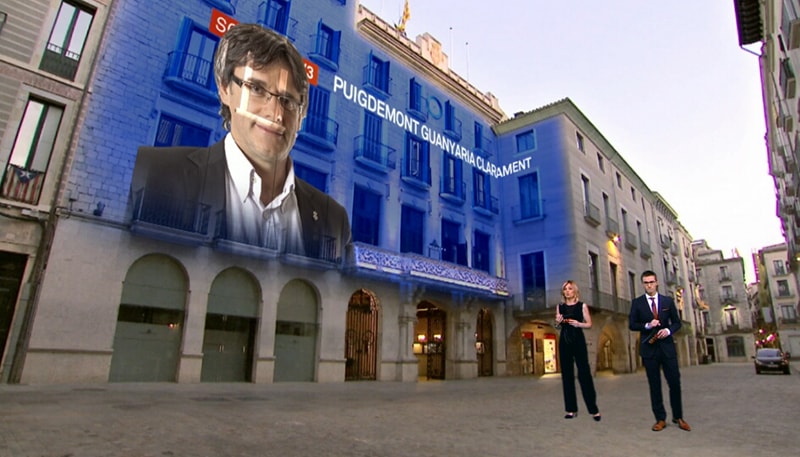 However, the big surprise for viewers came at the start of the program, when the presenter showed the seven leaders of the electoral lists sitting together in the centre of the parliamentary chamber. They were ‘alive’; they interacted with one another, moved, and engaged with the presenter’s discussion. A producer, a programmer and a computer graphics specialist created these virtual members of parliament and positioned them virtually within the parliamentary chamber.

TV3 came up with another idea that represented one of the biggest challenges of this year’s elections: to film the 50 frontrunners in each electoral area sitting down and standing up in front of a green screen, to be embedded later into the real image of the parliamentary chamber. The additional 200 seats were occupied by anonymous TV3 staff members, who were chosen to match the profile of the relevant candidate. This footage then underwent cartoon-type image processing, to add the basic features of each candidate. These images started out grey, so that they could then be changed to the relevant party’s colour as the results came in.

The groundbreaking aspect of this broadcast was the use of dual chroma keying within the HDVG+ render engine. We were able to project the results onto the parliamentary chamber, seat by seat, automatically updating the seat colours updated as the count progressed.


Another key factor in the success of the electoral program was the use of overlaying. Throughout the show, the virtual graphics in both of the Parliament sets were overlaid with captions featuring graphic legends, coloured maps, newspaper headlines about the results and their possible interpretations, and a results scoreboard, which warned viewers, both visually and aurally, when it was about to update. 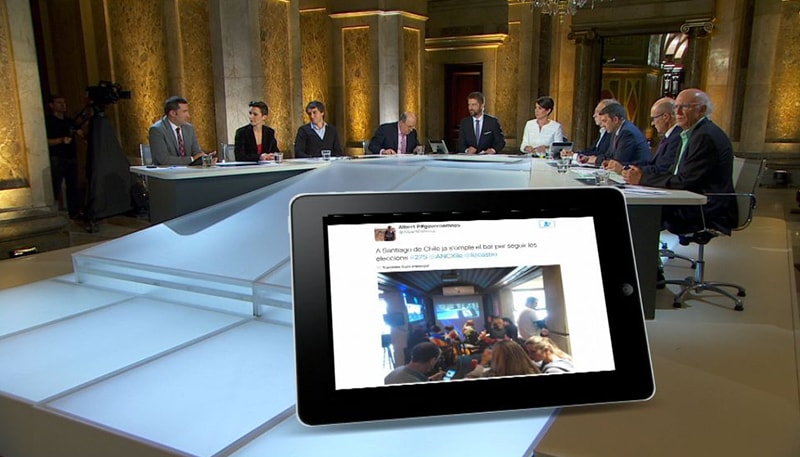 Coverage that stands out from the crowd

The 2015 elections were hugely important, both for Catalonia and for Spain as a whole. By using the latest technological innovations to enhance the clarity and accuracy of the news, TV3 not only won the ratings battle in Catalonia, but became the gold standard for electoral programming in both Spanish and European television, with a nomination for the European TVB Awards that celebrate innovation in television.