Find a flexible and cost-effective live system that could meet the demands of diverse events and performances.

Located in the Rogers Building on the vast corporate campus of Canadian media conglomerate Rogers Communications in Toronto, Canada, the Velma Rogers Graham Theatre is a private 225-seat venue that plays host to everything from corporate meetings and custom webcasts to music concerts, TV shows and film screenings. As a concert venue, the theater has hosted performances by artists like Ed Sheeran, Ellie Goulding, Michael Bublé, Harry Connick Jr, Hedley, and Florida Georgia Line. And while also serving as a corporate venue for Rogers Communications—whose businesses span cable and wireless communications, broadcasting and publishing—the demands on the theatre's audio team are diverse, and often unexpected.

Having a system with everything we require means we’re able to provide a high level of service without expecting people to pay for extras.

Rogers Communications’ audio visual national manager, Marcus Vichert, has a core group of talented audio engineers—Alan Elliot, Ryan McCambridge and Steve Morrison—to help him manage the theatre’s diverse audio requirements. “One of the things that’s unique about this work environment is the expectation of flexibility,” says McCambridge, producer and audio engineer. “We could have Hedley come in with an entire arena set up and then the next day have someone who wants to put on a TV show. It really is a unique environment because there’s so much diversity in the work we do, and we need flexible tools to cater to all of that.”

A head start with VENUE and Pro Tools

To help them overcome the challenges that such a diverse and popular venue brings, the team decided to embrace Avid Everywhere and invest in an integrated workflow powered by the Avid MediaCentral platform, with live sound and recording solutions from the Avid Artist Suite. They chose Avid VENUE | S3L-X systems to deliver a compact, cost-effective solution with the flexibility of seamless Pro Tools integration.

“VENUE software is used all over the world, so visiting engineers can create a show file beforehand and bring it in,” says Elliot. “The first show we did with the VENUE S3L-X was with Florida Georgia Line. Those guys are used to the big venues, but they just said, ‘This is all familiar to us’.” 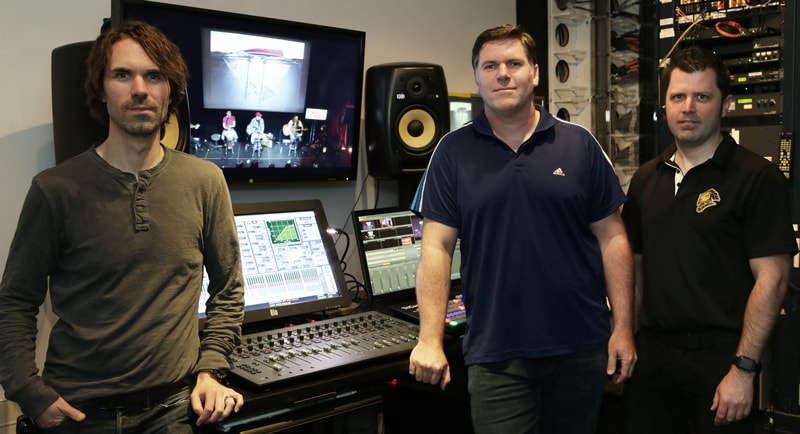 The team’s own familiarity with Avid solutions enabled them to transition seamlessly to S3L-X. “We have such a long-standing relationship with Pro Tools, which made for an easy transition. It wasn’t like learning a whole new architecture,” says McCambridge. “And VENUE is really intuitive. The day we opened it we literally just started poking at it and it all made sense. We didn’t have to look up anything.”

The team invested in two Avid VENUE | S3L-X systems to cater to their unique set up which splits up whatever comes off stage into four separate mixes: monitors, front of house, a two-mix to radio, and Pro Tools for multi-track recording. According to Elliot the new workflow enables each team member to do more than they ever have before.

“If you think of being able to do a broadcast mix and a multi-track recording at the same time, that’s like two people’s jobs in one,” he explains. “It’s not so much that you need less staff, but that you’re able to use your resources better. In a concert show, if I’m doing front of house, Ryan’s doing the broadcast mix and the multi-track, and Steve’s on the lights, it gives us plenty of flexibility. It makes everyone’s time more effective.”

The one thing S3L-X has given us is a system that functionally exceeds its value.

Elliot also praises S3L-X for improving the team’s efficiency and delivering everything they need in one box: “S3L-X simplifies the set up, reduces set up time, removes the need to rent extra equipment, reduces potential points of failure and improves sound quality,” he says. “We were having to rent external processing equipment before, in addition to what we had, and now we’ve got graphic equalizers and dynamics processors built in, as well as the ability to add and run high-quality 64-bit AAX DSP plugins.”

“It’s got the flexibility to easily add external processors, but really it’s all there in the box,” continues Elliot. “Having a system with everything we require means we’re able to provide a high level of service without expecting people to pay for extras.”

According to McCambridge, S3L-X also gives the team the flexibility to be more inventive. “On the last event we did, Alan was mixing front of house and I was mixing to radio. I loved the flexibility of the routing and being able to be creative outside of the limited processing equipment we had before. I could bring up delays, and Alan had the flexibility to create a session just for that type of event. We couldn’t do any of that before. It makes our jobs more enjoyable”

With the wide variety of shows that the theatre hosts, one of S3L-X’s most valuable features is its recall ability. “Being able to have different sessions set up and instantly recalled really fits the changing events we have day to day,” says McCambridge.

In the past, the team would have to repatch their entire control room system to create a broadcast mix. “Now we can plan ahead and build a custom session file and load it up on the day. It’s just like a snap of the fingers,” adds Elliot.

The feature also proved invaluable for a weekly webcast series. “I could trust that just by loading up the custom session file, it would be exactly the way it was the previous week,” says McCambridge. “To have to think through the routing every time would have been such a waste of time.”

The theatre’s webcasts have grown exponentially over the past few years, and S3L-X enables them to reach a larger audience with a smaller team. According to Vichert, a webcast would have an audience of about 200 people in the past, but now the potential audience is limitless.

“There’s an expectation for quick turnaround, obviously, but also that you can deliver something out of this theatre to a lot of people,” says Vichert. “In the past, the impact of something going wrong would be felt by a couple hundred people. But now, what would once have been the work of 10 people is done by three, and the audience can be 10 or 20 times what it was before.”

Another feature the team has used extensively is Virtual Soundcheck. “It’s really helpful given the fact that we have such a limited amount of time beforehand with the band,” says McCambridge. “With Virtual Soundcheck we can refine the show before it starts instead of on the fly.”

For Elliot, it’s the custom fader layouts that make the difference. “Right now we have things on multiple pages. Even though we’ve tried to bring it down as much as possible, you’re still jumping between pages sometimes. With the custom layers you can just pull today’s show into one layer so it’s a lot more manageable. The ability to get things to hand when you’re doing two things is one feature that helps day to day.”

“The one thing S3L-X has given us is a system that functionally exceeds its value,” says McCambridge. “To get that functionality five years ago would have cost five times as much. We always seemed to have a finite capacity that was always pushed to its limits. With the Avid system we’ve yet to actually hit its limits. Expectations are always growing. And as the audience grows, we can grow with it.”

The team also praise the level of support they receive from Avid. “We’re not particularly high-profile,” explains Elliot. “We were one of the first to get the system in North America, but we’re not like the Bryan Adams tour. We’re small players in that regard, and it’s nice to see that they’ve got our backs.”

“To have a company that will support you on a critical show is huge—that goes a long way,” concludes McCambridge.