Deliver a musical production with a large ensemble for live performance.

Wayne's original score was handwritten, but he notes, "I've had Sibelius since it came out and it has remained the program I work with ever since. I was trained to orchestrate by hand, but digital technology took over and made the process easier and faster." Each time Wayne redevelops the production, makes changes or adds new content to the story, music, orchestration, and sound design, Avid's Sibelius | Ultimate music notation software is at the heart of the process.

Wayne works with Sibelius | Ultimate to accomplish the work of writing, scoring, and publishing parts for musicians and performers. This is where key features of the digital technology make a big difference in the speed of creation. On the rehearsal stage for the touring shows, Wayne steps into the conductor's role, using Sibelius to edit the pieces as he needs to accommodate the ensemble and any changes that need to be made. "The music prep starts about 12 months before we go into rehearsals. I also always have one or two members of our studio team with me throughout rehearsals, because while the whole show will be ready by rehearsals, we can still use Sibelius | Ultimate to make changes and fix any mistakes that we may have missed during the prep period," explains Wayne. 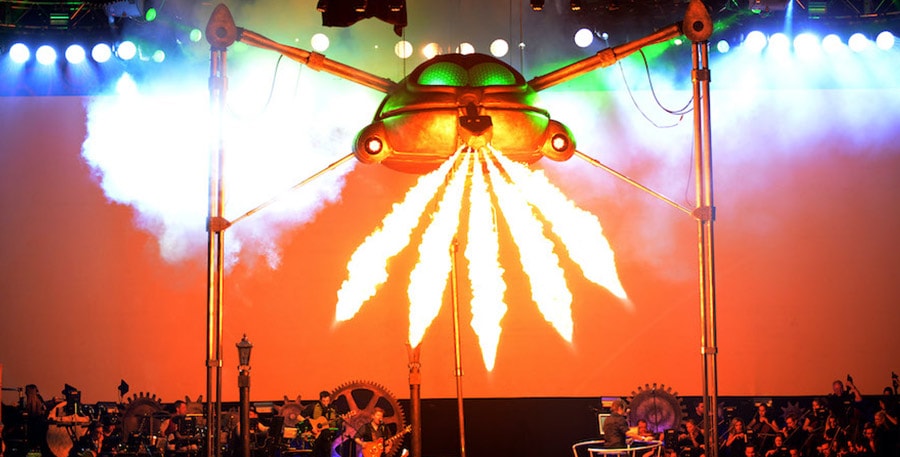 "I've conducted every arena tour since we began in 2006 on stage with a 9-member band, as many as 48 players in a symphonic string orchestra, and live performers. For our 2016 West End Season, we played 88 shows at London's famous Dominion Theatre. One major difference was that while the band size remained at nine, the symphonic string orchestra was re-scored for 13 players, all playing electronic strings."

Sibelius | Ultimate isn't the only technology used to drive Wayne's productions, though it plays an important part in the music creation and performance process.  For example, the musicians use A4 electronic readers called MusicPads. As Conductor, Wayne use an A3-size version, called the Maestro. Both the MusicPads and Maestro can be formatted in portrait or landscape, and each musician and the Conductor can choose their own preferences; individual annotations and markings and color coding can be customized. "Everything is generated first in Sibelius, and throughout the prep period my studio team and I collaborate with our music prep team using Google Docs. The last phase is to get it useable by converting from PDF into the MusicPad software."

By itself, the touring stage show is a massive operation, but Wayne's team hasn't stopped there. In November 2018, after a year spent prepping the arena tour and the day before the tour kicked off, Wayne also released a 10-episode, five-hour musical drama, based on The War of the Worlds. "It was an entirely different concept to my musical version, not just because of its substantially increased length from two to five hours, but because there was no singing included at all, it was all acting, music, and sound design. Quite an exciting challenge," exclaims Wayne.

Wayne notes that he was also very fortunate to work with wonderful actors. Michael Sheen was The Journalist, Ade Edmonson was the Astronomer, Theo James proved a brilliant foil to Michael's Journalist as the mad Parson Nathaniel, and Taron Egerton was The Artilleryman. The second 'Narrator' in the Audible production is the role of Carrie played by Anna-Marie Wayne, who has been in every production as that character since the arena tours started in 2006.

I've had Sibelius since it came out and it has remained the program I work with ever since. I was trained to orchestrate by hand, but digital technology took over and made the process easier and faster.

Pro Tools is the main engine for everything Wayne does in his studios. For The War of The Worlds they are using up to 256 tracks, making it a vast and challenging production.

Jeff Wayne's Musical Version of The War of The Worlds was ahead of its time when first released in 1978, though the instrument sounds and recording equipment used in the original give it a classic, 'vintage' feel that is increasingly sought after today, they still remain fresh in the way they sound.  "Around 1969 I purchased one of the first Moog IIIc's, and many other classic synths, like the Mini Moog, great for bass lines; ARP Odyssey, it could play two notes simultaneously; and our own company's synth, The Thunder Child. Then, about six months into the recording of the original The War of The Worlds sessions, the Yamaha CS-80 was launched. I purchased one of the very first. Today they're virtually all available as MIDI plugins and while they give you quite a range of sounds and they're easy to program, there's still something to say for the original analog instruments and the sounds they produced," adds Wayne.

"The War of The Worlds has had such a life and history and seems to have remained locked into peoples' minds, which has been so rewarding to have achieved, not that I knew it would have had such a life when I first composed, arranged, and produced it! But I've remained challenged with every new production by hopefully always adding new ideas that continue to keep it sounding fresh and new," concludes Wayne.