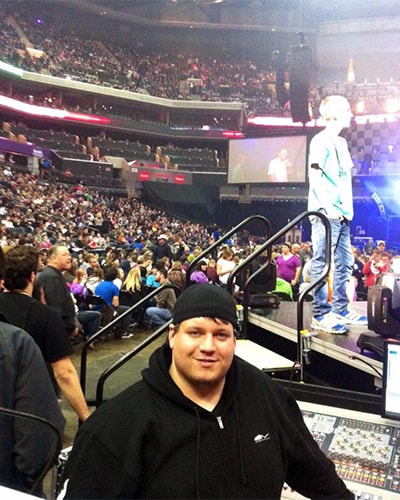 Since its inaugural run in 1995, Winter Jam has been one of the biggest and most entertaining annual tours for fans of Christian music. Featuring a diverse group of artists spanning a number of genres, from rock to pop to gospel, the tour features 10 acts with extremely short turnarounds—and a fervent fan base that wants to hear everything. Having the right technology and systems on hand to keep the show running smoothly is crucial to the tour’s success.

“We are doing a full arena in the round tour with a 9am load in and then doors at 3:30,” explains Ted Daniels, Front-of-House (FOH) tech for Blackhawk Audio. “It’s ready, set, go.”

Jamie Nixon, Blackhawk Audio’s director of touring and marketing, Jerry Holcombl the Winter Jam production manager and FOHengineer for six of the 10 bands on tour, and Ryan Lampa, the FOH engineer for TobyMac, met to talk about what audio mixing console would best fit the tour. With 10 bands on the bill, the tour needed an easy-to-use system that would be reliable on the road. It was also important to increase the speed of setup and sound check, leaving more time for creative decisions. Nixon says the choice to bring in a pair of Profile Systems for FOH and monitor positions was immediate.

“As we do with all tours, we wanted to make sure that everything our clients took out would mesh really well,” Nixon says. “Most tours start with figuring out what PA is going to be hung, but this one started by picking the Profiles. Ryan had been out with a pair of [Avid VENUE | SC48s] from us, and Jerry had been using Avid consoles for a while. We liked the way they sounded, how popular they are at festivals and on the road, and how easy they are to use. It’s a proven console—it’s not complicated and it does the job.”

Every time I step up to an Avid Profile I know it is going to be accurate.

For Holcomb, the 48-input Profile Systems were the ideal pick because he knew that many of the newer bands were going to be coming in with premade scenes and snapshots created in VENUE. Plus, the consoles have a smaller footprint to ease the space constraints at FOH—and they sounded great.

“I was able to come in with some basic mixes already done, and we got a lot of horsepower with the Profiles in a smaller footprint because we kept the rack up at monitor world,” he says. “We had bounced between another console and the Profile, and sonically the Profile sounds better.”

Building the perfect mix with VENUE

Justin Sumrall, FOH engineer, and production manager for Royal Tailor was just one of the mixers who took full advantage of building show files and snapshots in VENUE before joining the tour. “We did our tour prep at a rehearsal place in Nashville,” he says. “We used an SC48 to build the show files and snapshots, then once we got on the regular tour, I ran the files over to the Profile and they worked perfectly.”

On a day-to-day basis, Sumrall loves how easy it is to use the Profile. “I’m not fumbling around on the console, trying to find the plugins page or having to click here, click there, and shift over to a bunch of screens,” he explains. “Everything is within a click of a button away. It’s faster—in my opinion—than any analog desk with an outboard.”

While Royal Tailor isn’t a heavily affected band, Sumrall uses the Waves C6 Multiband Compressor on the lead vocal mic, the Avid Smack! compressor on the kick drum and bass, delays through Line 6 Echo Farm, and Antares Auto-Tune. “The singer likes to have a little-overdone Auto-Tune on the song Control, our final song of the night,” Sumrall explains. “Originally, we were looking at getting an outboard processor and then trying to figure out how to patch it in, but when we came into rehearsals, it was already there and that saved us many hours.”

Lampa is another engineer who has saved time, thanks to the layout of the Profile console. “After being on all the major consoles, the Profile is laid out how I want it to be laid out,” he says. “Everything is within arms reach and that makes it the most comfortable mixing experience for me. I definitely utilize the insert mode a ton. I like having physical knobs for my plugins, even if I’m not on that page.”

That’s important; Lampa is working with a 10-piece band and he’s not a “setup and let it run” engineer. “I don’t like to have too much automated stuff happening through the night, because it’s such a volatile world when you’re working with acoustic instruments,” he explains, “but I love that I’m one button away from the controls I need.”

Not only has the Profile System made this run a snap, Lampa believes working on the console has made him a better engineer in general. “When I first started using the Profile, I thought I sucked, because it was really telling,” he says. “I was so used to other consoles giving their particular signature that when I first got on a Profile I thought, ‘Wow, that sounds like a Shure-52 inside of a kick drum instead of a 52 through a Midas or through a Yamaha.’ Every time I step up to an Avid Profile I know it is going to be accurate. It’s less forgiving and it’s sharpened me up as an engineer. That’s a good thing.”

It’s a proven console—it’s not complicated and it does the job.

While the show is the main focus of any FOH engineer, there are occasions when promoters, labels, or managers request live recordings for album releases or Internet broadcasts. This run of Winter Jam was no exception, and many of the bands integrated a Pro Tools rig with the Profile System, which allowed them to quickly and efficiently record a handful of shows. Plus, an Internet broadcast was provided to fans who couldn’t make it out.

Daniels, who handled both FOH and recording for a number of bands, feels the Profile System makes both a snap. “It was really easy,” he explains. “I came right off the front-of-house console into Pro Tools and hit record. I recorded all 48 channels, plus a couple of audience mics, gave the band a hard drive, and they mixed it all in a week. There was nothing tricky about it.”

As for the broadcast, Holcomb felt right at home thanks to the Avid system. “The broadcast engineer brought out a Profile too, so we grouped everything together on the eight subgroups and sent it to him,” he explains. “I still ran all my VCAs and the matrixes for the outs.”

In the old days, headlining FOH engineers might be slightly nervous when they stepped up to a console after nine other acts have performed, afraid of what’s been changed throughout the night. Lampa admits with a confident laugh that’s the last thing he’s worried about. “I love that I don’t have to think about what anyone else has been doing,” he says. “I know the console is going to pull up and be solid for me. That’s great.”