Capture the attention of online gamers with content that is immersive, engaging, and available on multiple platforms.

The challenge, when Gamer World News launched in April 2018, was to capture and hold the attention of a demographic that is used to sophisticated, interactive graphics and content delivered on multiple platforms. Gamer World News is available on its home website, gamerworldnews.com and on major OTT platforms such as Apple TV, Amazon Fire, Roku, Android TV, Facebook, and YouTube. Gamer World News also is available on Twitter, Instagram, Reddit, Twitch, Snapchat, Flipboard and over 100,000 global publishing sites.

As a start-up, World Gamer News is focusing on producing engaging content while keeping infrastructure costs to a minimum. “Gamers are very visual, so we rely heavily on graphics to define the news” explains Gayle Dickie, CEO and Executive Producer. “The graphics bring the news into the world gamers are used to looking at when they play with these games or look at eSports. We wanted to match the look and feel of the environments gamers in which gamers live.”

Without Avid’s Maestro | Virtual Set, if we just shot on a green screen, our show would look like everybody else. I wanted something clean and cool and now. Avid helps us create the look, feel, and texture of a current network. That’s the key.

“Advanced graphics were absolutely essential to get started,” states Rob Rettberg, Executive VP Production. “If you watch a lot of online games, and then, look at our video, you’ll see it feels as though our hosts are standing in a video. A lot of the post-apocalyptic online games are involved in underground vaults and bunkers and we wanted to give our set that same look. That’s why we went to the Avid Maestro | Virtual Set.”

Gamer World News has a 60-person production team, including writers, producers, and hosts. One Friday each month, Gamer World News moves into the production studios at Illuminate Studios in Los Angeles, CA to produce its premium video stories and content. They rely on the flexibility of the Virtual Set to make quick set changes to enable them to shoot 160 pieces of content in a 48-hour period. 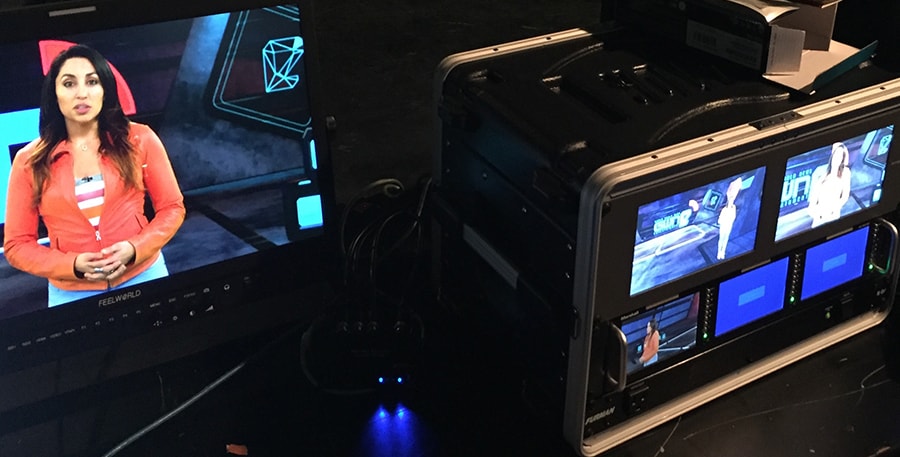 “Illuminate Studios was not setup for any form of green screen graphics, so we brought in Avid’s Maestro | Virtual Set.” explains Rettberg. “We arrive on Friday to set up the lighting, Avid Maestro | Virtual Set, and all the gear that is not setup permanently. We start shooting at 7:30 AM on Saturday and finish around 7:00 PM. We do it again on Sunday.”

Eliminating the expense of physical sets

With Maestro | Virtual Set, World Gamer News does not incur the expense of building physical sets, which is a game changer. Building, transporting, storing, and maintaining sets is expensive and would have limited how Gamer World News approached developing content. “We’re a startup and when we go away at the end of our two-day shoot, the systems go with us,” explains Rettberg. “Then, the next month, we reattach everything.”

“Our virtual set designer makes the Avid system work,” explains Rettberg. Maestro | Virtual Set includes the design tools for creating unique virtual environments that might not be physically or financially possible with conventional sets. The ability to manage the virtual set with a single set designer enables World Gamer News to focus their resources on content—and not on building an expensive infrastructure.

Gamer World News typically does a 3-camera shoot which is captured and edited at Gamer World News headquarters using the Avid Media Composer | Ultimate video editing system. Gamer World News also uses Avid’s Xync 2.0 for camera tracking. Rettberg notes that the production suite at Illuminate Studios has numerous incandescent lights and a massively high ceiling. “High ceilings can be a harsh environment for tracking but, in all of our shoots, we have never experienced a tracking issue with Avid.”

A lot of the post-apocalyptic online games are involved in underground vaults and bunkers and we wanted to give our set that same look. That’s why we went to the Avid Maestro | Virtual Set.

Gamer World News features seven professional hosts; all gamers who play multiple genres of competitive games. Each host brings their unique experiences to the stories, even going “off script” to deliver tips and tricks. “Our mission is to tell an interesting, engaging story, at a fast pace of one-to-two-minutes tops”, states Dickie. “Gamers consume a lot of content every day, both on mobile and online; they want it fast, so they can move on and get to the next thing. We see that in the viewing patterns of the website.”

Each of Gamer World News’ video segments runs between 60-90 seconds. They’re fast paced, informative, and visually interesting. “It’s all about engagement and social media interaction,” states Dickie. “You need highly-engaged participation to capture an audience these days. Between YouTube, Instagram, our website, and Facebook, we’ve reached over a million views. We have a 35 percent retention rate and 90 percent completion rate.”

“We’ve shot hundreds of hours of footage,” explains Rettberg. “We were able to B-roll into screens that were inside the virtual set, which was very cool. Throughout production, the Avid Virtual Set engine was stable. When you’re in production and you’ve got 60 people on call, and only two days to shoot all the content for the next month, you really want something that’s stable, that works consistently without being down. Avid’s tracking tracked perfectly, and the boxes never crashed. That’s a big deal.”

“Without Avid’s Maestro | Virtual Set, if we just shot on a green screen, our show would look like everybody else,” concludes Dickie. “I wanted something clean and cool and now. Avid helps us create the look, feel, and texture of a current network. That’s the key.”