How First-Class Mixes Have Changed Over 40 Years

This blog post is a chapter from How Pros Make Hits by Tom Frampton, posted with permission.

Stayin’ Alive is known to most as a defining track of not only the Bee Gees career but also of the disco genre. As the opening track of the Hollywood film Saturday Night Fever, the track got much exposure, and the single spent four weeks at number one in the US when it was released in 1977. It was nominated for Record Of The Year at 21st Grammy Awards in 1978 and won the Best Arrangement For Voices and Album Of The Year categories. Whether you like the genre or not, Stayin’ Alive’s place in music history is significant. Let’s explore the attributes of the song, mix, and approach to see what we can learn.

In 2017, Stayin’ Alive was re-released with a new mix from Serban Ghenea who is widely regarded as the best mixing engineer in modern times. It was mastered by 7 times Grammy winner and 28 times Grammy nominated engineer Tom Coyne of Sterling Sound. Capitol Records employed the best of the best engineers to make sure this re-release reached it’s fullest potential. Comparing the original mix to the new mix shows how mixing has developed over time.

I've analyzed the difference in tonal balance, stereo width, and dynamic range using Mastering The Mix plugin REFERENCE. I have the new Serban mix in a project, and I'm comparing it to the original. I'm using the level match feature to match the loudness for a fair comparison, and we can see that reference has turned down the Serban Mix by 6.8dB.

The Trinity Display at the bottom of REFERENCE is showing that the low-end from 0-100Hz is 2.3dB louder in the Serban Mix. This makes sense as modern tracks tend to have a weightier bass than tracks that were originally pressed on Vinyl, and today’s audience playback systems are more capable of generating a good low-end response. We can also see in the low-end band that the stereo width is showing -1.6SW meaning that they have made the kick and bass more mono in the newer version.

The second band between ~100Hz-600Hz shows a relative dip compared to the adjacent bands. We can hear that the new version has some EQ cuts around this area which gives it a much cleaner sound than the original, giving more clarity to the individual elements of the mix. The stereo width is showing a positive figure of 0.5SW showing that these frequencies are slightly wider in the 2017 mix. 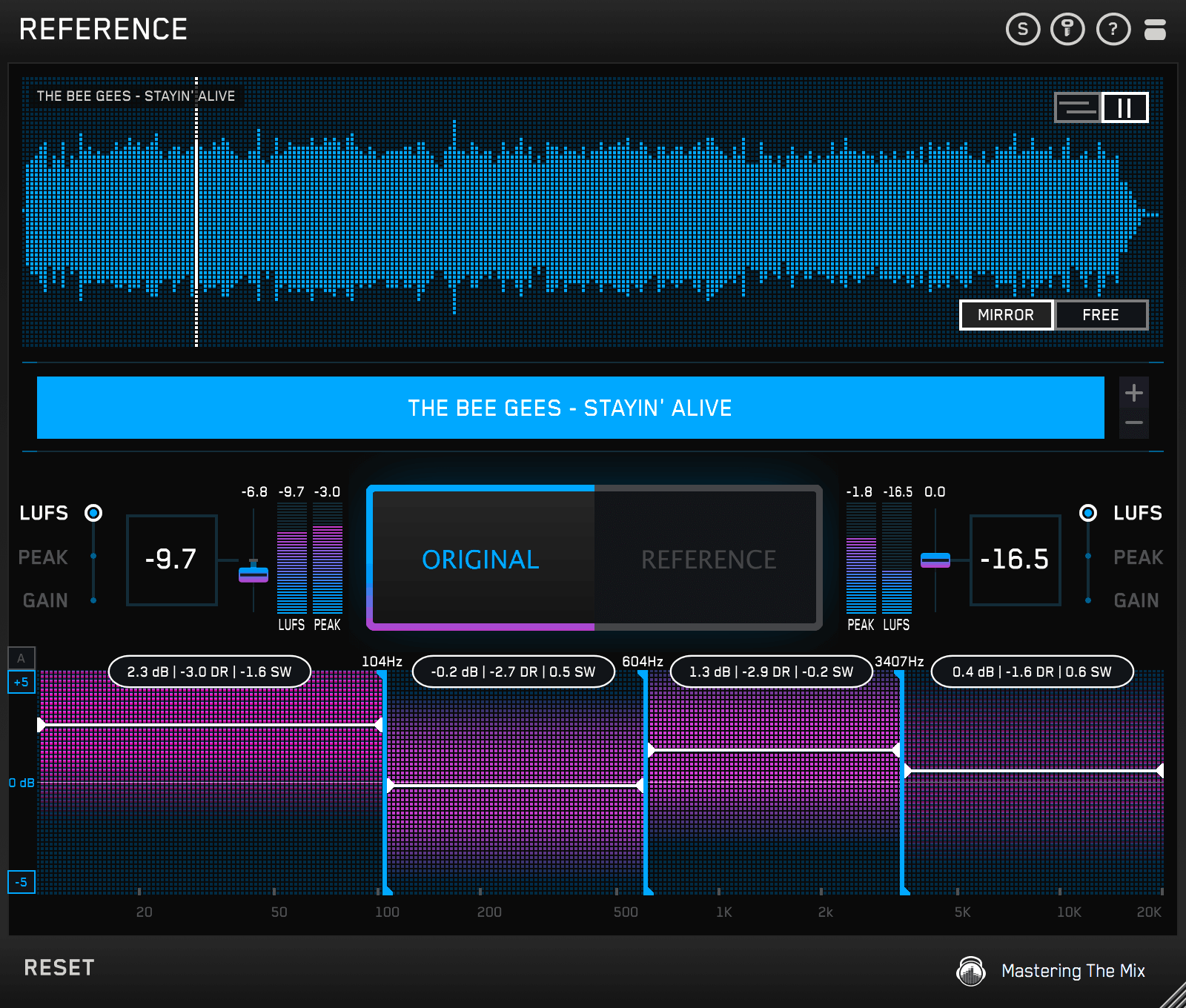 The two bands occupying 600Hz and above show a slight increase in perceived volume, which points to the enhanced clarity of the new mix. It’s subtle in the context of the whole mix, but many off the individual elements have a new shine that helps them cut through.

Across the whole frequency spectrum, we can see that the dynamic readings are hovering around -3DR except the band covering ~3.5kHz and above which is -1.6DR. This shows that the new version is considerably less punchy than the original. There has been more compression applied to control the dynamic of the overall sound, with less compression applied to the higher frequencies to keep the integrity of the hi-hat transients. The overall compression gave the Serban Mix around 7dB more loudness overall and gave it a slight ‘pumping’ sound.

The stereo positioning of the individual channels is very similar to the original, though Serban added more width to the backing vocals and centralized the low-end as previously discussed. Had Serban dramatically adjusted where the brass, electric guitar, electric piano, etc. had been positioned it may have been too much of a change from the original for fans to enjoy. It was a safe decision to keep the panning positions consistent between the versions.

Stayin’ Alive is a very full and rich sounding mix with a dense arrangement of instruments. Many of the channels overlap in frequencies, though the conflict is reduced by the rhythms of the channel complementing each other.

An interesting characteristic of this mix compared to mixes that came before is that the stereo placement of many of the instruments is evenly balanced between the left and right channel. So the electric guitar sounds wide, but it’s also heard in both the left and right speaker without having two very different audio takes. In earlier ‘70s mixes you would find that the various elements would have either a left, right or central pan.

Barry Gibbs falsetto plays an important role as the main melodic feature. We can see that the electric guitar and piano occupy a slightly lower range adding some mid-girth where the vocal tone isn’t so strong. The strings occupy a similar range but are panned wide and out of the way for the vocal to shine through.

The electric piano goes from being balanced in both sides when the mix is more sparse to being more dominant in only the right side when the mix gets busier. This is a great way to add interest to the mix by evolving the panning, but it also makes space for the mix to become fuller during different sections of the song.

EXPOSE is showing the technical details of both the 1977 version (top) and the 2017 version (bottom). The most considerable difference is the compression and limiting, with the 2017 version being around 7dB louder. This lead to a reduction in the dynamic range punch by 4.8DR.

We can also see that the original kept the peak below 0dBTP, whereas the 2017 version peaked above 0dBTP several times during the track; though the loudness wasn’t pushed to the point where the audio is constantly clipping. This could have been easily solved by reducing the output on the limiter by 0.38dB, giving a true peak of -0.01dBTP.

This blog post is one of 40 chapters in ‘How Pros Make Hits’, an eBook created by Mastering The Mix. Music surrounds us. It’s everywhere. Your music has the potential to connect with millions of people. Don’t produce another second of music without first learning how these pros did it to give yourself the best chance of success. Visit the How Pros Make Hits webpage to download 5 free chapters now. 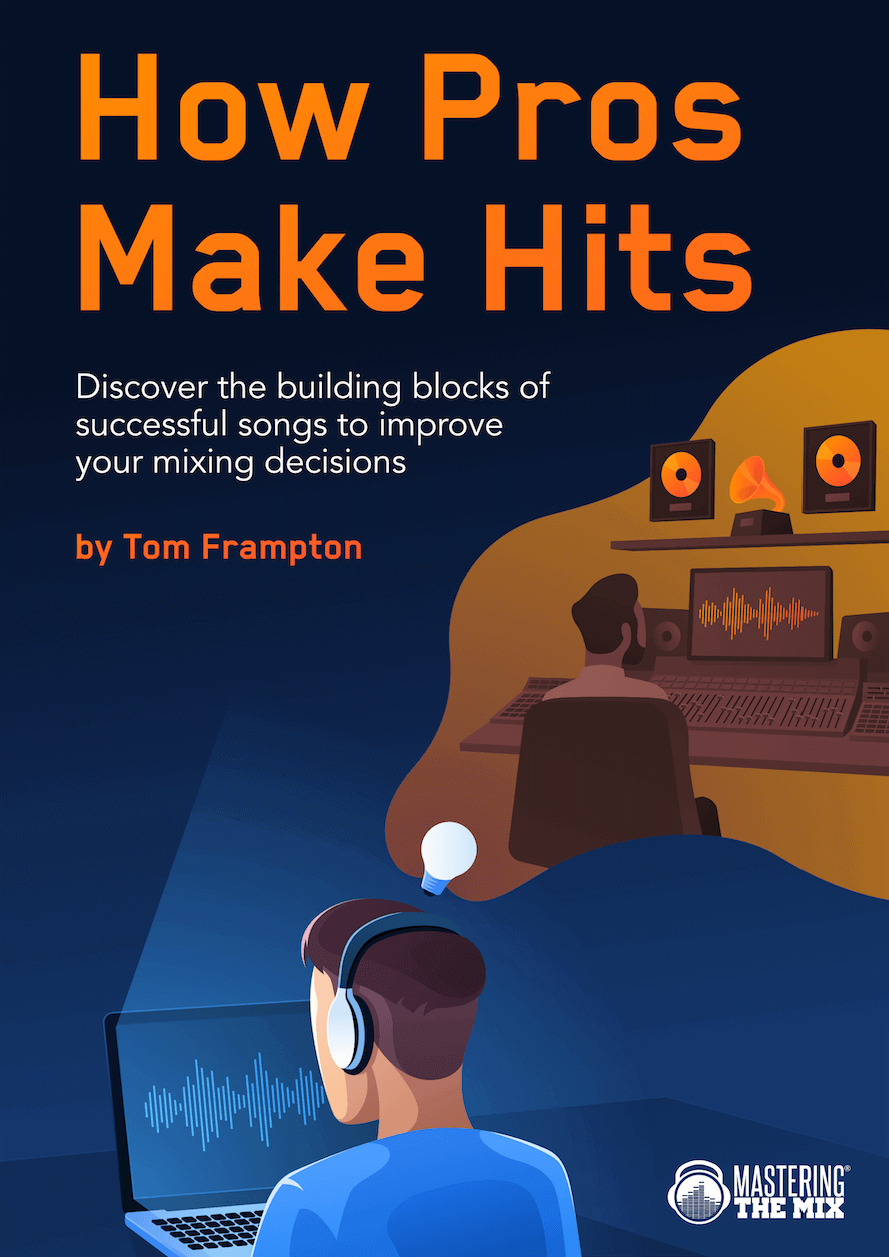 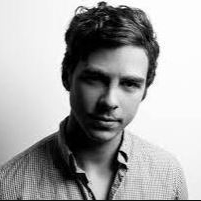 Tom Frampton
Tom is a musician, audio engineer, and entrepreneur based in London, UK. His credits include Tiesto, David Guetta, Steve Aoki, and more. His company Mastering The Mix creates game-changing plugins for forward-thinking producers.