FastServe is designed to accelerate today’s demanding HD, UHD, and HDR workflows, so you can get content on air quickly. Plus, with tight MediaCentral integration, you can automate ingest and file check-in, edit media while capturing it, and play back content as it’s being transferred.

FastServe | Ingest and FastServe | Playout support the widely adopted SMPTE ST-2110 standard and Networked Media Open Specification (NMOS), opening up more flexibility in your workflow. The servers seamlessly integrate with a variety of studio video over IP-enabled third-party solutions and can be controlled by NMOS servers for on-the-fly remote configuration.

The modular architecture makes it easy to customize a server to support the smallest regional studios to the largest multinational media organizations. Transition from HD to UHD, or from SDI to video over IP, with interchangeable interfaces. Its redundant 10GbE architecture integrates directly with Avid NEXIS, eliminating the need for any additional hardware.

FastServe is robustly built to address the most demanding production environments, with no single point of failure. The servers are equipped with hot-swappable dual power supplies, dual port network connections, and RAID-protected hard disks running the virus-free and stable Linux operating system, ensuring you can capture the media you need and keep content safe.

Get a full return on investment

FastServe works with today’s and tomorrow’s technologies, enabling you to confidently invest in an industry-leading solution that reduces costs and provides a more flexible production environment—now and in the future. It integrates easily into any broadcast infrastructure, requiring fewer servers and fewer operators to support even the most demanding productions.

Get easy HD and UHD ingest

Capture up to four simultaneous UHD streams or up to eight HD streams. You can record hundreds of hours to internal storage, as well as stream to Avid NEXIS in real time, giving you media ready for production, plus a backup.

FastServe | Ingest offers the highest possible level of redundancy with the ability to write XDCAM media into separate Avid NEXIS systems in parallel, serving different production and backup needs to lower costs and provide peace of mind that the show will always go on.

Edit media while capturing it

When used with MediaCentral, you can log and edit incoming streams as they’re being ingested—without waiting for the recordings to finish. FastServe can also create high-quality proxies* in parallel, making the multi-resolution clip instantly available to MediaCentral and Media Composer users to speed up editorial.

* With XDCAM, XAVC-I, and AVC-I formats only

With the FastServe | Ingest AVC-I and XAVC-I options, you can extend your codec support to enable eight AVC-I 100 or XAVC-I Class 100 HD, 1080i, or 1080p ingest channels. Get simultaneous dual ingest of high-res and proxy media directly to Avid NEXIS, plus “Edit While Capture” capabilities and multi-resolution dynamic relink for MediaCentral and Media Composer users.

Make an impact with HDR

With HDR support for Avid DNxHR, AVC-I, and XAVC-I 1080p formats, you can capture and edit HDR source material in 10-bit quality. The user-defined color space is maintained as part of the media metadata, making it available when editing in MediaCentral and Media Composer.

With MediaCentral | Capture, you can increase the speed and accuracy of media acquisition through advanced automated feed scheduling and control—invaluable for 24/7 operation. Editors and journalists can begin working with the media as it’s being ingested.

With FastServe | Ingest remote console, you can sync multiple channels over multiple servers to start and stop recording and transfers with a single button press. Get easier file management and reduce the complexity of synchronizing multiple camera feeds for editing. 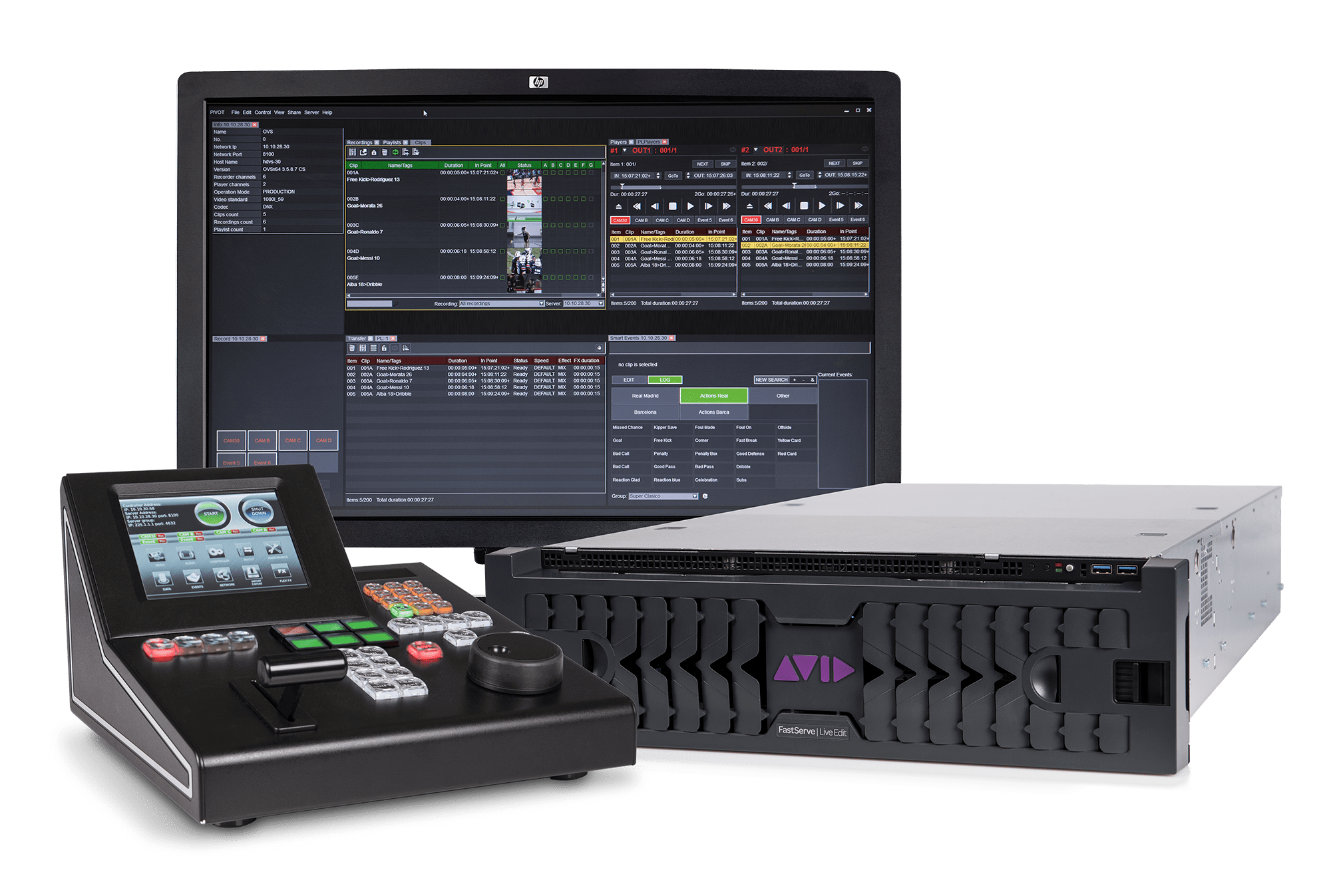 Get breaking stories on air fast

When news breaks, video from satellite feeds, cameras, and other sources come in fast and furious. FastServe | Live Edit enables a single operator to record feeds, edit clips quickly, create playlists, and add or remove segments from playlists while on air to keep up with last-minute changes.

Ingest and edit in parallel

As a turnkey solution, FastServe | Live Edit enables you to ingest multiple streams in HD or UHD, as well as HDR, and edit media as it’s being captured, speeding your time to air. The server can house over 200 hours of DNxHD (120 mbps) media internally. Enable loop recording for a continuous 24/7 capture cycle.

With the included hardware controller, you can edit and play out stories, highlights, and replays near-instantly from the surface. Access clips, playlists, server controls, and configuration tools through the touchscreen. And speed through recordings and complete tasks with the jog wheel, T-bar, and other controls.

Recordings can be simultaneously streamed in real time to Avid NEXIS storage, making the media immediately available to MediaCentral and Media Composer users. Tag clips from the touchscreen to make media easier to find and monetize across the platform.

When recording feeds from multiple games, Studio Mode enables a single operator to create highlights for each game, while the server manages each input’s clips list and playlists separately. Use touchscreen keyword tagging, and journalists can quickly locate the game highlights they need when using MediaCentral.

When covering live events and breaking news scenarios, the possibility of airing offensive or controversial content in your live broadcast is a risk. With the delayed broadcast option, you can set a short time delay to prevent inappropriate content from getting to air.

FastServe | Playout is available in 8-channel HD/UHD and 4-channel HD server configurations and integrates into any existing Avid news playout environment. Its STP (Send to Playback) engine enables playout while the media is being transferred from timeline to server. It integrates with MediaCentral | Command for news rundown control, as well as other common studio automation controllers, enabling a fast, accurate, and highly redundant news playout workflow.

Pair FastServe | Playout with Maestro | News and you can control video, image, and motion graphics playout from a single solution. It also tightly integrates with MediaCentral, offering a holistic and streamlined workflow for end-to-end UHD/HD playback.

With support for a wide range of codecs and wrappers, it enables back-to-back video and graphics playout in fast-paced news environments—without transcoding in advance. It offers up to 16 TB of RAID-protected internal storage, plus direct media playback from Avid NEXIS, speeding response time.