I started Tiffany Twisted as a personal recording project, not initially intended for the live stage, but it was only after our guitarist Adam and I met and clicked musically that we found a vision for the band: to create something that gave people that same solace we found in the bands we grew up with.

We started out playing open mic nights around London as a duo to test the waters and ended up getting booked for bigger venues that needed a full band. It was at this point, in 2019, that Tiffany Twisted became a four-piece line-up.

Over the next few months, we gigged all over London and got to play some legendary rock venues like The Troubadour. Sadly, quite a few of these venues have closed since the pandemic, so we're grateful to have been able to play them. Some shows were great, some were pretty terrible. We once played a club in East London that cut the power on us after two songs and attempted to kick us off for a DJ. I was so angry that I kicked over a speaker and broke my toe, whilst Adam kept shredding on stage until security got him out. We were, unsurprisingly, banned for life, and the promoter ran off with our money. 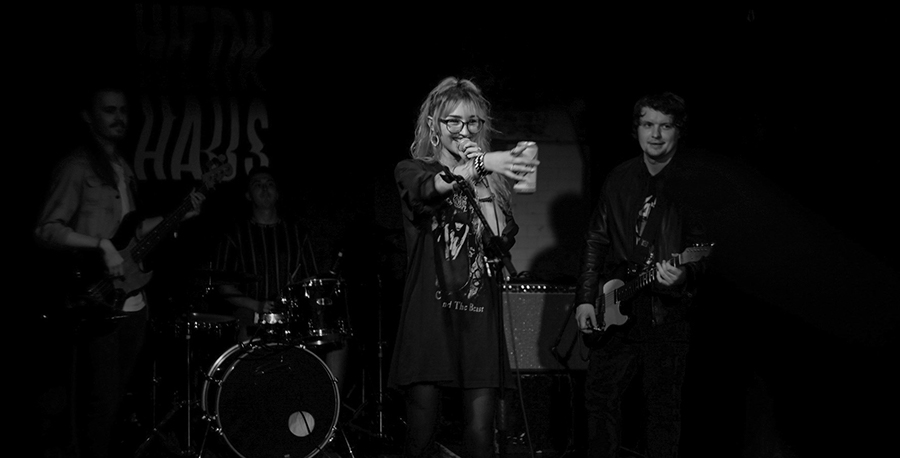 The Road to Abbey Road

It was during this time that some of the old tracks were discovered on SoundCloud by an independent startup label, and we were offered a deal for a five-track EP. Within a month of signing, the label revealed that their plan was to record the EP at Abbey Road Studios.

The label gave us a call out of nowhere. The words we heard were very simple: "Would you like to record an EP at Abbey Road?"

Of course, we said yes.

We weren't prepared for the follow-up question: "How would you like to record it in Dolby Atmos®?"

We were heading into the Christmas holidays of 2019 and were told we could be in the studio by January. This gave us just under four weeks to write our debut EP and have the songs ready to record live in the most iconic studio in music history.

Inside the Writing Process

Tiffany Twisted songs always start with me and Adam sitting together, experimenting with new riffs and melodies until something really sticks. The lyrics then follow, but I have to be alone for this, always!

Just a few weeks before we received the Abbey Road news, Adam was sat twiddling on the guitar, and I was smoking my 40th cigarette of the day outside Adam's place. Through the window, I heard what became the "Sold My Soul" riff, dropped my cigarette, and shouted, "That's it, that's the next single we release!"

On paper, it's quite a weird song to choose for a single; the verses have this staccato 7/8 feel, which messes with your head, but it just really fit for us. We find it's really good to write acoustically because it reduces a song to its bare essentials. If there's something good there, you can tell straight away.

Of course, you don't always know how it's going to come out! At that point we didn't have the time or resources to prepare full, professional demos ready for the studio, so it had to be a very visual process; one that we just couldn't yet manifest. It's a bit like watching a movie scene and imagining the soundtrack that would go with it. We describe it to each other and enter that mind-space. When we agree on that vision for a track, it becomes quite a spiritual experience. Something clicks, and you can feel the energy change.

This happens often when we are together. Adam plays something on guitar that will catch my attention, then there is this magical moment when melodies and lyrics begin to form. All of a sudden, we are playing a track in this semi-meditative state.

Making the Move to Dolby Atmos

This is why Atmos was so perfect for us to record with. Even though it may seem like an unconventional choice for a rock band, this approach allowed us to finally create something that fulfilled this vision because there were no boundaries on what could be in the mix. We were certain that the final Atmos experience with these tracks would be like stepping inside that scene we started with, purely because of the absolute immersion you get with it. Dolby suddenly makes the music become this living, breathing thing. You just want to step inside its chest!

Going from this acoustic approach to a full live band recorded in Atmos is quite a big jump though! Once the seed is planted in those initial acoustic songwriting sessions, Adam and I share the music with the band and the layers begin to form. The song always transforms as soon as you play them live with a band. Jack's drum beats would transform sections and really elevate the song. This certainly happened with "Sold My Soul." We had initially always envisioned the chorus to have a half-time feel the whole way through and it was only whilst running it through with Jack, a few days before we were scheduled in the studio, that the version we now know came about. The first half of the chorus starts in double-time and then resolves into this slow half-time groove. That contrast really lifted the chorus.

We recorded the songs live in Studio 3, so it was important to us that the main body of the tracks could be fleshed out in that traditional way; the four of us stood in a room smashing it out. We really wanted a raw, grungy sound to remain at the core of the tracks with the Atmos layers then added on top to expand it out.

It's funny thinking back to recording these songs because many of our favorite guitar moments and all the vocal harmonies actually came from off-the-cuff improvisations that were overdubbed on the last day. 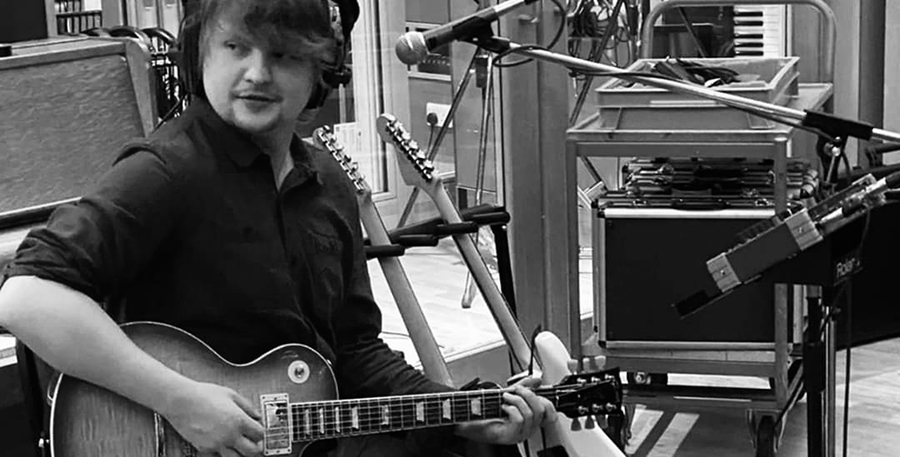 Adam was late to the studio on day two and the band had been finishing up on "When We Are Nothing." Adam asked everyone if he could run into the live room, press record, and just sit with the guitar to see what happens. All the lead guitar lines you hear on that track came from this impromptu improvised take. After my first vocal line, there's an artificial harmonic melody that sounds like a xylophone. Adam was actually a bit shocked that it came out so well without any planning—those things are not always easy to get! For sure, there is this powerful energy inside Abbey Road—an energy that somehow zones you into your music even more and you can really just feel the talent that has stood there before you.

The "Speaking in Tongues" solo also came about in this way, just sitting in the studio with a Gibson Les Paul shredding away while the mics were on. We knew there would be a solo in the final chorus as I sang, but we hadn't planned much more than that. In the moment, Adam decided to channel some Van Halen and went for an ascending tapping lick as an unapologetic homage to one of the absolute greats. The one thing Adam did know for sure was that he needed the tone of this track to resemble that of Kirk Hammett's guitar in "Master of Puppets." He went and asked our engineer, Chris Bolster, if he thought he could get that sound, and Chris laughed and said that he had been working with Kirk a few days earlier, so he definitely had that tone covered! It was a very surreal moment. Chris played a really integral part in the final mixes and went above and beyond to make our vision a reality. Thank you, Chris!

However, the coda section of "When We Are Nothing," with the layering of the lead guitars, was an example of us writing specifically with Atmos in mind and it didn't disappoint. "Overdose" was another track that really was brought to life inside Abbey Road. We had imagined it to almost feel like a dialogue between the parts, especially the vocals and guitars, panning in and out of your ears like a breathing pattern. Atmos was really able to materialize that. The technology seems to be able to add that extra emotional dimension for the listener and that gives creative freedom for the artist. It's a beautiful combination. Each section had a life of its own in isolation and, listening back to the Atmos mixes, these guitar and vocal lines really echo through your body!

Releasing Our Debut EP with AvidPlay

The Atmos mixes had actually been sat on a hard drive next to my bed for many months after Abbey Road, as our label wasn't able to finalize the release. We ended up leaving our label soon after and found ourselves in the position of being an independent artist with an Atmos EP and no direct way to release it. We spent a lot of time looking around for any possibilities to get this mix heard and having already been in communication with Dolby about the release, we were fortunate enough to be put in contact with Avid to get involved with the new distribution platform, AvidPlay. AvidPlay has really been a godsend for independents like us, finally levelling the playing field for artists without major label backing to fulfil a project like this. It's a big step forward for the industry, with such a large number of independent artists gaining mainstream success these days. 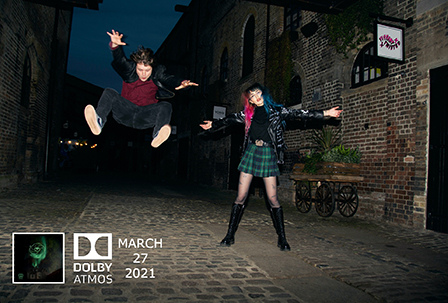 Using Avid Link and distributing with AvidPlay has been such an easy process—one which I was initially worried about, having seen the complexity of encoding Atmos prior to the platform's launch! Now as we approach our EP's first anniversary, we are excited to release it in Dolby Atmos. We hope you all enjoy listening to it as much as we enjoyed creating it!

How to Distribute Music Quickly and Easily with AvidPlay

Learn how to distribute music to streaming platforms like Spotify, Apple Music, Tidal, and more—and get paid doing it.
Read more 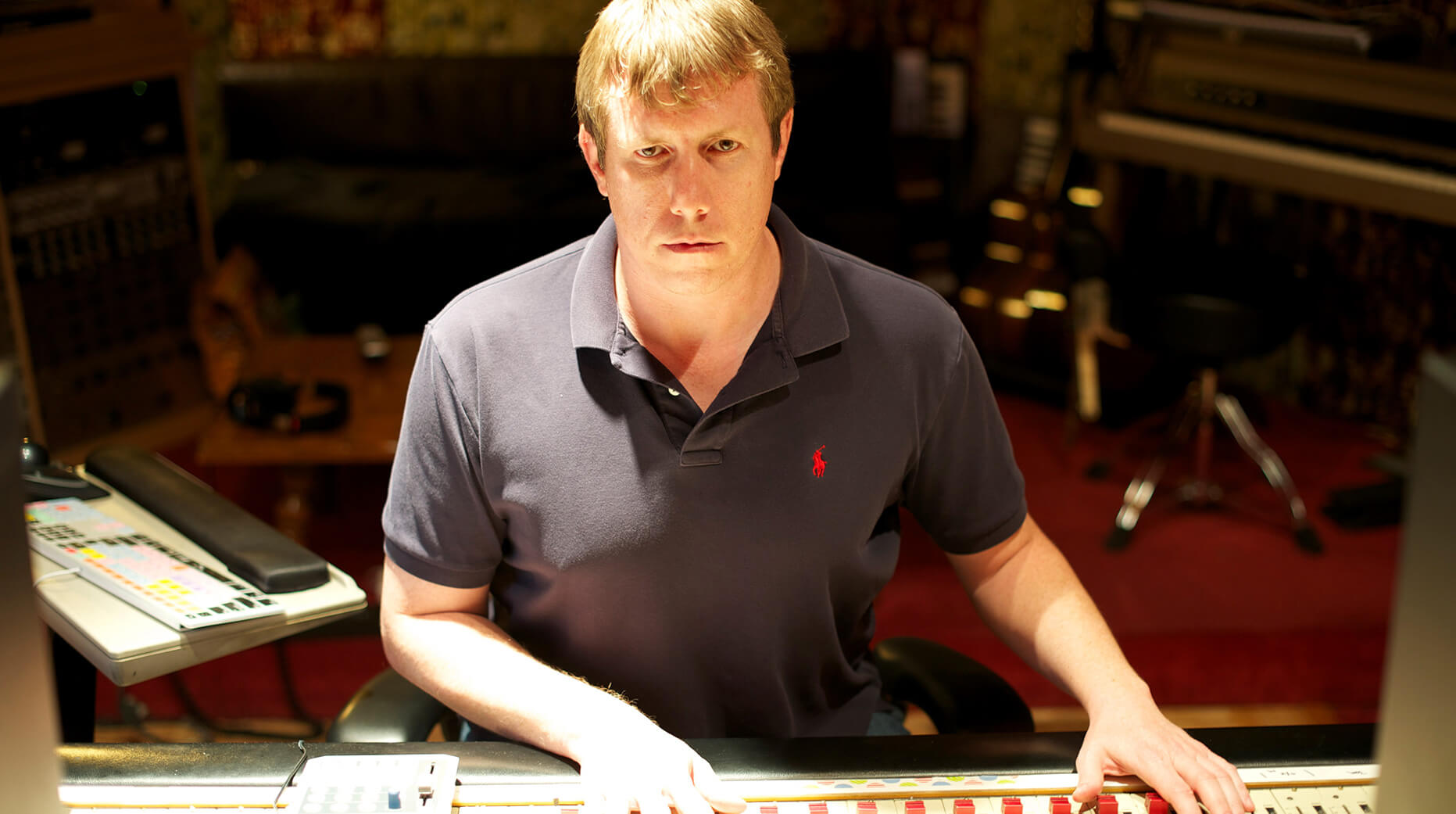