With Pro Tools 2021.6, we are continuing our efforts to return much of the import and export functionality after the depreciation of the 32-bit QuickTime components on macOS Catalina and later. As we have progressed, we have made detailed documentation and walkthrough videos to help explain the improvements and how to work with them. And we are continuously working to exceed the previous file functionality and implement it in a way that is forward looking so that it can be utilized by both Pro Tools and Media Composer.

Pro Tools 2021.6 adds the following important functionality in the Bounce Mix window, which is available in the Pro Tools File Menu as well as by the shortcuts Command-Option-B (macOS) or Control-Alt-B (Win): 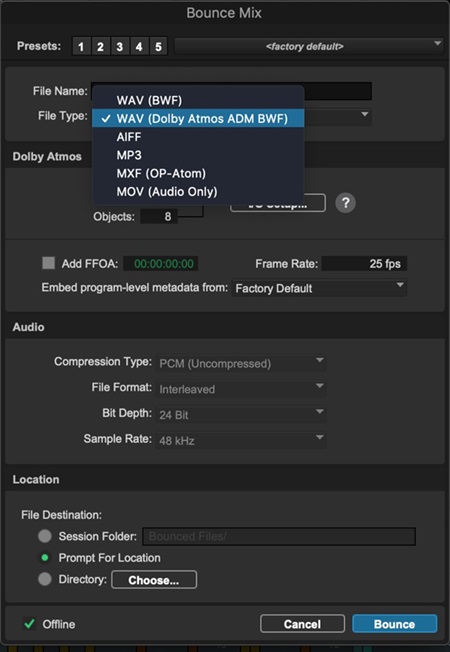 The Bounce Mix window allows you to export source video to DNxHD/HR and Apple ProRes MOV files, as well as MXF wrapped versions of these codecs to MOV files. Our goal is to extend same as source export support to other codecs in the future.

In the simplest terms, “same as source” means that rather than transcoding, the previous video frames are directly copied into a new file, where it is recombined with the bounced audio stems. This has several benefits. One is that the time required to process is much shorter. The other is that the audio department makes no changes to the video content, so it’s the exact same quality and format as before. The audio is the only thing that has changed and can be passed back with the original picture.

Pro Tools | Ultimate can now import, play, and export H.265 video. H.265 has benefits in overall codec efficiency and adds compatibility with devices that use these formats, such as iPhone, allowing those files to be directly imported into Pro Tools. Exporting may be done with variable or constant bit-rate settings just like H.264. There is an additional Encoding Quality control that offers a balance between quality and bit-rate precision versus encode speed. 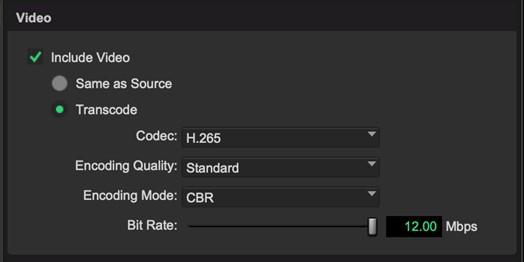 Previously, only PCM audio was available for MOV exports. Now you can export AAC audio with MOV files as well. This enables the audio to be compressed in either CBR (Constant Bit Rate) or VBR (Variable Bit Rate) for MOV exports, in mono, stereo, 5.1 and 7.1 formats.

AAC export will be available for Pro Tools | Ultimate, as well as Pro Tools software (for mono and stereo mix source widths).

The remaining channel widths have been implemented for Bounce Mix when using the MOV file type.  There are no longer any channel width restrictions in MOV.

It’s worth noting as we go through this transition from the older implementation of QuickTime 32-bit components that we have gained several features that were previously not available. These include audio import from MXF OP1a, a common file container in broadcast; import and conversion to the session format from Apple Lossless; and, in this latest release, the H265 Codec support in MOV.

All this progress except for a few same-source exports is much closer and, in some cases, already exceeds the previous capabilities of the Bounce QuickTime functions and available import formats.

See What Else Is New in Pro Tools

Daniel Lovell
I'm a Kiwi living in Tokyo, Japan. From Audio Post and now an Audio Solutions Specialist at Avid, staying in touch with the industry with the occasional spot of mixing and sound design for TV. Sound, music, and technology have been my career for the last 20 years and my passion for a lifetime.