In 2020 Avid introduced two new audio interfaces: Pro Tools | MTRX Studio and Pro Tools | Carbon. They are both 1U units and they share a common front panel design but are two very different products. This article sets out to clarify those differences.

MTRX Studio is a DigiLink interface that requires HDX or HD Native and is suited to a variety of purposes, including music production, but really comes into its own in audio post environments that require surround and Atmos workflows. Carbon is purpose built for music production and recording and solves the problem of simple low-latency tracking in a native environment by making use of HDX DSPs that are incorporated into the interface and integrate seamlessly with the Pro Tools software.

MTRX Studio is a very capable and flexible audio interface. It is designed for the audio professional who needs the ability to interface with other audio equipment in the studio, whether analogue or digital, in a variety of formats. It features a completely configurable software controlled monitoring section that can accommodate any monitoring environment all the way to Dolby Atmos. Carbon is specifically designed for music production—especially recording musicians and bands. The I/O complement reflects this goal, providing everything that you need to run a recording session without the need for any additional hardware. 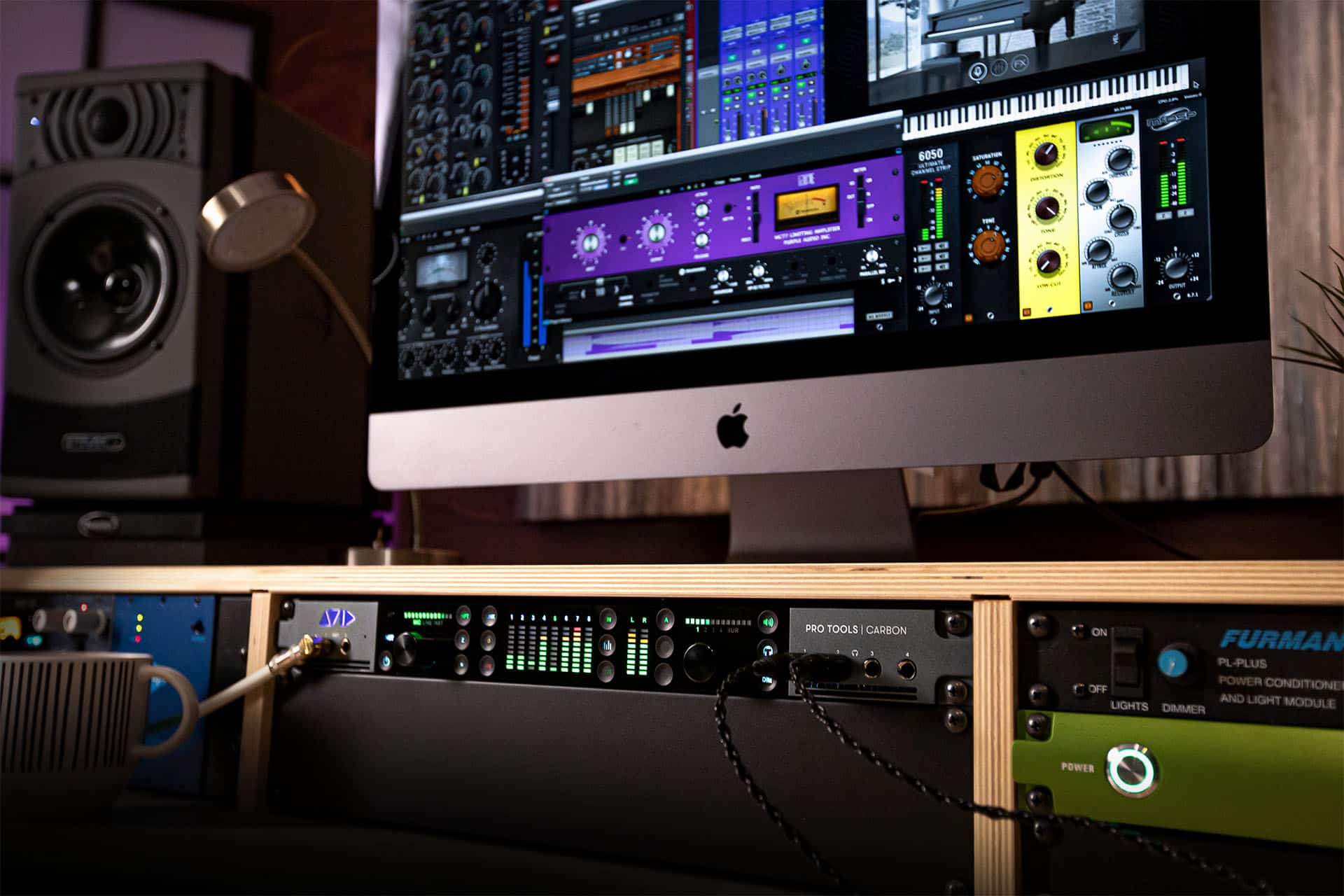 The two products sit at very different price points and are designed to address different pro audio markets. A Pro Tools | HDX Thunderbolt 3 MTRX Studio bundle is $9999. Whereas Carbon retails for $3999. The MTRX Studio pricing includes an HDX card which is required to connect to your host computer, although you could choose to use the HD Native Thunderbolt card instead. The price includes a license for Pro Tools. Pro Tools | Carbon ships with Pro Tools software and Pro Tools | MTRX comes with Pro Tools | Ultimate but also includes the DADman software to enable remote control of the monitoring.

Connecting to Your Computer

MTRX Studio is a DigiLink interface for HDX and HD Native systems. It does not connect directly to the host computer but instead is connected to either an HDX card or an HD Native Thunderbolt card using the DigiLink protocol. DigiLink is Avid’s own audio connector that gives us complete control over the audio between the processing card and the interface. MTRX Studio is compatible with both macOS and Windows operating systems.

Carbon is a Core Audio AVB device. That means it plugs directly into your Mac using a qualified AVB port, whether that’s using the onboard Ethernet port or a qualified Thunderbolt Ethernet adapter. AVB is a key technology choice for Carbon. It’s an Ethernet standard that offers dedicated bandwidth, low latency streaming with precision timing and a 32-bit floating path throughout the interface and into Pro Tools. And it gives us flexibility for the future.

The I/O complement of the two interfaces points to the differences in intended use.

MTRX Studio has two mic pre-amps, perfect for recording VO, ADR or Foley. It features 16 analogue line ins and outs and ADAT connectivity for adding ADAT-enabled converters and mic pres. Importantly, MTRX Studio has a Dante port for 64 channels of Dante I/O. Dante has become a standard digital audio interconnection protocol over the past few years in both live sound and studio production. There are numerous Dante peripherals on the market that enable a variety of workflows and having this connector on MTRX Studio is an important when it comes to integrating it into a modern production environment.

In contrast with the connectivity required in a large studio environment Carbon is designed to meet the needs of a smaller studio or home production environment. It has eight mic pres to enable you to record multiple performers or mic up a drum kit, for example. It has eight line inputs and outputs that could be used for hardware inserts for studio outboard equipment such as compressors or EQ and it offers 16 additional inputs (at 48kHz) using ADAT connectors to facilitate the connection to third party converters or mic pre-amps increasing the number of simultaneous inputs to a maximum of 24 – or 25 if you include the built-in talkback mic. Carbon has four headphone outputs to give you the possibility of creating four separate headphone mixes for the musicians in your studio without having to introduce additional hardware

MTRX Studio has an incredibly comprehensive routing and monitoring section. It is software controlled, using an application called DADman and, as such, is completely configurable. A 512 x 512 cross-point digital matrix enables you to patch any source to any destination. The monitoring section lets you set up as many speaker sets as you need in any format, all the way up to Dolby Atmos and beyond. Cue mixes are, again, completely configurable. Set up as many headphone feeds as you need from any source and decide which ones have talkback assigned and so on. All of the monitor capabilities can be controlled via EUCON from S6, S4, S1 or Dock so the unit itself can be installed in a separate machine room. Finally, the built-in speaker EQ and delay processing allows you to apply room correction EQ and delay to your monitoring path. 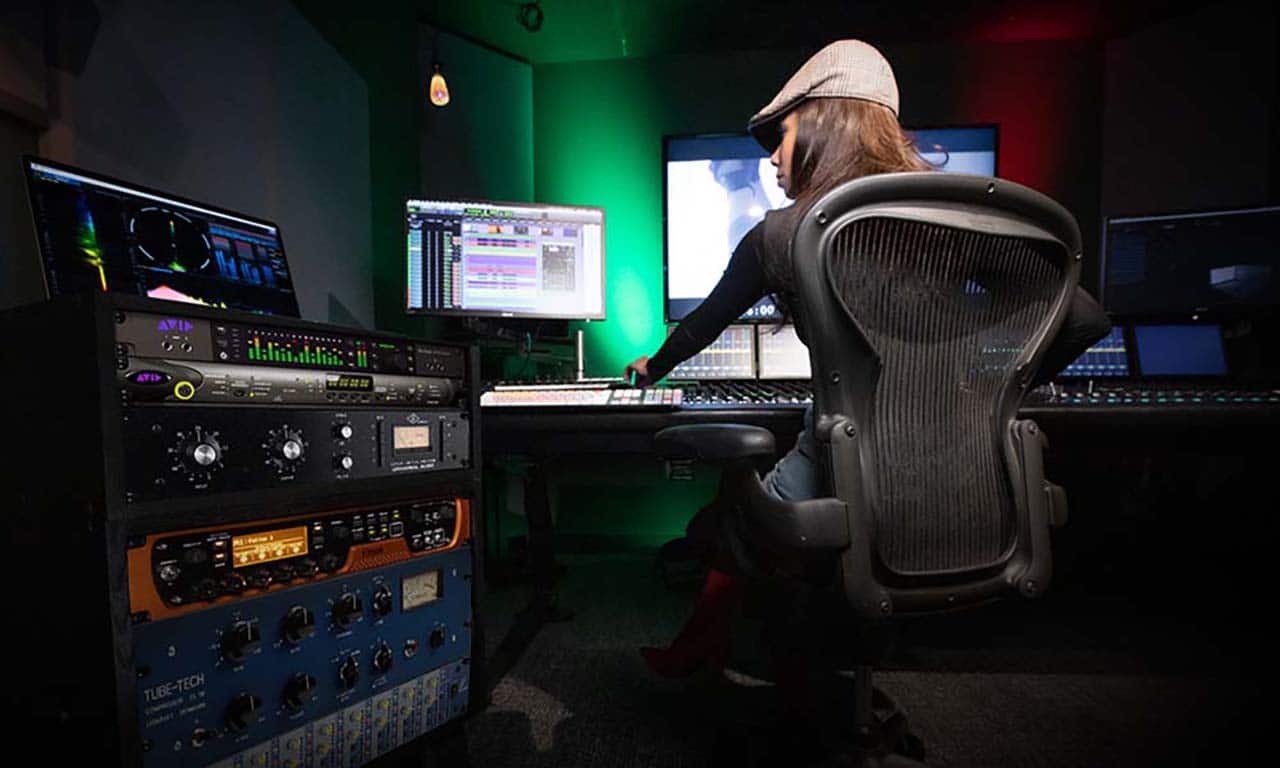 Carbon gives you everything that you need to run a recording session. The monitoring is built into the interface and controllable from the front panel. You can address three sets of stereo speakers along with Dim and Cut controls and four separate headphone outputs. A talkback mic is built into the front panel. Carbon is designed as a desktop interface to be positioned so that the controls are accessible. Carbon and Post-Production

There is nothing to stop you using Pro Tools | Carbon in a post-production workflow but there are a number of reasons that will make it less than optimal for post-production environments. Carbon is designed for music production and is therefore equipped with stereo monitoring capabilities and does not have surround monitoring. If you were to use Carbon’s line outputs for 5.1 or 7.1 audio then you would need to route them to a hardware monitoring device to allow you to set monitor levels. You would also not have access to the flexible surround routing and downmixing that is offered by MTRX Studio using DADman. Another important factor is that when you are working to picture then you need to ensure that the picture is accurately locked to audio, without any deviation. The only way to ensure that this is the case is to use frame edge sync. Frame edge sync is derived from a Video Reference sync source and requires an Avid SYNC HD to get frame edge sync into Pro Tools. The SYNC HD connects directly to the HDX card or HD Native Thunderbolt interface and therefore there is no way to lock to frame edge if you are using Carbon as your audio interface.

MTRX Studio is perfectly suited to music production but if you are recording multiple musicians then you will need to connect external mic pre-amps to the line inputs and use either the line outs or Dante to connect additional headphone pre-amps for cue mixes. In addition, the Hybrid Engine workflow that was pioneered by Carbon will increase the flexibility of HDX systems for music projects that include native processing such as virtual instruments.

For more information please read our comparison page and visit MTRX Studio and Carbon on Avid.com