It’s with great pleasure that we announce the immediate availability of our December release of Sibelius. This update is included as part of your Sibelius subscription or Software Updates + Support Plan for Sibelius perpetual licenses. So, if you’re excited to get your hands on the update, head over to your Avid Account if you’re on your computer to download the installer. And for those on an iOS device, you can grab the update from the Apple App Store.

If you’re new to Sibelius, you can download the free 30-day trial, or get started with Sibelius First, our free app for Windows, Mac, and iOS that lets you write music up to four staves. If you’re reading this in December 2022, we’re currently running a promo on our webstore on new subscriptions for Sibelius Artist and Sibelius Ultimate.

This update introduces a new paradigm for managing subsets of instruments in your scores, as well as adds a number of new barlines and capabilities, plus support for macOS Ventura, so let’s dive in.

Sibelius can now create a “Score Subset” that contains, as the name would suggest, a subset of staves from the full score. This is ideal for sketching out ideas and for creating rehearsal scores. To create one, simply select the staves you need in your full score, and select Parts > New Score Subset: 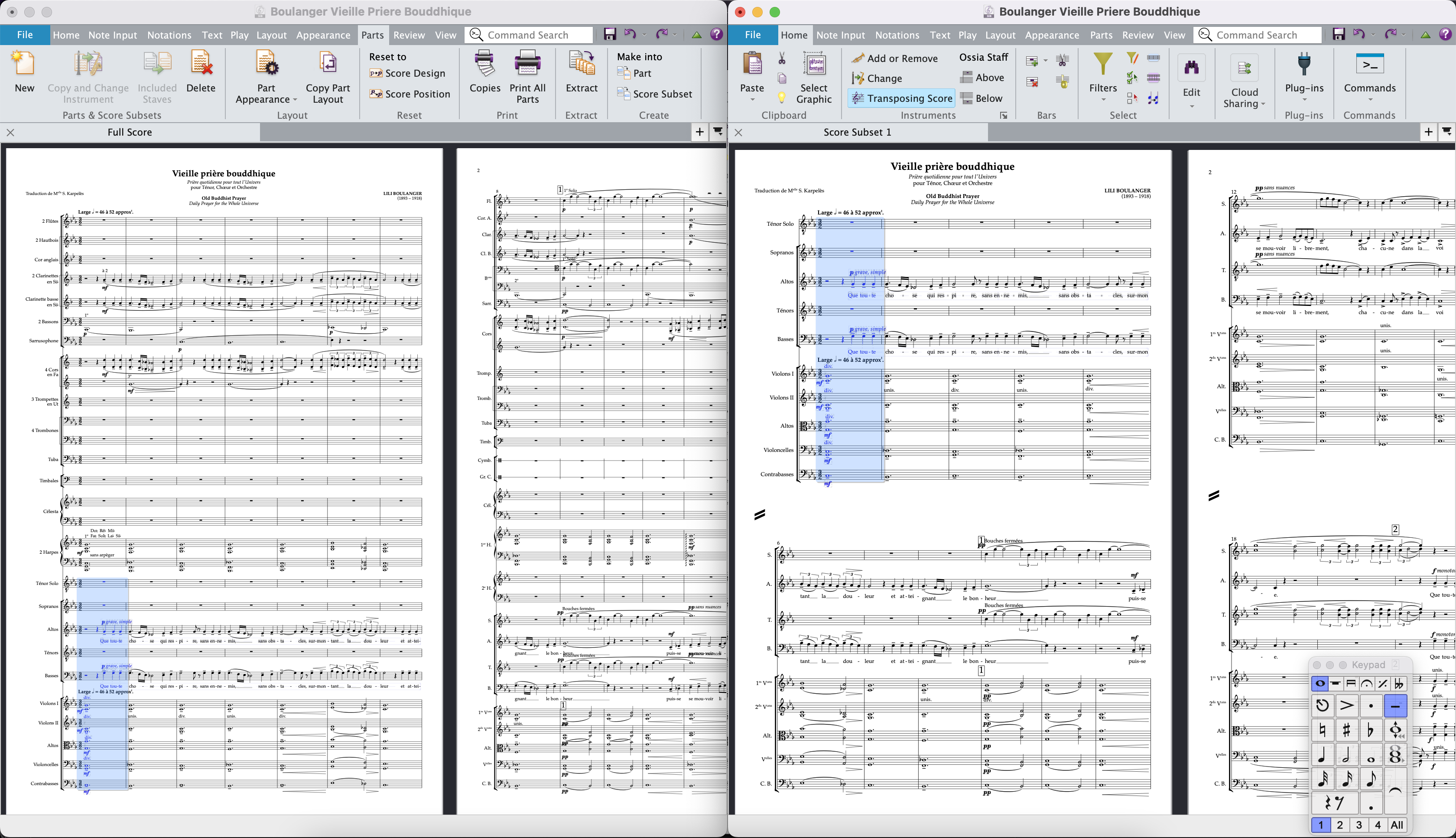 You can also create a subset by searching for “Make into Score Subset” (or just “subset”) in the Command Search in either the desktop or mobile version of Sibelius.

Score subsets are treated as scores in Sibelius and not like Dynamic Parts. The music, text, lines, and symbols are all directly linked between the full score and each subset, so any changes you make in one will be reflected in the others. However, these are different to Dynamic Parts, where you can make adjustments to the position of objects and hide/show items. Because Score Subsets are a subset of the full score, they don’t have the same overrides as Dynamic Parts.

You can continue to have several differences in subsets to help you lay the score out the way you need. Each subset can have its own page and staff size, as well as page and staff margins. Simply open the Document Setup dialog (Control + D on Windows or Command + D on Mac) to set these from within the subset. You can also use Focus on Staves independently too (found in Layout > Staff Visibility), allowing you to take advantage of this powerful workflow tool in both the full score and Score Subsets.

Creating a Score Subset is fast. Much like the recently released Make into Part feature, Sibelius quickly creates the subset and automatically labels it “Score Subset 1.” To rename the subset on your Windows or Mac computer, select File > Score Info and set the “Part name” to something appropriate. In my case, I’ve created a Score Subset for woodwind sectional rehearsal: 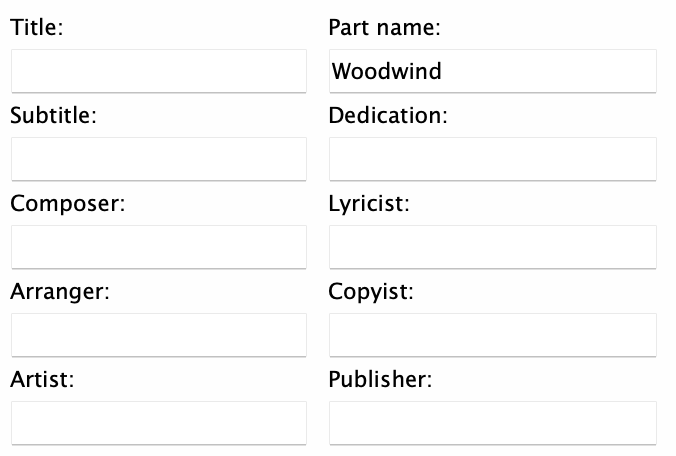 On both mobile device and desktop, you can edit the hidden name in the top-right corner of the first page of music.

To switch between your full score and subsets on desktop, you can access the subsets from the “+” menu in the top-right part of the document tab bar below the ribbon:

On your mobile device, there are two ways to find your subsets. You can either go to the More … menu and choose Score / Parts or you can navigate to the subsets in the same way as you find the parts—by doing a long-press on the score name and sliding left or right:

There are several use cases for Score Subsets that allow you to work more efficiently, with more coming in the future as we expand this feature. It’s important to note that if you need to override something in the score, use a Dynamic Part; otherwise, use a subset.

Sketch/scratch staves—This is common when working with incoming imported MIDI files—either by selecting File > Open or File > Import. When splitting and combining incoming parts for orchestration, it’s now possible to retain all the original staves in the “Full Score” with a Score Subset that contains the instruments for the conductor’s score. You can then always go back to refer to the original source material, and you’ll never have to delete a stave again.

One manuscript template to rule them all—Naturally, you can save Score Subsets into manuscript papers too, so you have them all ready to go when you start a new score. As you can create a subset at time, you could also create a manuscript paper with all your possible instruments, groupings, brackets, and staff names all set up and then pull these staves into your conductor's score when you have a need for them.

Rehearse and teach on the fly—As the band leader, wouldn’t it be nifty to be able to call up just the brass parts and rehearse them on their own? Now with a few taps, it’s possible. It’s particularly useful on Sibelius for mobile, where you can simply make a selection, switch to the subset you need, and Sibelius will keep the selection in view, making sure you don’t lose your place. You have the sectional Score Subsets ready to go for any moment in your rehearsal.

Kudos to the Sibelius engineering team who have brought Score Subsets to Sibelius. Sibelius is now just as fast with any size score, with or without several subsets.

You can have as many Score Subsets as you like. Managing these is as easy as managing Dynamic Parts. To choose which staves are in the subset, select Parts > Parts & Score Subsets > Included Staves. This will show a list of staves in the subset, enabling you to add or remove staves as needed. From the same location in the Ribbon, you can delete the Score Subset entirely too. 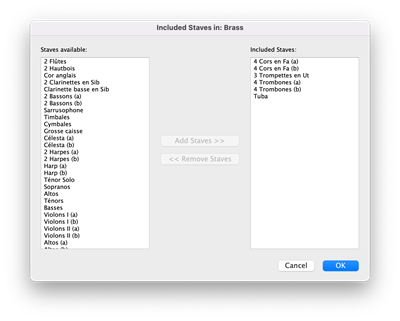 We’ve added support for printing subsets. On your computer, select File > Print and select “Print parts & Score Subsets” to reveal the list. You’ll see the subsets are conveniently at the top of the list: 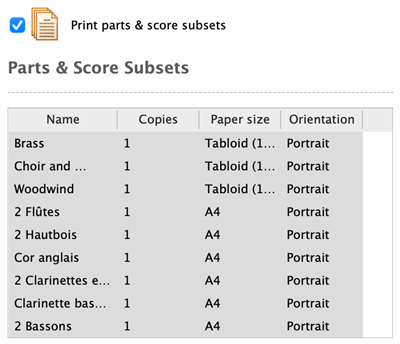 On your mobile device, navigate to the subset you’d like to print, tap the "More (…)" menu and select “Print.” You can then use the standard iOS “Print Options” dialog to export a PDF or print from there.

As with these larger architectural changes in Sibelius, we’ve bumped the internal file version to save the new Score Subsets. If you need to reopen a score saved in 2022.12 in an earlier version of Sibelius, you will have to export the score—just select File > Export > Previous Version and choose the version you need. As you would expect, when opening your exported score in an earlier version of Sibelius, the Score Subsets are stripped out. For the new barlines, (see below), thick barlines are converted to double barlines, triple barlines are also converted to double, and dotted barlines are converted to dashed barlines.

Since Score Subsets are quite advanced features, you will need Sibelius Ultimate to create them. If you’re using Sibelius First or Artist, you can open files that already contain subsets, but you cannot create them from scratch.

As with all features we add to Sibelius, we aim to make them available to our ManuScript plugin language, enabling you to access the feature programatically. The commandID for creating a Score Subset is make_into_score_subset, and the one for deleting a subset is delete_current_part_or_subset. This latter command can also be used to delete the current part too—something that’s new to this release as well.

It’s been a very long time since we added new types of barlines, so it’s high time we added three more—dotted, thick, and triple! We’ve expanded the control in Engraving Rules too, enabling you to have full control of these new barlines, plus repeats too. The three new barlines are available in both Sibelius Artist and Sibelius Ultimate but not Sibelius First. The new Engraving Rules controls are available in Sibelius Ultimate only. Sibelius First users will be pleased to hear we have added the Dashed barline to the Barlines gallery in that tier.

To add these new barlines to a score, on your computer, select Notations > Common > Barline and choose what you want from the menu. On your mobile device, tap the “+” menu, select “Barlines,” and do the same: 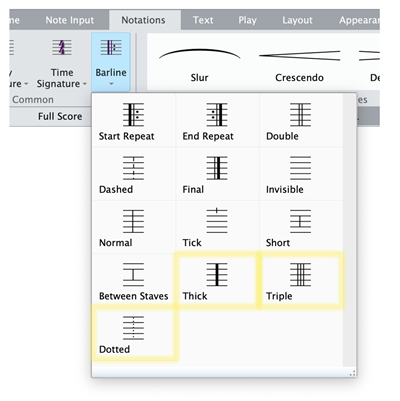 The three new barlines are: 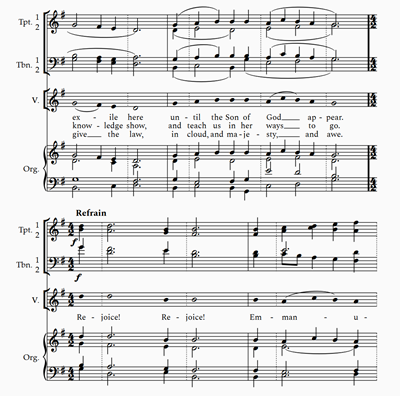 An example of dotted and thick barlines in practice.

Within the new Engraving Rules page, we’ve added two new options for repeat barlines. They are:

The standard option for repeats.

We also reorganized the Barlines page of the Engraving Rules dialog, enabling you to choose the new types of barlines as default, and set the width and other spacing options for each type. You can also set the new options for repeat barlines too.

We’re proud to always keep the Sibelius engine up to date under the hood, so qualifying Sibelius on the latest version of macOS has been easy. You’ll find that Sibelius 2022.12 runs really well on any modern Mac running macOS Ventura.

A release of Sibelius wouldn’t be complete without a collection of other improvements, and this update is no different.

MusicXML import—In our release last month, we introduced MusicXML import to our mobile app. When we did this, we updated the MusicXML schema from version 3.1 to 4.0. No other changes were made to the way these files are imported though.

Stability—Sibelius no longer crashes when importing a score via File > Import that uses various playing techniques.

Accessibility—On Mac, we’ve fixed an accessibility bug where the navigation commands would loop some types of information when using a screen reader.

Licensing improvements—We’re constantly tweaking our licensing, and you’ll see more in the coming months too. Along with this Sibelius update, we’re including the latest version of Avid Link as well, which includes some useful enhancements to how licenses are managed.

And that’s it, folks! Thanks so much for getting this far. We’re really proud of this release, and we can’t wait to see how you get on. Wishing you a happy, peaceful, and music-filled holiday season.