With the new Dolby Atmos Renderer 3.5, you now get an even better binaural headphone experience that lets you create in Dolby Atmos from anywhere, so you can start creating and releasing today. Unlike 2012 when creating in Dolby Atmos would have required a large mixing stage, you can now create Dolby Atmos mixes via headphones with your Pro Tools | Ultimate setup and the Dolby Atmos Production Suite.

Dolby Atmos has earned its place as the premiere immersive audio experience in theatres and studios with very large speaker installations, and the CE industry has continued to deliver Dolby Atmos to consumers via home installations that make more use of upward firing speakers and virtualization. This has allowed Dolby Atmos to be experienced on all types of consumer entertainment devices, right down to the release of the highly capable Amazon Echo Studio smart speaker in 2019. 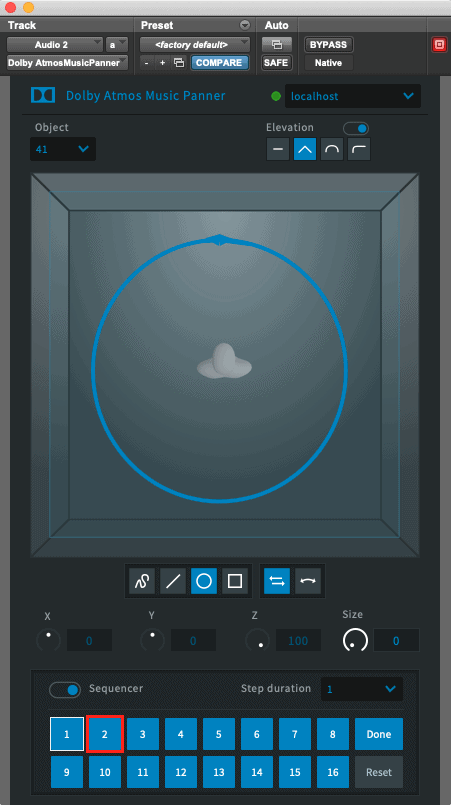 In the last few years Dolby has been putting a lot of work into its binaural rendering, starting with work in Virtual Reality as its first commercial endeavor. During that time, a dedicated panner was used not only to set the location information for an object, but also one of three render modes: “Off” which allowed for straight stereo renderings of the object, “Near” which allowed for objects to be externalized in such a way that they felt close by, and “Far” which allowed for rendering of sounds to be more on the speaker cone of a virtual environment. These modes allowed a user to select how a listener might perceive the sound to be played back when using headphones. Now those controls are built directly into the Dolby Atmos Renderer and can be controlled from an AAX Plugin. 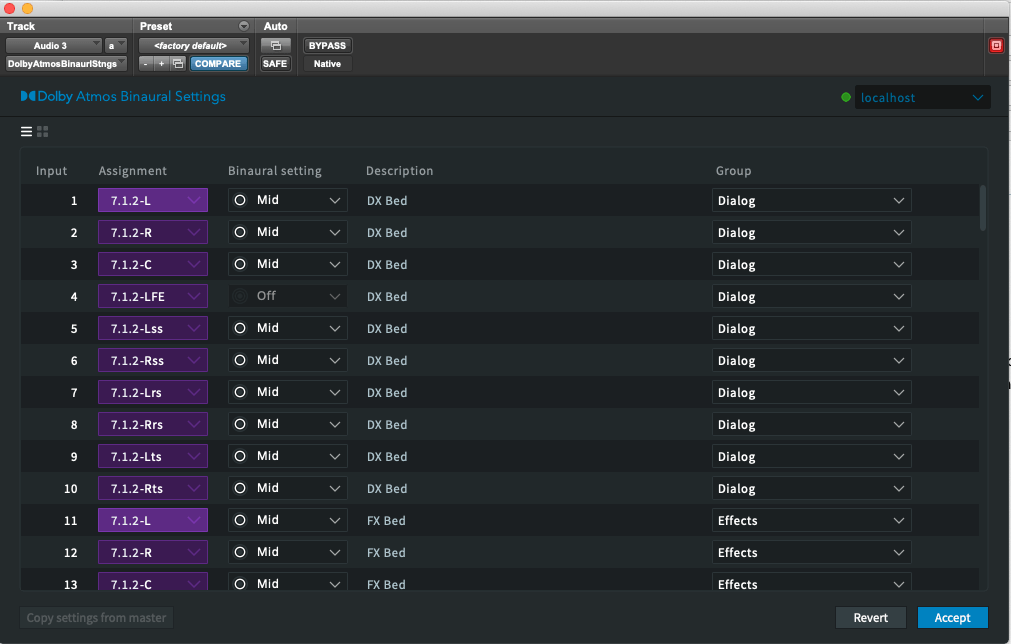 Dolby Atmos Binaural has two elements. The first is a “head model.” The “head model” is generic, in that it is an average which captures a wide range of listeners physical characteristics so that more listeners can have a good experience. The second are the render modes described previously. These two elements, when combined together, allow a creative to virtually position and control the playback of sounds over headphones without affecting the speaker playback in any way. In the latest version of the renderer (v3.5), these models have been improved upon to greatly increase the resolution and reproduction of the Dolby Atmos experience on headphones.

What headphones do I need?

Any headphones should be capable of receiving this experience because the rendering to two channels is occurring in the Dolby Atmos Renderer. However, we recommend using wired headphones versus Bluetooth.

Do I need to create a separate headphone mix?

No, as the metadata associated with the mix has allowed a large catalog of music releases to be created that play over speakers and headphones without needing two separate mixes. The metadata is used by the encoders to create the deliverables for the respective playback devices. Today the AC4-IMS codec is used by Tidal HiFi on Android devices to give a Dolby Atmos Binaural experience.

What do I need then?

You need Pro Tools | Ultimate and the Dolby Atmos Renderer to be able to mix and monitor all of the different formats and use the more advanced features, like re-renders and binaural monitoring. Alongside the introduction of the Dolby Atmos Renderer 3.5, Dolby also introduced the free Binaural Settings Plugin, which should be hosted in your DAW’s session file. This plugin allows you to define the binaural render modes of the audio channels in your Dolby Atmos session from inside the plugin, offering easy and consistent recall of the metadata. This will then be included when bouncing to the BWAV ADM needed for delivery.

By default, every channel of a Dolby Atmos mix will use the “Mid” setting for binaural rendering. This ensures that every mix has the capability to be encoded and played back with a binaural experience. The ability to set Binaural Render Modes allows you, the creator, to define that experience for your listeners.

In the music world a “mullet” layout has become popular for many mixers; that is “Near” at the front (L C R), “Mid” for sides (Lss Rss), and “Far” for overheads and rears (Lt, Rt, Lsr, Rsr). This layout is for the bed channels. Beyond that, rhythmic elements are often set to “Near” mode, pads will be found in the ethereal “Far” mode, etc. These are by no means hard and fast rules, and experimentation is encouraged.

A soloist in an orchestra, for example, may benefit more from being set to “Far” mode to allow the room model to do a little more work, instead of being more present in “Near” mode. Similarly, mixing and matching render modes for objects in the same location can provide a sense of depth when listening on headphones.

Before you distribute your finished mixes via AvidPlay, we still recommend listening to your mixes in a speaker-based environment, whether this is in a mixing room with Dolby Atmos speakers or just checking your final mix on consumer systems with an MP4 exported from the Dolby Atmos Renderer.